Following his death in 1799, George Washington seemed “above the clouds,” to paraphrase the general’s most popular biographer, Mason Locke Weems. The glorification of Washington continued for more than a century, culminating in the romanticized and popular history paintings of the Philadelphia artist Jean Leon Gerome Ferris (1863–1930). These canvases present a remarkably appealing and virtuous figure but provide limited reliable information about the “Father” of our country. This show presents 13 original paintings by Ferris along with 17 historical records that reveal facts about Washington’s actual life. These letters, surveys, maps, and farm records reintroduce the actual man.

“Lighthorse Harry” Lee famously eulogized that Washington was “first in war, first in peace, and first in the hearts of his countrymen. . . . The purity of his private character gave effulgence to his public virtues.” Washington: The Myths and the Man focuses on Washington’s private life at Mount Vernon to reveal what motivated Washington the public servant. 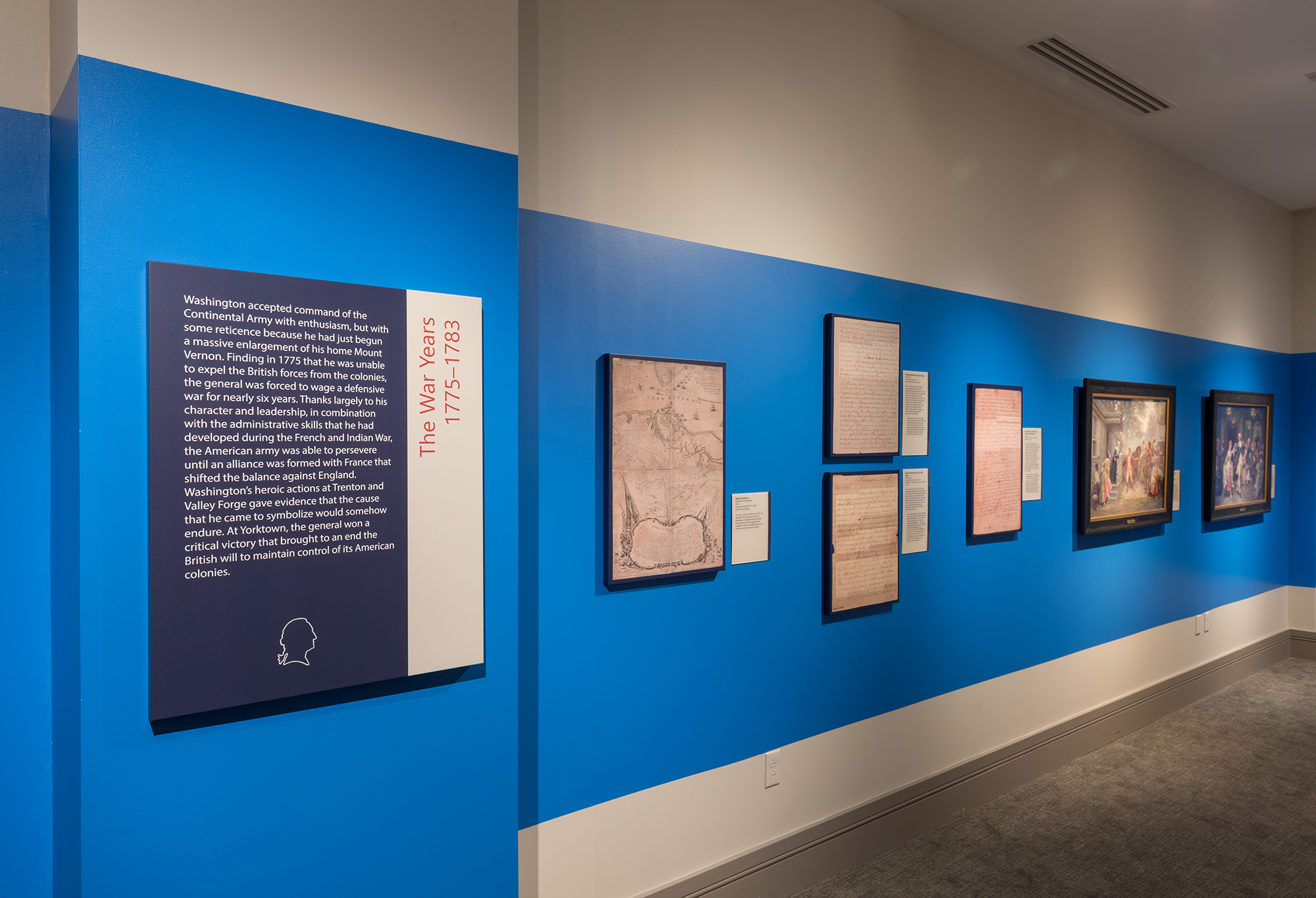 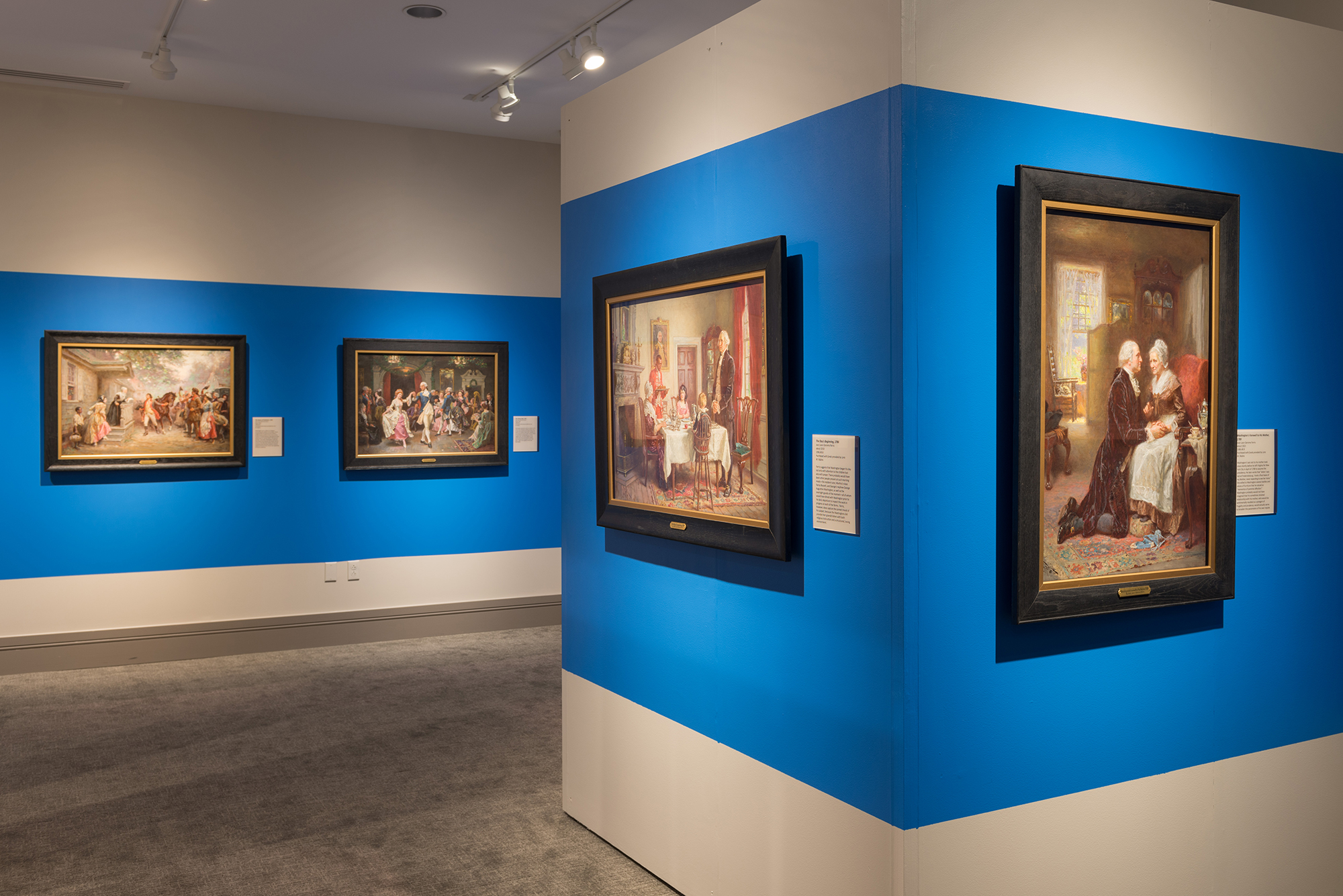 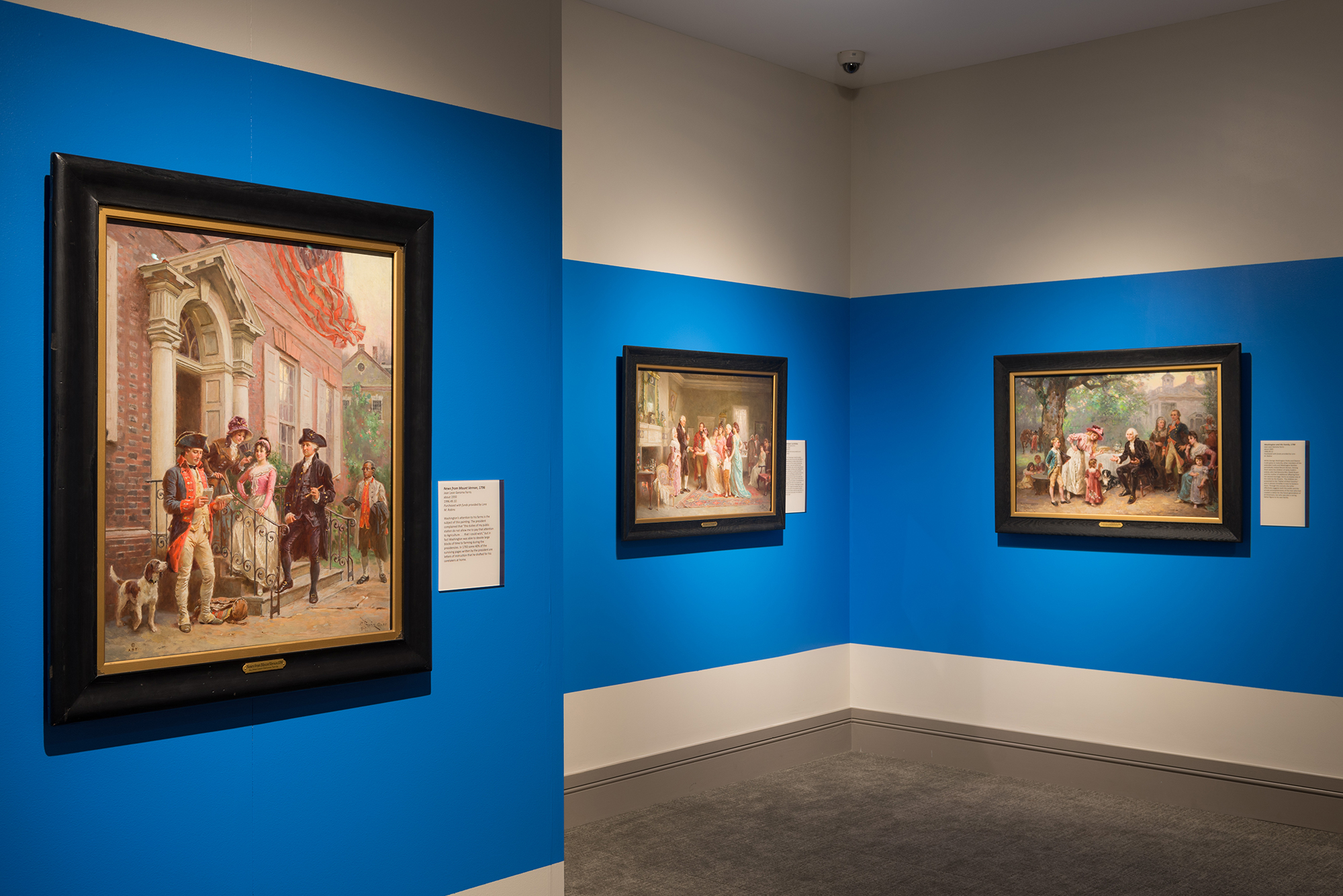 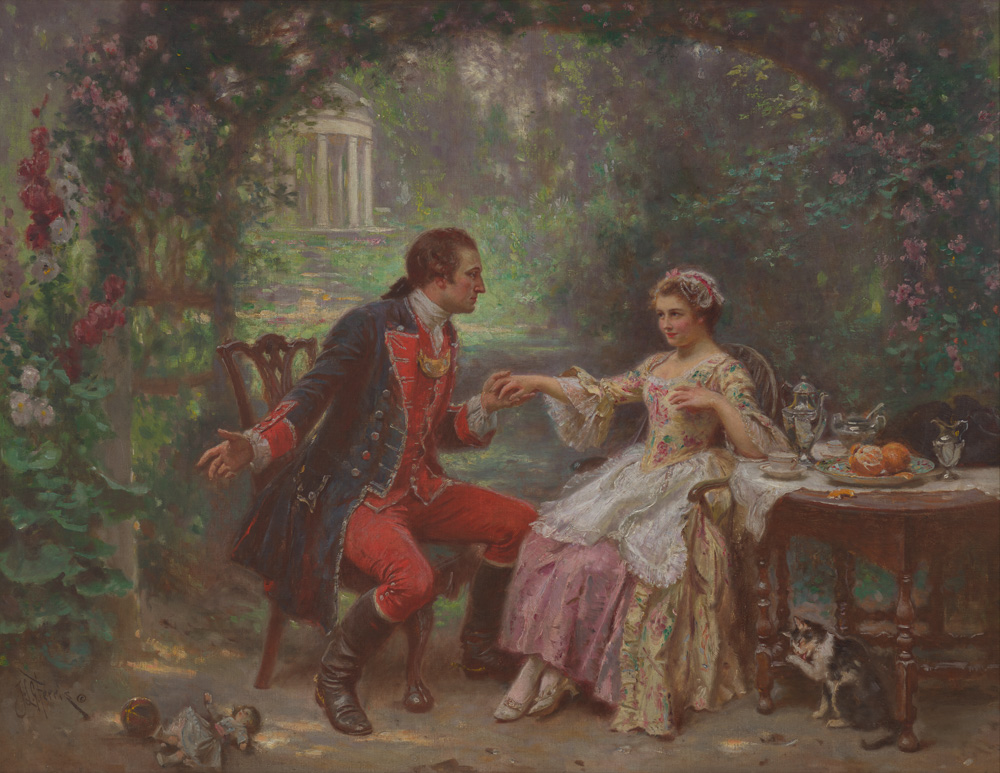 In 1758, Martha Custis was a 27-year-old-widow who only recently had lost her husband, two of her four young children, and her father. Accordingly, her courtship by Washington was probably guided by propriety. Ferris, however, saw it as a great romance; he presents Martha as a vibrant young woman totally enthralled by the handsome and gallant officer who courts her.
Image 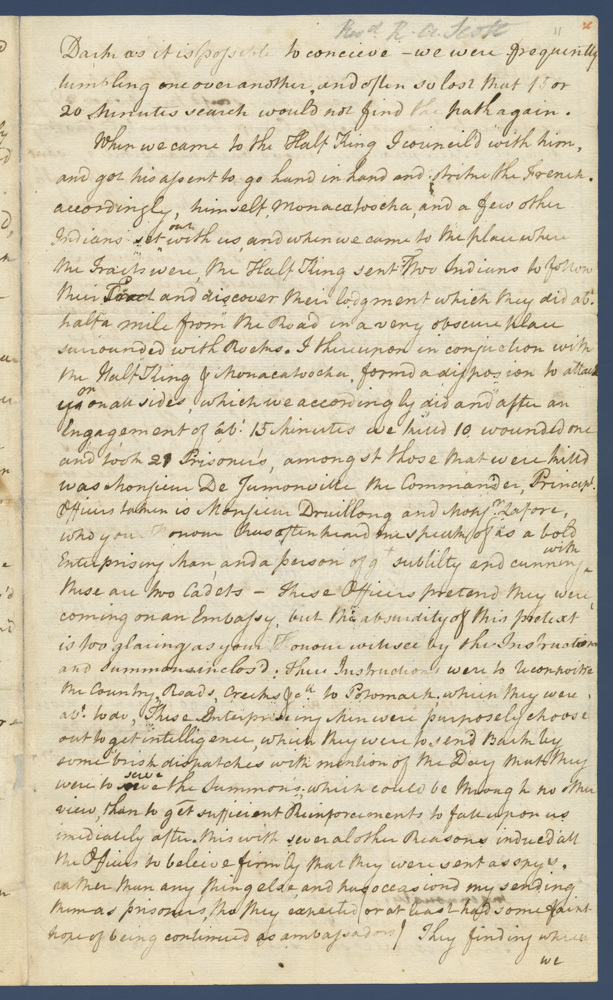 To counter an anticipated massive French incursion into the Ohio in 1755, the British crown authorized Governor Dinwiddie to build an army. Washington soon became its commander. In an early engagement, his force attacked a French party and killed its commanding officer. On the fifth page of this letter Washington acknowledges the incident. This skirmish initiated the French and Indian War, which became known internationally as the Seven Years’ War.
Image 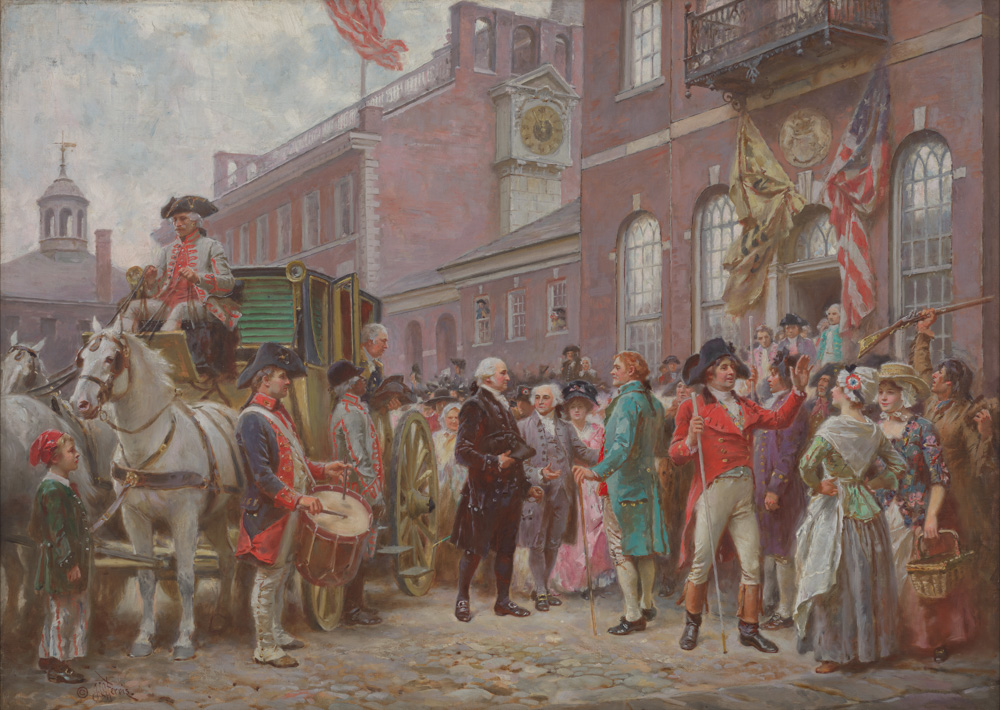 Ferris celebrates the public approval that Washington had earned by the start of his second term. In this recreated scene, the president is depicted beside Vice President John Adams, Secretary of State Thomas Jefferson, and Secretary of War Henry Knox (who exits the coach). With Alexander Hamilton, these advisors formed a somewhat incompatible conclave that only Washington had the power and influence to control. Appropriately, the president is shown to have stepped from a carriage that might have carried a king, and the entire setting is one of affluence. The president and many of his supporters advocated a powerful central government that would protect the lifestyles of the wealthiest of their constituents. They had no intention of overturning the oligarchy of wealth and talent that Washington, on the model of the Virginia colony, had brought to the government.
Image 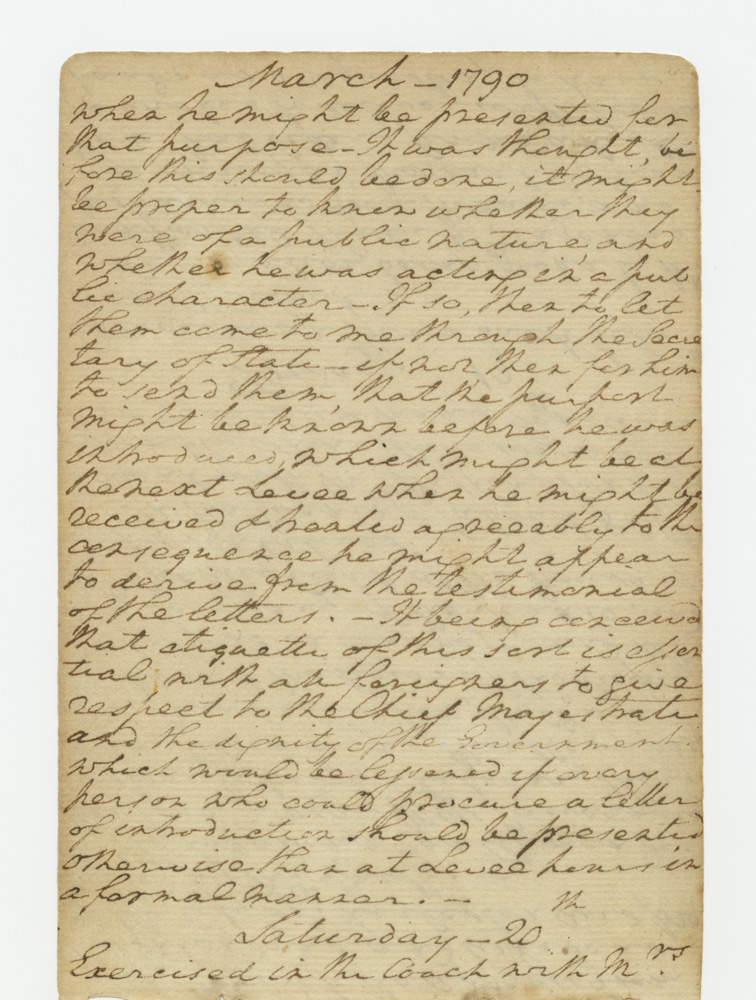 Washington kept this diary during his first presidency, when the newly designed American government was put into operation. It provides some indication as to the issues that consumed his time. One question that continuously confronted him was how to receive foreign visitors. If the purpose was private business, he would have the visitor send letters in advance. If they arrived on state business, Washington suggested a different plan.
Image 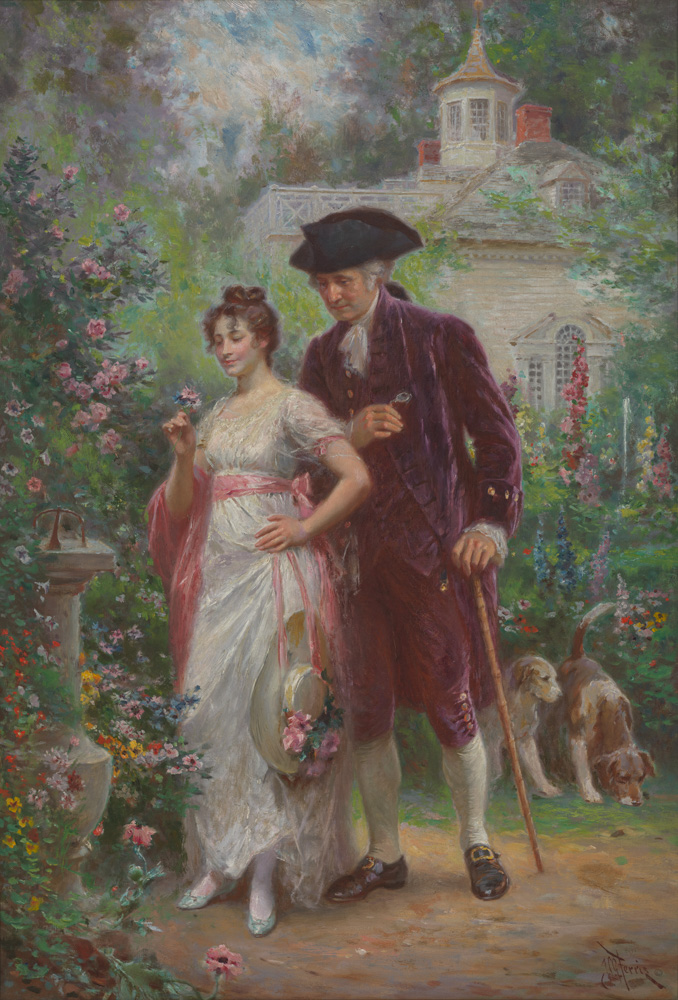 The Virginia gentry since the seventeenth century had quoted 1 Kings when they described life under their “vine and fig tree.” This reaffirmed for them the desirability of their plantation existence. Here, Washington is shown enjoying the retirement that is the fruit of his long labors. Ferris suggests the affectionate relationship between Washington and Nelly Custis, a daughter of his deceased stepson Jacky Custis. The artist reminds his viewers that wherever Washington turned his paternal gaze he was able to bring the entity in question—his family, his plantings, and his nation—to their successful maturity.
Image 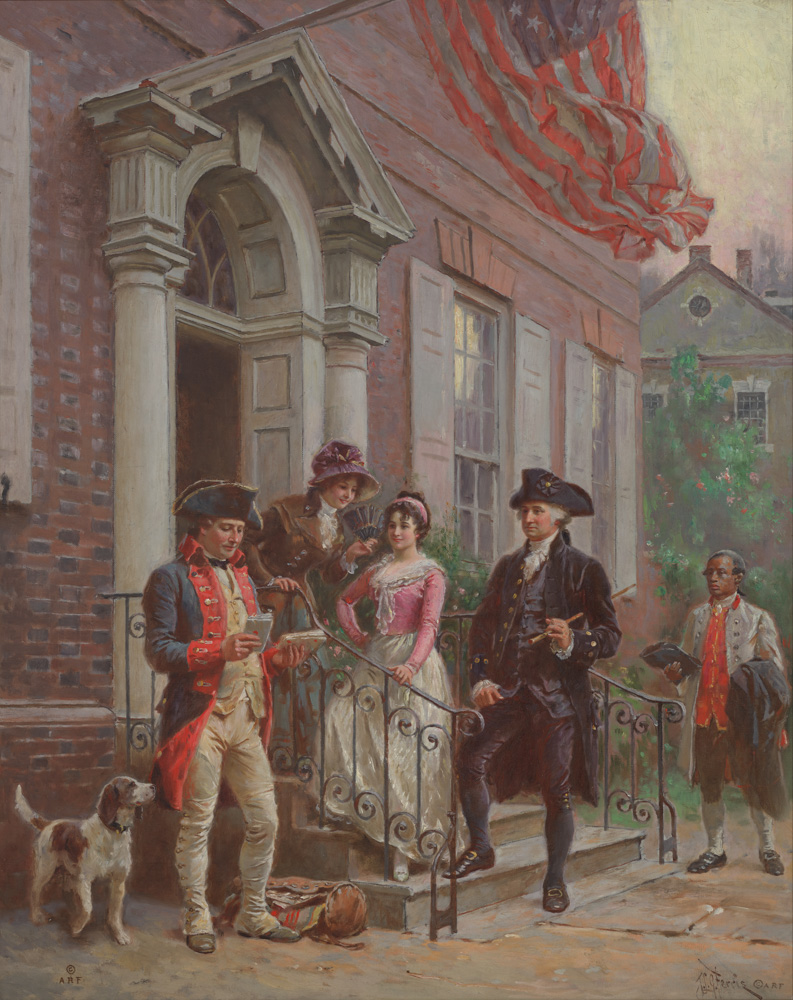 Washington complained that “the duties of my public station do not allow me to pay that attention to Agriculture... that I could wish,” but in fact he was able to devote large blocks of time to farming during his presidency. In 1793 some 40% of the surviving pages written by the president are letters of instruction that he drafted for his caretakers at home.
Image 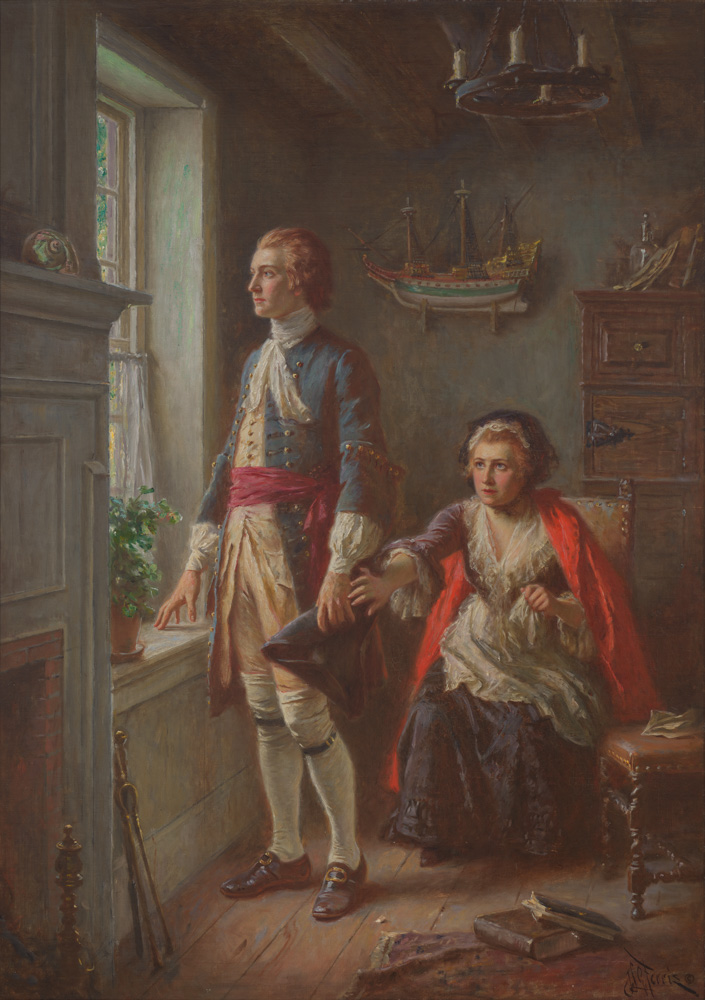 The example of his brother’s service under Admiral Vernon nearly led George Washington to go to sea at age fourteen; his mother, however, opposed the idea. Ferris valued the incident because he felt that it determined the course of history. In his notes he argues that the Revolutionary War would have been lost if Washington’s determined mother had not steered him at this moment from what would have been the wrong path.
Image 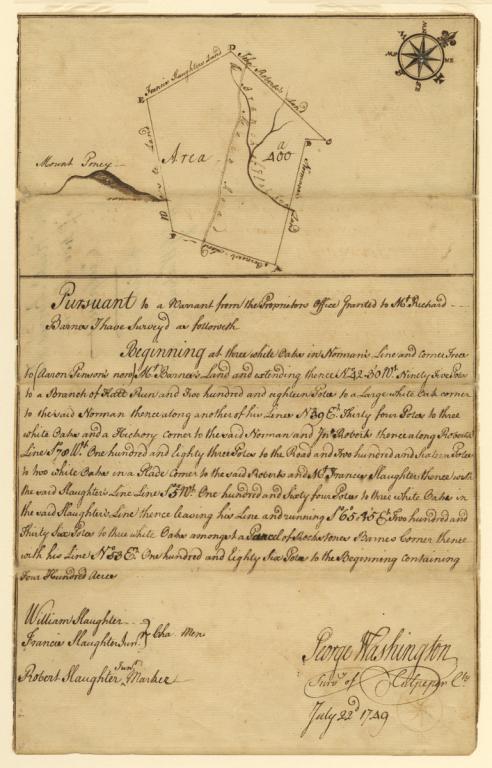