Conclusion - Did the Civil War End at Appomattox?

Conclusion - Did the Civil War End at Appomattox?

Lee’s army had become the embodiment of Confederate nationalism, and after its surrender other southern forces soon gave up.

The Virginia landscape—scarred by empty fortifications, decimated forests, ruined homes and farms, and vast graveyards—recovered in a generation. More enduring was widespread poverty and the emotional scars of defeat, occupation, and subjugation felt by whites and the horrors of slavery remembered by blacks.

Freedom as Confederate independence failed, but the Confederate commemoration continues to this day in the South. Although black Virginians were no longer enslaved, equality remained an unfulfilled goal for nearly a century. Despite the additions of amendments to the U.S. Constitution, equal opportunity was denied until the Civil Rights Movement of the 1950s and ‘60s forced meaningful change. White southern identity that had been based on racial supremacy finally disappeared. The successes of the Civil Rights Movement made possible the election in 2008 of the first African American president.

Words to Live By

All of Robert E. Lee’s orders, telegraphs, letters, and reports were copied by his staff into bound books. Taken from the Army of Northern Virginia “order” book, this copy of General Order No. 9 is, perhaps, the earliest recorded copy of Lee’s dignified farewell to his army: 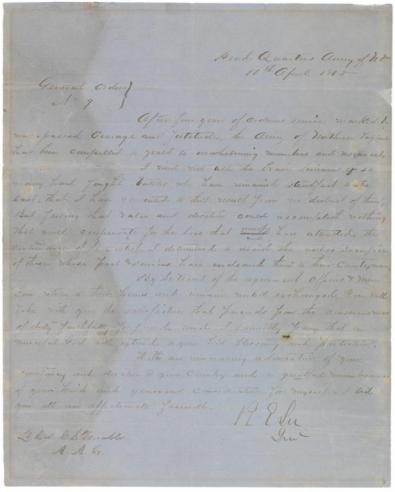 "After four years of arduous service marked by unsurpassed courage and fortitude, the Army of Northern Virginia has been compelled to yield to overwhelming numbers and resources.

I need not tell the brave survivors of so many hard fought battles who have remained steadfast to the last that I have consented to this result from no distrust of them. But feeling that valor and devotion could accomplish nothing that would compensate for the loss that would have attended the continuance of the contest, I determined to avoid the useless sacrifice of those whose past services have endeared them to their Countrymen.

By the terms of the Agreement officers and men can return to their homes and remain there until exchanged. You will take with you the satisfaction that proceeds from the consciousness of duty faithfully performed, and I earnestly pray that a Merciful God will extend to you his blessing and protection.

With an unceasing admiration of your constancy and devotion to your country and a grateful remembrance of your kind and generous consideration for myself, I bid you all an affectionate farewell."

Before leaving for home, Confederate soldiers received passes granting them safe passage through the lines. In return, they promised not to take up arms against the United States. Approximately 28,231 paroles were issued at Appomattox Court House. This one was given to Corporal Richardson Wallace Haw of Company I of the 15th Virginia Infantry.

Outward Signs for an Invisible State

“Hair is the most delicate and lasting of our materials, and survives us, like love. With a lock of hair we may almost look up to Heaven and almost say, I have a piece of thee here.” - Godey’s Lady’s Book, December 1850 In the nineteenth century, respectable Americans, or those who aspired to be so, observed formal periods of mourning after the death of a spouse or relative. In the South, where nearly one in five white men of military age perished in the war, death was omnipresent—and so became the ritual of mourning. Many women cut a lock of a relative’s hair before they left for war. If their loved one died, the hair could be made into a piece of memorial jewelry or, in this case, placed in a locket or brooch. Although this may be shocking or upsetting to modern sensibilities, these objects gave comfort to those the dead left behind.

The physical devastation wrought by the war in Virginia was enormous: burned or plundered homes, untold losses in crops and farm animals, and neglected roads and ruined bridges. Slaves, the state’s single greatest source of wealth, were no longer property. 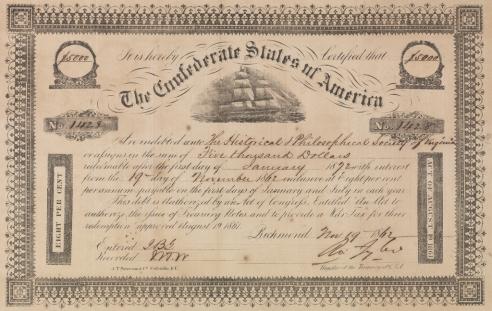 In November 1862, the executive committee of the thirty-year-old Virginia Historical Society (VHS) transferred their monetary assets from stocks yielding a 6–percent return to Confederate State Certificates that yielded 8 percent. The society ultimately invested $9,000 in the Confederate cause.

Evicted from its Richmond offices by the War Department, the VHS became another refugee of the war. Books, manuscripts, and artifacts were stored in various locations, including its members’ homes. Like many Virginians, the society lost much during the war–including all of its investments–and soon thereafter began the process of rebuilding.

Aftermath is the concluding video for the VHS blockbuster show, An American Turning Point: The Civil War in Virginia.

At a time when most nations were ruled by kings, the American Civil War resolved that a government "of the people, by the people, for the people" could endure.

During the past 150 years, the United States has grown into one of the most powerful nations in the world. Ours is a complex history marked at times by brutality, inequality, and injustice, but also by compassion, creativity, courage, and sacrifice.

It is a story shared by all Americans as we endeavor to achieve the principles upon which the nation was founded.