Getting the Message Out: Presidential Campaign Memorabilia from the Collection of Allen A. Frey

This section contains information and memorabilia on the elections from 1789 to 1828. Scroll down the page to learn more about specific election years.

In this first election there was no official nomination. George Washington was held in such high esteem by the other Founding Fathers and was so popular that there were no serious rivals to his election. He did not campaign for the office or give speeches on his own behalf. Every elector cast a vote for Washington (69

votes). To avoid a tie for the presidency, the second vote was split among eleven other potential candidates. With the next highest total (34 votes), John Adams became vice president. Thus, in the first test of the Electoral College, George Washington was chosen as the first U.S. President and inaugurated in New York City on April 30, 1789. Virginia cast its 10 electoral votes for George Washington. 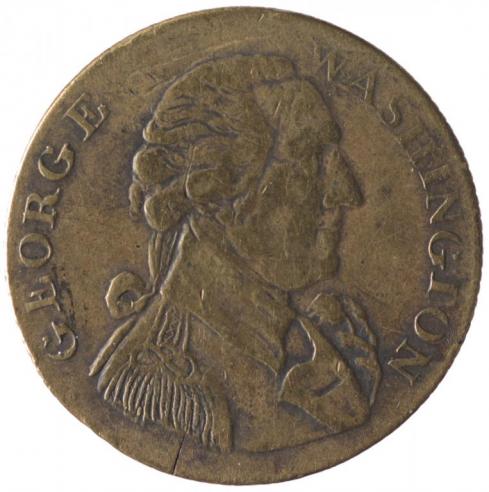 Many agreed that George Washington’s reelection was essential to the stability of the new nation. Although he had initially planned to retire, he agreed to serve another term. Again, there was no campaign, and Washington was elected unanimously, receiving 132 electoral votes. John Adams came in second with 77 votes, followed by George Clinton with 50 votes. There were now fifteen states, and all participated. Electors were chosen by state legislatures in nine states and by popular vote in the other six. The friction between the developing political parties intensified during Washington’s second administration. When Washington declined to run for a third term the election of 1796 marked the first real contest for the presidency. Virginia cast its 21 electoral votes for George Washington. 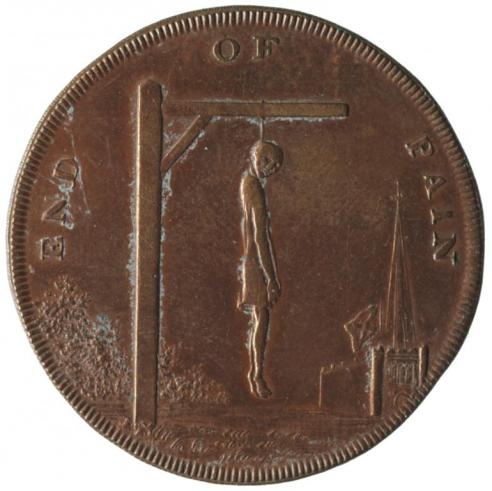 The friction between the developing political parties, the Federalists and the Democratic-Republicans, intensified during Washington’s second administration. When Washington declined to run for a third term the election of 1796 marked the first real contest for the presidency. Through private letters and meetings leaders of each faction chose their candidates for the election. Federalists selected John Adams, Thomas Pinckney, and Oliver Ellsworth, while Democratic-Republicans favored Thomas Jefferson, Aaron Burr, Samuel Adams, and George Clinton. As was the custom of the time, the candidates did not actively participate or campaign on their own behalf. However, their supporters tried to influence electors (or voters in those states where a popular vote chose the electors) through partisan newspapers and pamphlets. In addition to domestic policy, the two parties differed in their view of America’s support of England and France. Jefferson, who was sympathetic to the idea of liberty in the French Revolution, was labeled by Federalists as an “anarchist” and “Jacobin” (a French political radical). John Adams, who detested the French Revolution and who favored closer economic ties with England, was attacked by Democratic-Republicans as a “monarchist” who opposed liberty.

Adams became the second president when he received 71 votes, only three more than Jefferson, who served as vice president. This was the only time that a president and vice president were from different parties. Of its 21 electoral votes, Virginia cast
20 for Jefferson and 1 for John Adams. 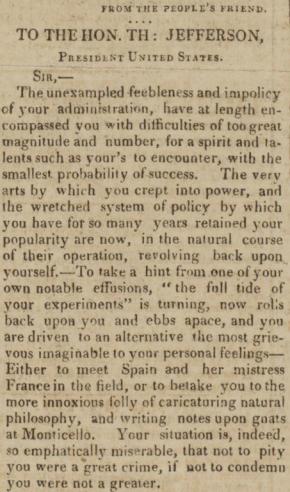 Through private letters and meetings, leaders of the two major factions, the Federalists and the Republicans, chose their candidates for the election of 1800. For the first time, congressmen for each political party met to nominate candidates. The Federalists selected John Adams and Charles Cotesworth Pinckney, while the Republicans put forward Thomas Jefferson and Aaron Burr. The candidates remained outwardly aloof but relied on partisan newspapers, pamphlets, and personal letters to obtain support. Activists of opposing parties often used vehement name calling and smear tactics against Adams and Jefferson. The Constitution did not distinguish between candidates for the presidency and vice presidency. As a result, when each Democratic-Republican elector cast his two votes for Jefferson and Burr, the result was a tie (each man got 73 votes). John Adams received 65 votes and Pinckney 64. For the first time, the House of Representatives was called upon to decide a presidential election. After 35 ballots, however, it still had not chosen a president. Finally, Federalist Alexander Hamilton, detesting Burr more, used his influence to support Jefferson, who won the election and became the third president.

This election marked the first peaceful transfer of power from one party to another. It also resulted in the Twelfth Amendment to the Constitution (ratified in 1804), which declared separate voting for presidential and vice-presidential candidates. Virginia cast its 21 electoral votes for Thomas Jefferson. 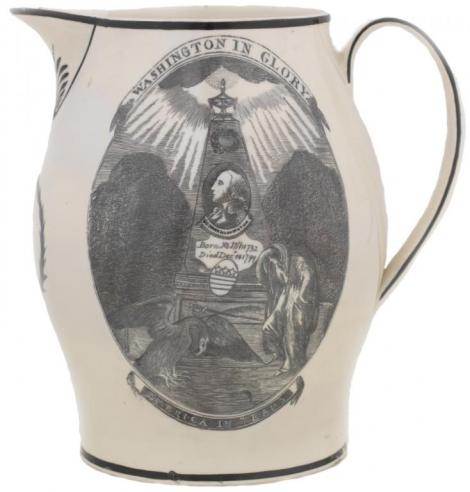 Thomas Jefferson was easily nominated by the Democratic-Republican caucus to run for a second term. With the Louisiana Purchase expanding the nation and economic prosperity at home, the resultant popularity made him difficult to beat. George Clinton replaced Aaron Burr as the vice-presidential candidate. With the retirement of John Adams and the death of Alexander Hamilton in a duel against Aaron Burr, the Federalist Party was disorganized. Without a caucus, it agreed to support Charles Cotesworth Pinckney and Rufus King. Partisan newspapers attacked the candidates. Federalists claimed the purchase of the Louisiana territory was unconstitutional. They accused Jefferson of having an enslaved lover and repeated old charges of atheism and cowardice during the Revolutionary War. Nevertheless, the Federalists could not overcome Jefferson’s popularity.

Jefferson easily defeated Pinckney by a landslide of 162 electoral votes to 14. For the first time, electors chose the president and vice-president separately. Virginia cast its 24 electoral votes for Thomas Jefferson. 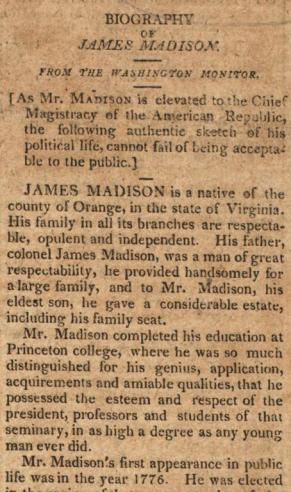 War between England and France during the two Jefferson administrations led the United States to enact the Embargo Act in 1807, which imposed economic sanctions against these countries. This proved unpopular with its own economic interest and became the main issue against Jefferson’s secretary of state, James Madison, who represented the Democratic-Republicans in the 1808 election. Again, the candidates gave no speeches on their own behalf, and the campaign was conducted primarily in the press and private writings.

Despite the growing strength of the Federalist Party, Madison and Vice President George Clinton won easily over Federalist Charles Cotesworth Pinckney and Rufus King with 122 electoral votes to 47. Virginia cast its 24 electoral votes for James Madison.

The election of 1812 was our country’s first wartime election. Attacks on American shipping, impressments of American sailors, and a desire to remove England from Canada led to the War of 1812. The conflict was the major issue of the campaign. The Federalist Party denounced the war as “Mr. Madison’s War,” and in a national convention, it nominated DeWitt Clinton seeking to gain support from disgruntled antiwar Democratic-Republicans as well. The Democratic-Republican caucus selected James Madison for reelection. Eldridge Gerry replaced George Clinton as the candidate for vice president. James Madison easily won reelection when he received 128 electoral votes to 89 for Clinton. Virginia cast its 25 electoral votes for James Madison. 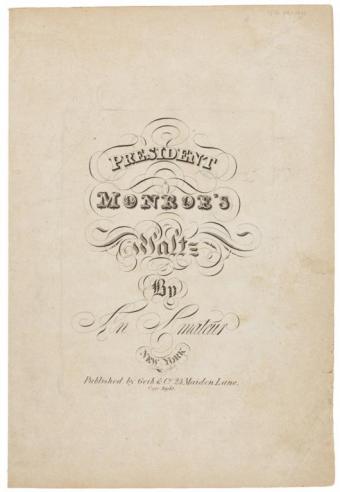 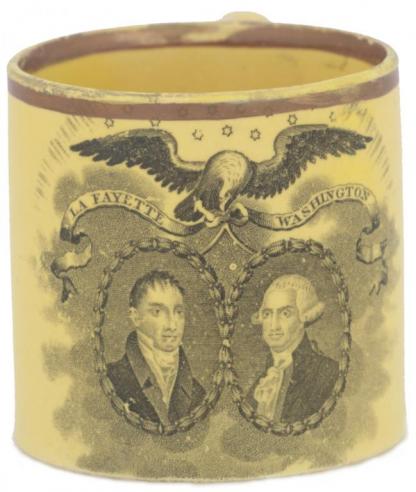 In 1820, James Monroe ran for reelection unopposed by a Federalist candidate. The only presidential candidate to do that since George Washington. The election was almost unanimous with Monroe receiving 228 or 231 electoral votes. The different totals arose because of the dispute over the validity of Missouri's 3 electoral votes, which related to the timing of its assumption of statehood. A single elector voted for John Quincy Adams, who was also a Democratic-Republican, to keep the electoral college vote from being unanimous. James Monroe was the last of the “Founding Fathers,” last of the succession of Virginians (with the exception of John Adams), and the last Revolutionary War veteran to be president. Virginia cast its 25 electoral votes for James Monroe.

In the absence of a replacement for the defunct Federalist Party, all the major candidates for the presidency in 1824 were Democratic-Republicans. Sectional differences over slavery had been temporarily solved by the Missouri Compromise of 1820, and election issues centered on individual personalities as well as regional economic interests. The candidates in the election included Secretary of State John Quincy Adams; Speaker of the 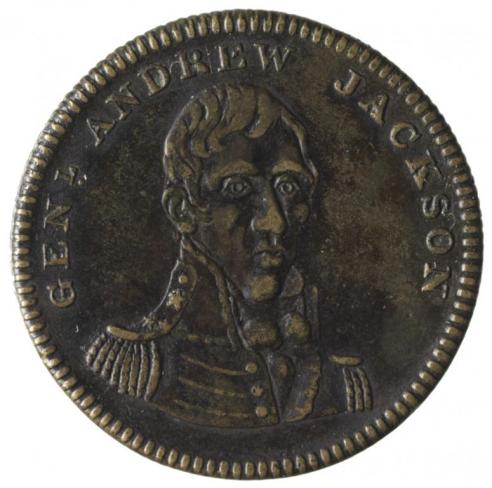 House Henry Clay; Congressman John C. Calhoun of South Carolina; Secretary of the Treasury William Crawford; and Andrew Jackson, the hero of the War of 1812. Calhoun dropped out of the race because he could not get sufficient electoral votes in the north. Crawford, who was initially the most popular and considered the early leader for the presidency, suffered a paralyzing stroke in 1823, but despite this, he was nominated by a poorly attended Democratic-Republican congressional caucus. The candidate with the least legislative experience was Jackson, but as the contest went on, he continued to gain widespread popular support. Friends of Jackson promoted him as a patriot, a national hero, and champion of the people. 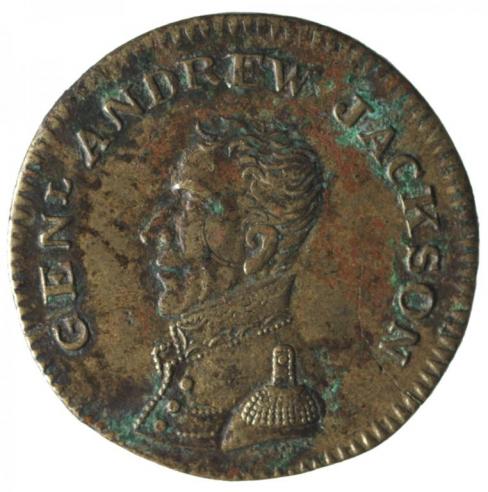 Throughout the campaign supporters of the candidates made use of published letters, newspapers, and handbills to promote their choice and vehemently attack opponents. Clay was denounced as a drunkard, Jackson was accused of murder, Adams was considered an aloof snob, and Crawford was accused of mismanaging public funds. Although Andrew Jackson received the greatest number of popular and electoral votes (99 electoral votes to 84 for Adams, 41 for Crawford, and 37 for Clay), no candidate received a majority, and once again the contest went to the House of Representatives. Under the rules of the Twelfth Amendment, Henry Clay was eliminated, as only the top three candidates were eligible. With Clay’s support, the House decided on John Quincy Adams as president. Shortly after, Henry Clay was announced as the new secretary of state. Jackson supporters were furious. They claimed that their candidate, despite having received the most popular votes, had been cheated by a “corrupt bargain” between Adams and Clay. They vowed to get even in the next election. Virginia cast its 24 electoral votes for William Crawford. 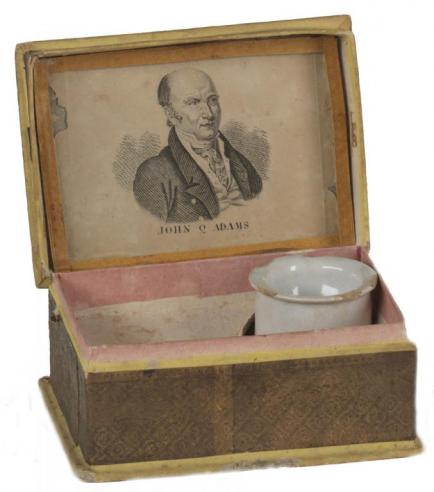 Convinced that the 1824 election had been stolen from him, Andrew Jackson and his supporters sought vindication in 1828. After the 1824 election, they began to form party organizations throughout the country. At first known as the “Jackson Party,” it eventually became the Democrats. In response, supporters of John Quincy Adams and Henry Clay organized as the National Republicans, thus giving rise to a national two-party system.

By 1828 relaxation of the voting restrictions meant that nearly all white males could vote, and because voters could cast a ballot for electors committed to their favorite candidate, it was apparent to political factions that candidates would need to advertise to attract this “common man” vote. Although this election was the first to use campaign objects to influence the voter, most campaigning centered on the personalities rather than reflecting on political issues. Both sides engaged in vehement mudslinging with distorted stories about both candidates printed in newspapers and posters. Democrats not only continued to accuse Adams of a “corrupt bargain” in the 1824 election, but they also accused him of gambling in the White House and nefarious 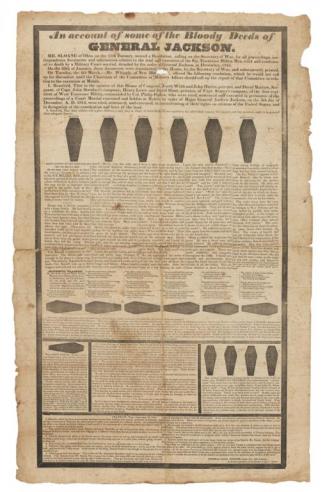 activity while a minister to Russia. Republicans accused Jackson of numerous sins including gambling, slave trading, adultery, and murder. A widely distributed broadside that featured six coffins on it, known as the “Coffin Handbill,” claimed that Jackson had six soldiers executed during the War of 1812 who had completed their service and wanted to go home but were falsely accused of desertion.

Jackson’s image and popularity, as well as his new campaign style of mixing entertainment with politics, brought him a decisive victory. Voter turnout tripled compared to the prior election. With 56 percent of the popular vote, Andrew Jackson received 178 electoral votes to 83 for Adams. Virginia cast its 24 electoral votes for Andrew Jackson.