Although integrating the nation's schools was the first priority of the civil rights movement, the denial of equal access to public accommodations affected all black people, not just students. African Americans could not use restaurants, bathrooms, water fountains, public parks, beaches, or swimming pools used by whites. They had to use separate entrances to doctor's offices and sit in separate waiting rooms. They could only sit in the balcony, or in other designated areas, of theaters. They had to ride at the back of streetcars and buses.

On July 14, 1944, Irene Morgan boarded a bus from Gloucester, Virginia, to Baltimore and was passing through Saluda when she was told she was defying Virginia's 1930 law segregating seating by rows. She refused to move and was ejected. A state court rejected her argument, but in 1946 the U.S. Supreme Court took up the case and ruled that Virginia had no right to impose segregation beyond its borders. The decision made segregation on interstate bus travel illegal. It took Rosa Parks's similar refusal in Birmingham, Alabama, in 1955 to extend the same principle to bus travel within a state.

In 1960, in Boynton v. Virginia, the Supreme Court extended the Morgan ruling to bus terminals used in interstate bus service. Nonetheless, many black people were ejected or arrested when they tried to integrate such facilities. In 1961, hundreds of volunteers from across the country traveled to the South to test compliance with the Boynton decision by riding from Washington, D.C., to New Orleans. Known collectively as the Freedom Riders, they encountered little opposition beyond words as they traveled through Virginia. Violent resistance, however, erupted elsewhere, including in Alabama, where buses were set on fire.

Students often argued that the movement should turn to nonviolent direct action in the streets rather than legal battles in courtrooms. One result of their effort were the lunch counter sit-ins, which began in 1960. Martin Luther King encouraged this "revolt against the apathy and complacency of adults in the Negro community, against Negroes in the middle class who indulge in buying cars and homes instead of taking on the great cause that will really solve their problems."

The sit-in tactic was borrowed from the labor movement, where it was used successfully in the 1930s in the auto and steel industries. Workers sat down on the job, preventing management or replacement workers from resuming production. At lunch counters, protesters—mostly black and white students—occupied seats on the principle "sit until served." They were not served, but as the seats were occupied, neither were any whites, and the businesses lost money. By the end of 1961, Woolworth's and other chain stores had desegregated their lunch counters. However, not all store owners gave in. It took the Civil Rights Act of 1964 to ban racial segregation "by businesses offering food, lodging, gasoline, or entertainment to the public." 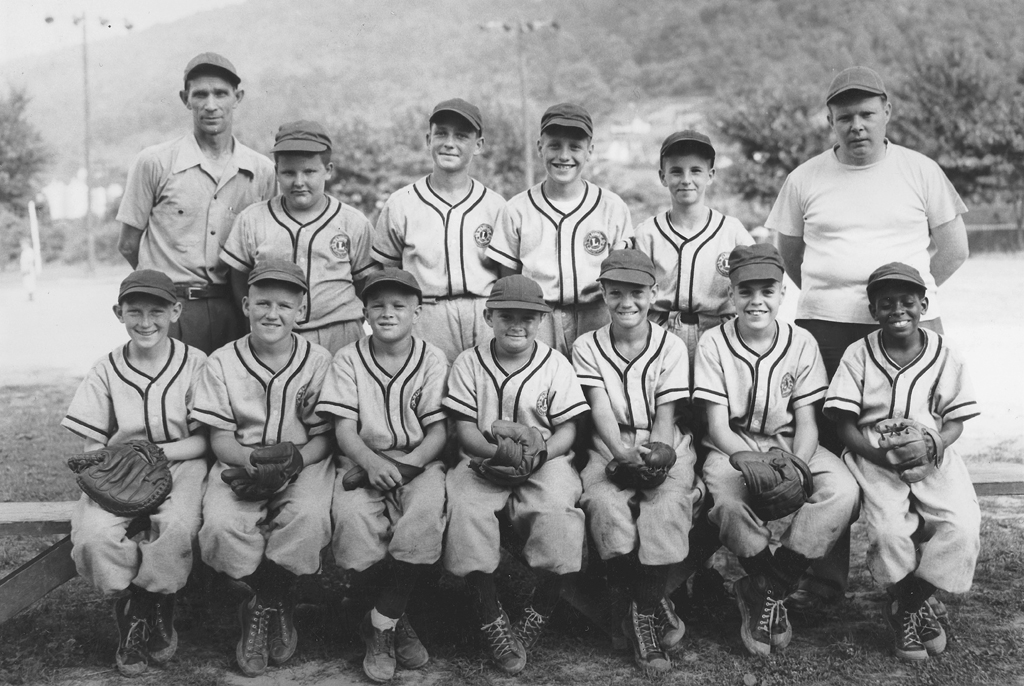 Norton All-Stars Little League baseball team, 1951
In 1951 twelve-year-old Lann Malesky and his family had recently moved to the small coal mining town of Norton in southwest Virginia. He remembers the pervasive segregation but also the excitement of playing baseball with the Norton All-Stars, a Little League team that was integrated from its inception. (Lann Malesky)
Image 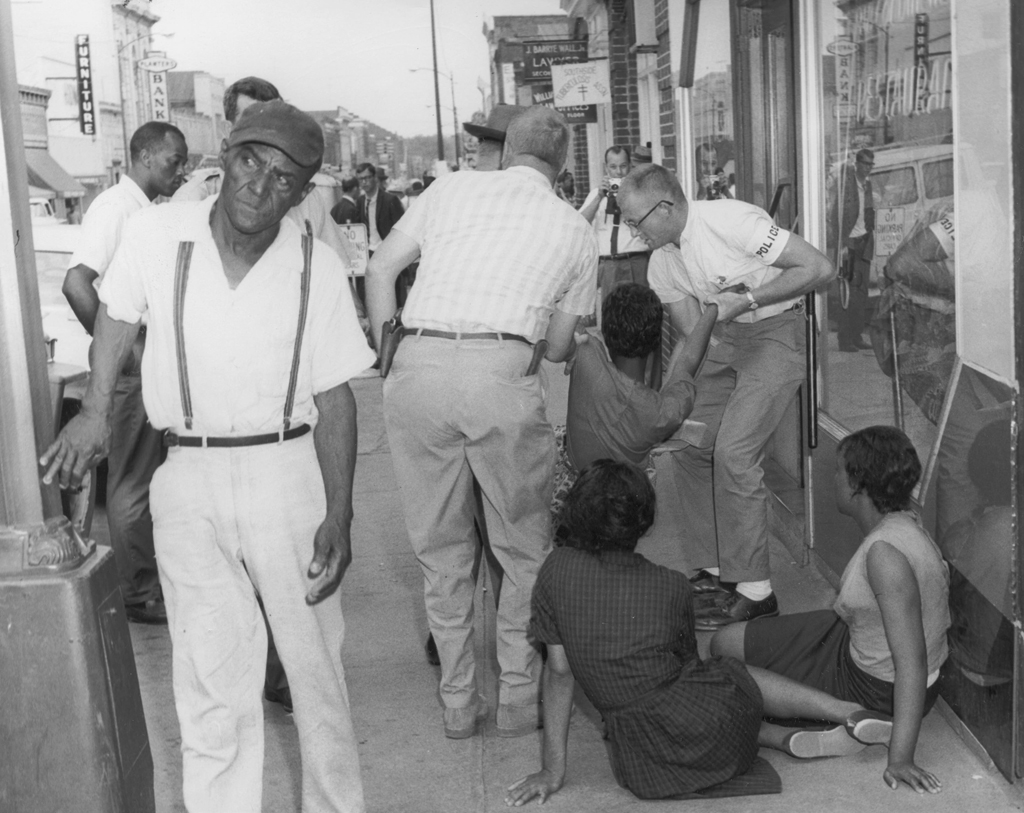 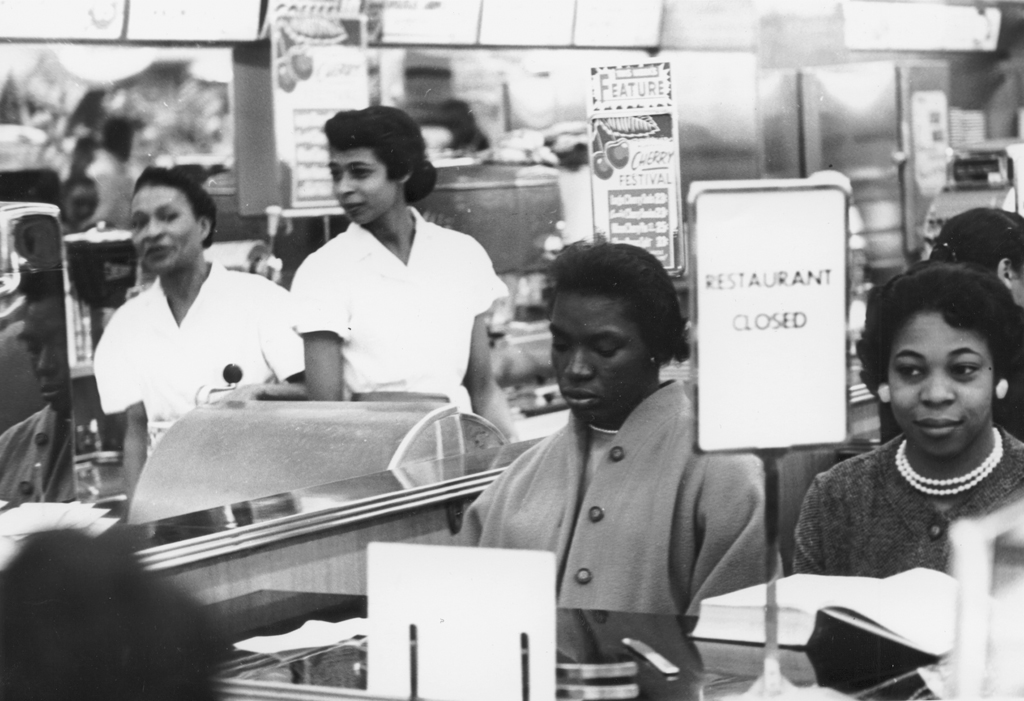 Lunch counter sit-in, Richmond, 1960
On February 20, 1960, after marching "from the campus on Lombardy Street, down Chamberlayne Avenue, to Woolworth's department store on Broad Street," a group of Virginia Union University students walked in, filled the thirty-four seats at the lunch counter, and patiently waited to be served. In response, management then closed the store. (Valentine Richmond History Center)
Image 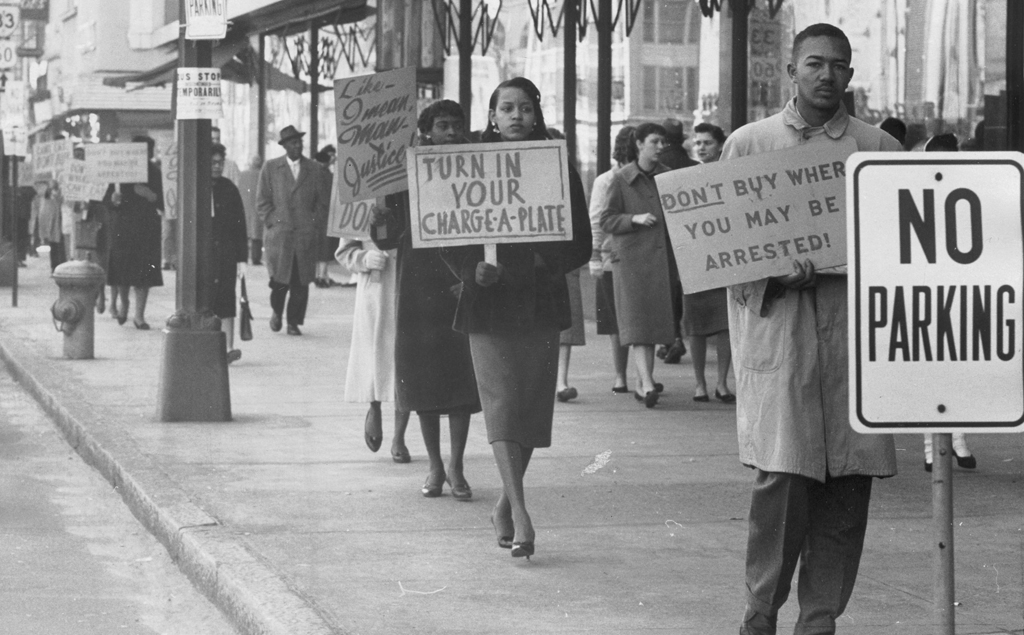 Protesting department stores in Richmond, 1960
In 1960 African Americans picketed both Thalhimers and Miller and Rhoads, Richmond's leading department stores. Picketers encouraged patrons to engage in "selective buying," which was essentially a boycott of the store. (Valentine Richmond History Center)
Image 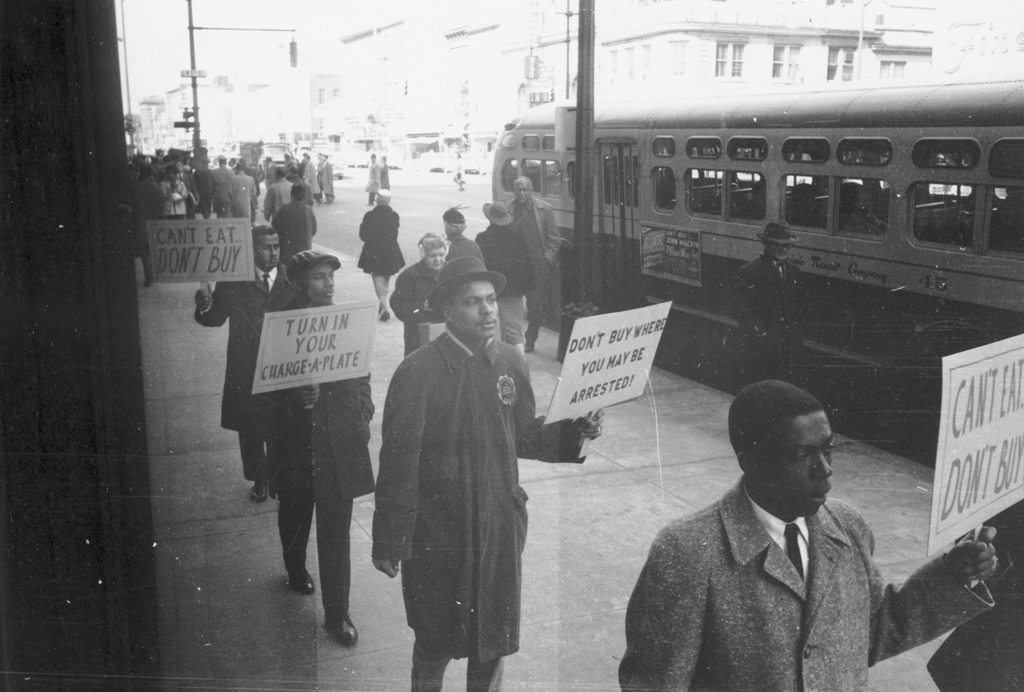 Protesting in Richmond
Picketers outside Thalhimers Department Store in Richmond urged blacks not to buy at a store that denied them the right to eat at its restaurants. (Valentine Richmond History Center)
Image 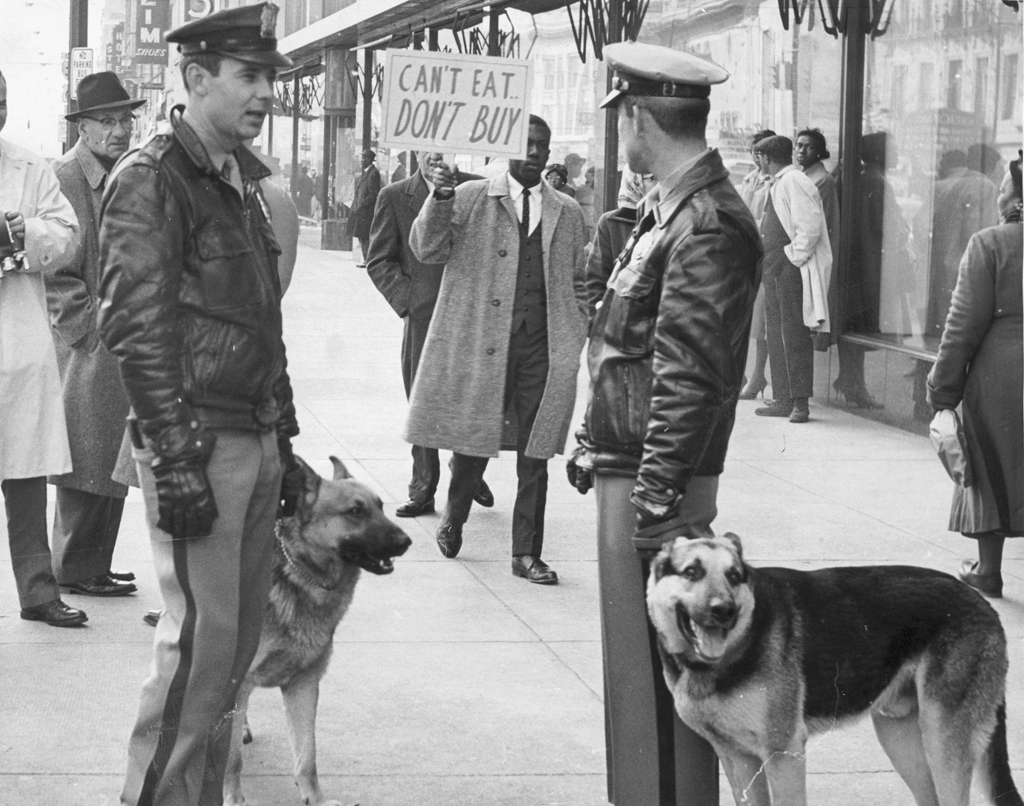 Police with dogs at a Richmond demonstration
Policemen monitored the demonstration outside Thalhimers Department Store in Richmond. (Richmond Times-Dispatch)
Image 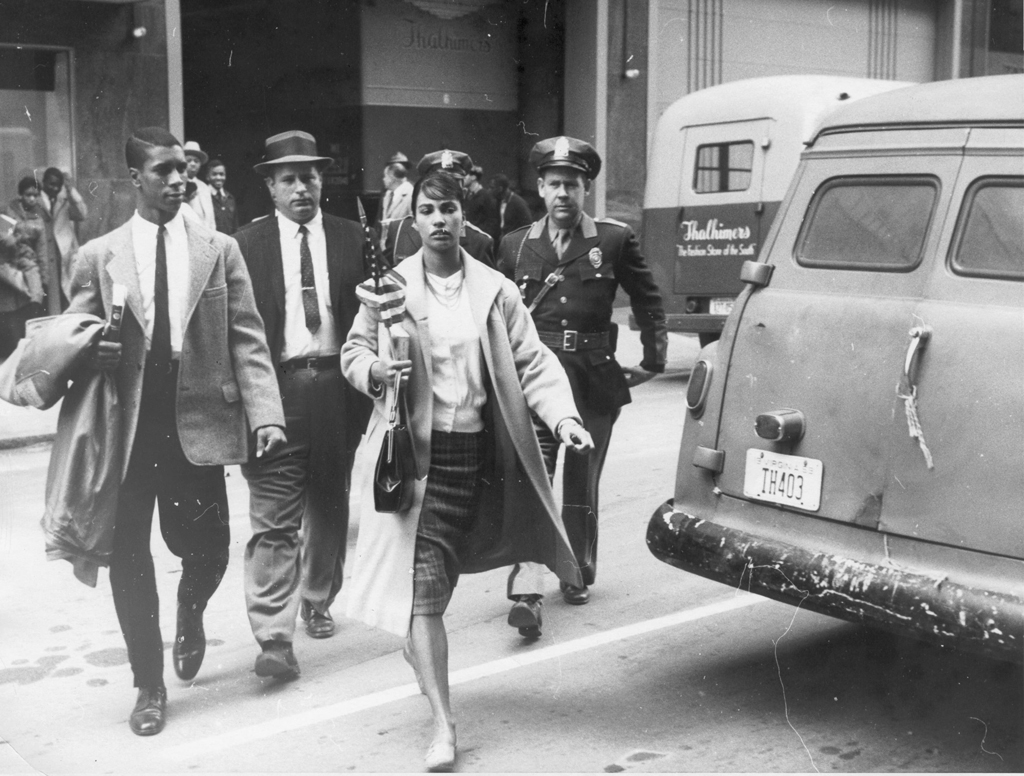 Student protest, Richmond, 1960
More than thirty-five Virginia Union University students were arrested at Thalhimers department store in Richmond on February 22, 1960. This marked the first large-scale arrests in connection with the surge of protests that swept the South over the issue of equal access to public accommodations. (Richmond Times-Dispatch)
Image 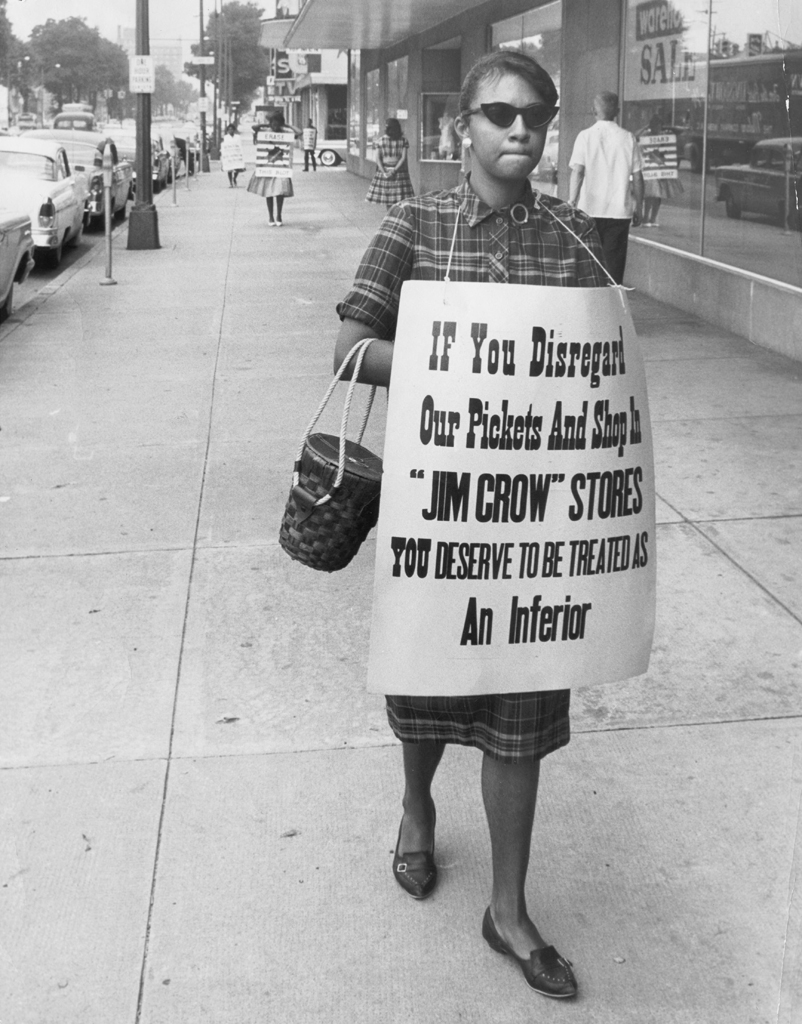 Woman protesting in Richmond
The sign carried by this woman reads: "If You Disregard Our Pickets And Shop In "JIM CROW" STORES YOU DESERVE TO BE TREATED AS An Inferior." (Richmond Times-Dispatch)
Image 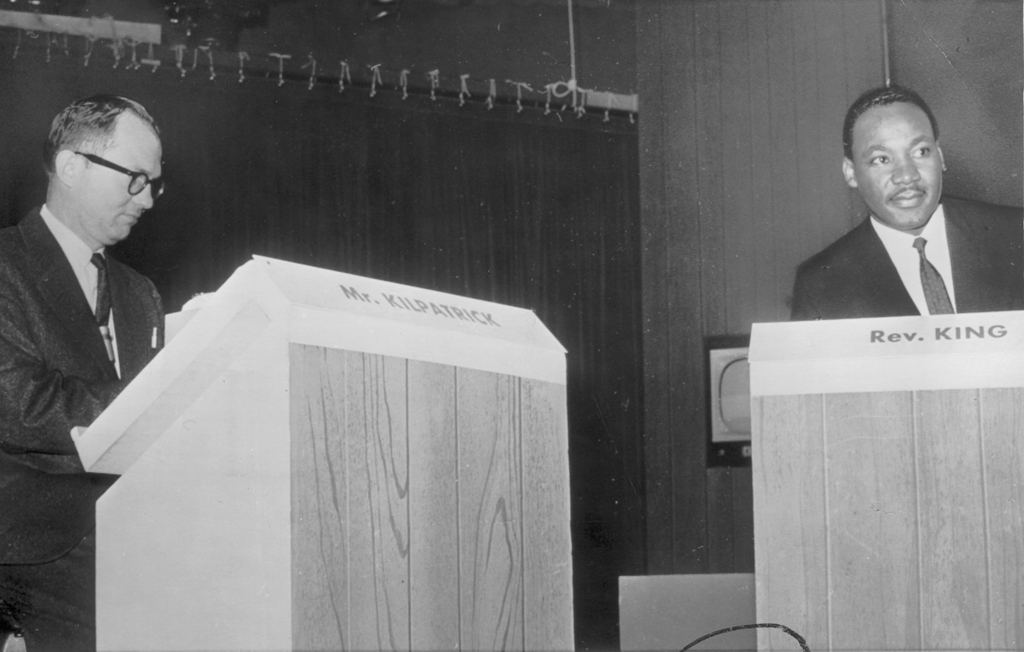 Televised debate, December 6, 1960
"Are Sit-in Strikes Justifiable?" was the topic of a December 6, 1960 televised debate between James J. Kilpatrick, influential editor of the Richmond News Leader, and Dr. Martin Luther King, Jr. Civil Rights sit-ins were inspired by the largely successful labor sit-ins at automotive plants in the 1930s and they were in accord with King's philosophy of non-violent resistance to oppression. (Richmond Times-Dispatch)