A historical image can be interpreted in a number of ways. Each approach brings a different set of considerations, or frame of reference, to the picture. Following are some examples of useful lines of inquiry into a historical image. 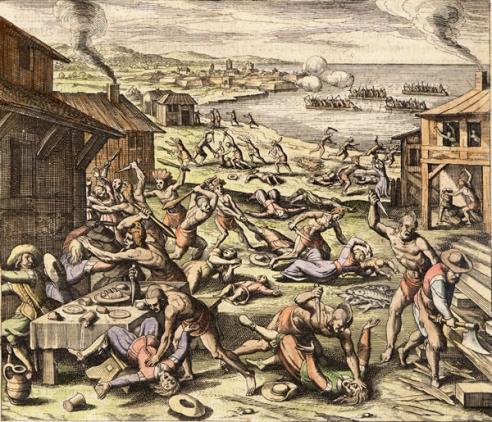 An initial approach is to look at an image as art. The art historian asks, what are the physical characteristics of the object—its medium—and what are the facts of its production? Who made the image, and how was it done?

The collection presented in this exhibition comprises prints, all engravings except for one lithograph. Most, if not all, of the engravings are from copper plates. Several of the prints are hand-colored and all were originally produced as illustrations for books. The earliest date from 1590, the bulk of them are from the 1600s and early 1700s, and the latest is from the mid-1800s.

The art historian also investigates the sources and visual precedents for an image. Did the artist work from life, from imagination, from other pictures, or, as was mostly the case, from some combination of these methods? By identifying the artistic style, the art historian can recognize the pictorial tradition, with its characteristics and conventions, that the artist has utilized.

Finally, as always in looking at art, there is a critical judgment of the artist's ability or success in creating an image. How well is the human form rendered? How convincing is the picture?

A second way of looking at an image is for its value as a historical document.
In the case of this collection, this would be the point of view of a historian of Native Americans or of an ethnographer or an archaeologist. The quality of an image as a historical document is not directly dependent upon its quality as art. For this type of historian, the central distinction is between truth and fiction. How accurately does this image report information about Indian appearance or way of life? Has the intention or method of the artist introduced inaccuracy?

It is not that some images are true and others are false; rather, one might think of a kind of sliding scale where some pictures are closer to truth than others. It is a matter not of absolutes, but of degrees. Clearly, however, images that are directly linked to actual observation of the subject are of greater value to the historian.

A third way to think about an image is for its influence at the time it was produced. In the case of this exhibition, the frame of reference might be that of a historian of the colonial period or of European culture. In their time, these prints were reports from the frontier. When Europeans first became aware of Native Americans and began to get ideas about them, these prints were the visual representations that helped to form those impressions.

The late 1500s and 1600s were a period when the growth of colonial empires had a great impact on European events, especially on the development of trading economies and on the conflicts between Protestant and Catholic Europe. It is sometimes overlooked that Virginia was Great Britain's first overseas colony.

In terms of the effect that pictures of Virginia Indians had on their contemporary era, the relative value of the images as historical documentation is not essential. If a print had great influence it is important for that effect, aside from whether it was accurate or not. In this frame of reference, truth and fiction are not the crux—the perception of the period is what's important.

A final point of view is to consider how the historical image is utilized today. This approach might be described as that of the historian as educator. Some images of Virginia Indians are more accurate than others. Is that characteristic reflected in their presentation? The modern use of historical images shapes the perceptions of today's citizens and their sense of how the nation and society arrived at its present situation. Pictures of Virginia Indians contribute to the story of the founding of the United States, a story that for many is enveloped in a mix of myth and history. It is just as important for historians to place images in context as they would any other kind of evidence.