Which John Brown have Americans remembered? The crusader for abolition or the bloodthirsty terrorist?

Brown was not forgotten in the wake of Appomattox. Herman Melville began his 1866 collection Battle-Pieces and Aspects of the War with "The Portent (1859)," a short poem about John Brown. The subject is seen after his execution "Hanging from the beam." To Melville, Brown is the "meteor of the war," which would burn out quickly but draw the attention of all observers while it flairs. At Harpers Ferry and during the days that followed, John Brown would command the attention of the nation as few men had before him. He was more than just a harbinger, however. His death ushered in a new historical moment. The political and emotional wounds forced open by Brown would remain until they were replaced by the actual bloodletting that began sixteen months later at Fort Sumter.

A decade after the Civil War, concerns about the rights of black Americans faded from the national conscience. During that process, the positive persona of John Brown that had been retained in the North began to be challenged. A number of new books and articles painted a different picture of Brown than the heroic image created two decades earlier by the New England Transcendentalists. The earliest historians to attempt to write about Brown from a national perspective did little to settle the dispute because they remained divided along the old regional battle lines. Black writers were not so conflicted. W. E. B. Du Bois wrote in 1909, "To-day at last we know: John Brown was right."

John Brown's standing in American memory rose considerably in 1928 when Stephen Vincent Benét published his Pulitzer Prize–winning poem, John Brown's Body. Benét asks a question that still resonates today—Was John Brown a hero or a criminal? How do we decide whether his goal trumped his criminality? The popularity of Benét's poem revived interest in Brown among poets, painters, and writers. The civil rights movement, which began at mid-century, proved to be of crucial importance in the reassessing of John Brown's legacy. Contemporary readers find a wealth of materials that constitute the most recent reassessments of Brown's legacy. 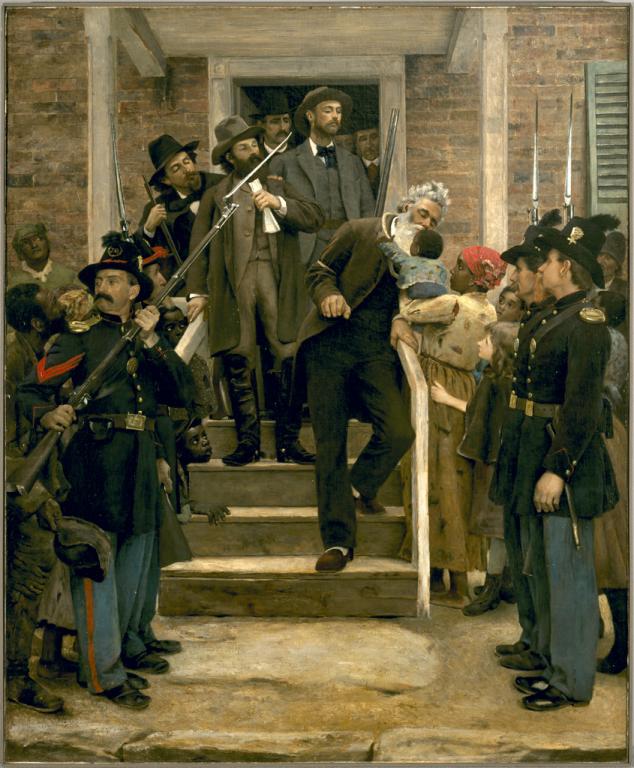 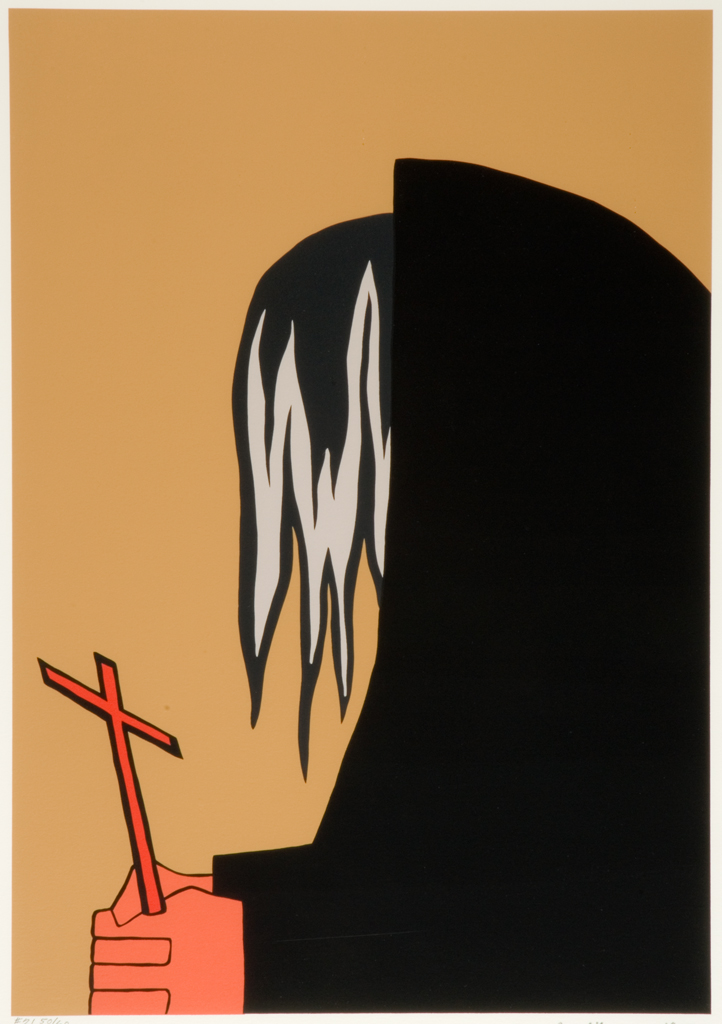 After John Brown's Capture, He was put on trial for his life in Charles Town, Virginia (now West Virginia)
In 1941, the young black artist Jacob Lawrence painted his Legend of John Brown. Lawrence stated that "the inspiration to paint the John Brown series was motivated by historical events as told to us by the adults of our community . . . the black community . . . To us, the men and women of these stories were strong, daring and heroic; and therefore we could and did relate to these heroes by means of poetry, song, and paint." The oral tradition could also be expanded upon by each teller; this allowed Lawrence the leeway that he shows in many of his twenty-two images. (Image courtesy of the Virginia Museum of Fine Arts, used with permission)
Image 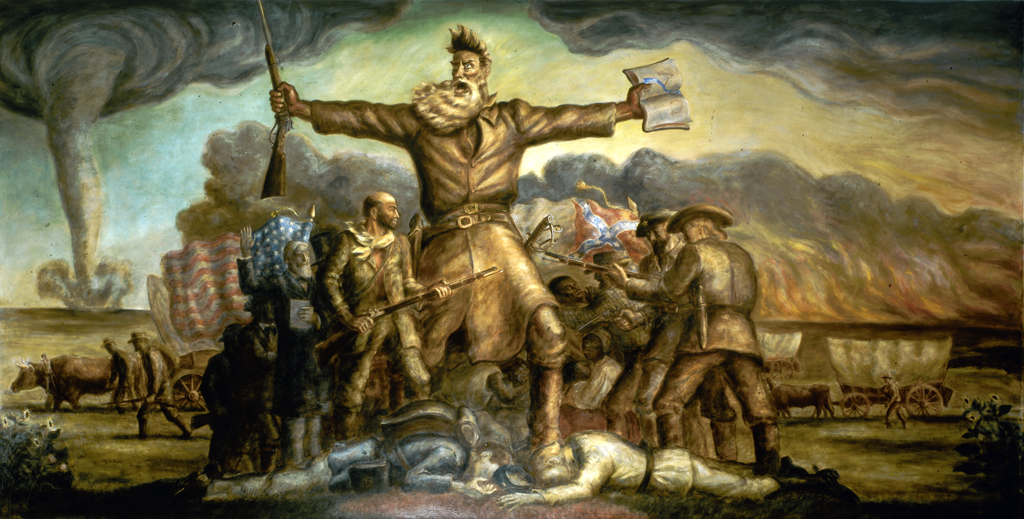 Tragic Prelude, 1937–39, by John Steuart Curry
This image is one of a dozen conceived by Curry in 1937–39 when he was invited to return to his native Kansas to paint murals for its capitol in Topeka. He was forced to abandon this project when groups complained that he chose to illustrate Kansans at their worst. They wanted no reminder that Kansas had served as the "tragic prelude" to the Civil War. Curry modeled his dynamic figure of John Brown on Michelangelo's sculpture of Moses, whom Brown admired as someone chosen as he had been to enact God's will. The modern prophet, posed as if being crucified, holds the word of God in one bloodied hand and in the other a "Beecher's Bible," a rifle purchased with funds raised by Rev. Henry Ward Beecher. Freestate and proslavery forces carry American and Confederate flags, the land is ravaged by a prairie fire and a tornado, and pioneers flee farther west to avoid the carnage. To Curry, John Brown was a fanatic whom many Kansas historians blamed for causing the bloodshed and desolation that had ravaged their state. (Image courtesy of the Kansas State House, used with permission)
Image 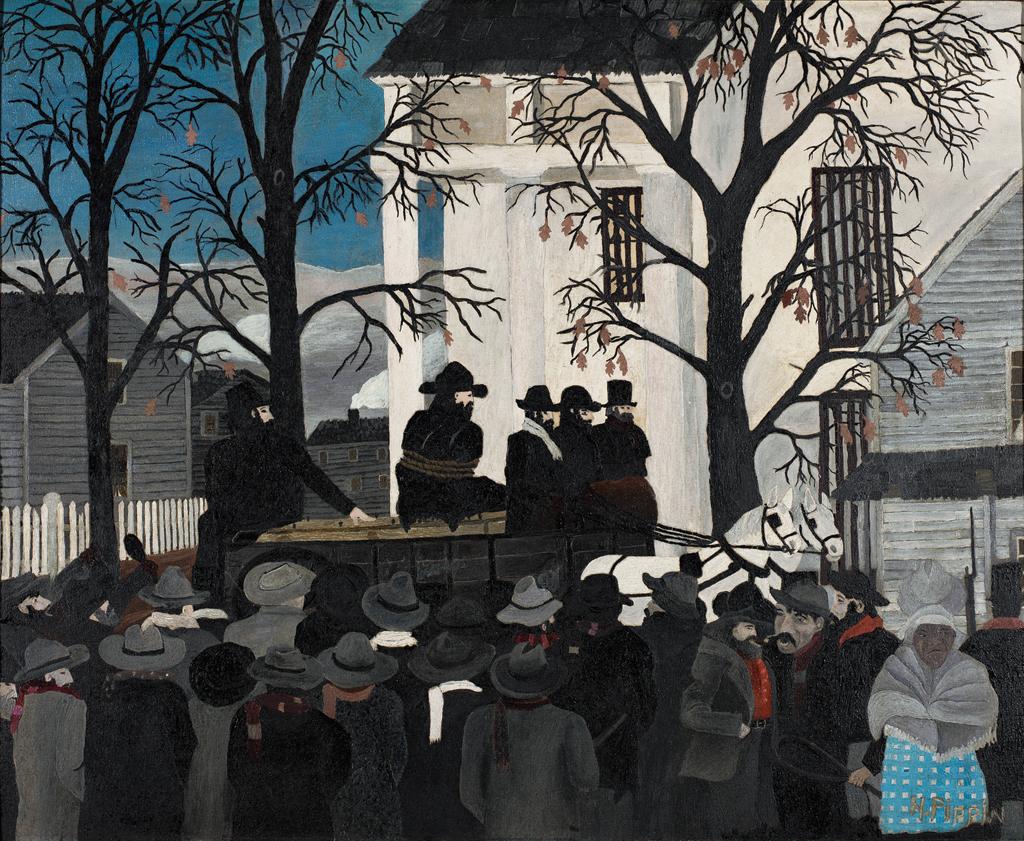