In 1590, Theodore de Bry reprinted Thomas Hariot's A briefe and true report of the new found land of Virginia. The text was illustrated with copper-plate engravings by de Bry and his associate, Gysbert van Veen, based on paintings by John White. The engravings signed by van Veen are stylistically identical to those signed by de Bry. The captions that accompany each engraving in the book are usually credited to Thomas Hariot.

Of the nineteen or so extant paintings by John White related to Virginia Indians, all are represented in the de Bry engravings. Ten are portrait studies of one or two figures, and three are landscapes. The de Bry engravings follow the White watercolors very closely in some respects and differ in others. White and de Bry were probably each responsible for some of the differences. It could well have been White—when he painted the set of copies for de Bry—who placed his figures into landscapes and showed them in both front and back views. From the hands of de Bry and van Veen, however, came the evolution from the mannered yet casual postures of the Indians in White's originals, to the sculpture-like poses in the engravings, with muscular physiques, small hands and feet, and Europeanized faces.

A Chief Lady of Pomeiooc 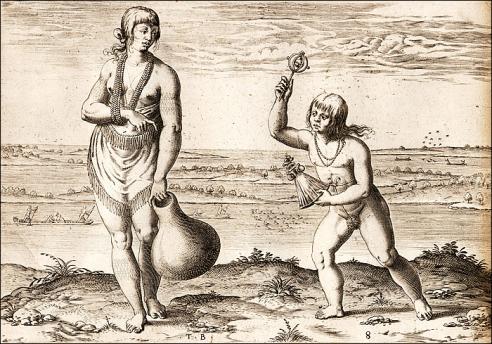 John White labeled this image "A cheife Herowans wife of Pomeoc, and her daughter of the age of 8 or 10 years." A Herowan was a chief or leader; Pomeiooc (or Pomeoc) was the name of a town. The book's caption observes that Indian girls "are greatly delighted with puppetts, and babes which were brought out of England." The girl holds a doll and a second toy that looks like a bell or rattle.

One of the religious men of the town of Secota 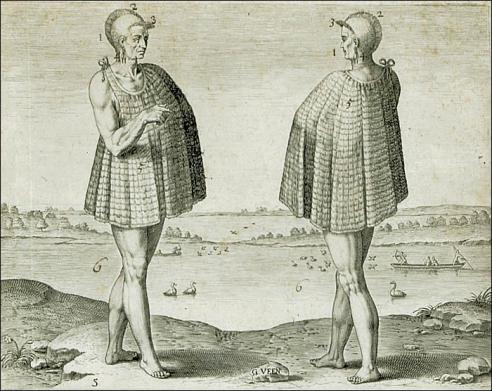 John White's paintings show two types of Indian religious men: one, as here, an older wise man; the second, a younger and more active figure called at different times "the flyer," "the magician," or "the sorcerer." (The hand-written numbers in the image are a later addition, keying details to their description in the text.) 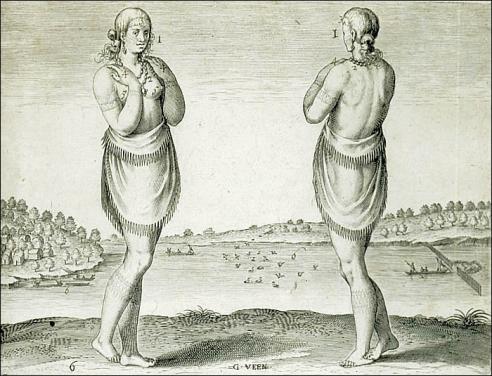 The title to John White's version of this image describes the woman as "One of the wives of Wingino." The book's caption discusses the apparel of "virgins of good parentage" and makes clear that the woman in the engraving is unmarried. 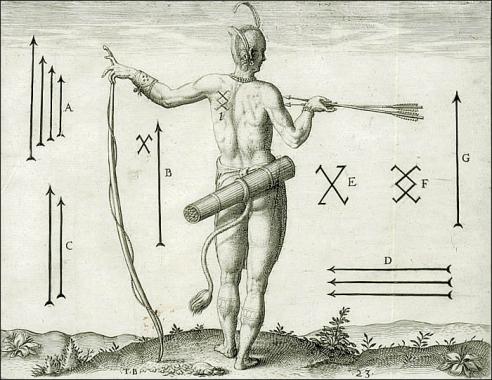 The sundry Marks of the Chief Men of Virginia

No extant John White painting corresponds to this print. The caption explains the symbols as marks worn by men to show their affiliation: "whereby it may be known what Prince's subjects they be, or of what place they have their origin." 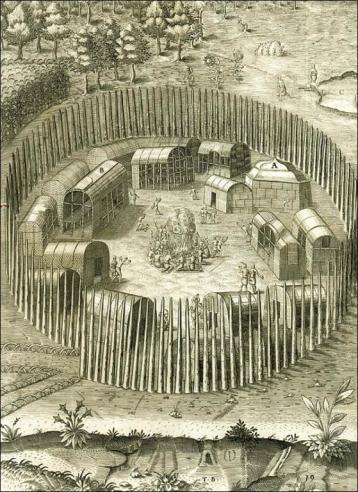 The three extant Virginia landscapes by John White are quite complex. Each is undoubtedly a composite created from a number of sketches. De Bry's view includes details not present in the extant painting by White, but possibly added by White to the copy he made for de Bry. The structure marked A is "their temple," and that marked B is "the king's lodging." The engraving represents the palisade as a more formidable barrier than the one shown in the painting.