Murals Inspired by the Story of Virginia

About the Exhibition: With over 100 murals, Richmond’s vibrant street art scene is a visual reminder of the city’s history, modernity, and diversity of cultures. This unprecedented exhibition, more than a year in the making, explored the power of murals to encourage reflection on Virginia’s past by inviting artists to produce works inspired by one or more historical items from the museum’s collection, and in so doing examine our present and inspire us to think about ways we can shape the future.

It started with an idea for the book, The Story of Virginia: Highlights from the Virginia Museum of History and Culture, co-authored by Jamie O. Bosket, VMHC President and CEO, and Dr. William M. S. Rasmussen while he was serving as the VMHC Senior Curator of Exhibitions and Lora M. Robins Curator of Art. Published in October 2018, it illustrates 400+ objects from our collection that help tell the rich history of the Commonwealth.

About the Artists: Our staff was inspired by how Richmond's street art community is telling the story of the city and state today. They wondered how these artists might interpret collection pieces and themes highlighted in the book. Thus, the Fresh Paint exhibition was born! Each artist was asked to develop a mural based on object(s) or theme(s) from the new book that they found particularly impactful.  View Artist Bios. 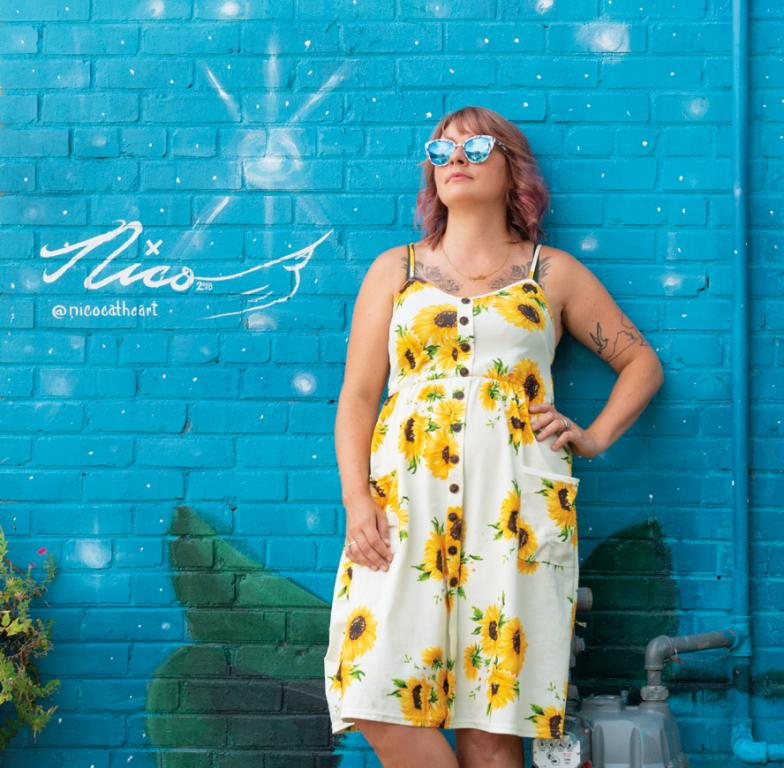 “Richmond is a public arts city. By putting this show together at the museum with its vast historical holdings, we are documenting a unique modern movement, while building on Virginia’s storied past. The show creates a new accessibility to a collection that is meaningful and expanding. The unique mix of younger artists with some of the more established faces of the mural community lends itself to a fun cross section of RVA right now.” - mural artist Nico Cathcart

Artist commissions and exhibit support were generously provided by Pam and Bill Royall.

The VMHC would like to thank all of the artists who submitted designs for Fresh Paint. Although the subjects of the murals may be provocative, all imagery and text in this exhibition is appropriate for a general audience that includes children and does not include profanity, nudity, or excessive violence.

Virginia designated the Northern Cardinal as the state bird in 1950, and the Dogwood as the state flower in 1918, and state tree in 1956. This image was painted during the Virginia Museum of History & Culture’s BrewHaHa Virginia Craft Beer Festival as a kick-off for Fresh Paint.

“As soon as I saw Charles Hoffbauer’s Confederate Memorial Military Murals, I decided to highlight the role of the United States Colored Troops in the Civil War. These black Union soldiers not only fought against Confederate soldiers—from whom they expected no quarter—but suffered distrust, discrimination, and even death, from their white allies. Although some blacks, both North and South, were classified as “free,” my work suggests that African Americans were engaged in a war where, even in victory, freedom would not be completely theirs.” - Hamilton Glass

Image
The Readjusters by Noah Scalin

“I became aware of the Readjuster Party during a visit to the museum and realized this nineteenth-century political movement was not included anywhere in my earlier education. I decided to replace the well-known Confederate officers in Charles Hoffbauer’s Confederate Memorial Military Murals with figures that I think we should focus more attention on. This piece contrasts the black struggle to achieve the rights of full citizenship with efforts by white Southerners to shape the narrative of Confederate defeat and regain political and social dominance after the Civil War.” - Noah Scalin

“Even the smallest objects can have great meaning. I was drawn to a 1.75-inch diameter brass disk on which are the words “Roanoke Navigation Company” and an image of two men guiding a boat filled with goods destined for points along the Roanoke, Dan, and Staunton rivers. I bring to this subject a perspective from my home in Roanoke, Virginia, and like the boatmen, am navigating a visual landscape to bring this interesting element of our history to today’s audiences.” - Toobz Muir

"Home is inspired by the work of John White, who joined a 1585 expedition to North Carolina—then called Virginia—to “drawe to life” the area’s natural bounty and inhabitants. His watercolors of the fish, birds, insects, reptiles, and other animals in the region encouraged English settlement of the New World. Virginia has always been my homestead and ecological treasure. Through black and white design, I’ve chosen to explore the history of Virginia's agriculture and ecosystems and how they intertwine within our coexisting daytime and nocturnal landscape.” - Amelia Blair Langford

“Higgle Milk Hulburt came to Virginia, it is thought, from somewhere cold and beautiful, probably Norway. He imagined farming the land and raising, like, thirteen children. Then he found pottery, or rather, he learned how to make beautiful, blue-glazed stoneware. He became an artist, and made a modest living selling his wares by the side of the road, from his converted Conestoga wagon. It is said he was rarely seen without his faithful friend, “Happily,” a bright red Cardinal. He found true happiness in his beloved wife, Hennie, and in their thirteen daughters, all named Hennie.” - Chris Milk Hulburt

Image
In Search of Monsters to Destroy by Mickael Broth

“As an avid fan of World War I history, I was thrilled to explore the museum’s exhibitions focusing on the war and its effect on the world. Though the Great War is not regularly a topic of discussion in popular culture, its lasting impact can be seen every day. My piece focuses on the repercussions of the decision to join the war effort; a decision that weighed heavily on the mind of Woodrow Wilson, the last American president born in Virginia.” - Mickael Broth

Image
By Any Means by Austin MIles

“My design is inspired by two American women of African descent, Mary Smith Peake and Barbra Rose Johns. In 1861, when the Union army occupied Hampton, Peake began teaching former slaves seeking freedom on what are now the grounds of Hampton University. Nearly a century later, Johns led a student walkout to protest unequal conditions in Farmville’s segregated public schools. This mural focuses on how black women used and pursued education as a tool to emancipate themselves and others from physical and mental enslavement.” - Austin Miles

“Geologists can only hypothesize as to how Natural Bridge was created, but they estimate the rocks to be 470 million years old. By comparison, Homo sapiens have only existed for about 200,000 years, and the average human does not even live to see 100. Beyond the history of Virginia, the bridge alludes to the history of the planet itself, and to the questions we cannot answer. I paint the bridge as a portal into another realm—a symbolic representation of how mere rock can cause a shift in consciousness.” - Wing Chow

“George Washington (profile at right) produced a quality rye whiskey that is being made today, and when a tax was levied on distilled liquors in 1791, a rebellion threatened our new nation. Well into the 20th century, government revenuers (at right) tried to stop the moonshining. Souped-up cars driven by bootleggers like Willie Carter Sharpe (profile at left) gave rise to NASCAR. Remarkably, today the mention of “moonshine” elicits images of both barefoot, toothless individuals and hip boutique distillers.” - Ed Trask

Image
The Elements of Change by Nico Cathcart

“I chose to work around a central theme of women as agents of social change. From left to right are suffragist Adele Clark; former slave Elizabeth Keckley; and women’s rights activist Casey Dokoupil. I render them in black and white to convey the timelessness of a woman's strength. The juxtaposition of these women against the full-color flowers presents these characters as women who are no longer to be seen as decoration, or as objects, but as elements of change in Virginia and beyond.” - Nico Cathcart

Murals Inspired by the Story of Virginia

Richmond is now home to more than 100 outdoor murals, and this popular form of artwork reflects the...
More
Media

Over the past decade, Richmond has seen an explosion of public artwork. Artist, muralist, and writer...
More