John Brown's raid on Harpers Ferry was a turning point in the sectional crisis. For many in the North, Brown became a martyr to the abolitionist cause. John Brown's raid also convinced many white southerners that militant abolitionists were commited to the destruction of slavery through insurrection and that southern interests could best be protected outside the Union.

The Kansas-Nebraska Act of 1854 overturned the Compromise of 1820 and mandated that the status of slavery in those two territories would be determined by the settlers themselves—a doctrine known as "popular sovereignty." Over the next year, proslavery southerners and antislavery Free-Soilers poured into Kansas. Among the Free-Soilers was abolitionist John Brown and five of his sons.

In a fraudulent election, a minority of Kansans, along with a large number of "border ruffians" from Missouri, returned a proslavery majority to the territorial legislature. Violence erupted. In early 1856, proslavery forces sacked and burned a part of the free soil town of Lawrence. In retribution, on May 24, 1856 John Brown led a small party of men to the homes of proslavery settlers along Pottawatomie Creek. There, five men were dragged from their homes and brutally killed. Over the months that followed, Brown denied responsibility for Pottawatomie—a claim accepted by many abolitionists. As the conflict in Kansas expanded, he gained national recognition for his defense of the free soil town of Osawatomie. For his actions, he earned the nickname "Osawatomie Brown" or "Old Osawatomie."

Over the next few years, Brown traveled through New England and the Midwest gathering support and raising money to take the fight against slavery to the South itself. What Brown envisioned was a slave uprising in Virginia. In June 1859, he arrived in Harpers Ferry, at the junction of the Potomac and Shenandoah rivers in the northern part of the state. Brown rented a farmhouse and waited for recruits to join him. Twenty-one men, twelve of whom had been with him in Kansas, eventually joined him.

On 16 October 1859, Brown led eighteen followers in a raid on the federal arsenal and armory at Harpers Ferry. Brown planned to use the weapons he and his men seized from the arsenal to arm slaves and inspire a general uprising. No slaves rallied to Brown's banner, however, and the insurrection collapsed. On 18 October, a detachment of marines under Brevet Colonel Robert E. Lee attacked the engine house of the armory, which Brown and his followers occupied. Most of Brown's men were killed, and he was wounded in the attack. Captured and arrested for treason, he was found guilty and sentenced to death. On 2 December 1859, John Brown was hanged in Charlestown, Virginia.

In his diary on the date of Brown's execution, William Gwathmey, a King William County planter and physician, described Brown as a "wicked beast[ly] man." His diaries entries on that and subsequent days give us a glimpse into the fear and anger of a white Virginia planter reacting to John Brown's raid.

The diary entries that follow were written by William Gwathmey (1794–1875). Gwathmey's diaries are part of a larger collection (approximately 10,000 items) of family papers that date from 1790 to 1982. These papers include letters, diaries, accounts, deeds, estate materials, and related records produced by four generations of Gwathmey family members who resided at their plantation, Burlington, in King William County.

William Gwathmey was a planter, physician, and trustee of the Beulah Baptist Church. His diary comprises twenty volumes that span the years from 1833 to 1874. (There are no diaries for half of those years.) Many were bound with printed copies of Richardson's Almanac. Almanacs such as Richardson's contained information for farmers, including how to use fertilizer, the dates of solar and lunar eclipses, and the optimum times for planting and harvesting. As the space allocated for individual entries was limited, farmer's diaries often contain little more than details about weather and work. Because they were intended to be referenced by the individual farmer or planter, entries are often filled with abbreviations and other forms of short-hand. 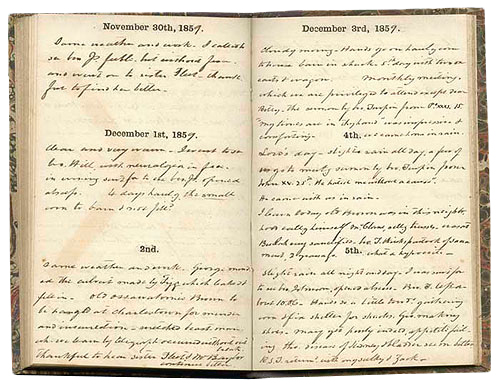 Gwathmey wrote that the hanging "occurred without outbreak," revealing a fairly common fear among white southerners that attempts would be made to rescue John Brown. In the entry of 4 December Gwathmey wrote that "old Brown was in this neighborhood callg himself McLane sellg trusses." This statement also attests to the power of rumor. John Brown was never in King William County. Gwathmey's acceptance of a reported sighting of him reveals more about his fears than it does about Brown's travels. Many slaveholders held a paradoxical view of their bondsmen. On the one hand, they believed their slaves were happy, docile, and child-like; on the other, they believed they were potentially violent and vengeful. The historian Bertram Wyatt-Brown describes slave owners as possessing "two alternating states of mind—apathy and horror." When faced with the possibility of insurrection, slave owners would "forsake their usual equanimity and succumb to panic at the prospect, real or imagined, of black-led bloodbaths and the upturning of the social order."

William Gwathmey's diaries primarily describe weather conditions, farming operations, physician's visits, and church activities. Only occasionally does Gwathmey make reference to state or national affairs. The fact that Gwathmey mentions him reveals the significance of John Brown to southerners. His reference to "old ossawatomie Brown" on 2 December suggests his knowledge of John Brown, his background, and the raid.

While we need to be careful in our interpretation, Gwathmey's claim that Brown was selling trusses (devices worn for support) may be a way of demystifying him. By asserting Brown was nothing more than a common peddler, perhaps Gwathmey was using mockery to deal with the incomprehensible.

Two biblical passages read at church by Brother Turpin, a lay preacher, are included here. Gwathmey, Turpin, and the other whites in the congregation at Beulah found solace in these words, seeing themselves as the true Christians who were being persecuted. What is important here is that John Brown, Brother Turpin, and William Gwathmey all found justification for their actions in the Bible.

November 30th, 1859.
same weather and work. I called to
see bro Js. feeble but without fever
and went on to sister Fleet – thank
ful to find her better.

December 1st, 1859.
clear and very warm – I went to see
bro. Hill with neuralgia in face.
in evening sent for to see bro. Js. opened
abcess. 4 days haulg the small
corn to barn & not filld.

2nd.
same weather and work. George mend
ed the culvert made by Figg which leaked &
fell in – old ossawatomie Brown to
be hanged at Charlestown for murder
and insurrection – wicked beast. man.
wh. we learn by telgraph occurred without out
break.
Thankful to hear sister Fleet & Mr. Baylor
continue better.

December 3rd, 1859.
cloudy morng – Hands go on haulg corn
to house barn in shucks 5th day with two ox
carts & wagon. Monthly meeting.
which we are privileged to attend except dear
Betty. The sermon by bro Turpin from PsXXXI. 15.
"My times are in thy hand" was impressive &
comforting – we came home in rain.

4th.
Lord's day – slight rain all day, a few of
us go to meetg sermon by bro. Turpin from
John XV. 25. "He hated me without a cause."
He came with us in rain
I learn today old Brown was in this neighbor
hood callg himself McLane sellg trusses – was at
Beulah very sanctified. bro. T. thinks partook of sacra
ment, 2 years ago. what a hypocrite –