One of the most important facets of the civil rights movement was the struggle for school integration. During the 1930s and 1940s, the National Association for the Advancement of Colored People (NAACP) worked within the confines of "separate but equal" in bringing lawsuits to improve black schools. By the late 1940s, NAACP lawyers changed their strategy, arguing that school segregation was unconstitutional because it violated the "equal protection" clause of the Fourteenth Amendment.

On 17 May 1954, the United States Supreme Court handed down its unanimous decision in Brown v. Board of Education, declaring racially segregated schools to be inherently unequal. A year later, in a decision known as Brown II, that same court allowed states and localities a good deal of flexibility in implementing the decision, mandating desegregation "with all deliberate speed."

Initially Virginia's reaction to Brown was restrained. The day after the 1954 decree was issued, Governor Thomas B. Stanley urged calm, and indicated he would consult state and local officials and "leaders of both races" to determine how Brown would be implemented. Quickly, however, resistance solidified. Opposition to the decision was centered in southern Virginia and was led by state senator Garland Gray of Sussex County. Businessmen in Farmville established the Defenders of State Sovereignty and Individual Liberties to fight school desegregation, and local chapters sprang up throughout the state. These organizations were similar to the White Citizens' Councils that were formed in the Deep South. According to one recent scholar of massive resistance, "In their publications and on the stump, the Defenders denounced integration, emphasizing instances of racial tensions in northern schools, the high crime rate among blacks, and alleged communist influence in the civil rights movement." Roy Wilkins responds to these specific charges on pages seven through nine of his speech.
"Since the landing in Jamestown in 1607 this has been our land and we have been its people. We have fought to defend it from Boston Common to Iwo Jima. A famous Virginian inspired us, as he inspired countless others, with his cry of "Give me liberty or give me death!" In the great American tradition, we shall be restless, we shall not be content, and we shall be active until that freedom is ours." -Roy Wilkins

Governor Stanley appointed a legislative commission, chaired by Senator Gray, to prepare Virginia's official response to Brown. In November 1955, the Gray Commission issued its findings, calling for the creation of local pupil placement boards and the payment of tuition grants to students to attend private schools, if their public schools were integrated. These measures were designed to limit desegregation, and even give localities the means to prevent it entirely if local officials wanted. However, the Gray Plan allowed for the possibility of integration and several Virginia localities indicated they would desegregate their schools if it was enacted. This was unacceptable to the more ardent segregationists. Behind the scenes, U.S. Senator Harry F. Byrd, Sr. called for more drastic measures. In a February 24, 1956 speech, Byrd said, "If we can organize the Southern States for massive resistance to this order I think that in time the rest of the country will realize that racial integration is not going to be accepted in the South." Massive resistance meant no integration anywhere in the state.

At the same time Byrd was pushing the state toward total defiance, James J. Kilpatrick, editor the Richmond News Leader, wrote a series of editorials calling for Interposition. Interposition meant challenging the federal government's constitutional jurisdiction, claiming that the regulation of public education was one of the powers reserved to the states. Interposition had been invoked before—by James Madison in the Virginia Resolutions of 1798—but had never been recognized as anything other than a rhetorical argument. Virtually every legal mind in the state, including attorney general and future governor J. Lindsay Almond, recognized that the doctrine of Interposition, like secession, had been rendered obsolete by the Civil War. On page two of his speech, Wilkins ridicules the theory of Interposition.

Under Byrd's guidance and using Interposition as rationale, the Virginia General Assembly met in special session in August 1956 to enact legislation designed to maintain segregated schools. One law created a state pupil placement board, ensuring that African American plaintiffs would be assigned to all-black schools. The most significant act, however, and the heart of massive resistance, was a law that allowed the governor to close schools in any district under court order to desegregate. Local schools boards could then petition the state to reopen the schools on an integrated basis, but if they chose this route, the governor would cut off state funding to that system. This is what Wilkins means with his reference to the "Rube Goldberg monstrosity" on page two.

Despite the efforts of the Byrd and his supporters, the passage of the massive resistance legislation was not a foregone conclusion. Many in the General Assembly opposed the laws, including Kathryn Stone, a delegate from Arlington. Wilkins alludes to Stone’s mistreatment on page five, chiding conservative Virginians for their lack of chivalry, civility, and sense of fairness.

During the massive resistance session, legislators also passed seven bills designed to obstruct the efforts of the NAACP. Without mentioning the NAACP by name, these bills required any organization that "engaged in promoting or opposing legislation in behalf of one race or color" to register with the State Corporation Commission and provide lists of members and contributors. Other laws prohibited organizations from encouraging and assisting in desegregation lawsuits. Legislative committees were set up to investigate the NAACP. On pages five and six, Wilkins responds to these laws, claiming that NAACP activities were no different from those engaged in by business and trade associations. His allusion to Virginia's apple growers is a reference to Senator Byrd, an orchardist.

In November 1957, the Soviet Union launched Sputnik, causing many Americans to question the quality of their public schools. Supporters of school integration often used the threat of the Soviet scientific supremacy to counter the advocates of school-closing. This is the context for Wilkins's remarks (page two) on the academic failures of Georgia students and his comment, "in the face of this record and in their hour of need, it simply does not make sense for a body of legislators to be planning to close public schools."

Wilkins gave this speech at the Mosque (now the Landmark Theater) on February 27, 1958. At this point, Virginia’s massive resistance laws were in effect, but remained untested. In September 1958, under massive resistance, schools were closed in Warren County, Charlottesville, and Norfolk. On January 19, 1959, both the Virginia State Supreme Court and the U.S. Supreme Court struck down Virginia’s massive resistance legislation. On February 2, 1959, a handful of black students were admitted to previously all-white schools in Arlington and Norfolk.

This speech was mailed from 404 1/2 N. Second Street, the headquarters of the Richmond Chapter of the NAACP. It was sent to Will Rachal, the editor of the historical society's Virginia Magazine of History and Biography. The speech was accessioned on March 14, 1958, with the National Association for the Advancement of Colored People listed as the donor. 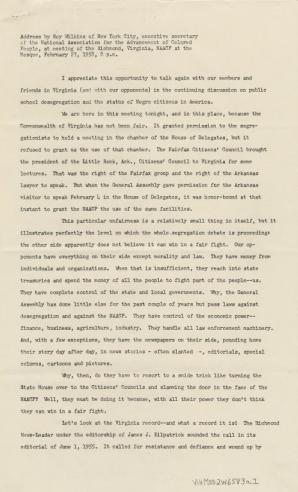 This document consists of eleven typewritten legal-sized pages. The twelfth page is the back of page eleven and has been included to show how the speech was addressed and mailed. Wilkins begins his speech with the sentence, "I appreciate this opportunity to talk again with our members and friends in Virginia (and with our opponents) in the continuing discussion on public school desegregation and the status of Negro citizens in America." Ask your students to think about how an audience that includes both supporters and opponents shaped Wilkins's message. Was Wilkins actually addressing opponents, or was he referring to the invited members of the General Assembly?

Roy Wilkins was a journalist and civil rights leader who served as executive director of the NAACP for twenty-two years. Of him, one biographer writes, "His tenure characterized him as a pragmatist and strategist who believed that reasoned arguments, both in the courtroom and in public discourse, would sway public opinion."

View the slideshow at the bottom of this page to view the entire document in detail. 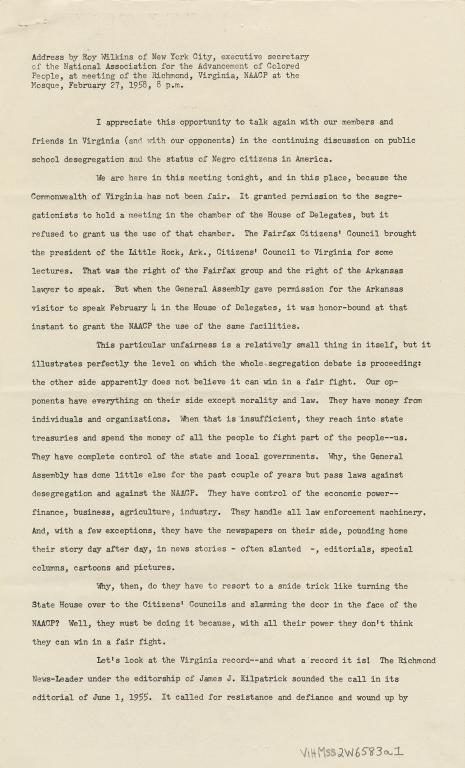 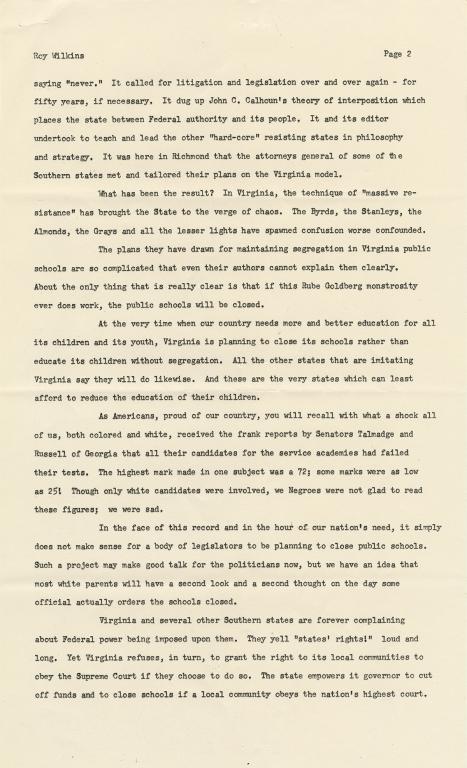 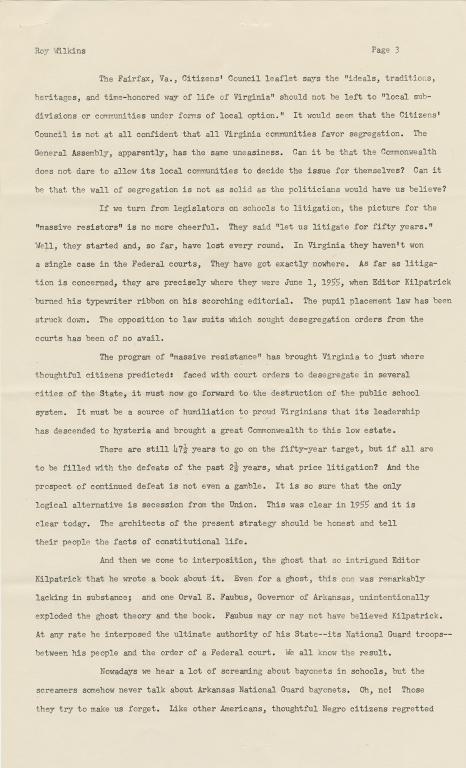 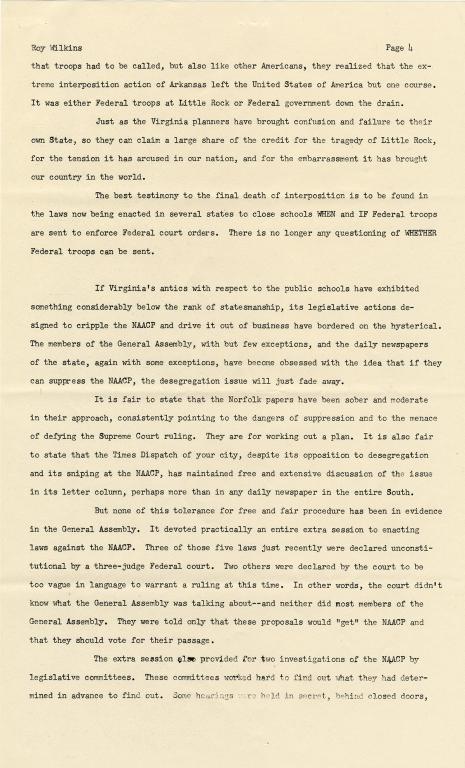 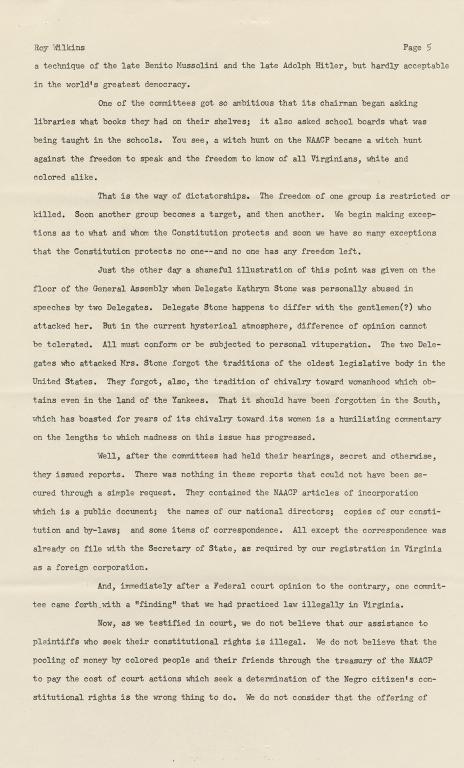 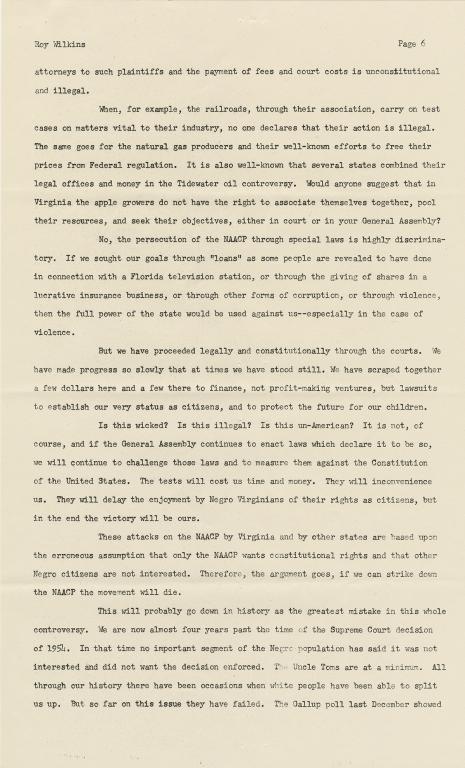 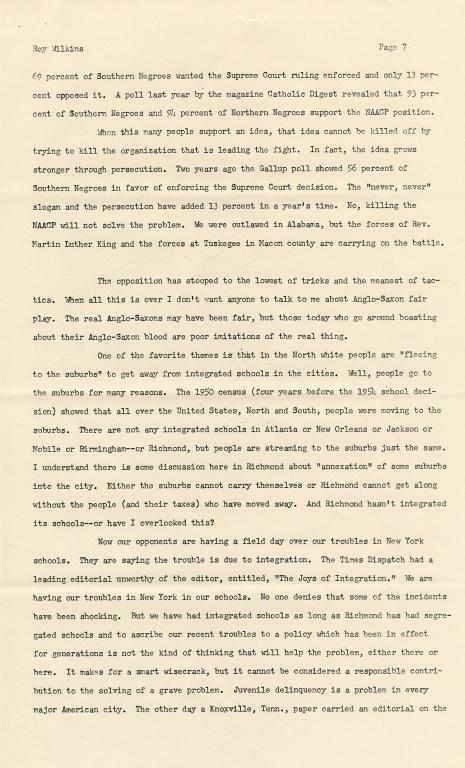 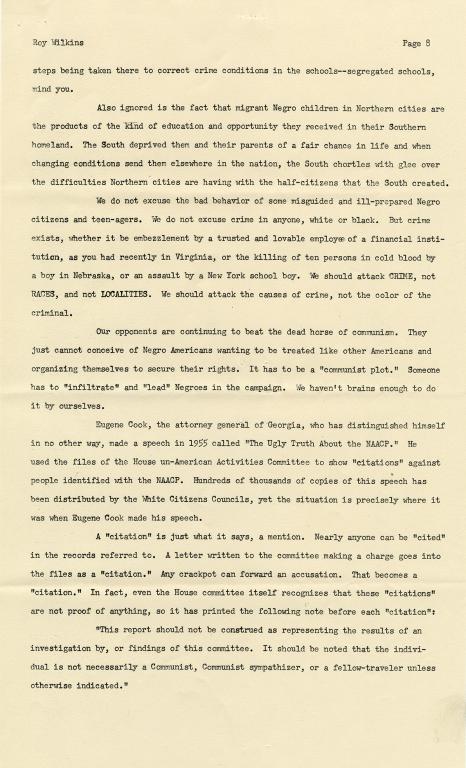 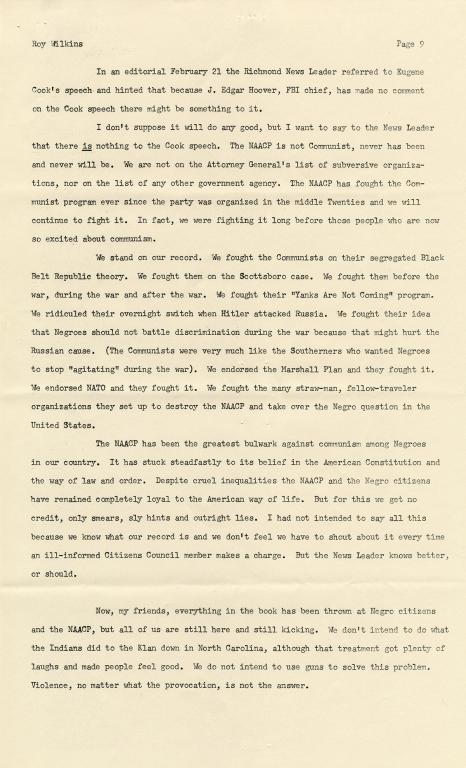 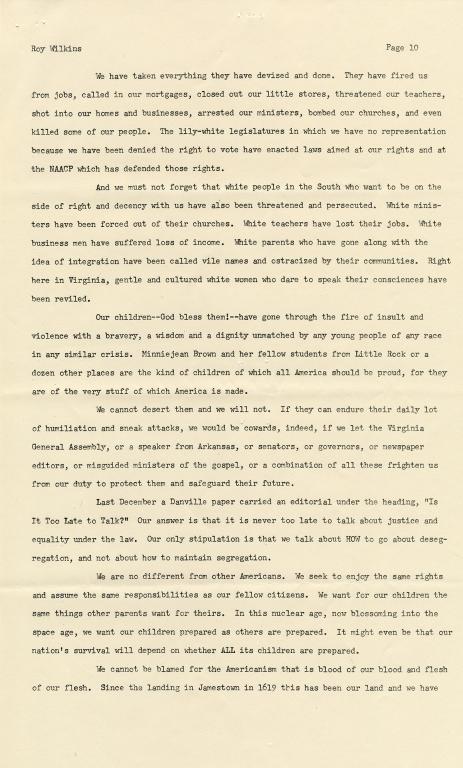 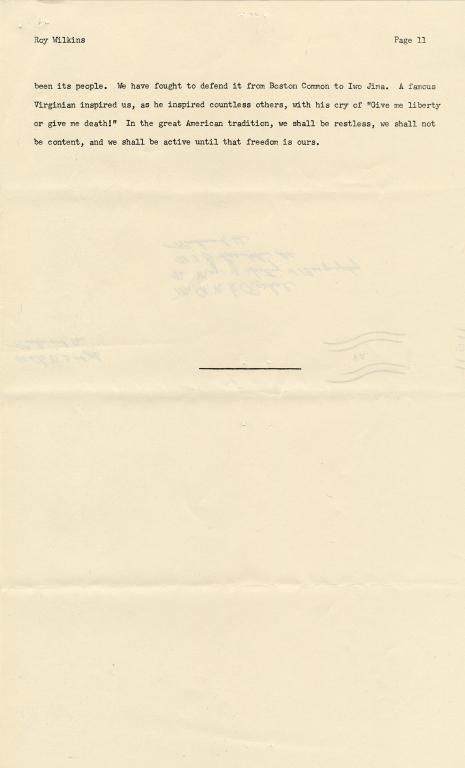 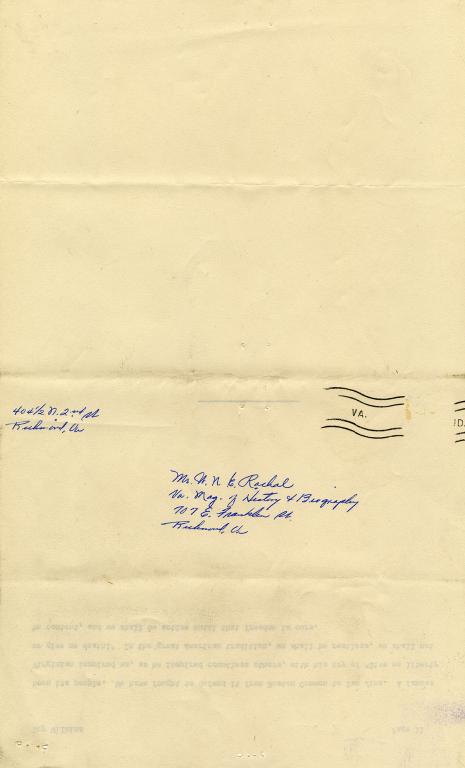