Female Activism in Virginia from Women’s Suffrage to Today 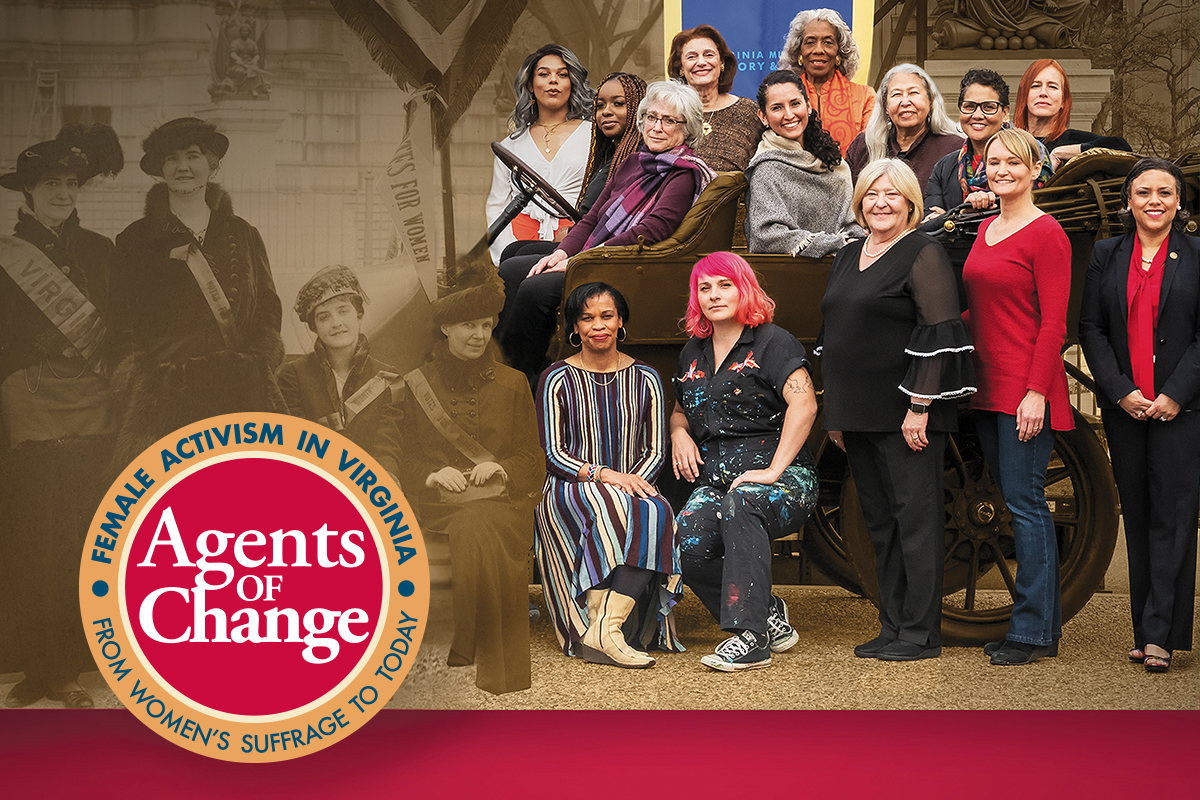 About the Exhibition: The passage of the Nineteenth Amendment in 1920 radically re-defined the meaning of American democracy by banning gender-based restrictions on voting. This landmark legislation marked the culmination of a concerted fight for women’s suffrage and heralded a new age of female participation in American civic life.

Organized in conjunction with the statewide Women’s Suffrage Centennial, this exhibition featured artifacts from the museum’s vast collections and new acquisitions made through a major collecting initiative, celebrated a century of women’s social and political activism in the Commonwealth. Highlighting the efforts and impact of a selection of female change-makers these women brought about positive change in their communities, the Commonwealth, and the nation. They also created new models of female empowerment and new opportunities for women—ultimately fostering a more inclusive and equal society.

See where the Traveling Exhibition is on display.

Thank you to our exhibition sponsors: The E. Rhodes and Leona B. Carpenter Foundation and Mr. and Mrs. G. Gilmer Minor III.

Explore our online exhibition of Agents of Change: Female Activism in Virginia from Women’s Suffrage to Today with a 360-degree virtual tour.

Southampton County native Nancy Bailey left her job as a high school teacher to enlist in the WAVES out of a sense of patriotic duty. She later recalled, “There is no way to tell you how I felt when I put on my first uniform and stood up to salute when the Star-Spangled Banner was played.” Gift of Nancy Bailey Bon Cogsdale.

As household managers, American women helped the war effort by rationing—a sacrifice deemed both necessary and patriotic. To ensure adequate supplies for defense needs, the government rationed commodities such as sugar, fuel, and food items, and issued booklets like these with stamps for obtaining the regulated quantity of rationed goods.

This coin holder emblazoned with Walker’s portrait is a fitting tribute to her commitment to black empowerment in the face of rampant discrimination. “Let us put our moneys together,” she stated when she founded the Saint Luke Penny Savings Bank, “and reap the benefit ourselves … Let us have a bank that will take the nickels and turn them into dollars.”

Perhaps the most iconic emblem of contemporary female activism is the pink Pussyhat worn in the Women’s March, held annually in cities around the world since 2017. Originally designed to signal opposition to President Donald Trump, this hat in the shape of cat’s ears symbolizes female empowerment. Stephanie Younger has been involved in both the D.C. and Richmond Women’s Marches. Gift of Alyssa Murray.

Image
Protest sign from the Women’s March in Richmond, January 20, 2018

This handcrafted sign bears a statement variously attributed to a Mexican proverb or a gay poet of the 1970s. The inscription on the back revises the famous Cyndi Lauper lyric to, “Girls just wanna have FUNdamental HUMAN rights!” Gift of Women’s March RVA Courtesy of Rachel Scott Everett.

In 2014, a Chesterfield County couple helped overturn Virginia’s ban on same-sex marriage as plaintiffs in Bostic v. Shaefer, a landmark case in the U.S. Fourth Circuit Court of Appeals. When they entered this legal fight, Carol Schall and Mary Townley had been together for decades and had a daughter, Emily. In 2008, they married in California—the first state to legalize same-sex marriage—but Virginia did not recognize their union. This meant, for instance, that Schall could not visit or get information about Townley when she was hospitalized during her pregnancy. As Emily’s non-biological parent, Schall was also denied full parental rights. This family’s battle for legal equality reflects ongoing activism for LGBTQ+ rights. The couple’s daughter, Emily Schall-Townley (b. 1998), was actively involved in the family’s fight for equality. She was wearing this necklace on the day that the federal court struck down Virginia’s ban on same-sex marriage (see image on main panel). Gift of Carol Schall, Mary Townley, and Emily Schall-Townley.

“Culture of this Country = Equality & Diversity” is one of the notes that Schall, Townley, and their daughter wrote to each other in the courtroom. Another comment, “So those celebrity 10 min marriages are good for children?” responds to the opposing side’s claim that children raised without a traditional mother-father unit are disadvantaged.

Image
The Virginia Woman, about 1917. Equal Suffrage League of Virginia.

This broadside makes the case for suffrage through the unfavorable comparison of the rights and privileges held by Virginia women to their sisters in states where women could vote.

Younger uses creative expression—writing and art—to address the intersection of racism and sexism in her life. For instance, as a woman of color, she experiences different forms of discrimination than a white woman would. In this work, Younger juxtaposed a silhouette of a Black Power fist against a background of Post-It notes inscribed with statements people have said to her. On loan from Stephanie Younger.

Several generations of Rappahannock leaders have used this drum in spiritual ceremonies. Under her tenure as chief, Richardson initiated programs to teach young people native language, dance, arts, foodways, and other traditions. On loan from Chief Anne Richardson, Rappahannock Tribe.

Over the course of her career, Dr. Gilpin used this notebook to record information about a range of ailments. Some of her notes likely date from the summer of 1933, when she attended a post-graduate clinic held at St. Philip Hospital, Richmond’s black hospital, in conjunction with the Medical College of Virginia. MCV did not admit black students until 1948. Gift of Dorothy Radcliffe Chambers, 2006.

Image
Susan B. Anthony necklace, around 1975. Designed by Suzanne Benton.

Crater regularly wore this necklace of her hero and embraced Anthony’s famous directive “Educate all women to rebel”—inscribed on the underside. Crater founded and edited The Woman Activist newsletter and the annual Almanac of Virginia Politics to inspire women’s political engagement. On loan from Walt Crater and Vivian Gray.

Copenhaver marketed Rosemont products through mail order catalogs—she had customers across the nation and abroad. The cover image here, dating from the 1920s, evokes the sense of tradition and craftsmanship she prized, of skills “handed down from mother to daughter since colonial times.”

In traveling around the state, giving speeches, and wielding campaign signs such as this flag, suffrage activists bucked traditional conceptions of white southern femininity as genteel, demure, and confined to the domestic sphere.

In association with the Agents of Change exhibition, the VMHC engaged a group of contemporary “agents of change” to recreate an iconic 1915 photograph of the Virginia suffrage movement about 100 years after the original was taken. Although not a comprehensive picture, this 2020 portrait captures the dynamism and diversity of female activism in Virginia today.⁠

The photograph was unveiled at the VMHC on March 8, 2020 to celebrate the opening of Agents of Change and International Women’s Day, and it was displayed in conjunction with the Agents of Change exhibition.

"These Things Can Be Done" Documentary

A century ago, women were not assured a voice in American democracy. In August 2020, the U.S. celebrated the centennial of the ratification of the 19th Amendment guaranteeing women the right to vote. In this documentary produced by Boedeker Films and VPM with support from the Commonwealth of Virginia's Women's Suffrage Centennial Commemoration in partnership with the VMHC, the often-overlooked narrative of women’s suffrage in Virginia is brought to life through rare archival footage, photographs, oral histories, radio broadcasts, and interviews with historians, descendants of suffragists, and modern activists.

In commemoration of the Women’s Suffrage Centennial, the League of Women Voters - Richmond Metro Area created a self-guided tour of historic sites around the Richmond area that have been significant to the struggle for the women’s vote in Virginia.

The League of Women Voters is a nonpartisan political organization encouraging the informed and active participation of citizens in government through voters service/citizen education and action/advocacy. It influences public policy through education and advocacy and never supports or opposes any political party or candidate.

Explore digital resources from VMHC Education related to the exhibition and the history of women's suffrage, including:

In honor of the 100th anniversary of the ratification of the 19th Amendment in the United States...
More
Media

Curators at Work: These Things Can Be Done Film Discussion

In August 2020, the U.S. celebrated the centennial of the ratification of the 19th Amendment...
More
Media

Learn about the journey to achieve women's suffrage in Virginia.
More
Article

Learn about how the Equal Suffrage League of Virginia helped women gain the right to vote.
More
Media

Interested in addressing a problem, making something better, or helping others in your community...
More
Media

From before Jamestown to our own new millennium, women have been central figures in the families and...
More
Article

Learn about how women in the early 20th century lived in Virginia.
More
Article

Carving Out Space in the Military: WAVES

World War II opened new opportunities for women in the military and on the home front, though it was...
More
Article

Maggie Lena Walker (1864–1934) was the daughter of Elizabeth Draper, a former kitchen slave and then cook in the Civil War household of Union sympathizer Elizabeth Van Lew. Walker grew up helping her mother run a small laundry service.
More
Article