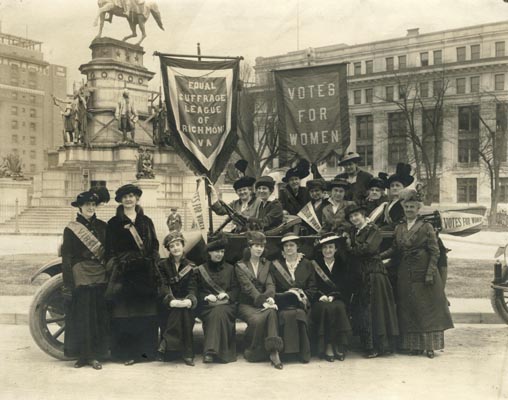 Black and white photograph of seventeen suffragettes posed in front of the Robert E. Lee memorial statue in Richmond, VA.

The Equal Suffrage League (ESL) of Virginia was founded in 1909, as women in the commonwealth expanded their fight for the right to vote. Lila Meade Valentine, as the first president of the league, traveled throughout the state to raise public awareness and build support for women’s suffrage. Other prominent participants included authors Ellen Glasgow and Mary Johnston, education activist Mary Munford, and artists Nora Houston and Adèle Clark. However, the ESL was an all-white organization—no Black women were admitted.

The ESL worked tirelessly for a decade, but the group failed in its efforts to convince state representatives that women should have the vote. Other southern legislatures, including Alabama, Georgia, Mississippi, and South Carolina, also voted to keep women away from the polls.

The issue of race presented a major problem for the suffrage movement in Virginia. The ESL initially waffled on the question of Black women being given the right to vote, but eventually the group rejected the idea and toed the line of Jim Crow politics. Some white activists, including Lila Meade Valentine, excused their tactic by emphasizing it was politically expedient rather than a matter of principle. Another stumbling block for women’s suffrage was its close ties to the labor movement and its call for legislation to protect women and children from the exploitation of sweatshops. All of ESL’s efforts were complicated by Virginia’s one-party rule, which made exploiting differences between political parties impossible. After years of defeat at the state level, the group switched tactics and focused on winning Congressional passage of the amendment.

Women in Virginia gained the right to vote in 1920 with the passage of the Nineteenth Amendment to the U.S. Constitution. It passed without Virginia’s support—and the General Assembly did not officially adopt the amendment until 1952. 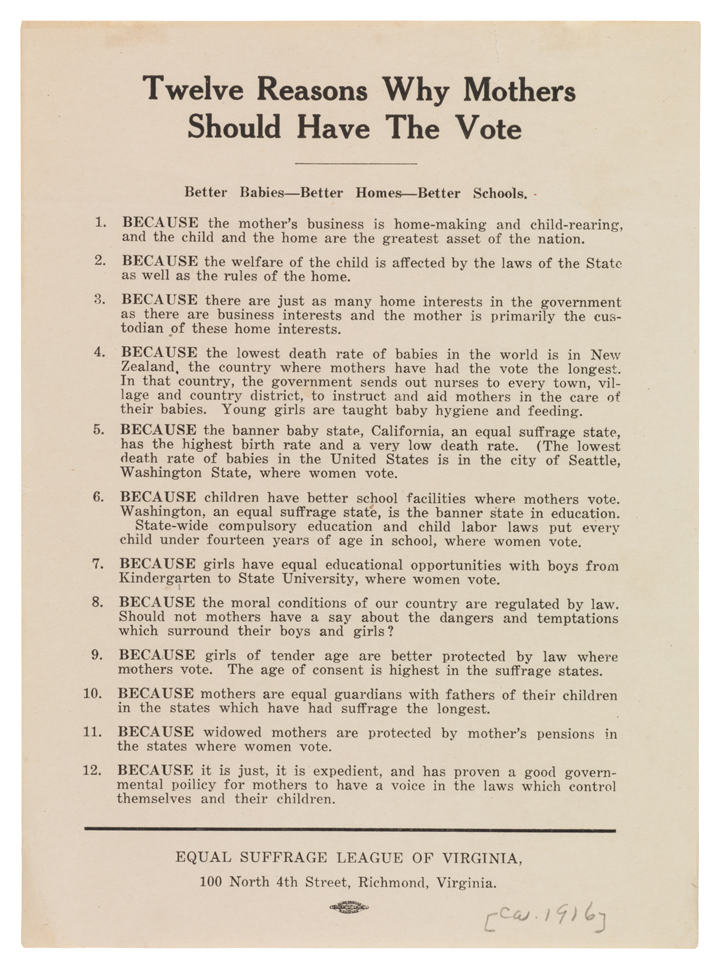 Twelve Reasons Why Mothers Should Have the Vote broadside
The ESL tried different tactics to convince the public to endorse suffrage. One of the fliers they distributed targeted mothers and pointed out that states that had passed suffrage had equal educational opportunities for girls and protective child labor laws. It concludes “It is just, it is expedient, and has proven a good governmental policy for mothers to have a voice in the laws which control themselves and their children.” Tennessee became the thirty-sixth and deciding state to ratify the Nineteenth Amendment when one of the delegates followed his mother’s advice “to do the right thing” and switched his vote to yes. (VHS call number: Broadside 1916:2)
Image 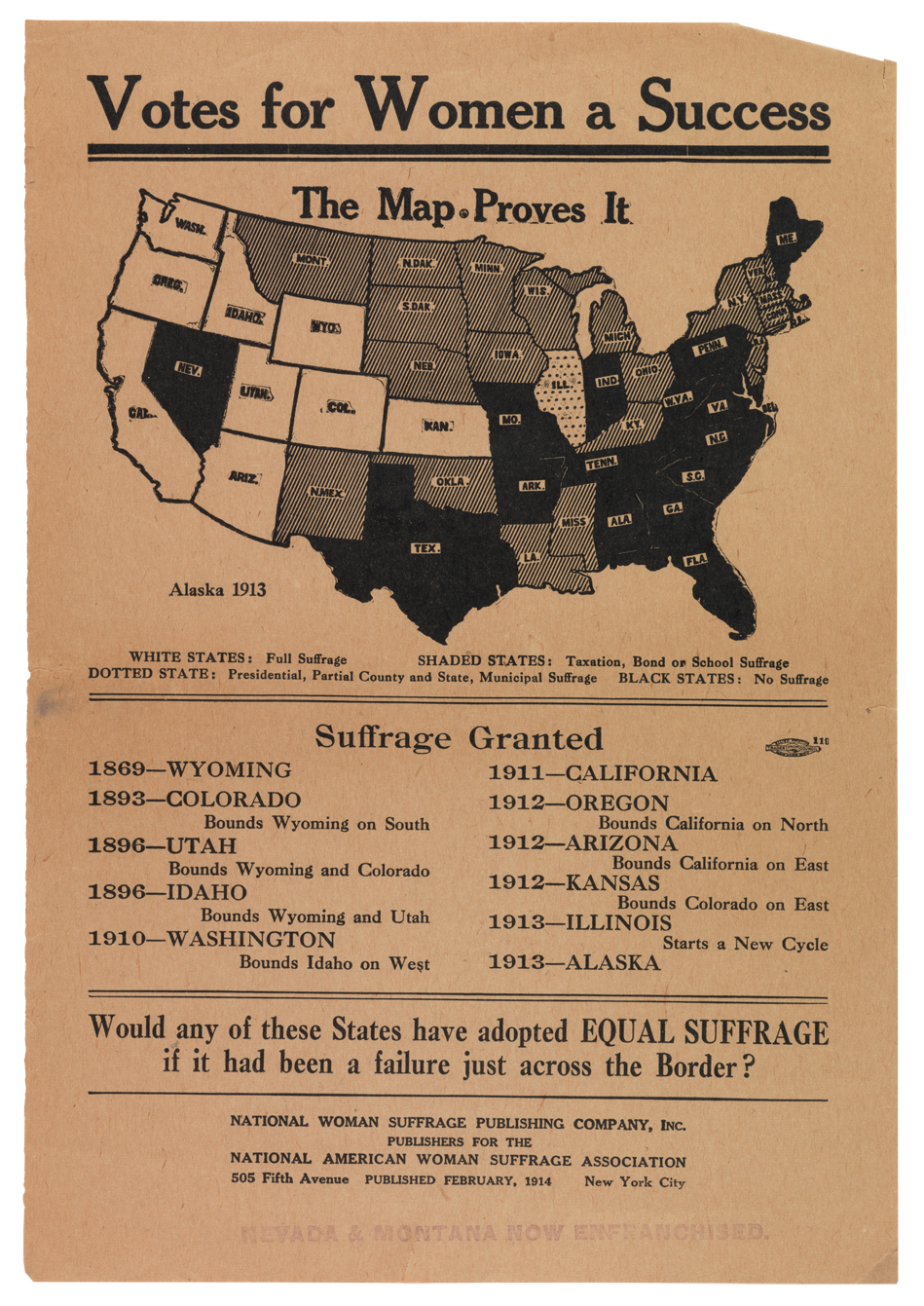 Votes for Women a Success broadside
The ESL had been active for several years when this broadside was issued in 1914 by the National American Woman Suffrage Association (NAWSA). The suffrage movement was sweeping the west, and by 1896, Wyoming, Colorado, Utah, and Idaho had all adopted amendments to their state constitutions granting women the right to vote. As this map demonstrates, many southern states were opposed to suffrage, and seven of them rejected the amendment (Alabama, Georgia, Louisiana, Maryland, Mississippi, South Carolina, and Virginia). (VHS call number: Broadside 1914:6)
Image 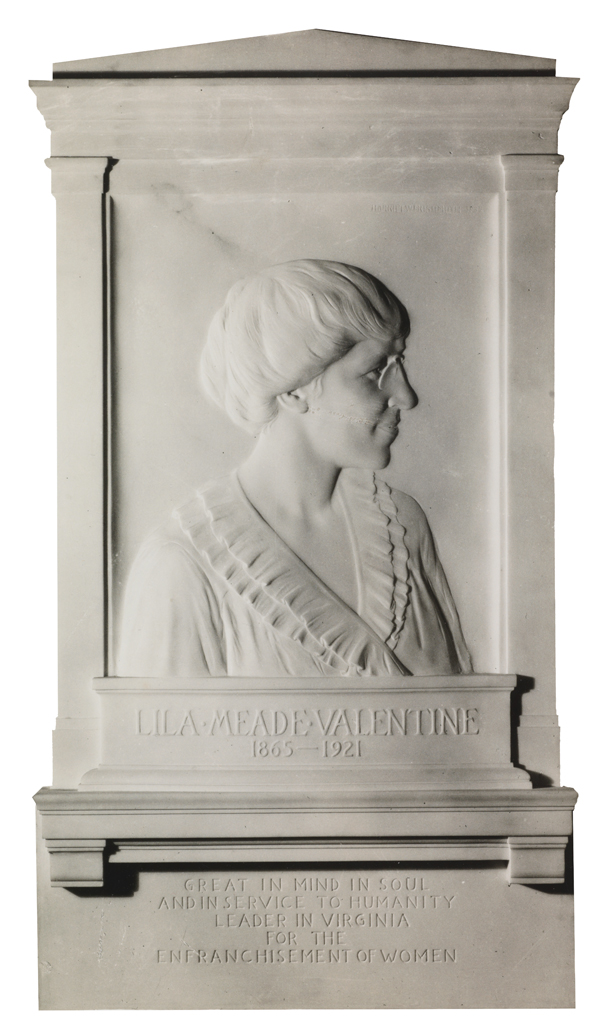 Memorial Plaque of Lila Meade Valentine
The Virginia General Assembly refused to ratify the Nineteenth Amendment giving women the right to vote, but it did honor Lila Meade Valentine as a “leader in Virginia for the enfranchisement of women.” Nancy Astor spoke at the ceremonies for the unveiling of the memorial tablet at the state capital on October 20, 1936. Valentine was the first woman so honored. Valentine never had the opportunity to vote because Virginia, like several other southern states, was slow to implement the Nineteenth Amendment. Valentine, too ill to go to the polls in 1920, died in July 1921, never having cast a ballot. (VHS accession number: 2013.1.3)