A Great Leap of Faith 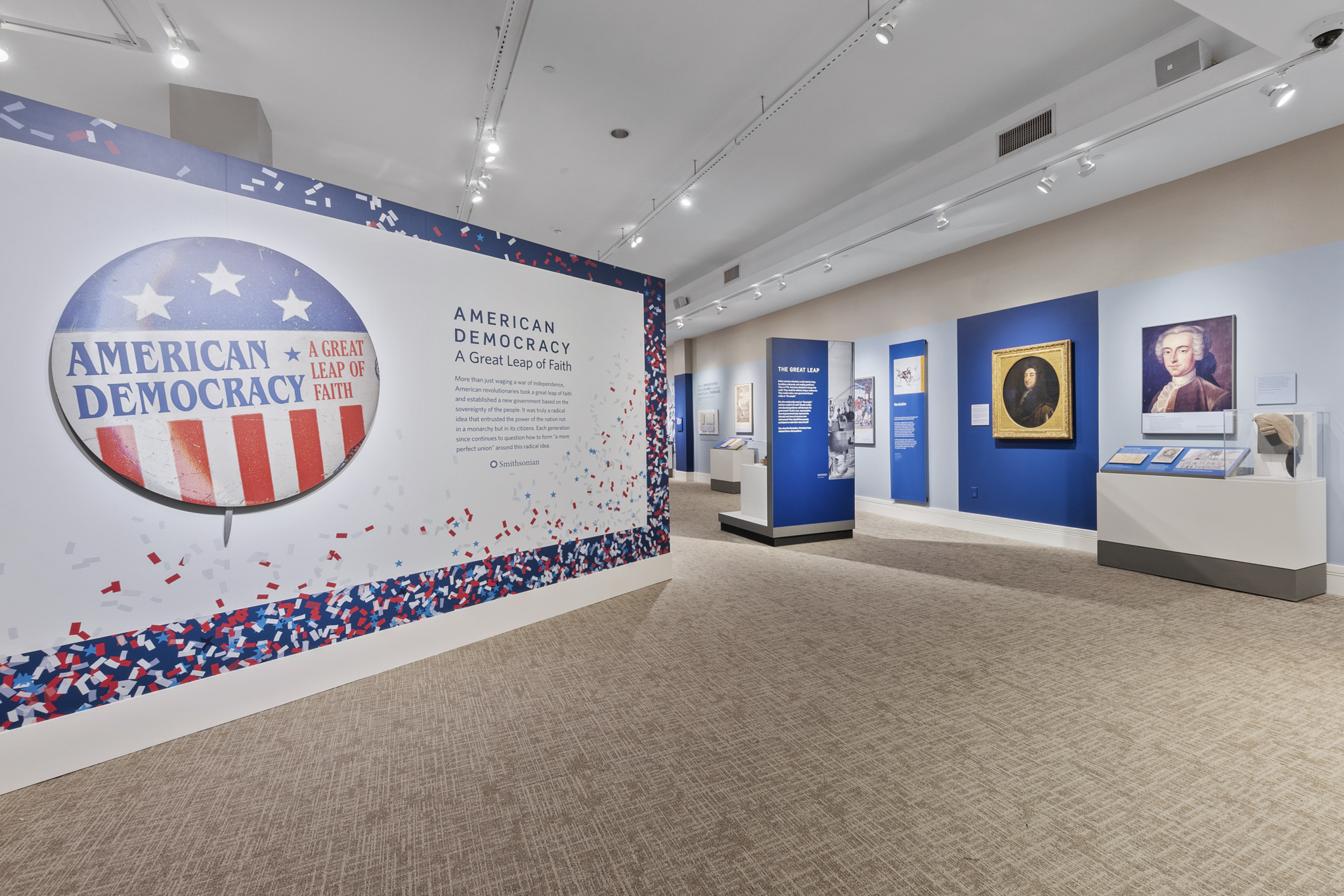 Free for Members!
Not yet a member?

About the Exhibition: In addition to in-exhibition artifacts, audio/video presentations from the Smithsonian and The History Channel and immersive technologies such as touch-screen adventures take visitors beyond the exhibition.  Explore five major themes through this exhibition:

Highlights: George Washington's 1774 letter to Bryan Fairfax about how taxation without representation caused the American colonists to revolt; Edmund Pendleton‘s 1788 record of the Virginia ratification of the U.S. Constitution; an 1833 portrait of Black Hawk (Ma-ka-tai-me-she-kia-kiak) by Robert Mathew Sully, 1833; a 1915 Congressional Union for Woman Suffrage banner; and more.

Image
Edmund Pendleton‘s record of the Virginia ratification of the U.S. Constitution, June 28, 1788

Inside the American Democracy Exhibition

This is the Headline/Intro field on the slideshow component

This is the description field on the slide.

American Democracy: A Great Leap of Faith was developed by the National Museum of American History and adapted for travel by the Smithsonian Institution Traveling Exhibition Service.

The Presidents vs the Press (Wilkinson Lecture 2020)

Learn about the journey to achieve women's suffrage in Virginia.
More
Media

Cosmic Constitutional Theory: Why Americans Are Losing Their Inalienable Rights to Self-Governance

Interested in addressing a problem, making something better, or helping others in your community...
More
Article

Writing the Declaration of Independence, 1776

Learn about Thomas Jefferson and his role in writing the Declaration of Independence.
More
Article

Soon after the Revolutionary War, American leaders realized that they differed in their visions of...
More
Article

The delegates who gathered in convention in Richmond in 1901 to rewrite Virginia’s Constitution had...
More
Media

The Constitution of Virginia: Defining the Political Community

In this October 7, 2021, lecture, A. E. Dick Howard discussed the evolution of Virginia’s...
More
Media

1619: Jamestown and the Forging of American Democracy

The Cabinet: George Washington and the Creation of an American Institution

On November 26, 1791, after waiting two and a half years into his presidency, George Washington...
More
Media

Six Encounters with Lincoln: A President Confronts Democracy and Its Demons

Learn about how the Equal Suffrage League of Virginia helped women gain the right to vote.
More
Media

Curators at Work: These Things Can Be Done Film Discussion

In August 2020, the U.S. celebrated the centennial of the ratification of the 19th Amendment...
More
Media

Soul Liberty: The Evolution of Black Religious Politics in Postemancipation

That churches are one of the most important cornerstones of black political organization is a...
More
Media

Keep On Keeping On: The NAACP and the Implementation of Brown v. Board of Education in Virginia

On September 12, 2019, Brian J. Daugherity delivered the Banner Lecture, “Keep on Keeping On: The...
More
Media

Gerrymanders: How Redistricting Has Protected Slavery, White Supremacy, and Partisan Minorities in Virginia

On January 9, 2020, Brent Tarter presented a Banner Lecture about his most recent book, Gerrymanders...
More
Media

On May 9, 2018, Dr. Paul Finkelman and Dr. Edward L. Ayers engaged in a conversation about Dr...
More
Article

The only surviving judicial robe from John Marshall’s 34 years of service as Chief Justice of the U...
More
Media

John Marshall: The Man Who Made the Supreme Court

Best Seat in the House