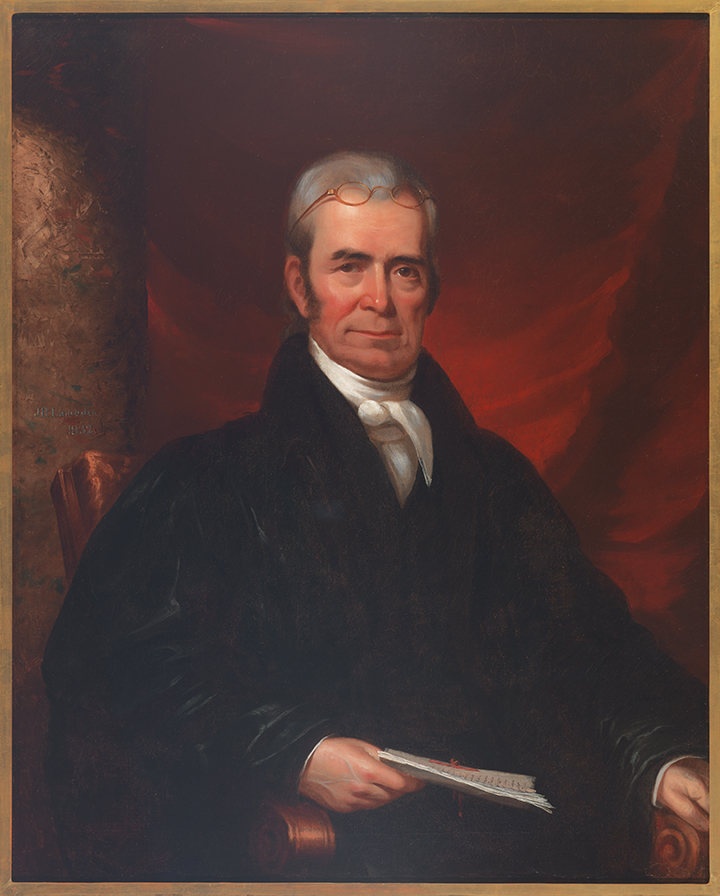 The only surviving judicial robe from John Marshall’s 34 years of service as Chief Justice of the U.S. Supreme Court (1801-1835) is on long-term display at the VMHC as part of our popular The Story of Virginia exhibition. This national treasure is displayed alongside the life portrait of Marshall by James Reid Lambdin and the Chippendale slant-front desk that Chief Justice Marshall, the first president of the Virginia Historical Society, owned and used in Richmond.

This silk garment is the property of Preservation Virginia, which owns the John Marshall House and museum, and which received the robe as a gift in 1913 from Marshall’s granddaughter. With the support of the VMHC, the John Marshall Center for Constitutional History & Civics and others, it underwent extensive restoration to remove brittleness caused by the use of an unstable dye (either logwood or iron gall) to darken it.

John Marshall introduced black judicial robes to represent republican simplicity. The choice contrasted with the scarlet and/or ermine (white) robes worn by British judges and by state court judges. In 1801, during the first session of the Marshall Court, the newly appointed Chief Justice wore this plain black robe while his fellow justices wore red. By the next year’s session, all sitting justices followed Marshall’s example. This modest act set the stage for the unanimity that Marshall advocated for the Court and for the rise of the federal judiciary as a respected, and final, interpreter of the U.S. Constitution.

In contrast to today, when the Supreme Court appears to be so often divided along political party lines, it was different with the Marshall Court. He worked to establish consensus among the justices in order to validate their interpretations of the Constitution. He wrote, “The harmony of the bench will, I hope & pray, never be disturbed.”

Learn more about Marshall through our online exhibition, John Marshall: Hidden Hero of National Union, and these past lectures:

Slant-front Desk by an unidentified cabinetmaker in Eastern Virginia, about 1780–1805, walnut with yellow pine and white oak. Gift of Edna V. Moffet.