Ambler and the Jeannette 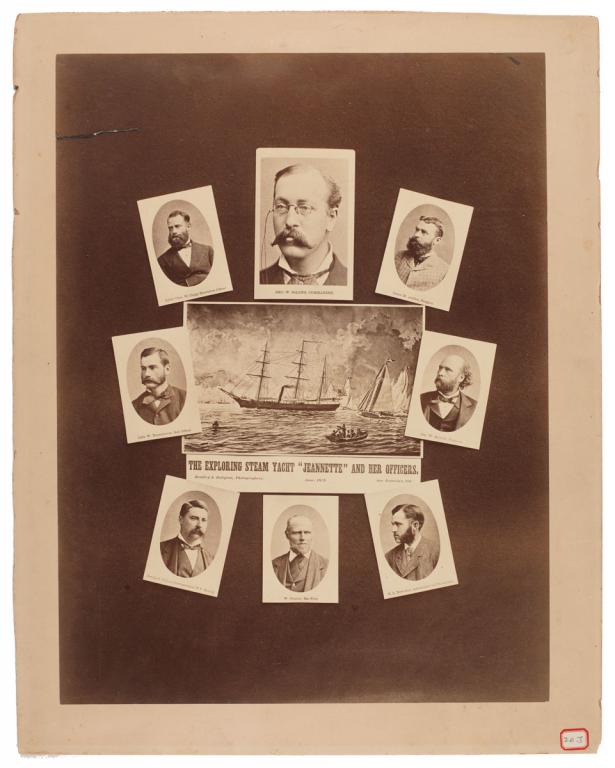 On July 8, 1879, the steamer Jeannette set sail. Its goal: to be the first expedition to reach the North Pole. Earlier that year, Dr. James Markham Marshall Ambler of the U.S. Navy received an offer to be one of the thirty-four crew members. Although many turned it down, the thirty-one-year-old Faquier County native responded, "I respectfully ask to be sent."

Two months after pulling out of San Francisco Bay, the Jeannette became lodged in ice at the edge of the polar icecap, bringing the expedition to a halt for nearly two years. The grim realities of life above the Arctic Circle took a toll on the crew. But, not one to sit idly by, Dr. Ambler organized games and competitions to ease the boredom of the crew, and he led daily exercise classes on the ice. Well versed in the latest medical practices of the day, Dr. Ambler ordered each crew member to drink lime juice with his daily breakfast. This dose of preventative medicine led Chief Engineer George W. Melville to remark in 1883, "In the history of Arctic research there has only been one ship that was free from scurvy; this was the Jeannette."

Then in June 1881, ice began crushing the ship, prompting the captain to issue the order to abandon ship. Dr. Ambler began a new diary, his ice diary, in which he noted the condition of the men, the progress of the crew, and their daily activities.

"I worked hard all day yesterday with a pick...then sleeping in wet clothes in a wet bag on wet ice makes every bone and separate muscle ache in the morning," wrote Dr. Ambler, in his Ice Diary. "Today I have not been able to draw a breath without pain."

Abandoning all hope of reaching the North Pole, they struggled to find their way back home. For nearly five months the men trudged across frozen tundra, navigated icy waters, and weathered inhospitable conditions on their journey to Siberia and ultimately toward safety.

Along the way, the crew became separated into three groups. One drowned at sea during a storm, another safely found its way to a village, and the third wandered in Siberia seeking shelter and food. Dr. Ambler was in this third group. After weeks of wandering, weary and exhausted from lack of food, the men set up camp and agreed to send two from their party to look for assistance. The captain asked Ambler to go as he was one of the healthiest, but Ambler refused to leave the sick. The two men who sought help not only found it but also reunited with the party of eleven survivors led by chief engineer Melville. A rescue party went out, but sadly, Dr. Ambler and the nine other men were not found. Weather forced the rescue party to return to the village of Bulun for the winter.

Later in the spring, Dr. Ambler's body along with the others were found beneath a foot of snow. Gripped in Ambler's hand was the captain's pistol; in his pocket was his diary. The entry dated October 20, 1881, is a tender farewell to his family. The diary and a few of Ambler's personal effects were given to his mother and later donated to the Virginia Historical Society.

Dr. Ambler Diary
“My dear brother, I write these lines in the faint hope that by God’s merciful providence they may reach you all at home. I have myself now very little hope of surviving. We have been without food for nearly 2 weeks.” 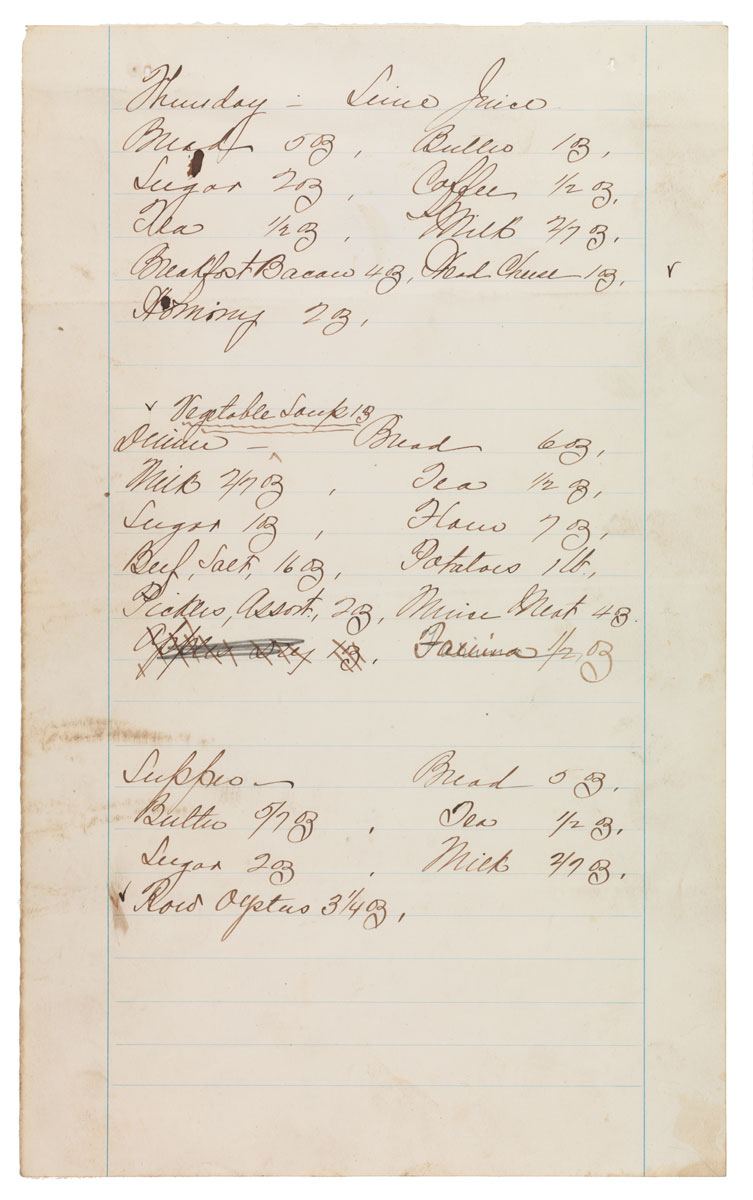 Menu from the Nash papers
Several years after the Jeannette’s departure, Dr. Francis S. Nash joined an Arctic expedition to rescue the Greely (1884–85). This menu details the daily rations and is no doubt similar to that on the Jeannette. Notice that lime juice tops the list. (VHS call number: Mss1 N1786 a 8043)

Ambler medal
This medal was issued to Dr. Ambler “in commemoration of perils encountered and as an expression of the high esteem in which Congress holds his service.” The act was approved September 30, 1890.

“Wherever we were and whatever our situation, Ambler proved himself a skilled physician, an excellent officer and a noble man.” George W. Melville, chief engineer of Jeannette and one of 13 survivors. (VHS accession number: 1983.43)
Image 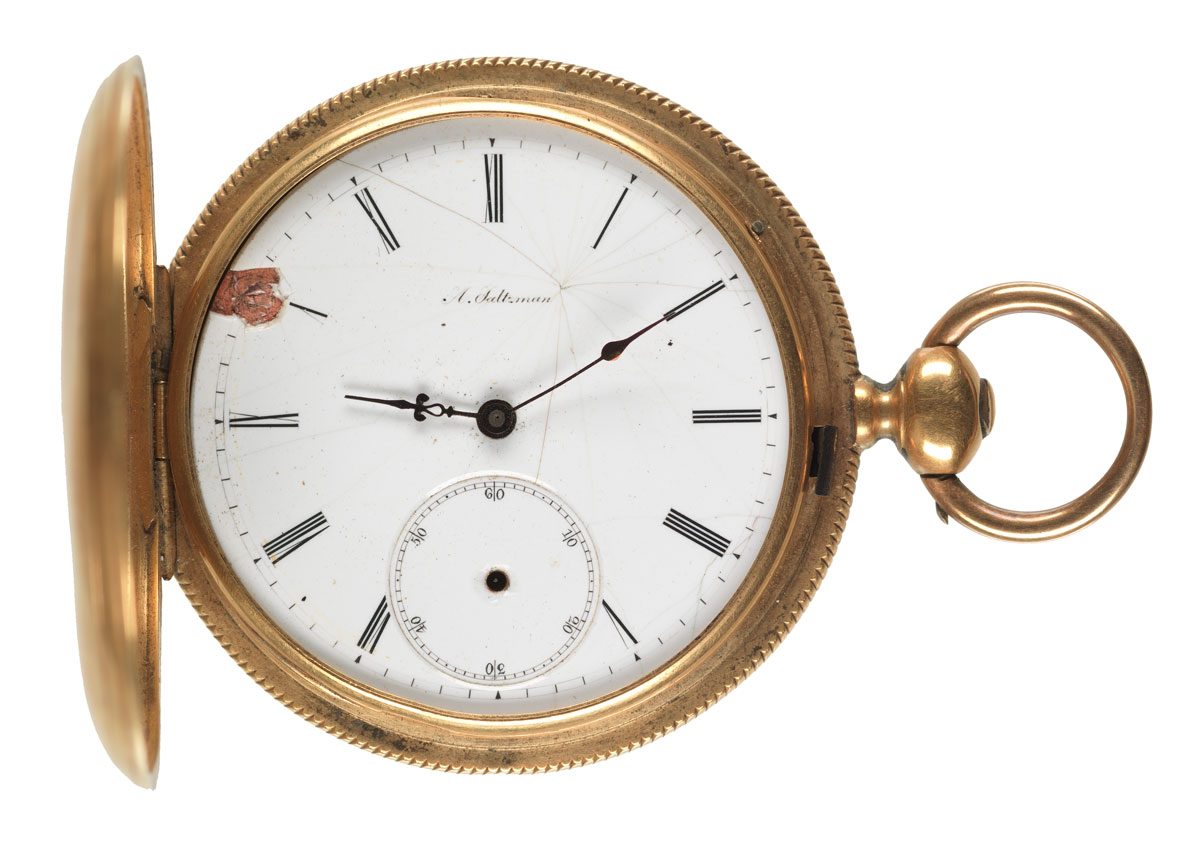