Following the success of his The Birds of America, John James Audubon began to gather material for an equally ambitious project to document the animal life of North America. The results of the artist-naturalist's years of research and field study was the Viviparous Quadrupeds of North America, the outstanding work on American mammals of its time and a superb example of color lithography. Audubon included many frontier animals never before depicted, and his 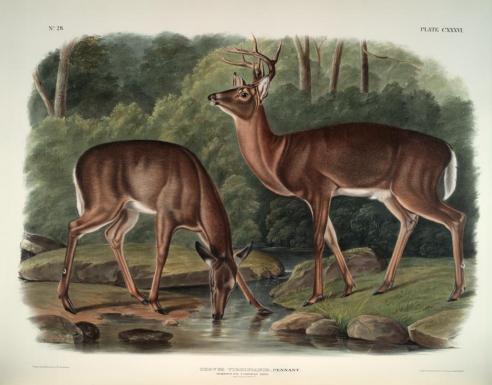 Audubon collaborated with the Reverend John Bachman, a Lutheran minister and experienced student of mammalogy, who later wrote much of the scientific text. Audubon collected specimens sent to him by friends, and in 1843 he made a final expedition up the Missouri to do more field work. He envisioned Viviparous Quadrapeds (literally meaning four-footed mammals) as the definitive record of all North American mammals. Bachman warned Audubon, who was not a trained naturalist, that he had underestimated the scope of the mammal population, and they agreed to eliminate bats and marine animals. By 1846 Audubon's health was failing and his son, John Woodhouse, made substantial artistic contributions, eventually completing half the plates for Quadrapeds. Another son, Victor, served as editor and business manager.

Despite the difficulty of marketing colorplate books in America, Quadrapeds was a commercial success and was published in two sizes and several editions between 1845 and 1854. The elephant folio edition shown here contains a number of animals from Virginia such as this plate of the "Virginian Deer." 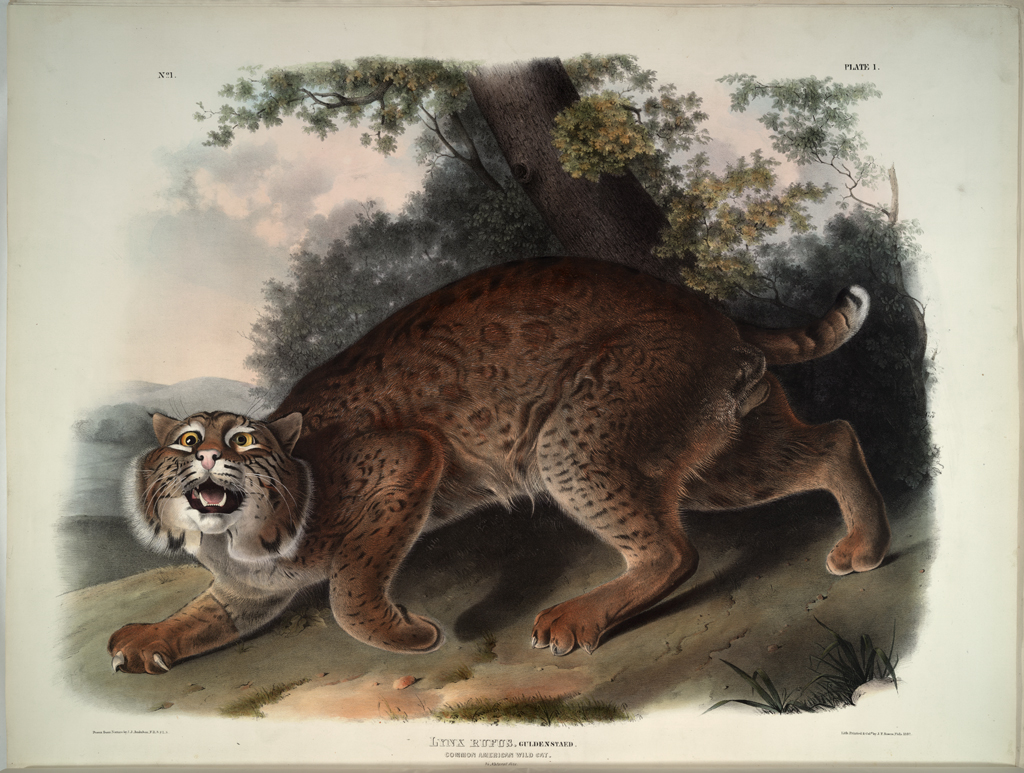 Bobcat from The Viviparous Quadrupeds of North America (1845–48)
This medium-sized cat is found throughout Virginia, although the greatest concentration is in Southwest Virginia, the Valley, and the Blue Ridge and Allegheny Mountains. The bobcat is very secretive and preys on small game and only occasionally kills livestock. (VHS call number: Rare Books QL715 A916 1845 folio)
Image 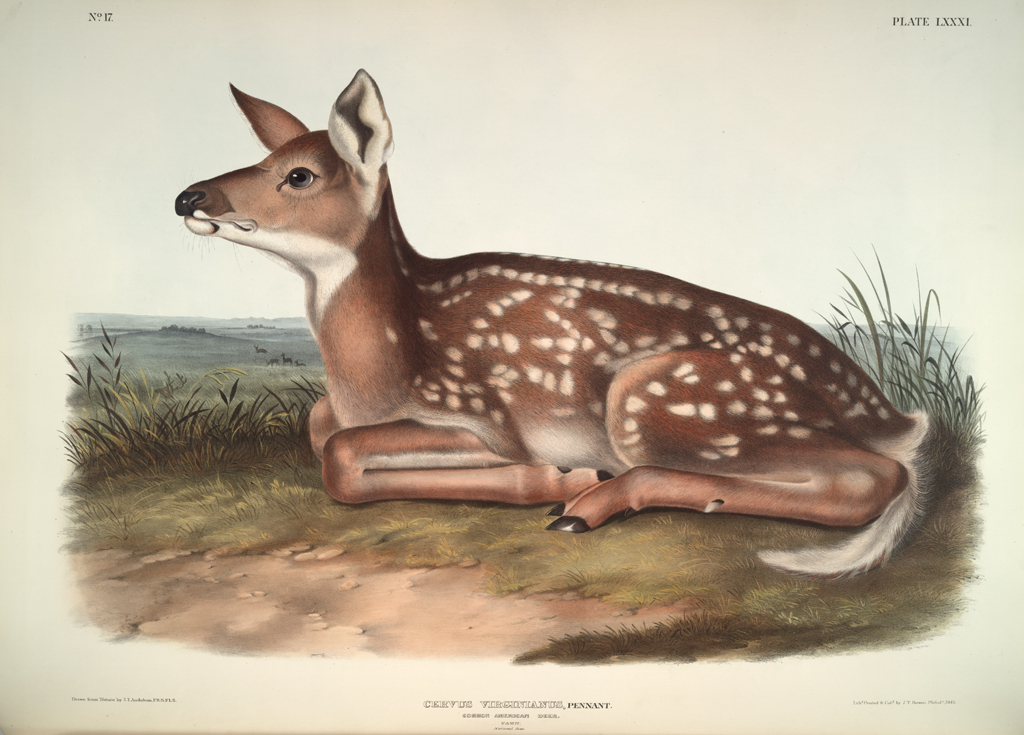 Virginian Deer from The Viviparous Quadrupeds of North America (1845–48)
Audubon thought that deer were interesting, useful, and tasty: "The tender, juicy, savory, and above all digestible qualities of its flesh are well know, the skin is of the greatest service . . . from the horns are made beautiful handles for various kinds of cutlery. It does but little damage to the fields of the planter, and it is a universal favorite with old and young of both sexes in our Southern states." No longer a universal favorite, the white-tailed deer was nearly extinct in 1900. The population rebounded, however, and now is controlled through the Deer Management Plan of the Department of Game and Inland Fisheries. The estimated one million deer in Virginia have a profound impact on the native forest ecosystem. (VHS call number: Rare Books QL715 A916 1845 folio)
Image 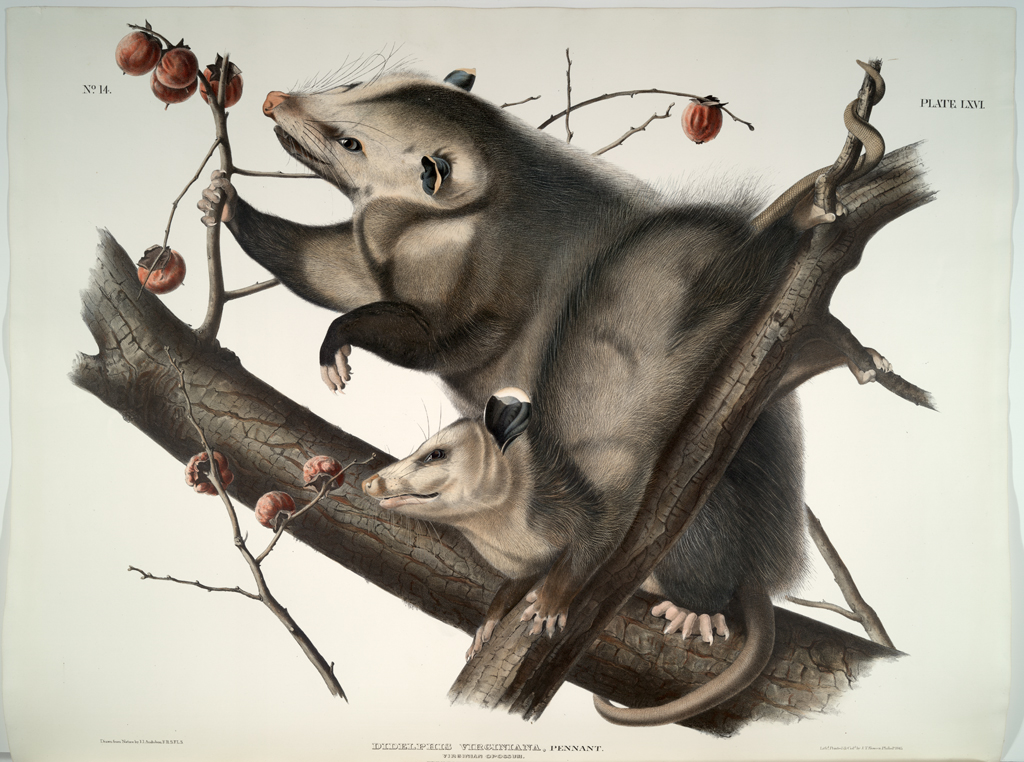 Virginia Opossum from The Viviparous Quadrupeds of North America (1845–48)
Audubon imagined the surprise felt when Europeans saw their first opossum: "Here was a strange animal, with the head and ears of a pig, sometimes hanging on the limb of a tree, occasionally swinging like a monkey by the tail." "The astonished traveler approaches this extraordinary compound of an animal and touches it gently with a stick. Instantly it seems to be struck with a mortal disease . . . and appears dead! He adds a new term to the vocabulary, that of 'playing possum.'" This native species of marsupial is found in all Virginia counties. (VHS call number: Rare Books QL715 A916 1845 folio)
Image 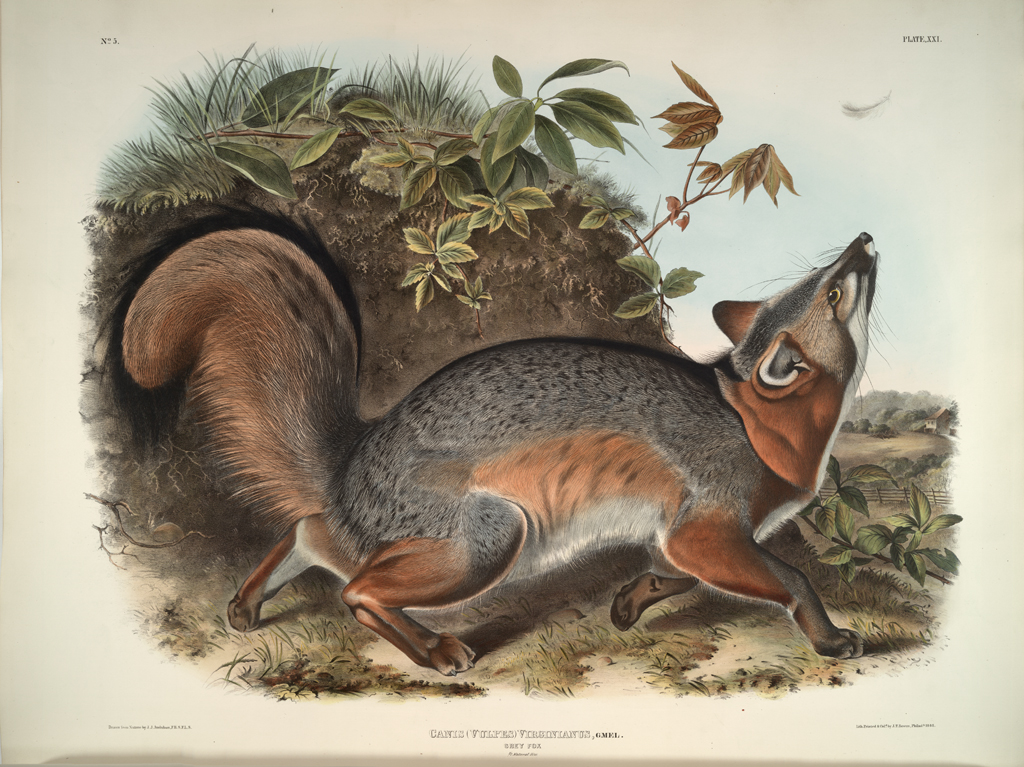 Grey Fox from The Viviparous Quadrupeds of North America (1845–48)
Described by Audubon as "a pilfering thief," the fox is a cunning hunter who should not be condemned too hastily because "he kills only what he can eat, unlike some hunters." Audubon described the popularity of fox hunting and noted that in southern states it is regarded as "healthful and manly exercise." He also tried to domesticate a fox but said, "As a pet, however, we have not found him particularly interesting. It is difficult to subdue the snappish disposition of this species, and we have never seen one more than half-tamed." (VHS call number: Rare Books QL715 A916 1845 folio)