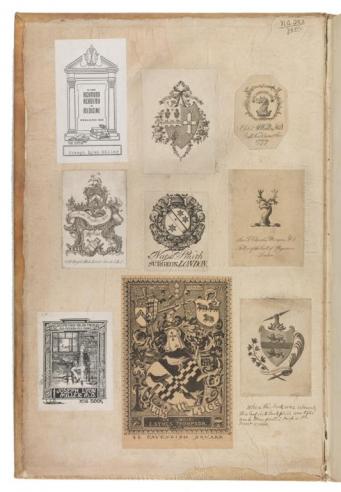 The use of bookplates is almost as old as printing itself. They were used to record ownership and to reassure the owner that a borrowed book would be returned. The early designs were heraldic and engraved on copper, and then paper labels became a more popular and inexpensive choice. Various styles were used during certain periods, and this makes it possible to date most bookplates.

The pride of ownership and the different styles of bookplates can be traced in this remarkable book. Considered to be one of the most beautiful medical books ever published, this copy of Vesalius’s work on anatomy has bookplates and signatures that document ownership for more than 350 years. The first owner, George Baker (“Ex Libris Georgio Baker 1570”), served as one of Queen Elizabeth I’s surgeons, and another owner, Thomas Wharton, was one of the few doctors who stayed and treated patients during the London plague of 1665. The last private owner was Joseph Lyon Miller, a Virginia physician and rare book collector.

Many of the other bookplates shown here were donated by Beveley Randolph Wellford, a physician, collector, and officer of the Virginia Historical Society. 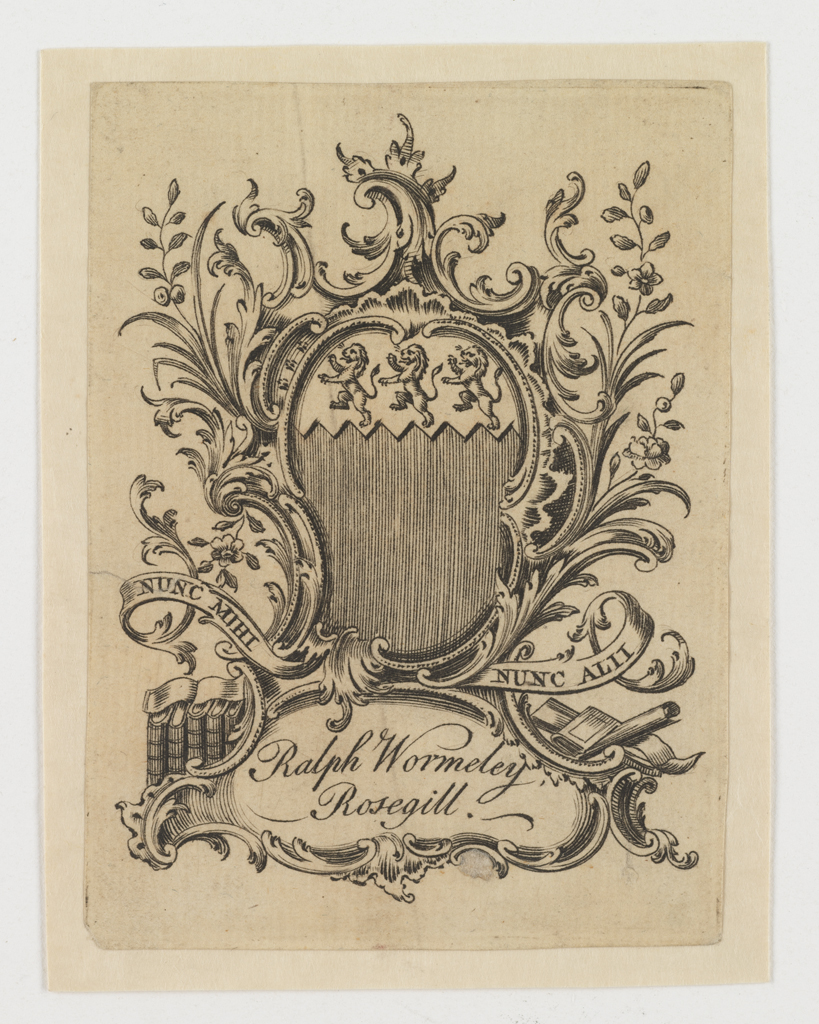 Ralph Wormeley's bookplate
The earliest bookplates in the collection are associated with prominent families in colonial Virginia. Bookplates displaying coats-of-arms became increasingly ornate in the 1700s and were often imported from England. Ralph Wormeley (1745–1806) of Rosegill, Middlesex County, used this elaborate Chippendale-style armorial plate on his bookplate. He assembled a large library, and many of the volumes are now part of the collections of the Virginia Historical Society. (VHS accession number: 2012.1.4 [Wellford collection])
Image 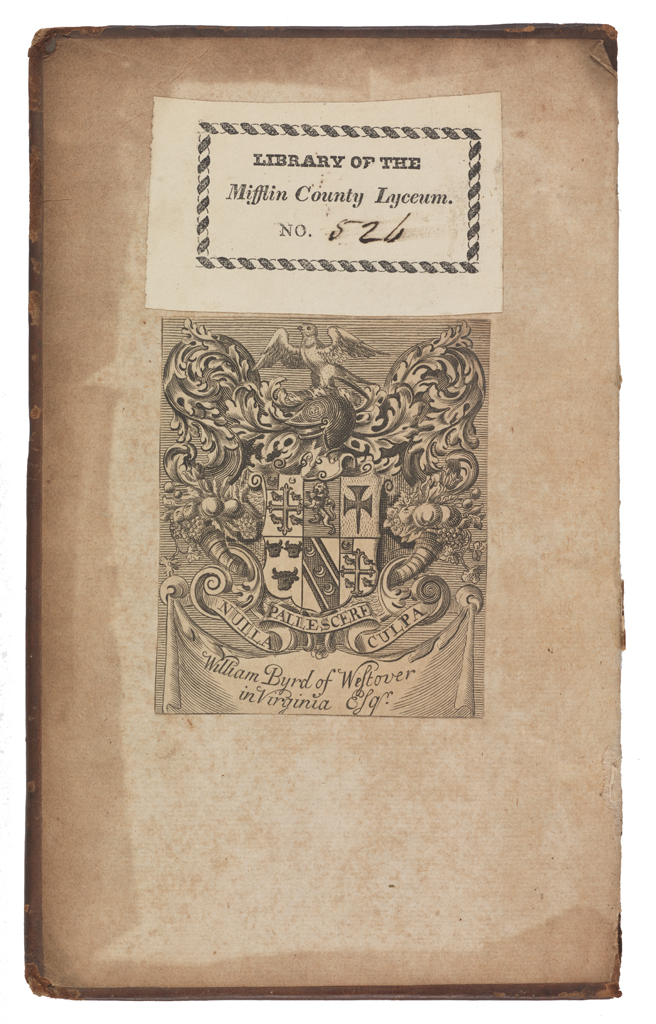 Reflections upon Learning, William Byrd's bookplate
At the time of his death in 1744, William Byrd of Westover had the greatest private collection of books in colonial America. According to Charles Dexter Allen, an authority on bookplates, Byrd’s Jacobean book plate is "a very interesting specimen of its class. The profuse mantling thrown high in the air, the shell-lined background, and the curtain upheld at the ends are prominent characteristics. A rich abundance of fruit overflows from two cornucopias, and the motto-ribbon is twined in and out through the scrolls at the base." The Latin motto means “To turn pale from no crime." (VHS call number: Rare Book Z986 B95 B17 1700)
Image 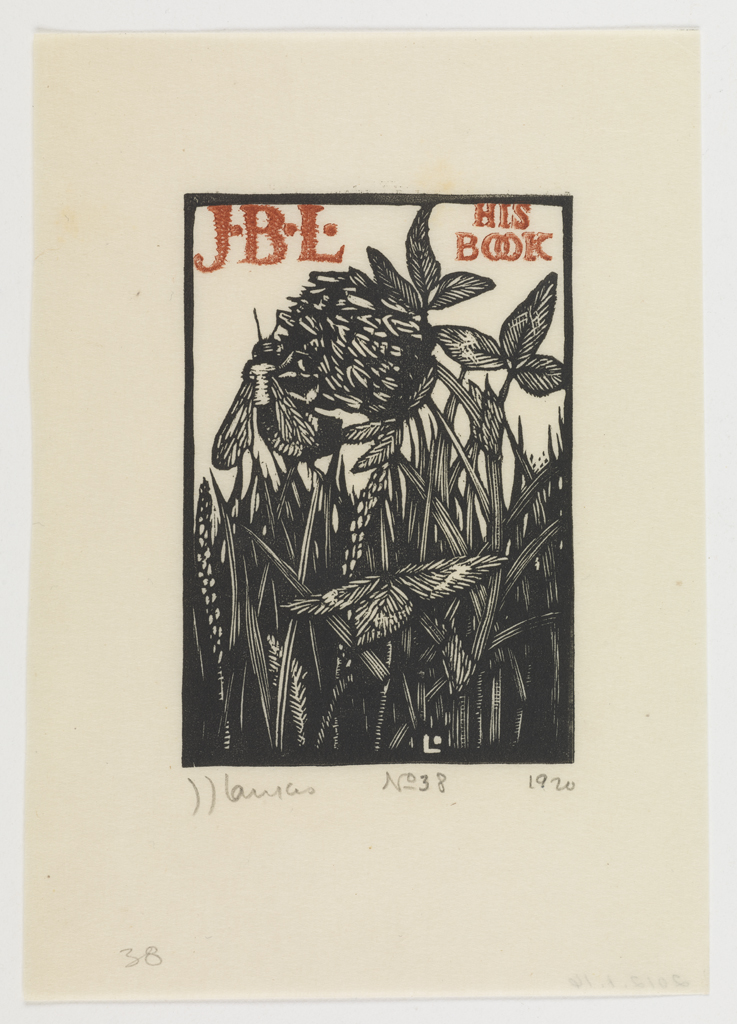 Julius John Lankes, bookplate
Noted artist J. J. Lankes (1884–1960) helped revive the art form of the traditional woodcut. He moved to Virginia in 1925, and many of his woodcuts depict scenes of life in Tidewater. He also did book illustrations for such writers as Robert Frost, Sherwood Anderson, and Ellen Glasgow. Lankes advertised that "[t]he quality of design in a bookplate reveals the taste of the owner, and naturally no one with good taste would affix a bookplate of poor design to a fine or cherished book." (VHS accession number: 2012.1.15)
Image 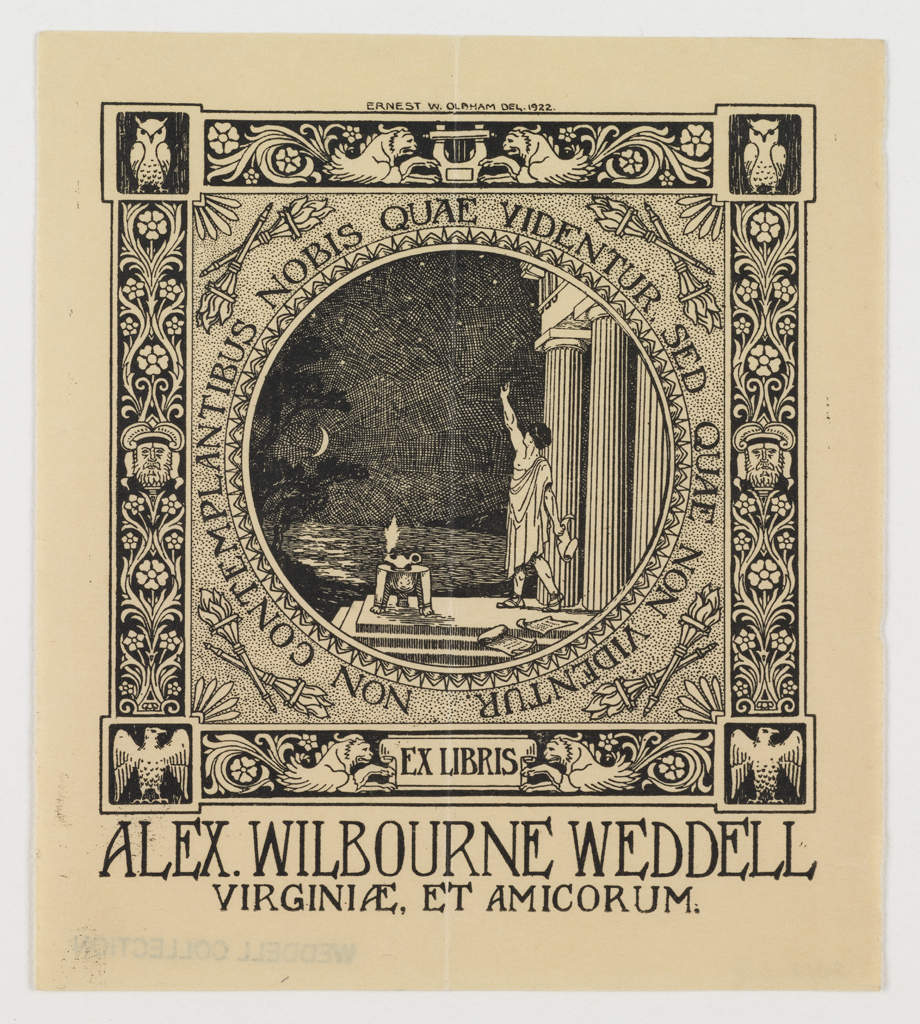 Alexander W. Weddell's personal library bookplate
Diplomat and president and benefactor of the Virginia Historical Society, Alexander Wilbourne Weddell’s (1876–1948) bookplates reflect different stages in his life. One plate was presumably used when he was a young man, and he had another plate designed later for his personal library (shown here). A third plate was used for the extensive library he assembled at his home, Virginia House. (VHS accession number: 2012.1.5 [Wellford Collection])