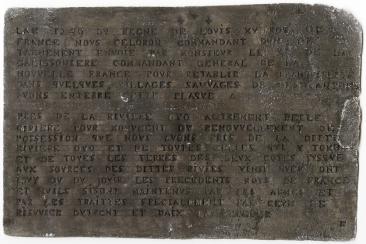 One of the most important artifacts to survive from Virginia’s colonial period, this lead plaque was placed at the junction of the Kanawha and Ohio Rivers in 1749 by Captain Pierre Joseph Céloron de Blainville. Five other plates were laid along other tributaries of the Ohio River to assert France's claims to all the lands watered by those rivers. Under its 1609 charter, Virginia claimed those lands, too. News of the lead plates reached Williamsburg, and a young Lt. Col. George Washington was sent west by the royal governor to confront the French. The battle Washington initiated in May 1754 resulted in an escalation of hostilities between France and Great Britain that erupted in the Seven Years’ War in Europe and the French and Indian War in North America. This is the only plaque that survives intact.

“In the year of 1749, of the reign of Louis the 15th, King of France, we Céloron, commander of a detachment sent by Monsieur the Marquis de la Gallissonieré, Governor General of New France, to reestablish tranquility in some Indian villages in these provinces, have buried this plate at the mouth of the River Chinodahichiltha on the 18th of August near the River Ohio, otherwise Beautiful River, as a monument of the renewal of the possession we have taken of the said River Ohio, and of all those which empty into it, and of all the lands on both sides as far as the sources of said rivers, as enjoyed or ought to have been enjoyed by the kings of France preceding, and as they have there maintained themselves by arms and by treaties, especially those of Ryswick, Utrecht, and Aix la Chapelle.”

The Céloron plate is one of the most treasured among artifacts held at the VMHC. Over the years, corrosion has occurred on the piece, despite the special care taken in its display. The plate is endangered by fluctuating climate conditions, as well as the lead’s reaction to other materials, such as Plexiglass. As lead is highly susceptible to corrosion because of exposure to humidity, pollutants, and gases emitted by traditional case materials (wood, Acrylic), a new state-of-the-art case is being constructed from metal and glass with an air-tight seal. A removable tray for silica gel, a desiccant used to reduce moisture in the air, will be built into the bottom of case to maintain a desired relative humidity of 40 percent. The case will also be constructed with a detachable base which will allow the plate to be raised to an appropriate height for exhibition.