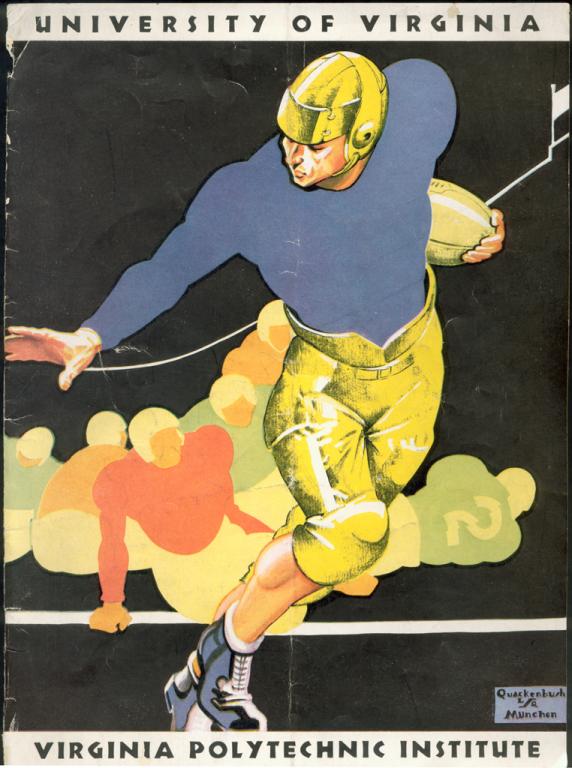 For more than a century, when summer fades many Virginians have turned their thoughts—and their passions—to football. Although first popularized in the northeast as a version of English rugby, by the late nineteenth century many southern colleges and universities had enthusiastically picked up the sport.

Although collegiate and high school football are an entrenched part of American leisure culture today, the sport endured several periods of rigorous public debate from the 1890s through the 1910s. The University of Virginia featured prominently in some of these debates. Although enthusiasts touted the benefits that physical fitness, discipline, and competition instilled among players, critics pointed to the violent nature of the game. In the early years, players frequently employed clothes-line tackles, "line plunges," and outright punches during games—all the while without the benefit of helmets, and with only minimal padding. More than a few players died as a result of their inevitable injuries, prompting some schools to ban the sport and providing football's opponents with compelling arguments. The University of Virginia's Archer Christian died after sustaining injuries during a game at Georgetown on November 13, 1909; just two weeks earlier, an Army player, Eugene Byrne, had met a similar fate after a game against Harvard.

The players' deaths reignited a debate that had been simmering for some time. In an era of reform, football once again became a hotly contested issue. Among the more vocal critics in Virginia was John Singleton Mosby (1833–1916), the lawyer and former Confederate cavalryman. Edwin Anderson Alderman (1861–1931) served as the president of the University of Virginia at the time, and though a supporter of the game, he recognized that the threat of serious injury had to be reduced. To that end, Alderman helped push for reforms. In December 1909, he addressed a meeting of the Inter Collegiate Athletic Association (a forerunner of the National Collegiate Athletic Association, or NCAA). Alderman reportedly spoke poignantly about the death of Archer Christian while urging colleagues from across the country to make the game safer rather than banning it altogether. The organization instituted new rules in 1910.

With new safeguards in place, and serious injuries abating, football's popularity soared in the 1910s. Intense school rivalries—already in place for two decades in the Old Dominion—intensified, and remain with us today. Game programs and other ephemera in the collections of the Virginia Museum of History & Culture document Virginians' long-standing love affair with football. 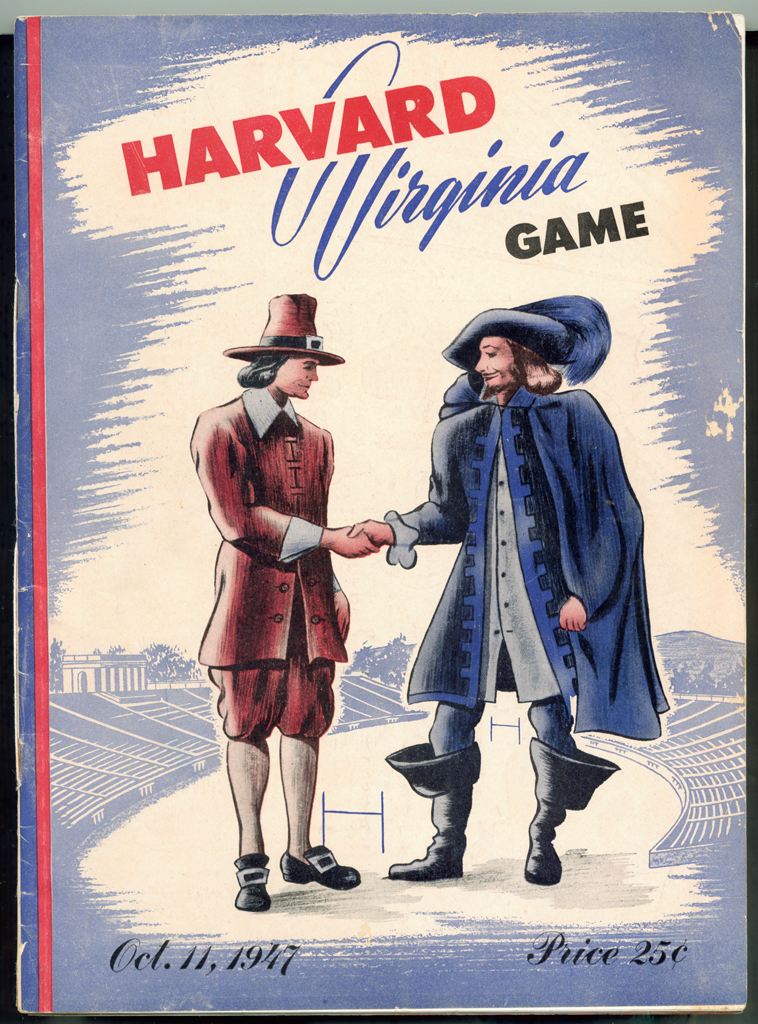 Program, Harvard versus the University of Virginia, October 11, 1947
The image in this program evokes both schools’ pride in the history of their respective commonwealths. (VHS call number: GV691 V8 F68)
Image 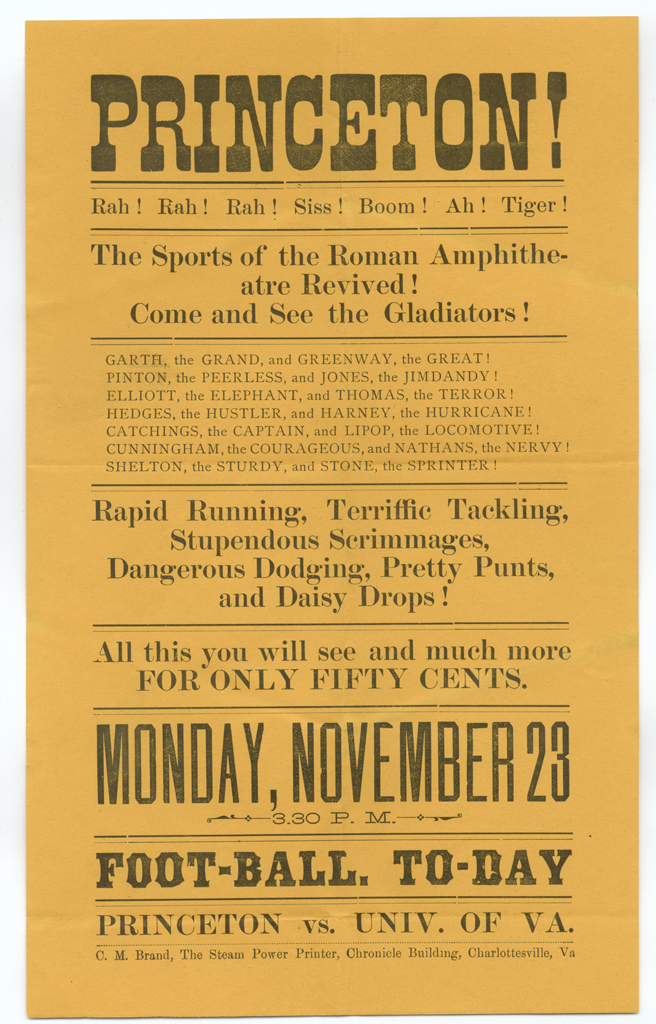 Broadside advertising a game between Princeton and the University of Virginia
This broadside for a Princeton-Virginia game advertised “Stupendous Scrimmages” and “Daisy Drops” executed by “Gladiators.” In 1891, admission was fifty cents. (VHS call number: Broadside 1891:23)
Image 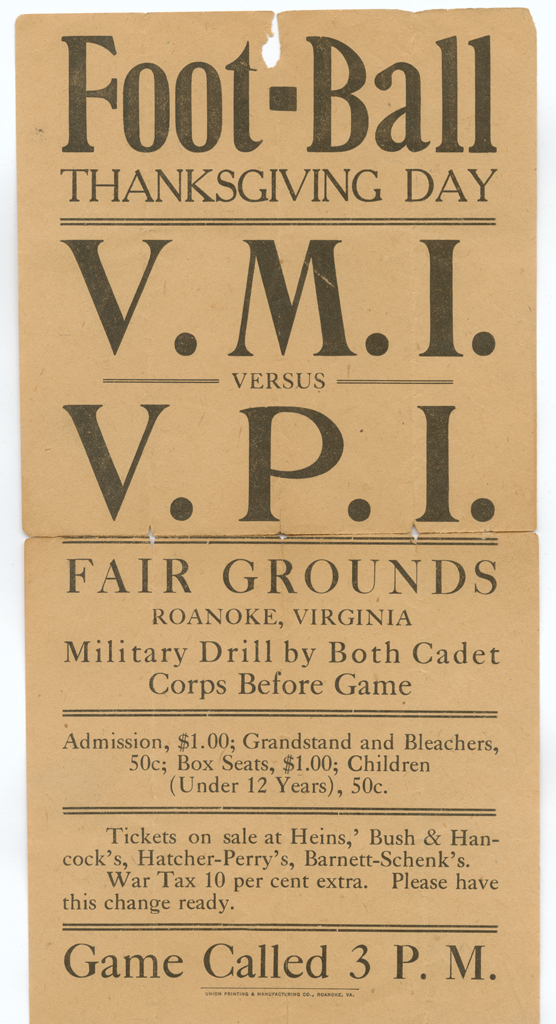 Broadside advertising VMI versus Virginia Tech, 1918
In the early twentieth century, Virginia Tech was a military school, making their rivalry with the Virginia Military Institute especially intense. This game, most likely played in 1918, featured "Military Drill" by both schools before the contest. Virginia Tech prevailed 6-0 in a hard-fought game. (VHS call number: Mss1 En354 a 7)
Image 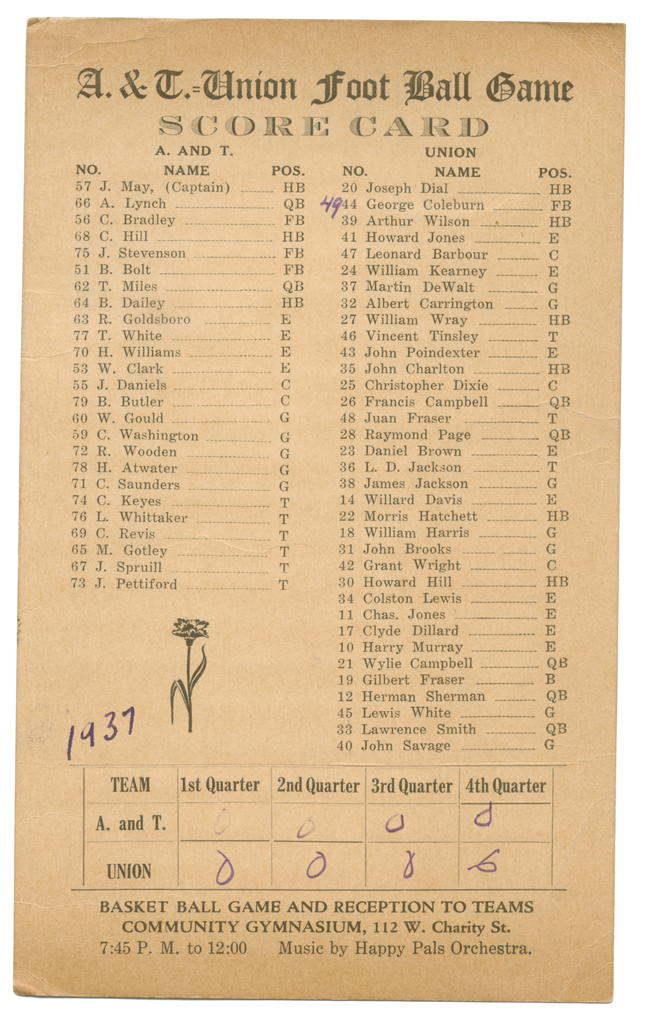 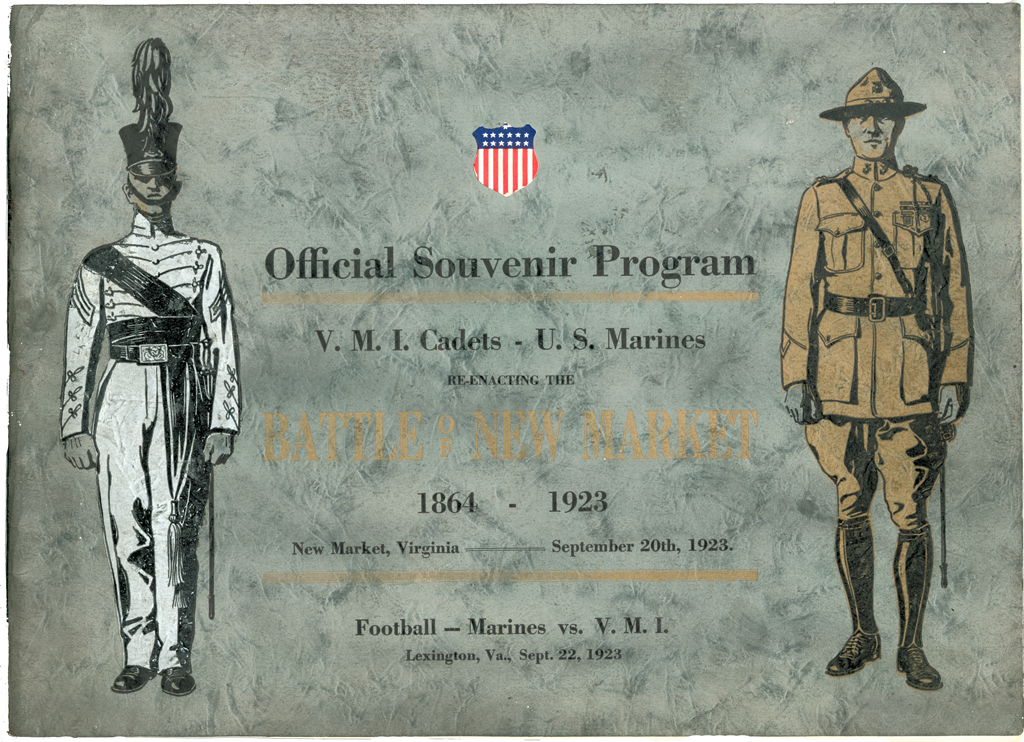 Official Souvenir Program, V.M.I. Cadets versus U.S. Marines, 1923
In September 1923, V.M.I. and the U.S. Marines took part in both a football game and a battle reenactment. On September 20th, the cadets and Marines combined to reenact the Battle of New Market, a Civil War engagement where VMI cadets played an important role in the Confederate victory. Two days after the reenactment, on September 22, 1923, VMI's football team competed against a squad of U.S. Marines. (VHS call number: E476.64 O32 1923)