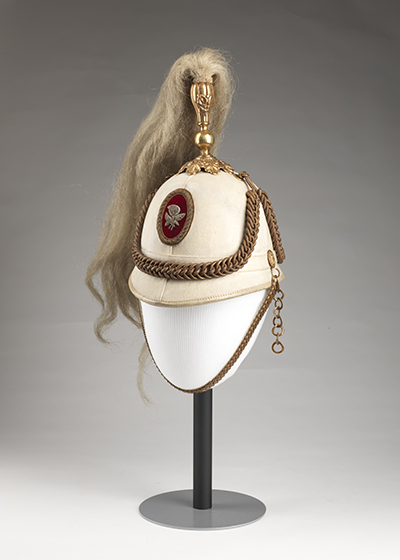 Race has been a divisive issue throughout American history, and this impressive helmet tells part of the story. Once belonging to Edward A. Washington of Richmond, it was a piece of ceremonial regalia of the Colored Knights of Pythias, a black fraternal organization that rose to prominence in Richmond – and across the nation – in the late 19th and early 20th centuries.

The original Knights of Pythias, founded in 1864 in Washington by white government workers, was a secret benevolent society devoted to promoting peace, brotherhood and philanthropic service. The Knights became one of America’s largest fraternal orders of the period (along with the Masons and the Odd Fellows). Its name and mission drew on the Greek legend of Damon and Pythias, the story of one man’s willingness to sacrifice his life for a friend.

Open to all races, this order quickly spread across the nation, reaching a peak enrollment of nearly 200,000 (mostly black) members in the 1920s. Richmond had an especially active Pythian lodge that became a leading economic, social, and cultural force in the city’s Black community. The Colored Knights fostered camaraderie among members, performed charitable acts, and provided vital social services such as sick pay, life insurance, and banking.

The Colored Knights also enjoyed a certain degree of pageantry – evident in this helmet's horsehair plume, gilded straps, and heraldic crest. Some ranks of Knights wore this headgear with their military-like uniforms when they marched in public parades. Throughout the 1890s and early 1900s, black Richmonders flocked to see the splendidly dressed Knights parading down the streets of black neighborhoods such as Jackson Ward.

This artifact embodies the pride and civic spirit of African-Americans who sought to build vibrant communities, improve lives, and combat segregation. Although the popularity of fraternal orders declined after the Great Depression, the Pythian motto of "Friendship, Charity and Benevolence" still serves as an aspirational ideal today.

The helmet is on display in our long-time exhibition, The Story of Virginia.

The original version of this article was published in the Richmond Times-Dispatch’s Discover Magazine as Artifact spotlight: Colored Knights of Pythias helmet” on August 12, 2018. View original article.