Craddock-Terry Records Walk on Over to the Museum 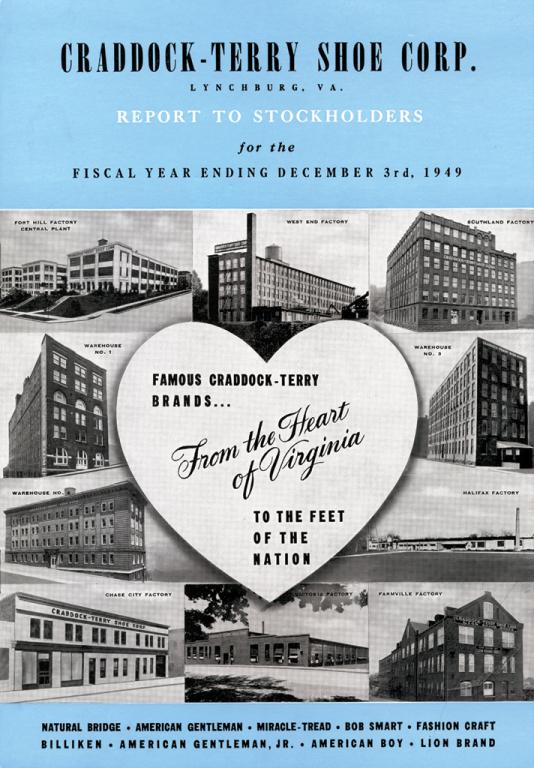 Early in 2007, former Vice President and Senior Archivist E. Lee Shepard answered one of those telephone calls that curators love to receive. Douglas Harvey of the Lynchburg Museum System was on the line to alert us to a large collection of records of the Craddock-Terry Shoe Company, once the largest employer in Lynchburg. Craddock-Terry lines of boots and shoes, such as Natural Bridge, American Gentleman, and Billiken, were mainstays in the national footwear market for decades. The opportunity to secure the company’s records for our Reynolds Business History Center proved both welcome and timely.

The records were scattered in a number of locations. Some had been salvaged from the corporate headquarters by a former company officer, Gordon Hobbs, and placed in the temporary care of the Jones Memorial Library in Lynchburg. A few others were in private hands, and a large cache remained in one of the old factory buildings scheduled for complete renovation. Museum archivists had to act fast. With the crucial assistance of Harvey and Wayne Rhoades of the Jones Library, we brought a truckload of materials to Richmond to reconstitute the company archives.

Comprising board of directors minute books, sales records, promotional materials, factory records, photographs, and a host of other materials, the collection preserves in marvelous detail the history of one of Piedmont Virginia's most significant businesses. From its establishment in 1888 by John W. Craddock, T. M. Terry, and A. P. Craddock through the financially challenging final decades of the twentieth century, the company played a dominant role in one of the most highly competitive industries in the United States.

A special word of thanks must be expressed to those persons and companies who made the preservation of these records possible: Riverviews Artspace of Lynchburg, M & O Corporation of Charlottesville (through the courtesy of Oliver Kuttner), and the family of Roland K. Peters. Saving these papers was the first step; processing this very large collection, with its significant conservation challenges, is the next. As is the case with many of our huge corporate collections, the museum is currently seeking special funding to support that important effort.

Would you like to learn more about Virginia businesses? Visit the Reynolds Business History Center.