On October 16, 1859, John Brown led eighteen followers in a raid on the federal arsenal and armory at Harpers Ferry, Virginia. Brown planned to use the weapons seized to arm slaves and initiate a general uprising. No one rallied to Brown’s banner, however, and the insurrection collapsed. On October 18, a detachment of marines under Brevet Colonel Robert E. Lee attacked the engine house of the armory where the raiders held a handful of hostages. Most of Brown’s men were killed in the attack, and he was wounded. Captured and arrested for treason, he was found guilty and sentenced to death. On December 2, 1859, John Brown was hanged in Charlestown, Virginia.

The event did not go unnoticed by William Gwathmey, a King William County planter and physician. Like many farmers he kept a diary, recording details about the weather, farming operations, physician’s visits, and activities at the Beulah Baptist Church. Only occasionally did national events intrude on his daily routine. However, on the date of Brown’s execution, Gwathmey wrote, “old ossawatomie Brown to be hanged at Charlestown for murder and insurrection—wicked beast[ly] man.” Gwathmey’s diary entries on this and subsequent days give us a glimpse into the fear, anger, and confusion of a white Virginia planter in response to the Harpers Ferry raid. 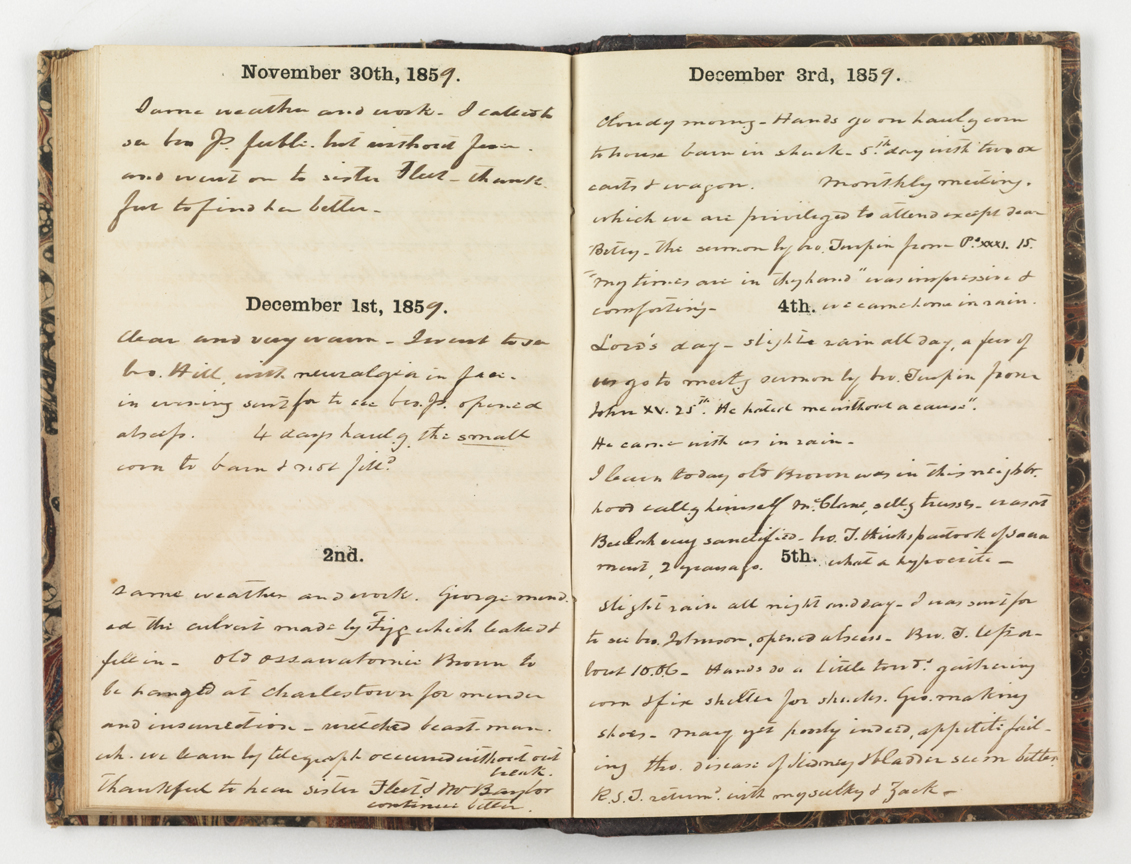 Gwathmey’s reference to “old ossawatomie” suggests his knowledge of Brown’s role in the fighting between anti-slavery and pro-slavery forces in Kansas. He wrote that the hanging “occurred without outbreak,” revealing a fairly common fear among white southerners that abolitionists would attempt to rescue Brown. Two days later, he wrote that he heard “old Brown was in this neighborhood call[in]g himself McLane sell[in]g trusses.” This statement attests to the power of rumor. John Brown was never in King William County, and Gwathmey’s acceptance of a reported sighting reveals more about his fears than it does about the abolitionist’s travels. The claim that Brown was selling trusses (devices worn for support) may be a way of demystifying and emasculating him. It also reinforces the notion held by many slaveholders that the abolitionists were unmanly and effeminate.

Gwathmey and other white people in the congregation at Beulah undoubtedly found solace in the passages read by Brother Turpin that day, especially Christ’s words to his disciples: “They hated me without a cause” (John 15:25). Gwathmey recorded these as “He hated me without a cause.” Perhaps Turpin chose this reading in response to John Brown’s address to the court in Charlestown after his sentencing a month earlier:

“This court acknowledges, as I suppose, the validity of the law of God. I see a book kissed here which I suppose to be the Bible, or at least the New Testament. That teaches me that all things whatsoever I would that men should do to me, I should do even so to them. It teaches me, further, to ‘remember them that are in bonds, as bound with them.’ I endeavored to act up to that instruction. I say I am yet too young to understand that God is any respecter of persons. I believe that to have interfered as I have done—as I have always freely admitted I have done—in behalf of His despised poor was not wrong, but right. Now, if it is deemed necessary that I should forfeit my life for the furtherance of the ends of justice, and mingle my blood further with the blood of my children and with the blood of millions in this slave country whose rights are disregarded by wicked, cruel, and unjust enactments—I submit; so let it be done!”

This article was written by Bill Obrochta while serving as the Manager of Educational Services at the Virginia Museum of History and Culture.