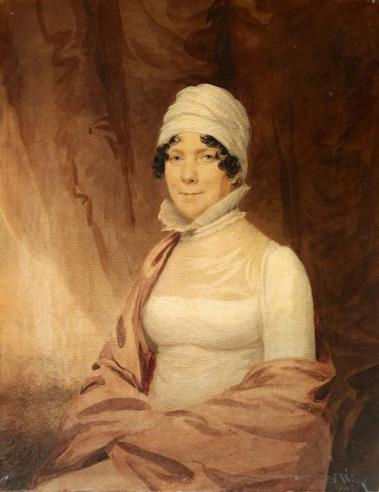 Dolley (Payne) Todd Madison (1768–1849) lived through three wars, knew eleven presidents, and was a gracious and influential personality in the political landscape of Washington for fifty years.

Born on May 20, 1768, while her Virginia parents were temporarily in North Carolina, Dolley Payne was raised at Scotchtown near Ashland, Virginia. Her parents were Quakers, and in 1783 the family moved to Philadelphia where Dolley later married John Todd, Jr. Her husband and infant son both died during a yellow fever epidemic in 1793. Dolley and her other son, John Payne, barely survived.

A year later Aaron Burr introduced her to James Madison, whom she soon married. Dolley, seventeen years younger than her husband, outgoing and socially skilled, was a contrast and a complement to James, a brilliant yet reserved statesman who valued his wife's abilities as a host. Her abilities enhanced her husband's popularity, and one of his opponents once lamented, “I was beaten by Mr. and Mrs. Madison. I might have had a better chance had I faced Mr. Madison alone.”

The Madisons lived at his Orange County estate, Montpelier, until President Thomas Jefferson appointed James as his secretary of state in 1801. As the wife of the ranking Cabinet official, Dolley served as the unofficial First Lady for the widowed Jefferson. Her genuine graciousness and political tact made her a popular, if unconventional, figure on the Washington scene during her husband’s two administrations.

Despite her Quaker upbringing, Dolley played cards, dipped snuff, and enjoyed the latest fashions. And she ensured her place in history textbooks by rescuing important state papers and a portrait of George Washington when the British set fire to the White House during the War of 1812.