Civil Defense in Virginia in the 1950s 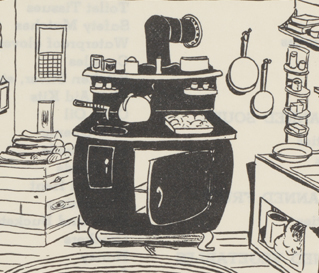 Air raid drills. Conelrad. Bomb shelters. Duck and cover. All of these were familiar terms to Americans in the Cold War culture of the 1950s. The future looked uncertain in the new Atomic Age, and there was growing tension between America and the Soviet Union. People lived with the threat of nuclear war as part of their daily lives.

President Harry Truman established the Federal Civil Defense Administration (FCDA) in 1950 after the outbreak of the Korean War. As part of the Alert America campaign, the FCDA flooded the public with some 400 million pieces of survival literature that attempted to educate and reassure people that simple civil defense procedures would protect them from a nuclear attack. People received maps showing evacuation routes, families were encouraged to build their own bomb shelters, and countless schoolchildren watched the movie “Duck and Cover” and practiced hiding under their desks when they “see the flash.”

After the Cold War, the government focus shifted away from defense against Soviet air strikes. The civil defense programs were replaced by the Federal Emergency Management Agency (FEMA), which was created in 1978 to oversee civil defense and disaster management. 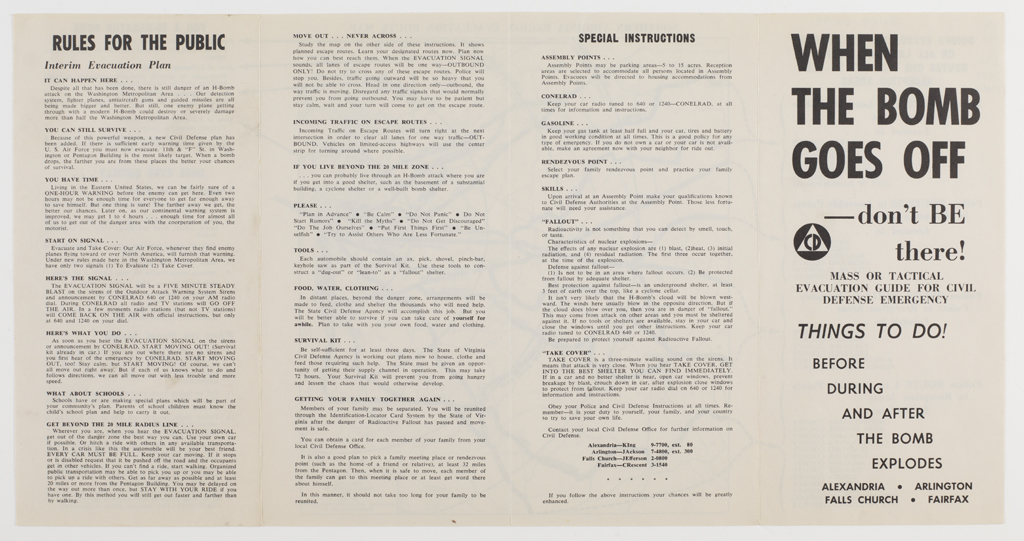 When the Bomb Goes Off — Don’t Be There!
Virginia’s military bases and its proximity to Washington made it a primary target. Northern Virginia had a special evacuation plan, but the population density and rural routes would have made a mass evacuation impossible. Brochures like this may have given people a sense of control and security. Plans for evacuating the government included a secret “relocation facility” with 800 beds to house congressional members. The bunker’s location was kept secret until 1992, when a reporter for the Washington Post Magazine revealed that it had been built under the Greenbrier resort in White Sulphur Springs, West Virginia. (VHS call number: UA926.5 E92 N874 1960z)
Image 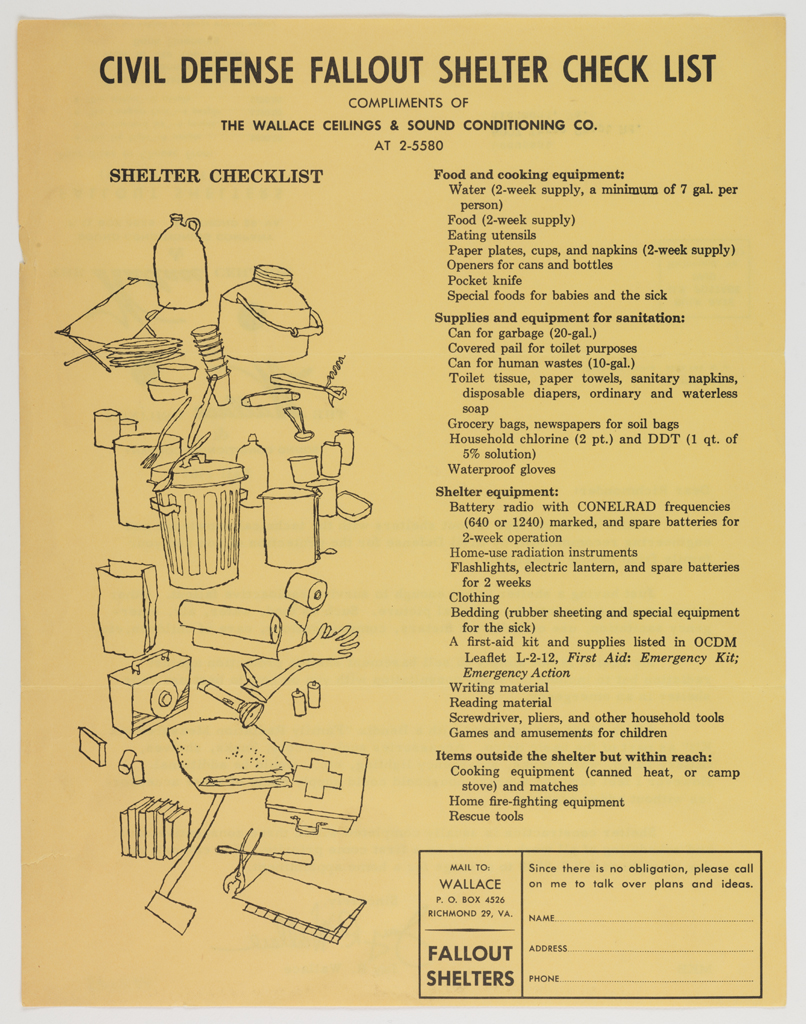 Civil Defense Fallout Shelter Check List
A number of businesses marketed various Cold War merchandise. The Wallace Ceilings & Sound Conditioning Co. in Richmond distributed this flyer listing the supplies needed for the well-equipped shelter. All of this equipment could be used today for disaster preparedness except for the DDT and the "home–use radiation instruments." (VHS accession number: 1992.105)
Image 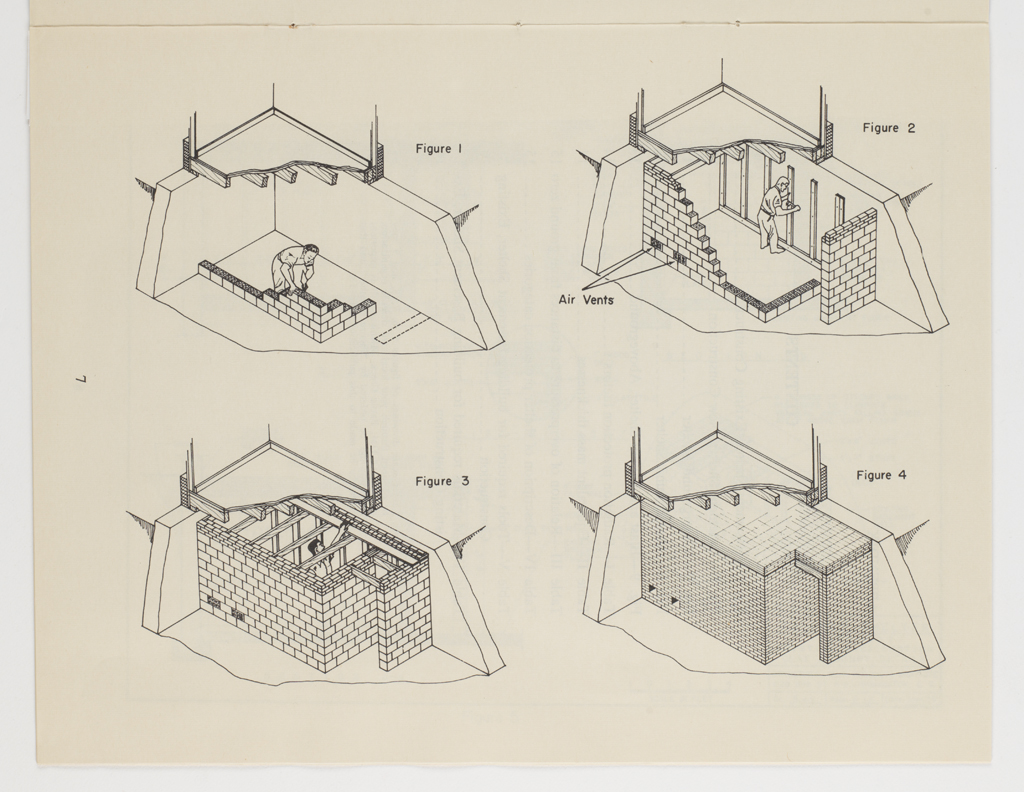 Clay Masonry Family Fallout Shelters (1977)
The family fallout shelter is an enduring symbol of the Cold War, but the practice of building a bomb shelter in the back yard was never widespread. Some estimates place the number of families with shelters at 1 percent of the population. The instructions shown here are for the construction of a basement shelter that could be built for $300 by a "do–it–yourselfer" with the help of a neighbor in two weekends. (VHS call number: TH1097 S927 1960)
Image 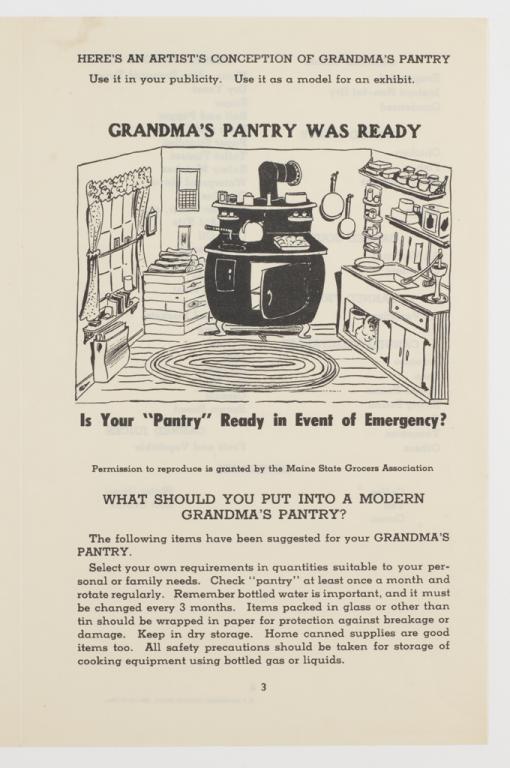