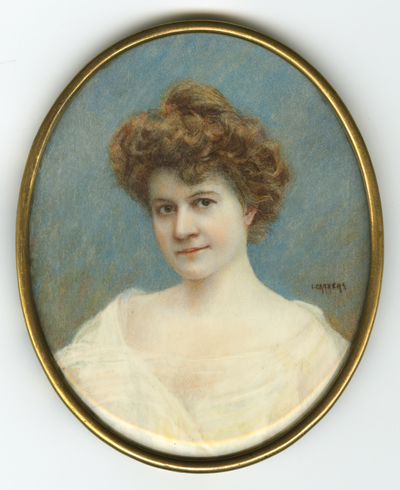 Valentine’s Day cards and the celebrations around the holiday began to escalate during the early twentieth century. Yet, there is one twentieth-century woman who did not receive a valentine from a man to whom she was secretly engaged from 1917 to 1918. Ellen Glasgow (1874-1945) was forty-three and an acclaimed Richmond novelist when she first met Henry Watkins Anderson on Easter Sunday 1916 after the death of her father. In her autobiography, The Woman Within, published after her death, Glasgow writes that “I was surprised by the attraction of opposites . . . for my part, I was warmed and thrilled by the man’s vitality” (p. 225).

Henry Watkins Anderson was a Richmond corporate attorney who became an ardent supporter of the Red Cross after the United States entered World War I. Given the rank of colonel by the Red Cross, he was appointed its commissioner to the Balkans. 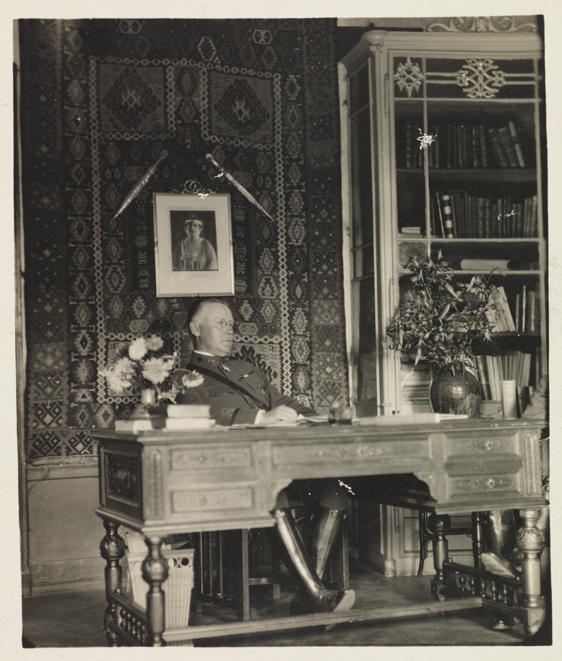 Henry Watkins Anderson in his Red Cross office in Romania, with a portrait of Queen Marie on the wall. (VMHC 2001.1.18)

In July 1917, Anderson set sail for the Balkans, and, as Glasgow notes, “we were never nearer in spirit than at that moment—for we were engaged to be married” (p. 230). Watkins wrote her every day on his voyage, but once he arrived in the Balkans, he “vanished into the silence of Rumania” (p. 231). Glasgow finally received a letter after several months, which announced his arrival and mentioned Queen Marie of Romania. After that, silence reigned again.

Queen Marie of Romania, granddaughter of Queen Victoria, married Crown Prince Ferdinand of Romania in 1893 and began a series of romantic affairs in 1897. She became involved with the Romanian Red Cross in 1916 and met Henry Watkins Anderson on his arrival there in 1917. 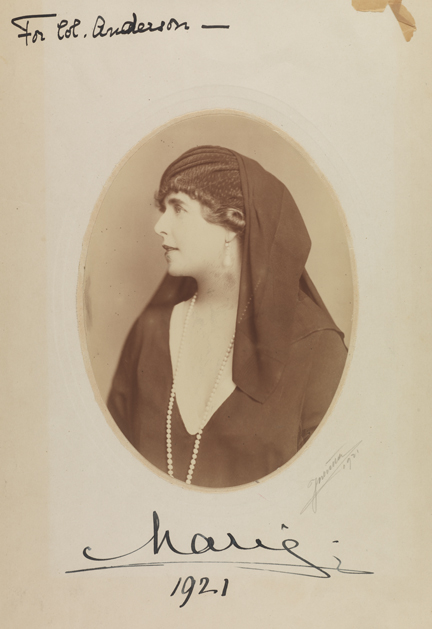 Queen Marie writes in her autobiography, Ordeal, that “Colonel Anderson, their chief, put himself entirely at my disposal . . . and I took [him] about to the hospitals” (p. 234). By the week of September 24, 1917, she notes that in their travels “Colonel Anderson quoted poetry and spoke to me of the stars” (p. 240). Anderson had made the transition from Glasgow to Queen Marie. They exchanged gifts, notes, and letters, and a love triangle was born.

One month after Valentine’s Day in 1918, the German army overran Romania, and Anderson eventually returned to the United States in June. Queen Marie writes of his departure: “I saw how his heart was wrung and how his soul revolted against this going away which was like an abandonment” (p. 320). 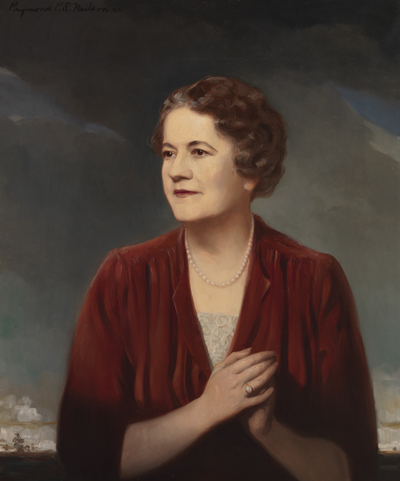 A painting of Glasgow based on a 1938 photograph published in her autobiography, The Woman Within, published after her death in 1954. (VMHC 1946.30)

Glasgow had a sad Valentine’s Day, having not heard from Anderson since the fall of 1917. Upon his return to Richmond, Anderson visited Glasgow in his Red Cross uniform and could do nothing but talk of Queen Marie. Several weeks later, Glasgow and Anderson quarreled, and she succumbed to depression and “did not care, for I had finished with the living” (p. 238). She tried to commit suicide with sleeping pills, “yet life would not release me” (p. 240).

In November 1918, Anderson returned to the Balkans and then to Richmond in October 1919 with “a half length portrait in oils, of Queen Marie, innumerable generously inscribed photographs in every imaginable costume and pose . . . and a forlorn and pathetic Russian wolfhound from the royal kennels” (pp. 242–43). Anderson and Queen Marie continued to exchange gifts, but it has been said that Glasgow received the greatest gift of all. Her devastating romantic relationship with Anderson gave her the creative spirit to produce her greatest literary works. 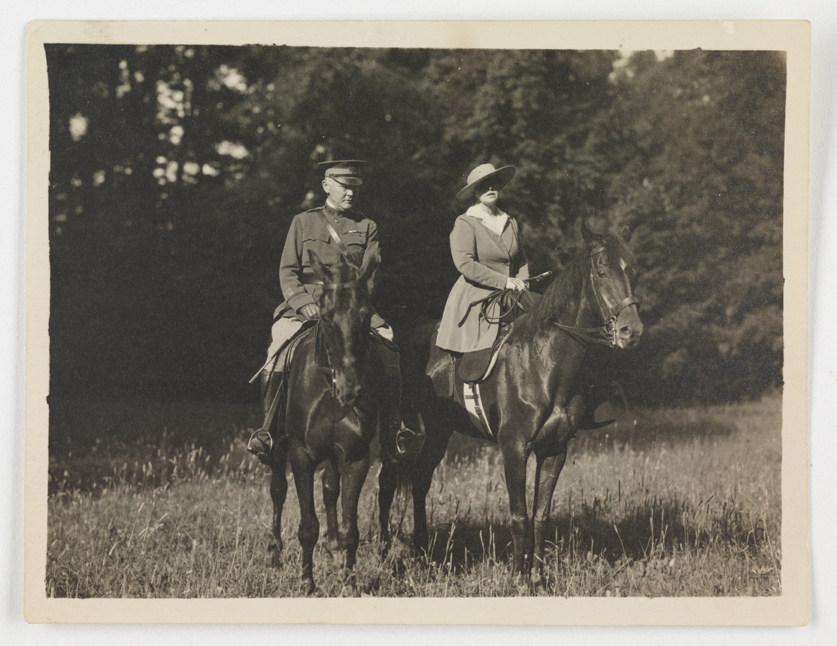 Anderson and Queen Marie on a hospital inspection tour in Romania. (VMHC 2015.1.1)

For the most complete information on this love story, come to the Virginia Museum of History & Culture and read the late Sara Bearss’s article entitled “Marie of Rumania and Henry Anderson of Virginia: A Faery Queen, A Virginia Knight Errant, A Pulitzer Novelist” (Virginia Country, April 1987 issue)

This article was written by Paulette Schwarting while serving as Director of Technical Services at the Virginia Museum of History & Culture.