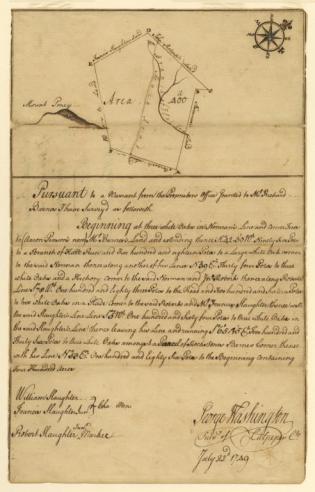 Did you know that George Washington began a career in 1749 as a land surveyor? Within a few years, he completed more than two hundred surveys. Washington’s surveying work spanned fifty years and enabled him to acquire vast tracts of land. At one point, he owned nearly 70,000 acres between the Potomac and Ohio Rivers. Speculation in western lands by Washington and other prominent Virginians led to territorial disputes between the British and French over settlement and control of the Ohio Valley.

In 1716, Lieutenant Governor Alexander Spotswood led an expedition of men whom he called the “Knights of the Golden Horseshoe” across the Blue Ridge Mountains into the Shenandoah Valley, claiming the land for Great Britain. Spotswood believed that settlement of the valley would secure the colony from both Indian attacks and incursions by the French, who had settlements and garrisons along the Ohio and Mississippi Rivers stretching from Canada to Louisiana. Proprietors of western lands also wanted to create a buffer between eastern plantations and runaway slaves whom they feared would form separate communities in the mountains. Colonial officials began issuing land grants to encourage migration to the Virginia backcountry. Most recipients were former German and Scots-Irish servants from Pennsylvania. As the population in the Shenandoah Valley grew, farmers continued to move farther southwest toward the New River Valley.

Gentry planters in eastern Virginia took an interest in western lands as well. A young George Washington began a career as a land surveyor in 1749 after accompanying a surveying trip to the western frontier. By 1752, Washington had completed nearly two hundred surveys. His success as a land speculator grew out of his early career as a surveyor.

Speculation of western lands was a common source of wealth for elites. The boundaries of Virginia as defined by the colonial charter extended beyond the Shenandoah Valley and north of the Ohio River. Planters in eastern Virginia formed the Ohio Company and were authorized by the Board of Trade in London to take control hundreds of thousands of acres in the Ohio Valley. In response, the French erected new forts to claim the same land as their own.