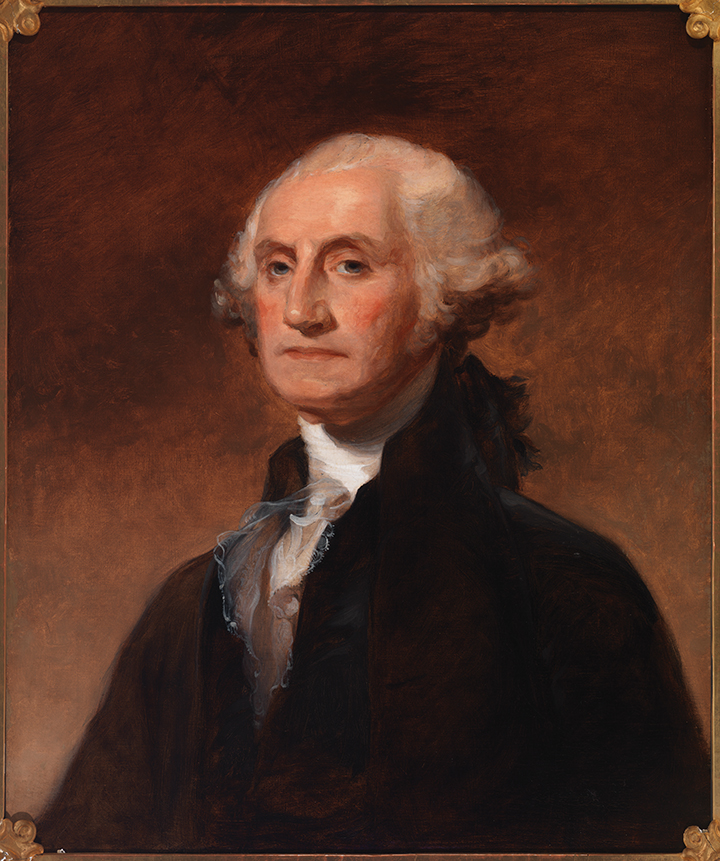 George Washington by Thomas Sully after Gilbert Stuart, 1856, copy of the 1796 original, oil on canvas. Gift of Jaquelin Plummer Taylor.

George Washington’s Farewell Address to the people of the United States appeared in newspapers across the nation; then was republished in booklet form. The address was never intended to be spoken; it was planned as a printed piece that would reach thousands of Americans. It appeared first on September 19, 1796, in Claypoole’s American Daily Advertiser of Philadelphia. The document is eloquent in its plea for the maintenance of the union and farsighted in its warnings against political strife and foreign entanglement. For those reasons it was read in the House of Delegates on Washington’s birthday from 1899 until 1984, and it continues to be read annually in the U.S. Senate. It is as relevant today as it ever was.

Four years earlier, in 1792 at the close of his first presidential term, Washington had longed to retire from public service, which had consumed so much of his time and energy for 17 years. But the outbreak in 1789 of the French Revolution brought instability to Europe, and political strife within the nation and within his cabinet. He felt compelled to remain in office. In 1794, he avoided war with England’s powerful navy by signing the Jay Treaty, to the displeasure of French supporters, notably his secretary of state, Thomas Jefferson. The internal strife was orchestrated by Jefferson and Washington’s treasury secretary, Alexander Hamilton. Jefferson and James Madison founded the Republican party to counter the Federalist party that was guided by Hamilton. Jefferson envisioned an agrarian society free from the evils of urban life, while Hamilton championed the North’s merchants and burgeoning industrialists. Jefferson wrote that he and Hamilton “were pitted in the cabinet like two cocks.” Vicious political battles between the two parties erupted during Washington’s second presidential term and were spread across the pages of partisan newspapers. Except during the Civil War years, the vindictiveness of the 1790s remained largely unmatched in American politics until, perhaps, today. 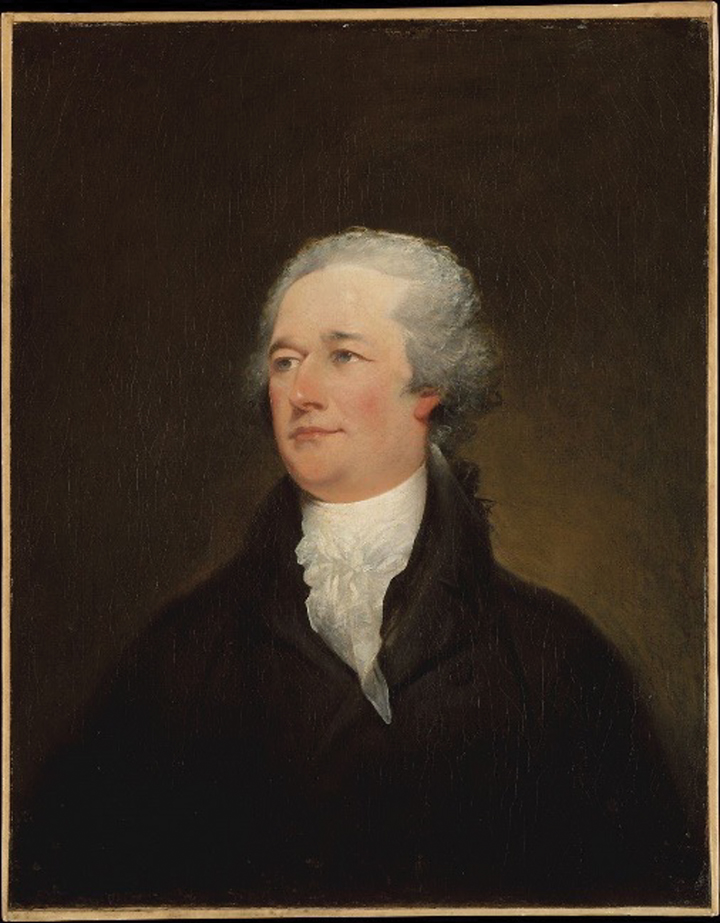 Alexander Hamilton by John Trumbull, 1804-06, oil on canvas. Located at the Metropolitan Museum of Art.

By the time of the presidential election of 1796, the international crises had subsided, and Jefferson had retired from the president’s cabinet. Washington reasoned that the nation was sufficiently stable for his countrymen to “not disapprove of my determination to retire.” He was more than ready to return to private life at Mount Vernon.

Washington was not bound by term limits to ever quit the presidency, and many Americans assumed that he would serve for life. His choice to forego a third term set an important precedent for future presidents. Equally significant was his decision to present to his countrymen a Farewell Address that would record his understanding of his achievements upon his leaving the presidency and his outlook for the new nation.

At the start of his first presidential term, Washington had routinely turned to James Madison for advice. In 1792, when he contemplated retirement, he had asked his fellow Virginian to draft a farewell address. By 1796, the president was routinely turning to Alexander Hamilton, whom he had come to recognize not only as a peer but also as a faithful supporter, in contrast to Madison who by then had aligned himself tightly with Jefferson. Washington sent Madison’s earlier speech to his treasury secretary, adding to it a section to address the “considerable changes” that had unfolded during his second term, particularly in foreign affairs and partisan politics. He invited Hamilton either to rewrite the old speech or discard it for a new document, one that would be timeless and elevated above political strife. Hamilton did both: he prepared a rewrite and a new speech. Washington preferred the latter. It was based on the themes that Washington had listed while it used Hamilton’s words. To edit the final document, the two passed it back and forth. 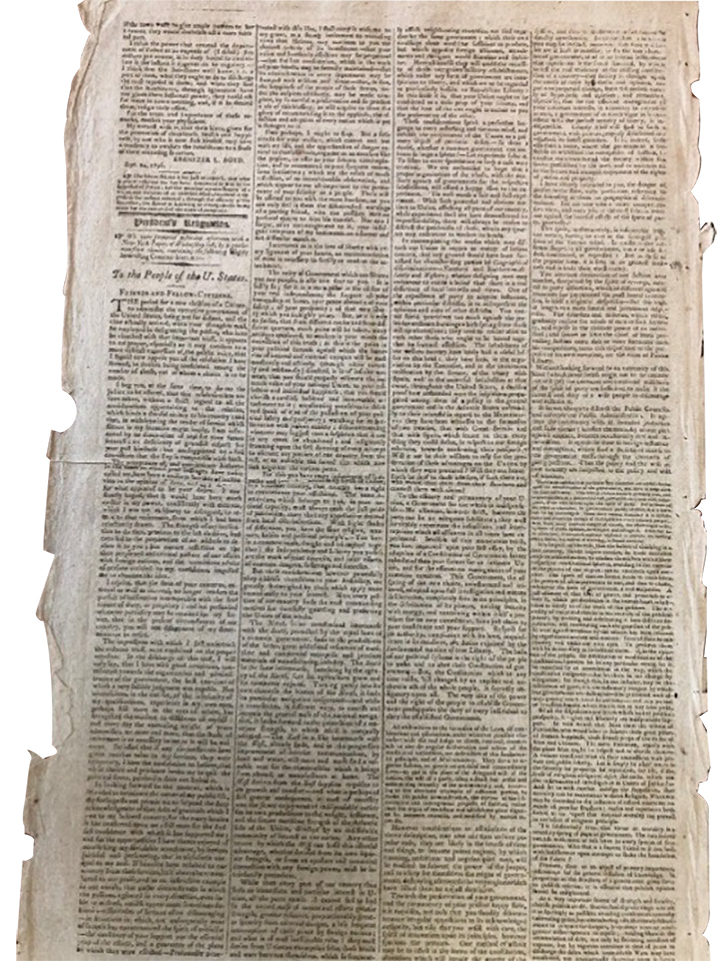 Farewell Address by George Washington, September 24, 1796. Printed in the Columbian Centinel in Boston.

Washington begins the address with an “acknowledgment of that debt of gratitude which I owe to my beloved country for the many honors it has conferred upon me; still more for the steadfast confidence with which it has supported me…. [T]he constancy of your support was the essential prop of the efforts.” He offers his wishes that the union be “perpetual” and that the Constitution be “maintained.”  After he had written, “Here, perhaps, I ought to stop,” the president continues his discourse at considerable length, out of a real fear that the American government might not, in fact, survive without his presence. In his forthcoming absence from public life, the words of the Farewell Address would have to stand in his place to bolster the nation and the Constitution.

The president begins his “warnings of a parting friend” by stressing the importance of the union that brought together the very different American states and regions. This is “a main pillar in the edifice of your real independence, the support of your tranquility at home, your peace abroad, of your safety, of your prosperity, of that very liberty which you so highly prize.” It will be attacked, Washington warns: “Much pains [sic] will be taken, many artifices employed, to weaken in your minds the conviction of this truth.”

The “permanency of your Union,” he continues, has been assured by your establishment of a “government for the whole,” one that is assured by the Constitution. With its “provision for its own amendment, [it] has a just claim to your confidence and support.” Americans, accordingly, must not undermine this system of government: “Respect for [the Constitution’s] authority, compliance with its laws, acquiescence in its measures, are duties enjoined by the fundamental maxims of true liberty.”

Anticipating the further increase in partisan bickering between the Republicans and Federalists that, in his opinion, jeopardized the development and even survival of the nation, Washington warned at length of “the dangers of [political] parties” and “the baneful effects of the spirit of party.” This was a masked attack on the Republicans. With remarkable foresight—which somehow anticipated the political turmoil that we know all too well today—Washington states:

"[T]he common and continual mischiefs of the spirit of party are sufficient to make it the interest and duty of a wise people to discourage and restrain it ... It agitates the community with ill-founded jealousies and false alarms, kindles the animosity of one part against another, foments occasionally riot and insurrection. It opens the door to foreign influence and corruption, which finds a facilitated access to the government itself through the channels of party passions.” 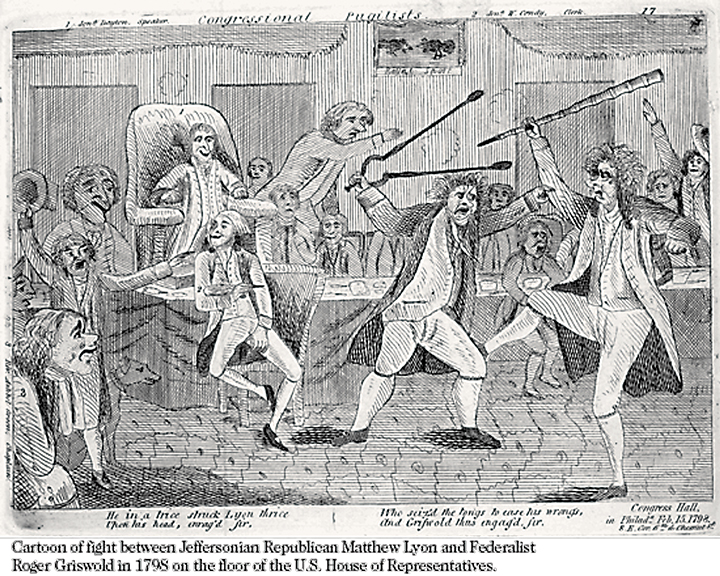 “Congressional Pugilists”, February 15, 1798. Cartoon of fight between Jeffersonian Republican Matthew Lyon and Federalist Roger Griswald 1798 on the floor of the U.S. House of Representatives. Located at the Library of Congress in the Prints and Photographs Division.

Washington next turned to religion and morality. He would not leave out of his address his strong belief in the importance of religion to the development and survival of the United States. Washington states:

“Of all the dispositions and habits which lead to political prosperity, religion and morality are indispensable supports. In vain would that man claim the tribute of patriotism, who should labor to subvert these great pillars of human happiness, these firmest props of the duties of men and citizens.... Whatever may be conceded to the influence of refined education on minds of peculiar structure, reason and experience both forbid us to expect that national morality can prevail in exclusion of religious principle. “

The centerpiece of Washington’s Farewell Address, and one of the messages that has most often been referenced is its call for neutrality in foreign affairs. The motivation for such emphasis (one fourth of the document is given to this theme) was Jefferson’s adoration of France. Washington and Hamilton were horrified by the anarchy and atheism of the French Revolution, and the president was angered by a recent attempt to influence American policy by a French envoy to the United States, Edmond-Charles Genêt. “Citizen Genêt” had been sent to promote American support for France’s wars with Spain and England. Following decades of experience in dealing with the French and with the British during the French and Indian and Revolutionary wars, and during his presidency, George Washington had developed an uncanny ability to foresee entanglements.

The president’s advice regarding foreign affairs has for centuries been deemed relevant by American statesmen:
"Observe good faith and justice tow[ar]ds. all Nations; cultivate peace and harmony with all....  in the execution of such a plan, nothing is more essential than that permanent, inveterate antipathies against particular nations, and passionate attachments for others, should be excluded; and that, in place of them, just and amicable feelings towards all should be cultivated.... [F]oreign influence is one of the most baneful foes of republican government…. The great rule of conduct for us in regard to foreign nations is in extending our commercial relations, to have with them as little political connection as possible.”

To be free of the “frequent controversies” that plague Europe, Americans should “steer clear of permanent Alliances, with any portion of the foreign world.” Washington mentions his Neutrality Proclamation of 1793 that he issued when France declared war on England: “[I] had a right to take… and was bound in duty and interest to take, a neutral position.”

George Washington volunteered the advice given in the Farewell Address for the same reason that he had led the Continental Army and had reluctantly come back from retirement to serve as the nation’s first president. The lifestyle that he longed to enjoy at Mount Vernon was impossible without the protection of a stable, benevolent government, and he was probably the only general in the colonies who could have led the American army to victory, and afterward he was the only figure who was trusted throughout the nation to be its first president. As Washington explains in the closing statement of the address, his final words to the American public, the point of government is to allow a private citizen to savor domestic bliss:

"I anticipate with pleasing expectation that retreat, in which I promise myself to realize, without alloy, the sweet enjoyment of partaking, in the midst of my fellow-citizens, the benign influence of good laws under a free government, the ever-favorite object of my heart, and the happy reward, as I trust, of our mutual cares, labors and dangers."