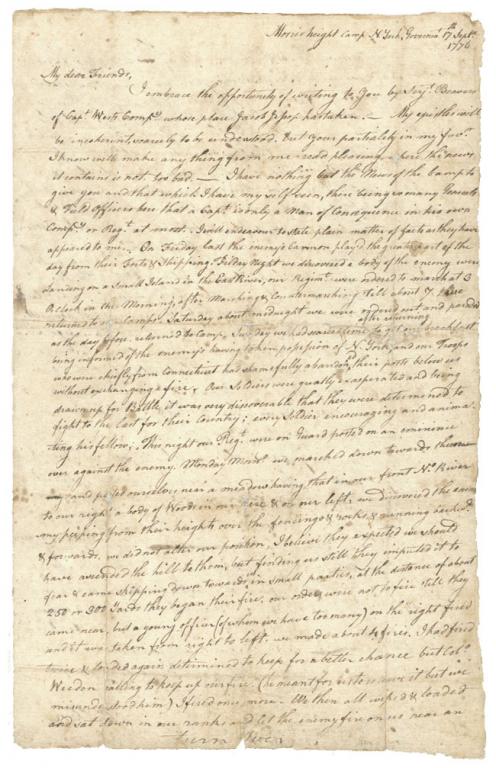 I embrace the opportunity of writing to you by Sergt. Beaver[?] of Capt. Wests Comp[an]y whose place Jacob Jessop has taken.

My epistles will be incoherent, scarcely to be understood, but your partiality in my fav[o]r I know will make any thing from me read pleasing, where the news it contains is not too bad.

I have nothing but the news of the camp to give you and that which I have myself seen, there being so many Generals & Field Officers here that a Capt. is only a man of consequence in his own Comp[an]y or Reg[imen]t at most. I will endeavour to state plain matter of facts as they have appeared to me. On Friday last the enemy's cannon played the greatest part of the day from their Forts & Shipping. Friday night we discovered a body of the enemy were landing on a small island in the East River, our Regim[en]t were ordered to march at 3 o'clock in the morning, after marching & countermarching 'till about 7 we returned to our camps. Saturday about midnight we were ordered out and paraded as the day before returned to camp. Tuesday we had scarce time to get our breakfast being informed of the enemy's having taken possession of N[ew] York, and our troops who were chiefly from Connecticut had shamefully abandoned their posts below us without exchanging a fire. Our soldiers were greatly exasperated and being drawn up for Battle it was discoverable that they were determined to fight to the last for their Country; every soldier encouraging and animating his fellow. This night our Reg[imen]t were on Guard posted on an eminince over against the enemy. Monday morn[in]g we marched down towards them and posted ourselves near a meadow having that in our front No. River to our right a body of woods in our rear & on our left we discovered the enemy peeping from their heights over fencings & rocks & running back[war]ds & forwards. We did not alter our position. I believe they expected we should have ascended the hill to them, but finding us still they imputed it to fear & came skipping down towards us in small parties, at the distance of about 250 or 300 yards they began their fire. Our orders were not to fire 'till they came near, but a young officer (of whom we have too many) on the right fired and it was taken from right to left. We made about 4 fires. I had fired twice & loaded again determined to keep for a better chance but Colo[nel] Weedon calling to keep up our fire (he meant for us to renew it but we misunderstood him) I fired once more. We then all wiped & loaded and sat down in our ranks and let the enemy fire on us near an