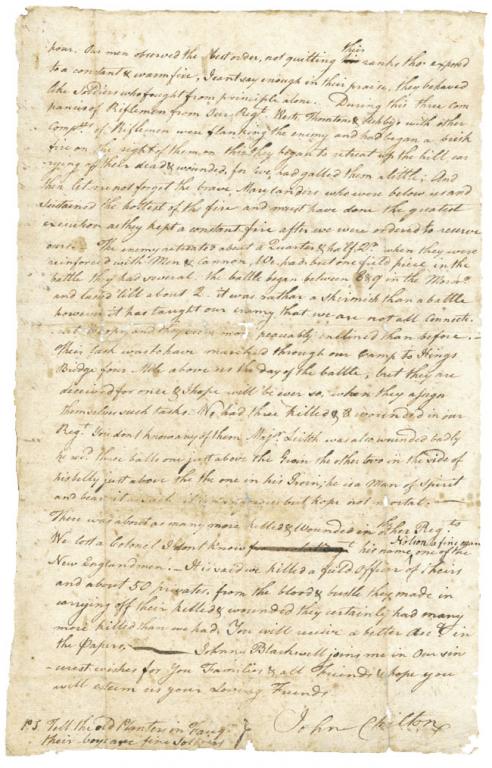 hour. Our men observed the best order, not quitting their ranks tho' exposed to a constant & warm fire. I can't say enough in their praise, they behaved like soldiers who fought from principle alone.

During this three companies of Riflemen from our Reg[imen]t, West's, Thornton's & Ashby's with other Comp[anie]s of Riflemen were flanking the enemy and had began a brisk fire on the right of them on this they began to retreat up the hill carrying off their dead & wounded, for we had galled them a little; and then let me not forget the brave Marylanders who were below us and sustained the hottest of the fire and must have done the greatest execution as they kept a constant fire after we were ordered to reserve ours.

The enemy retreated about a Quarter & half [?] when they were reinforced with men & cannon. We had but one field piece in the battle they had several. The battle began between 8 & 9 in the morn[in]g and lasted 'till about 2. It was rather a skirmish than a battle however it has taught our enemy that we are not all Connecticut Troops and they were more peaceably inclined than before. Their task was to have marched through our camp to Kings Bridge four Miles above us the day of the battle, but they are deceived for once & I hope will be ever so, when they assign themselves such tasks. We had three killed & 8 wounded in our Reg[imen]t. You don't know any of them. Maj[o]r Leitch was also wounded badly he rec[eive]d three balls one just above the groin the other two in the side of his belly just above the one in his groin; he is a man of spirit and bears it as such. It is dangerous but hope not mortal.

There was about as many more killed & wounded in the other Reg[imen]ts. We lost a Colonel I don't know his name Holson a fine man one the New England men. It is said we killed a field officer of theirs and about 50 privates from the blood & bustle they made in carrying off their killed & wounded. They certaintly had many more killed than we had. You will receive a better de[s]c[ription] in the papers.

John Blackwell joins me in our sincerest wishes for you Families & all Friends & hope you will esteem us your Loving Friends.

P. S. Tell the old Planters in Fauq[uie]r their boys are fine solders. [end of page 2]