In the colonial period, portraiture proved to be a particularly useful tool in establishing and preserving family status. This exhibit presents nineteen portraits from the Virginia Historical Society's collection. Represented are the Randolph, Byrd, Fitzhugh, Wormeley, and Gordon families. Early Virginia portraits reveal much about the families that commissioned them, as well as how these Virginians valued how they were perceived by others. 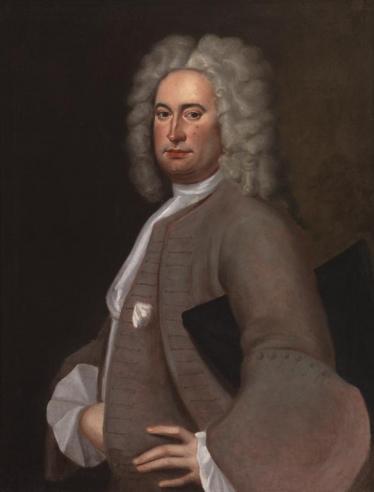 Vulnerable to economic instability and competition that could disrupt their hard-won financial and social status, even the most accomplished settlers on the frontier that was colonial Virginia felt less than secure. They looked for ways to entrench their standing and thereby preserve it. One was to structure society around the family dynasty. Another was to commission portraits. Portraiture was pursued in the colony with enthusiasm.

Rarely were portraits in colonial Virginia isolated commissions. Instead, they were conceived and displayed as family groups that extended, wherever possible, across more than one generation. Images of ancestors were reverently retained because they served to provide historical legitimization of family status. Portraits of heirs served to project family status into the future. Portraiture furthermore provided a means by which the children of dynasties could be instructed, not only in family accomplishment and expectations but also in the dress, deportment, and behavior of genteel adults.

A Philadelphia visitor to Isham Randolph (displayed here) was warned by a mutual London friend to go "handsomely dressed" to Virginia because people there looked "more at a man's outside than his inside." William Fitzhugh wrote on several occasions of the necessity to present a "creditable" appearance in order to live "comfortably" in Virginia. Portraiture conveyed "creditability." So did a great plantation house, a family library, a collection of furniture, or silver engraved with the family crest. The assortment of objects exhibited here amongst the portraits alludes to that point.

The Randolph and Fitzhugh dynasties were among the most visible during the colonial era; eventually those families became renowned up and down the eastern seaboard. Many other early Virginia dynasties are also represented by the portraits and objects displayed in this exhibition. 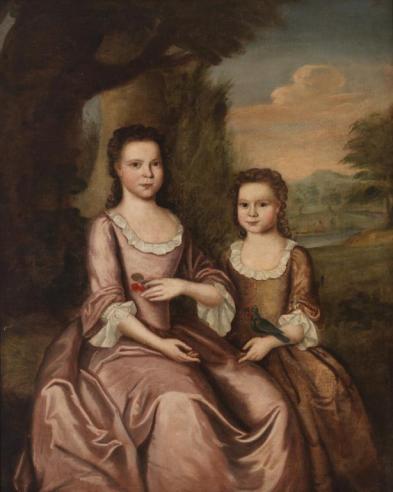 Large groups of family portraits were a phenomenon peculiar to colonial Virginia. Displayed here are multiple portraits of members of the Randolph, Fitzhugh, Byrd, Wormeley, and Gordon families. These are names familiar to historians and genealogists, who over the past three hundred years have developed a sizable body of literature about the "first families of Virginia." Scholars have described the FFVs as a dominant force in the development and identity of society in the colony and in the civilizing of America. These extended families wielded economic and political power. They filled a social and cultural vacuum formed by the scarcity and weakness of institutions in the Virginia colony and the absence of a major urban center—a result of settlement on plantations. Their portraits reveal much about an ideal of the extended family distinct to Virginia.

The FFV portraits also show an ideal of the nuclear family. The unit was copied from English society and was rendered on canvas after the prevailing conventions of English painting. Contemporary English values of genteel behavior and order controlled by strong authority were readily accepted by the Virginia gentry as means to form havens of peace and harmony. Their plantations removed them from the disorder and discord that characterized the lifestyle of the lowest segments of early Virginia society. In portraiture, the planter is aptly shown as an imperious patriarch and center of authority. His wife is portrayed as a model of virtue and restraint. Though in fact his subordinate in all decisions from culture to politics, she is his equal on canvas, because portraits are images of family, and women of course are vital to family perpetuation. The conventions used by artists for adult males and females in Virginia are the same used in other American colonies. A difference lies in the quantity and nature of the images of Virginia children. Starting at tender ages, children in Virginia were made to assume the genteel behavior of refined adults. 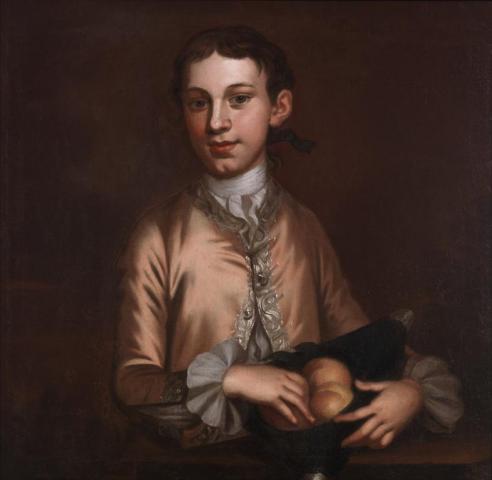 Gentry parents in colonial Virginia readily assumed an obligation to educate their heirs and provide generous inheritances for them. If they did not, their children could sink into the mire of low society. As a consequence, family status could be lost; efforts to achieve gentility on a frontier would have been in vain. Given the difficulty of teaching refined behavior in a wilderness, instruction began early. Portraiture was a helpful device, providing models of adult decorum to be copied and, in the case of children’s paintings, informing sitters—by their own examples on canvas—of levels of gentility already achieved.

Conceptions regarding childhood were in transition in the eighteenth century both in England and the Virginia colony, where the free environment of the plantation further altered even the newest ideas. The seventeenth-century European perception of children as dangerous, evil animals (a viewpoint perpetuated in Puritan New England) had given way to a new appreciation of childhood as an enjoyable and important stage of development. In Virginia, the uncrowded plantation setting allowed a particularly permissive, optimistic approach to child rearing. That philosophy only hastened the change in Virginia after mid-century from an ideal of the family as patriarchal to an ideal of the family as an intimate and affectionate unit, one in which children were the emotional focus.