The History of Virginia's Natural Bridge: "So Beautiful an Arch" 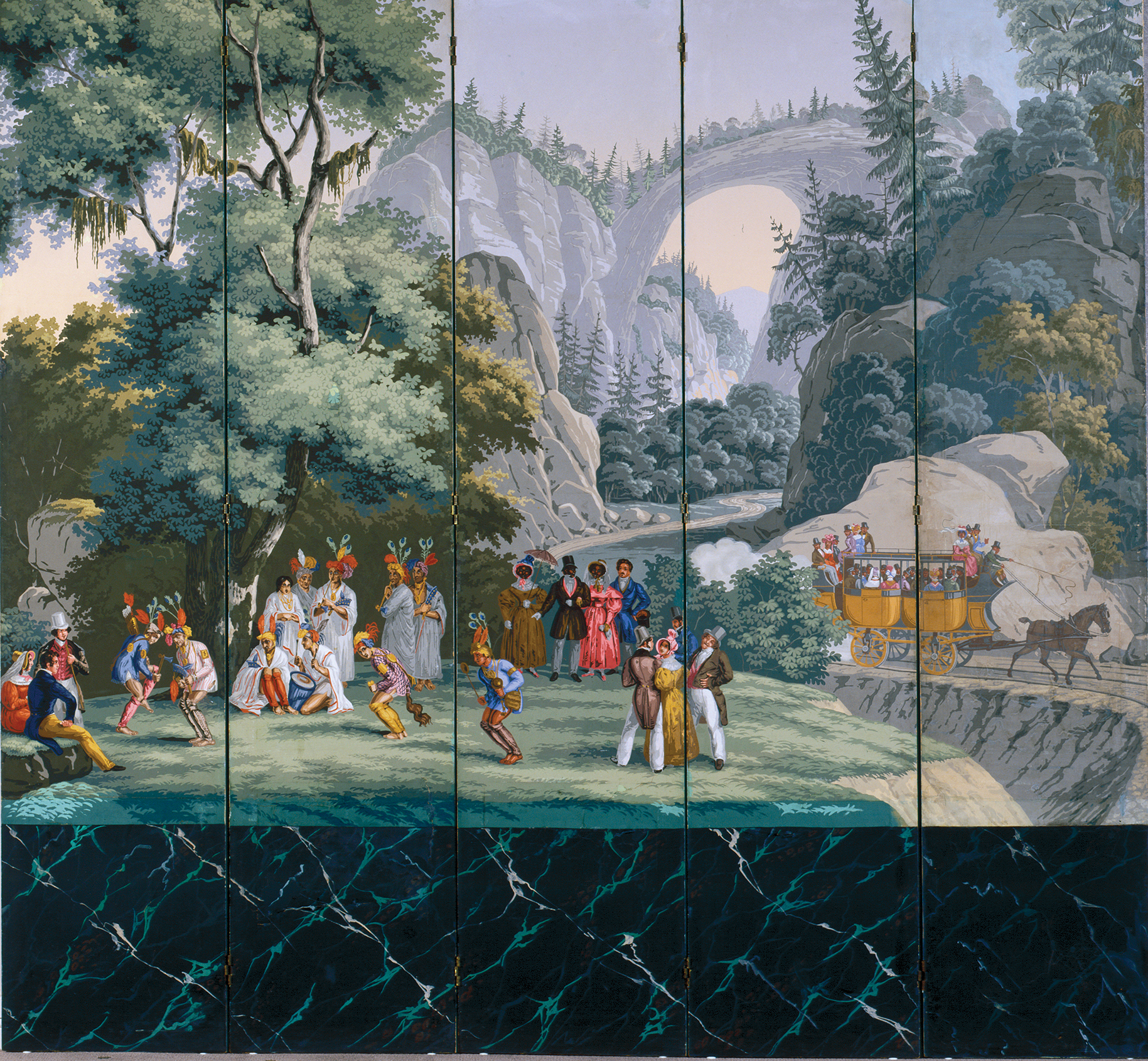 In the late eighteenth century, when Thomas Jefferson “discovered” Natural Bridge and purchased it from the King of England in 1774, a revolutionary change was taking place in man’s approach to the arts. This change affected how people throughout the nineteenth century would view nature. This shift in sensibilities explains the intriguing history of how Natural Bridge has been viewed, how it became an icon of American culture, and why it was appreciated in the nineteenth century more than it is today.

The philosophy initiated by the Greeks and Romans, and followed throughout the Renaissance, was the viewpoint that beauty can be defined in terms of qualities inherent in the object. A building, for example, was beautiful if it conformed to fixed rules, like those about symmetry, proportion, and the relationship of the parts to the whole. In the late eighteenth century, the tables were turned in that interest shifted from the object to the emotional response of the viewer. The term “romantic,” which is often used to describe the period that followed, means in this context an appeal to the emotions. Man yearned to acknowledge the presence of natural forces that he cannot control.

Carbon Print of the Natural Bridge by Michael Miley, about 1880–90.

Of the published explanations that explored these new ideas about the arts, the most influential was Edmund Burke’s Philosophical Enquiry into the Origins of Our Ideas of the Sublime and the Beautiful (1757). Burke’s philosophies about the landscape guided connoisseurs and artists in Europe and America for more than a century. The British statesman-to-be described the Sublime as the pleasure that results from knowing of perils that pose no immediate threat to the viewer: “The passions… are delightful when we have an idea of pain and danger without being actually in such circumstances.... Whatever excites this delight I call sublime.” Burke’s playbook on how to approach powerful, seemingly incomprehensible elements of nature—such as a tidal wave, an avalanche, a wild cataract, a great mountain, or stillness, darkness, or death—was followed by innumerable visitors to Natural Bridge, one of two American landmarks that at the time were almost universally accepted as truly sublime, (The other was Niagara Falls.) Visitors repeatedly used the word sublime to describe the bridge, and they recorded their emotional reactions to it.

Thomas Jefferson, having read Edmund Burke, famously boasted in his Notes on the State of Virginia (1785) that Natural Bridge is unequaled in its sublimity. His publication was a response to a French request for information about the state, and he reasoned, no doubt correctly, that Virginia would receive the acclaim that was due to Natural Bridge only if he described it using terminology that would be understandable to the readers of Burke:

"Few men have resolution to . . . look over into the abyss. You involuntarily fall on your hands and feet, creep to the parapet, and peep over it. Looking down from this height about a minute gave me a violent head ach[e]. If the view from the top is painful and intolerable, that from below is delightful in an equal extreme. It is impossible for the emotions, arising from the sublime, to be felt beyond what they are here: so beautiful an arch, so elevated, so light, and springing, as it were up to heaven, the rapture of the spectator is indescribable."

This brief account was remarkably successful in establishing renown for the bridge, which it accomplished by luring others to the site who in turn wrote about it and sketched it, mimicking Jefferson’s ideas about sublimity. 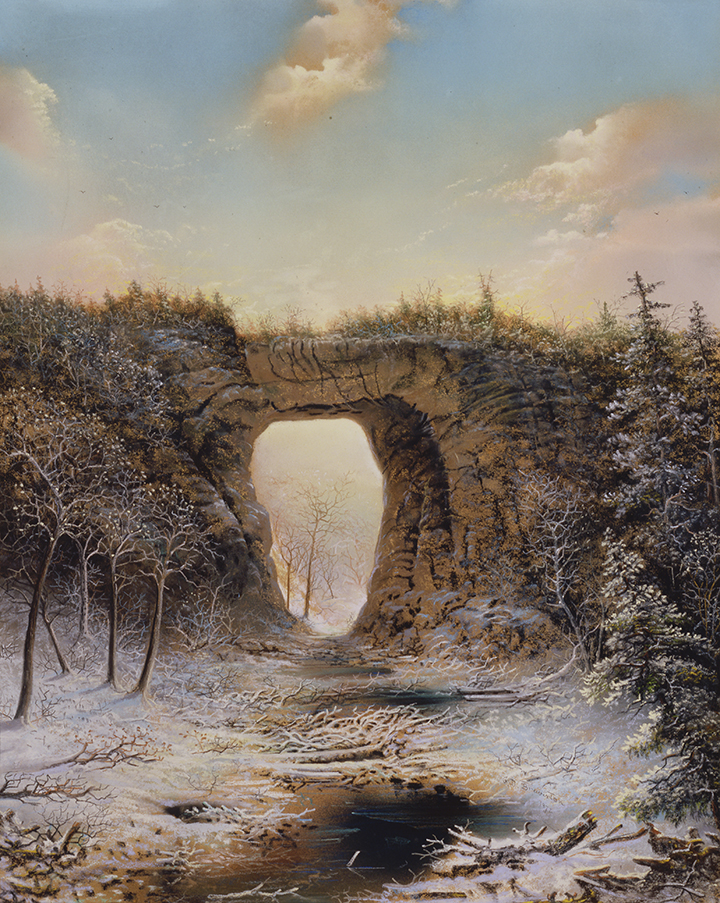 In 1808, William Roberts, a now obscure English painter, created a remarkable image of the bridge that exaggerated its sublimity in a way that conforms to Jefferson’s account, and he gave his canvas to the president, who provided his “approbation of my design to have [it] engraved.” Since the Roberts canvas is now lost, it fortunately was in fact engraved, multiple times. One of the engravings was the source for the backdrop of a spectacular French wallpaper scene by Jean-Julien Deltil that famously is preserved in the White House. It also is in the VMHC collection.

The best known of prints that copied the Roberts canvas, and probably the source for the French wallpaper, is by the French scientist and artist Jacques Gérard Milbert, who in an account of his travels wrote about the bridge in the manner that Jefferson did:

"To appreciate its true grandeur one must contemplate its gigantic proportions and savage majesty, the crown of superb trees on the summit, the curious accidents of the fracture, the green curtain stretching at the base.... The traveler is suddenly terrified to find himself on the edge of an apparently bottomless abyss."

Milbert added one additional thought that is sublime, that the bridge will someday fall. In this way he came close to the modern explanation that Natural Bridge was formed when most of a limestone cavern collapsed.

The Lexington photographer Michael Miley was apparently aware of the Roberts-Milbert image because in one of his many views of Natural Bridge he deliberately set out to duplicate the same type of exaggeration. With light and shade, he is able to suggest that the bridge tilts. He further manipulated his image by working the glass plate to give better visual evidence that the rock sides of the bridge have been shaved away with the passage of time.

One of the most insightful interpretations of the sublimity of Natural Bridge was offered in 1816 by the accomplished author James Kirke Paulding, who understood Edmund Burke’s emphasis on emotions instead of the objects that kindle them. “My knees shook under me when looking down", he wrote, "and from below I was struck with a feeling of sublimity which no object I have ever seen had hitherto inspired.” Echoing the English aesthetes of the eighteenth century, Paulding stressed that “we cannot measure the extent of our feeling of the sublime, by calculating the dimensions of any object; it is the effect, and not the cause, that furnishes the criterion of sublimity.” 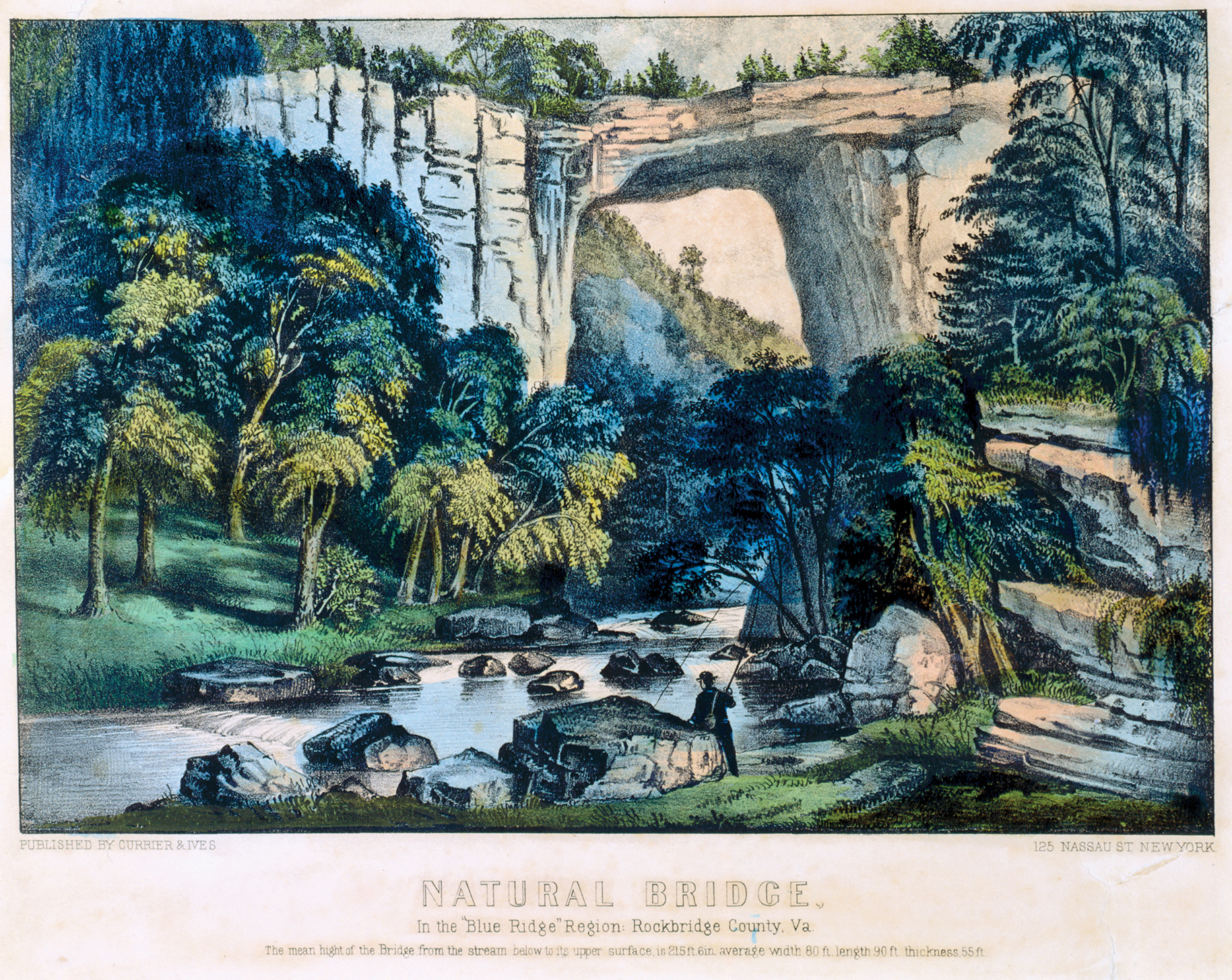 Hand-colored Lithograph of Natural Bridge by Currier and Ives, about 1860.

Like Burke, Paulding was acknowledging the presence of natural forces that he can neither control, understand, or even replicate. Most who visited the bridge, at least in the early nineteenth century, reacted to its sublimity. In 1842, the minister Archibald Alexander wrote, “Although I have conversed with many thousands who had seen the Natural Bridge; and although the liveliness of the emotion is very different in different persons; yet I never saw one, of any class, who did not view the object with considerable emotion.” He described his own response as “sudden” and “entirely new” to him; it was the “animal sensation which accompanied the genuine emotion of the sublime.”

One sensation experienced at Natural Bridge that was not noted by either Paulding or Alexander, but was recorded by others, was that of “peace and calm.” This was written in 1886 by a traveler self-identified only as E.L.B.: “It is one of those spots of earth that seem made for rest.” This agrees with Jefferson’s mention of distant views at Natural Bridge that are “delightful in an equal extreme.”

The visitor to Natural Bridge did not necessarily limit his thoughts to Edmund Burke’s Sublime, with its emphasis on peril and delight; the grandeur of the bridge might also inspire consideration of the Divinity. The calmness of the surrounding landscape encouraged such an idea. In 1851, Mary Jane Boggs wrote that initially she “did not think [the bridge] could be so sublime.” But she changed her opinion once she was there, to believe that “no one could view that splendid arch without a feeling of awe and a thought of the wisdom of its Creator.”

European, as well as American artists—even if they never visited Natural Bridge—were eager to depict it on account of its fame. They presented it simply as a remarkable American landmark. By mid-century it was so well known that it appeared as a metaphor in one of the greatest of American novels, Moby Dick. Describing the great white whale, Herman Melville wrote in 1851:

"But soon the fore part of him slowly rose from the water; for an instant his whole marbleized body formed a high arch, like Virginia’s Natural Bridge, and warningly waving his bannered flukes in the air, the grand god revealed himself, sounded, and went out of sight."

A decade later, the bridge was sufficiently appreciated to be the subject of a popular Currier and Ives hand-colored lithograph.

For at least a few years after the Civil War, visitation to Natural Bridge by non-Virginians plummeted. “There was a time when the Natural Bridge was esteemed among the greatest wonders of the continent,” lamented the editor of The Virginia Tourist in 1870. “Of late it has languished in obscurity and neglect,” he continued, “visited only by stray travelers from the Virginia springs.” However, the recognition of Natural Bridge in that same decade in both Picturesque America and The Great South would produce a brief upsurge of tourism as well as a new burst of artistic creativity.

When the Virginia artist Flavius Fisher painted Natural Bridge in 1882, it had become more accessible than ever to tourists, due to the building of railroads into the Shenandoah Valley. The artist pictures more than a dozen visitors at the base of the arch. To them the bridge was a spectacular but not mysterious site, for it had become accepted that this wonder was created by slow erosion rather than some unfathomable cataclysmic event.

By 1882, the second summer of heightened awareness of Natural Bridge was nearing its end. The establishment of Yellowstone National Park, and the production of huge panoramic paintings of the Grand Canyon had given a new dimension to the term “wonder of nature”, and by this standard Natural Bridge did not seem to measure up. After 1900 it descended permanently into a secondary role among the works of nature. Nonetheless, precisely because it had “sounded” so loudly in the nineteenth century, Natural Bridge never did fall “out of sight.” The stereo card and postcard industries had only begun, and they would carry the fame of the bridge throughout the twentieth century. In 2016, the inclusion of Natural Bridge within the Virginia network of state parks, due to its historical importance, elevated its status and assured its preservation and a continuation of its fame.

Learn More
The VMHC collection contains more than 100 paintings, aquatints, engravings, lithographs, drawings, and photographs of Natural Bridge, plus an additional hundred stereo card and postcard images. Images of Natural Bridge in the VMHC collection not currently on display can be viewed online in the museum’s digital records system at VirginiaHistory.org/NaturalBridge.