The Honor of Membership 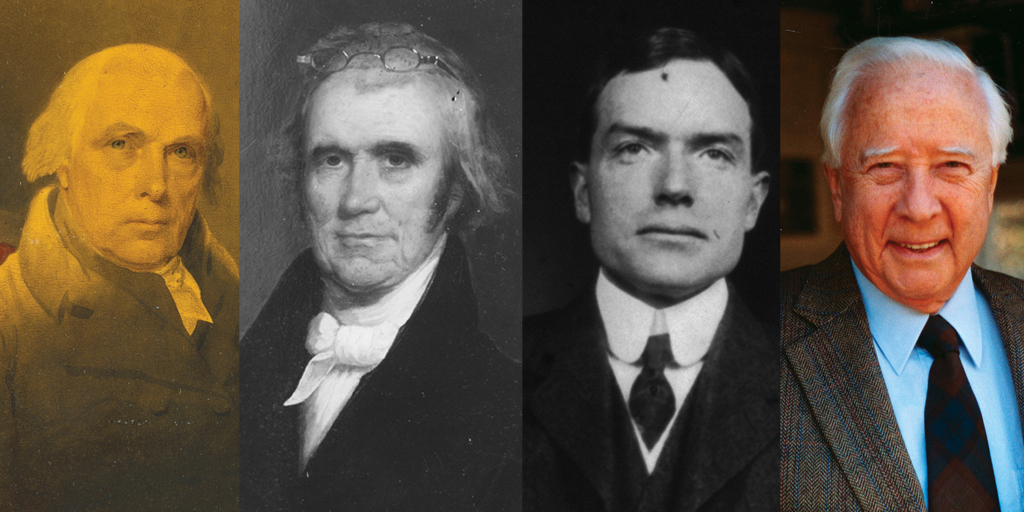 Quick. What did John C. Calhoun, Washington Irving, John D. Rockefeller, Jr., and George C. Marshall have in common? If you guessed that all were honorary members of the Virginia Historical Society, you would be correct.

Beginning with the first organizational meeting in 1831, the governing body of the VHS has periodically elected honorary members. At the 2006 J. Harvie Wilkinson, Jr., Lecture, VHS president and CEO Charles F. Bryan, Jr., announced that the night's speaker, David McCullough, was the latest to be thus selected. This marked the first time since 2000 that the board of trustees had named an honorary member and recognized McCullough's contributions both as a scholar and a friend of the society.

Although all three current honorary members—McCullough, Thad W. Tate, and Louis L. Tucker—are scholars, that has not always been the case. Over the years the group has also included statesmen, military leaders, and prominent donors to the society. Similarly, today's relatively infrequent election of honorary members is also a recent development. In the early days of the historical society, it was not uncommon for numerous people to be selected each year. In 1847 Sen. Henry Clay was one of eleven so named; in 1870, Gen. Robert E. Lee shared the distinction with fourteen other men. All told, the society has elected close to 200 honorary members in its 175-year history.

The first class of honorary members was an interesting one. On December 29, 1831, the twenty-eight men who met in the house chamber of the state capitol selected John Marshall as the first honorary member but almost immediately chose an even larger role for the chief justice to play, naming him the society's first president. At the same meeting, those assembled picked four others, including former president James Madison, to be honorary members, thus conveying legitimacy on the fledgling institution and establishing its living link to the state's glorious Revolutionary past.

The founders of the Virginia Historical Society believed that they lived in a time of crisis, seeing their state losing population and influence to the quickly expanding West and the rapidly industrializing North. The establishment of the society was an effort to preserve the rich legacy of Virginia's founding fathers and to remind one and all of the Old Dominion's central place in American history. Somehow it seemed right and proper that David McCullough, one of the foremost chroniclers of the nation's founders, and the man who reminded us that "history is an aid to navigation in perilous times," had become the latest inheritor of that legacy as an honorary member.