From Horse-Driven to Gas-Fueled Transportation 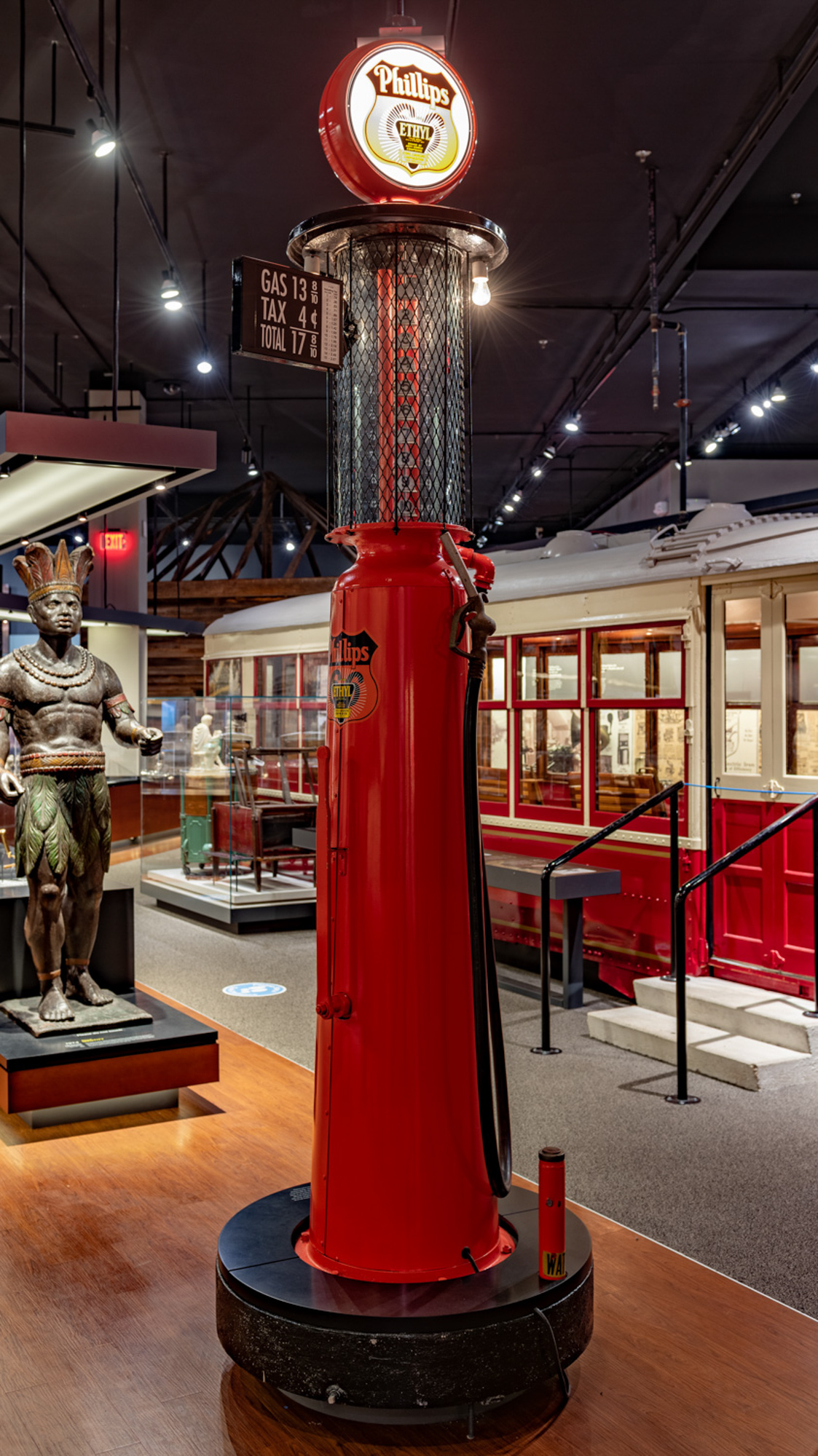 This gravity-flow pump (c. 1927), used near Petersburg, Virginia, is evidence of the state’s transition from horse-driven to gas-fueled transportation. It is a powerful artifact that prompts consideration of the momentous changes that accompanied the beginning of the modern era. Those changes are particularly visible in Virginia’s economic history and in its land preservation movement.

Even today this pump appears modern: its form follows its function. It is called a “visible gas” pump because its clear glass cylinder allowed the customer to see if dirt was in the gas being purchased (a problem at the time). It held 5 to 10 gallons. By moving its manual pump back and forth, the customer would pull the gas out of an underground tank and into the cylinder, from which it could flow by gravity down a hose and into a car’s gas tank.

The economic impact in Virginia of gas-fueled transportation originated in the same decade that this pump was made. The mass-produced Model T Ford, introduced in 1908, was so affordable and popular that by the 1920s paved roads had become essential in the state. Rather than sell bonds to finance some 3,500 miles of new roads, and thereby plunge Virginia into debt, state senator Harry F. Byrd insisted on a “pay-as-you-go” approach–a three-cent-a-gallon tax on gasoline to shift the cost to the people who used the roads. Byrd’s fiscal conservatism resonated in Virginia, and it survives today.

Along the new highways a proliferation of businesses and billboards emerged to threaten the landscape. This pump was used near the old Richmond-Petersburg Pike (a part of U.S. 1), completed in the 1920s. (Interstate 95 was constructed parallel to it in 1958.) In a Works Projects Administration guide of 1940, the Pike was described as “lined with tourist cabins, garages, and lunchrooms swathed in neon lights that at night convert the road as far as Petersburg into a glittering midway." In the opinion of VMHC curator William Rasmussen, the Pike had become a notoriously ugly road. One of the first projects of the Garden Club of Virginia was the redemption of the highway landscapes. Club members pushed for legislation and resorted to all-out warfare. A Richmond Times-Dispatch headline proclaimed, “Women Declare War on Billboards” and reported that their chauffeurs and yard men, with axes, physically removed 4,000 signs from roadsides! You can follow this remarkable story in the past VMHC exhibition, A Landscape Saved: The Garden Club of Virginia at 100, which examines the movement to beautify Virginia’s landscapes.

The original version of this article was published in the Richmond Times-Dispatch’s Discover Magazine as “Artifact Spotlight: gas pump” on August 8, 2020. View original article.