Time Period
1925 to Today
Topics
Art & Architecture
Decorative Arts
Domestic Life
The plan of Virginia House was based on the Weddells' wish that someday their home would be the headquarters of the Virginia Historical Society. The large library on the second floor and the archival storage in the basement were constructed with this idea in mind. The gallery was originally intended for use as an exhibition space for the society's collections. It may be that the Weddells chose Henry Grant Morse as their architect because of Morse's experience designing public buildings. Morse had drafted the plans for the Carnegie Public Library in Norfolk, Virginia, and the Carnegie Free Library in Camden, New Jersey. 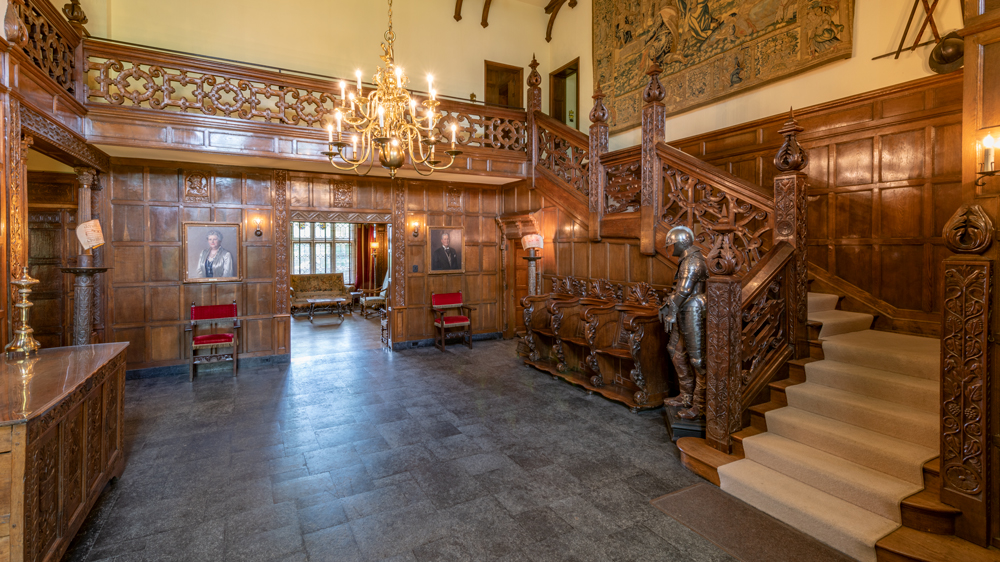 During the Middle Ages, English domestic life was conducted in the great hall. During the period the Weddells lived at Virginia House, this great hall was the entrance used to greet the Weddell's guests. It was also used for entertaining the large groups the Weddells frequently invited to Virginia House. Their eclectic taste in interior decoration is evident. Before Mr. Weddell was appointed to an ambassadorship, the Weddells lived in India and Mexico, where he served as U.S. consul. Most of the objects in the house were collected while they lived and traveled abroad.

This room's atmosphere is achieved by the association of the various decorative elements with the romantic aspects of the English middle ages and Tudor and Stuart England. The Weddells had Charles Duveen, a London antiques dealer, locate as much of Warwick Priory's interior as possible. The seventeenth-century staircase is original to the house and was found in London by Duveen. The paneling was made of twelfth-century oak from Warwick Priory. The sixteenth-century oak front door features linenfold paneling popular with Tudor woodcarvers between 1450 and 1580. This type of paneling originated in Flanders as a representation of linen cloth laid in vertical folds.

Providing electric lighting and central heating, without compromising the atmosphere of Virginia House, presented Mrs. Weddell with a unique challenge. The early nineteenth-century Spanish sanctuary torchères are copies from Renaissance models. The shades were made from vellum pages cut from medieval missals. The switch plates and radiator covers throughout the house were fashioned from brass, cut in the shape of heraldic shields featuring profiles of Elizabethan men and women. Wall plates and shades for wall sconces were created from Spanish escutcheons. The recently conserved seventeenth-century Dutch bronze chandelier was also electrified and features two tiers of eight candles each supported on scrolling arms. A phoenix and a ring of eight trumpeting mermaids top the chandelier. 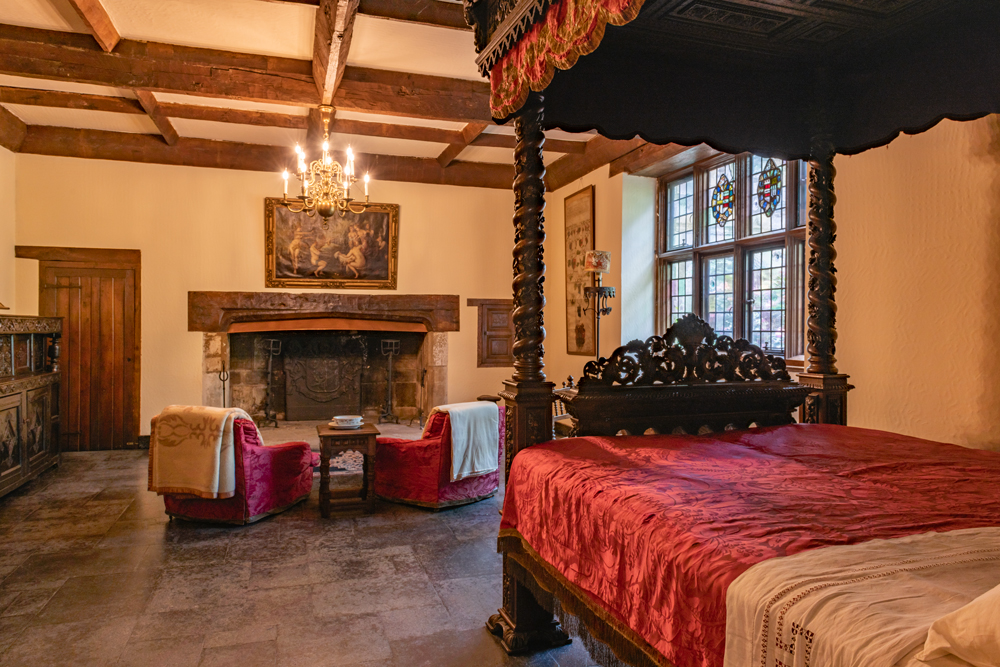 This room is an exact replica of the great hall at Sulgrave Manor, Northamptonshire, England, the ancestral home of George Washington. The facade of this wing is a duplication of the one at Sulgrave Manor. The restoration of Sulgrave Manor in England was completed in 1925 with money raised in large part by American donations.

The screen that divides the gallery from this bedroom was made from Warwick Priory timbers by artisans who lived near Sulgrave Manor. This type of screen partition was used in medieval, Tudor, and Jacobean houses to contain the warm air from the fireplace in the great hall. The fireplace is spacious enough to have a seat inside it on the left side. 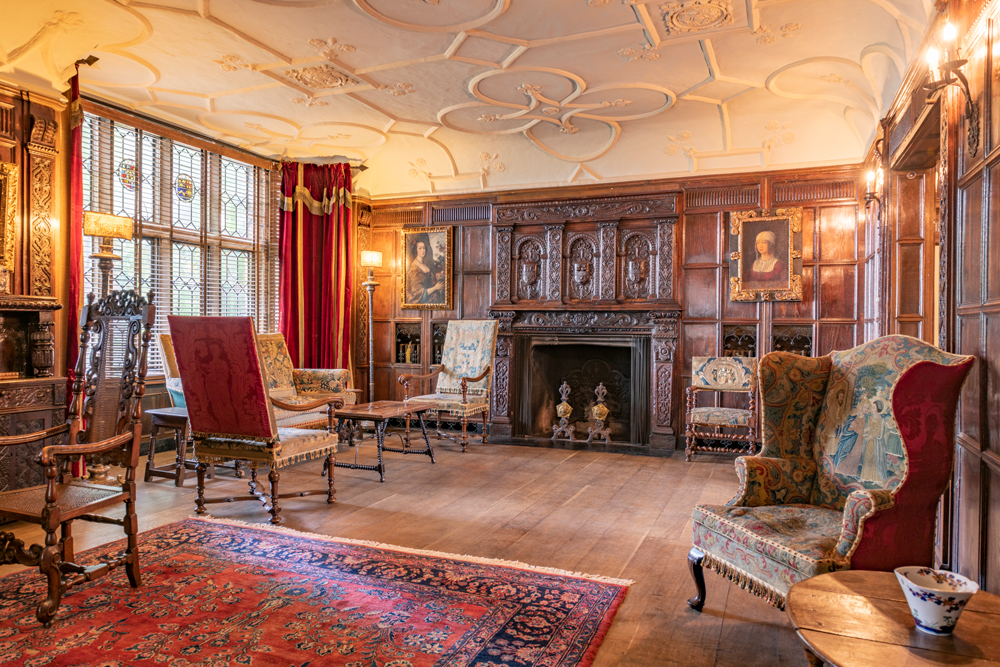 With its southern exposure and bright sunlight, this room seemed more like a sunroom than a withdrawing room to architect, Henry Grant Morse. Mrs. Weddell, however, insisted on the more formal English term, "withdrawing room."

The paneling was originally in a Warwickshire house and gives the room its Tudor air. The ceiling is typical of the elaborately patterned ceilings used in sixteenth- and seventeenth-century manor houses. The fleur de lis and rose en soleil patterning are closely related to those found on the long hall ceiling at Haddon Hall, Derbyshire, England.

The oak fireplace surround is dated 1561 and is a composite of early carved woodwork combined with later carving created in the earlier style. To achieve a late-medieval look, the nineteenth-century carver incorporated three armorial ornaments set into the arcaded panels. Once again, we see the strapwork design that came to England from the Low Countries.

Throughout the nineteenth century, wealthy Americans flocked to Europe to purchase decorative woodwork, paintings, and other art objects for the purpose of giving their new "manor" houses an Old World air. Mrs. Weddell was particularly adept at blending Elizabethan, Spanish, Spanish Colonial, and Renaissance Classical-style objects and furniture with Oriental carpets, rich brocades, and velvets bordered with metallic galloons, to create a bold and dramatic effect. 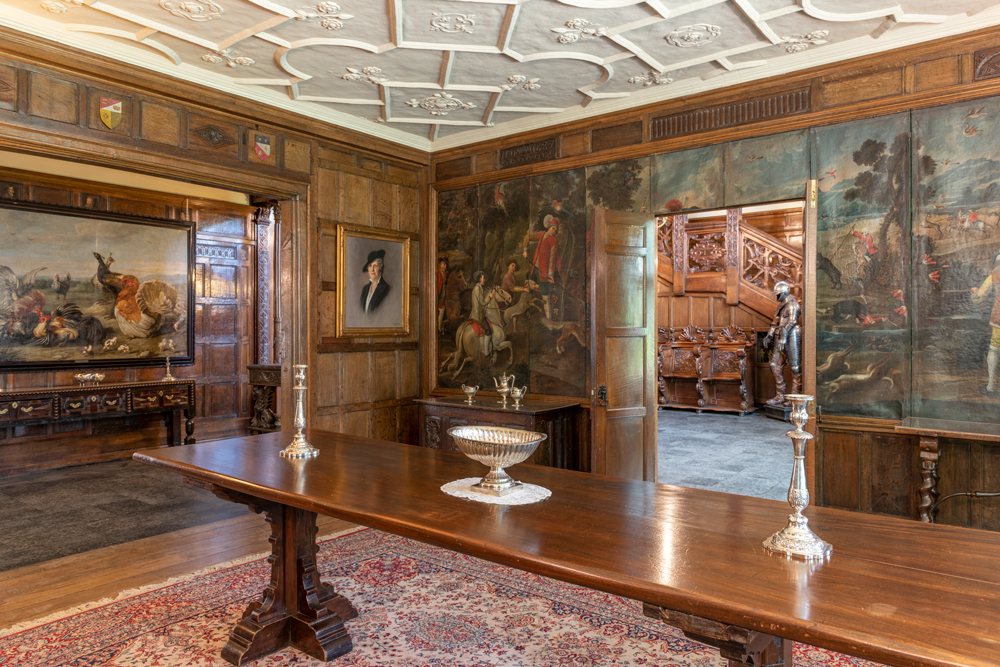 While in residence, the Weddells had lunch and dinner in this room every day. All the meals were formal occasions, and the Weddells dressed in evening clothes for dinner.

One of the house servants, Elliot Lyerly, is said to have been talented in carving elaborate objects out of food to serve as garnishes. The dining room was already completed when the Weddells found the paneling from Redbourne House, Hertfordshire, England, in 1932 at Osborne, Ltd., a London antiques dealer. A ten-fold, eighteenth-century Mexican hunt scene screen is above the dado on the west wall. It was common in the Victorian era to display hunt scenes in the dining room.

The court cupboard and the chest in front of the hunt scene are both English pieces. The cedar dining table was made in Mexico and is a copy of the type of refectory table found in medieval monasteries. The leather upholstered dining chairs are typical of those found in Europe during the sixteenth century.

The portrait over the fireplace is of Ambassador Weddell and was painted by Philip de Laszlo in 1936. Mr. Weddell wears the Order of the Condor, which he received from the Bolivian government, as well as academic robes signifying the honorary degrees he received during his lifetime. 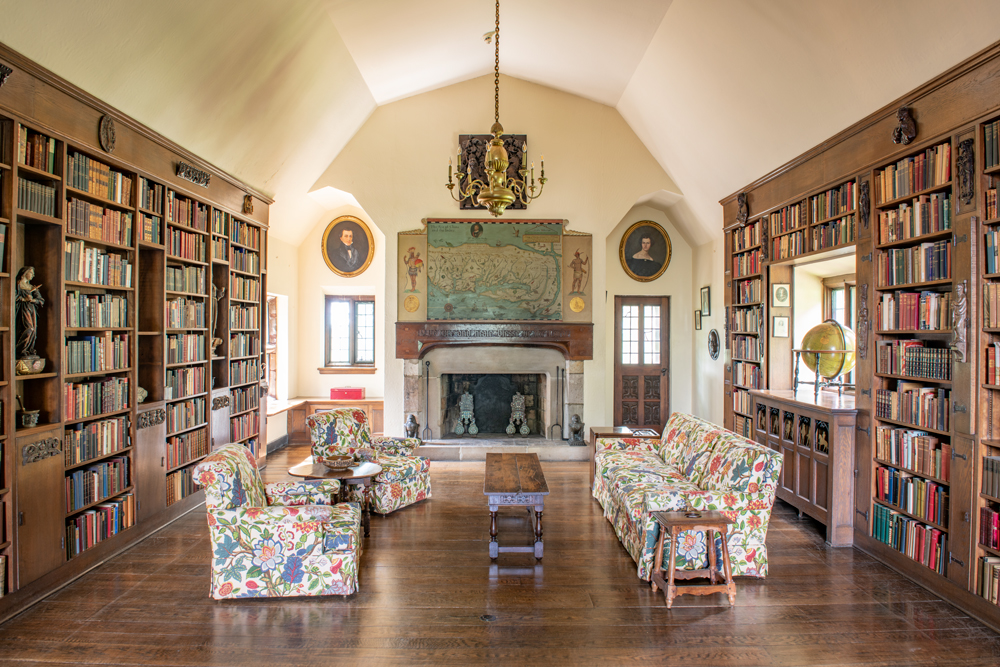 The library with its ten thousand volumes recalls the hushed academic atmosphere of a medieval scriptorium, where monks labored to illuminate manuscripts. The Weddells had eclectic tastes in reading. Mr. Weddell, in describing his library said, "the two principal readers have been guided solely by their own tastes and fancies in [the library's] formation, with the underlying idea of achieving a rounded collection."

The Weddells used the library for informal family gatherings when they sat in front of the fire listening to the radio, reading, playing cards, and conversing. Mr. Weddell had a secret door placed in the east bookcase so he could escape unseen into his bedroom. His ruse was quickly discovered by a visiting child. 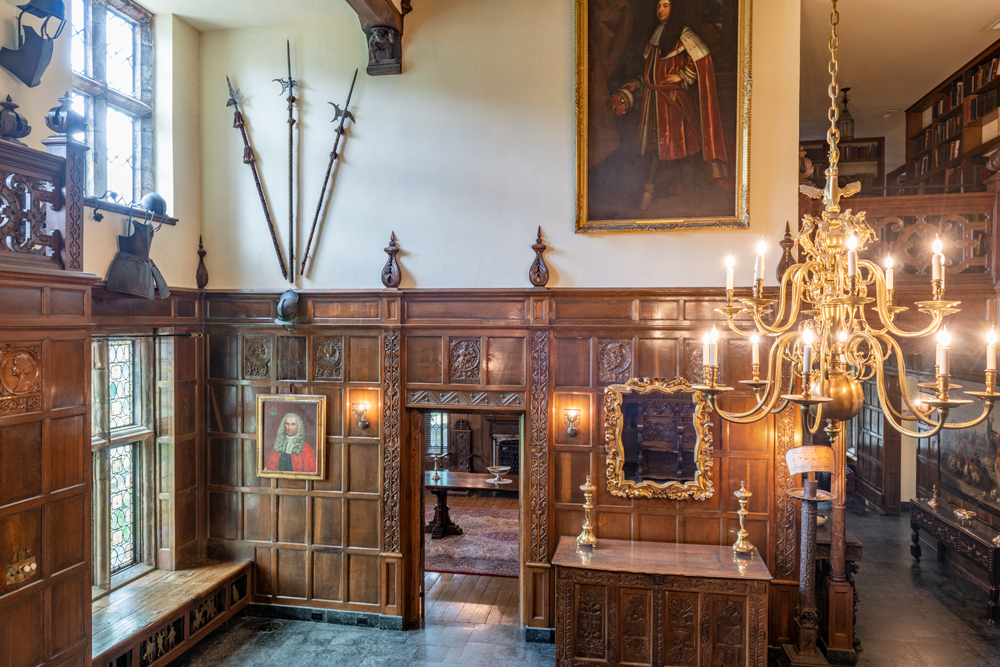 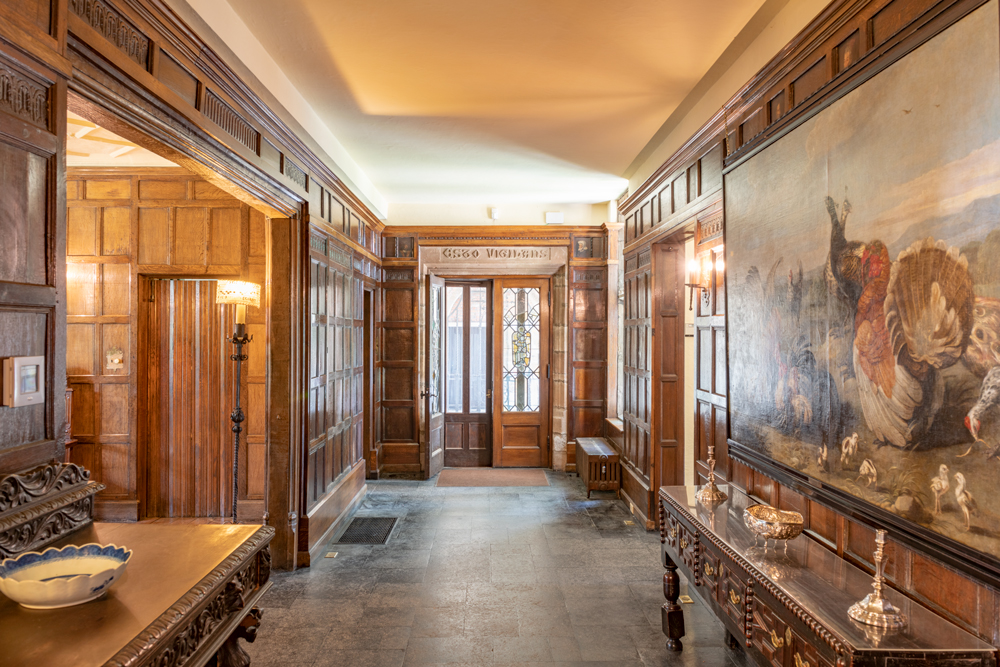 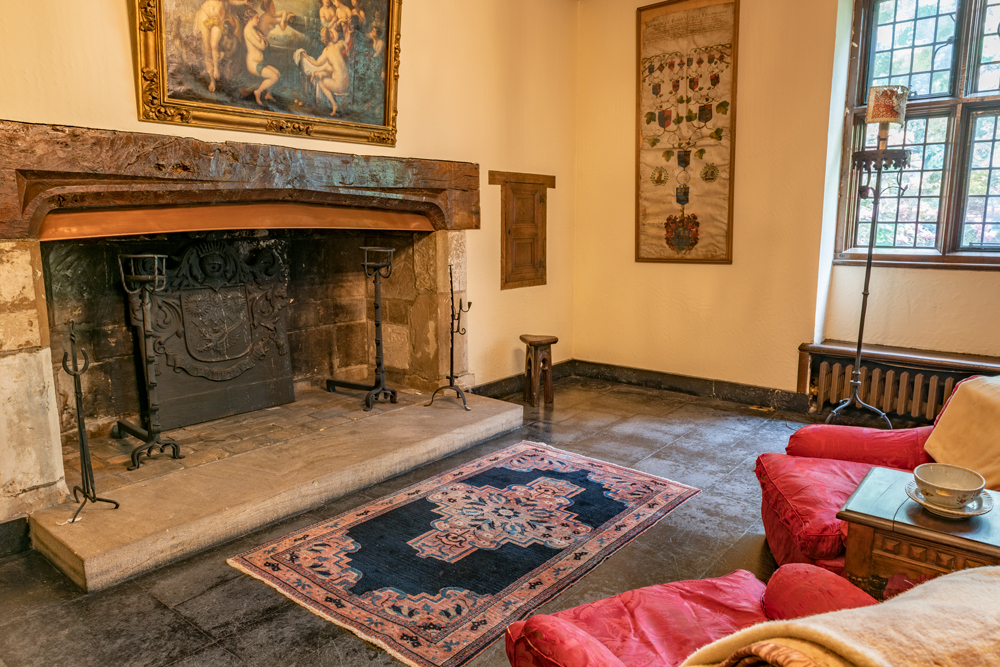 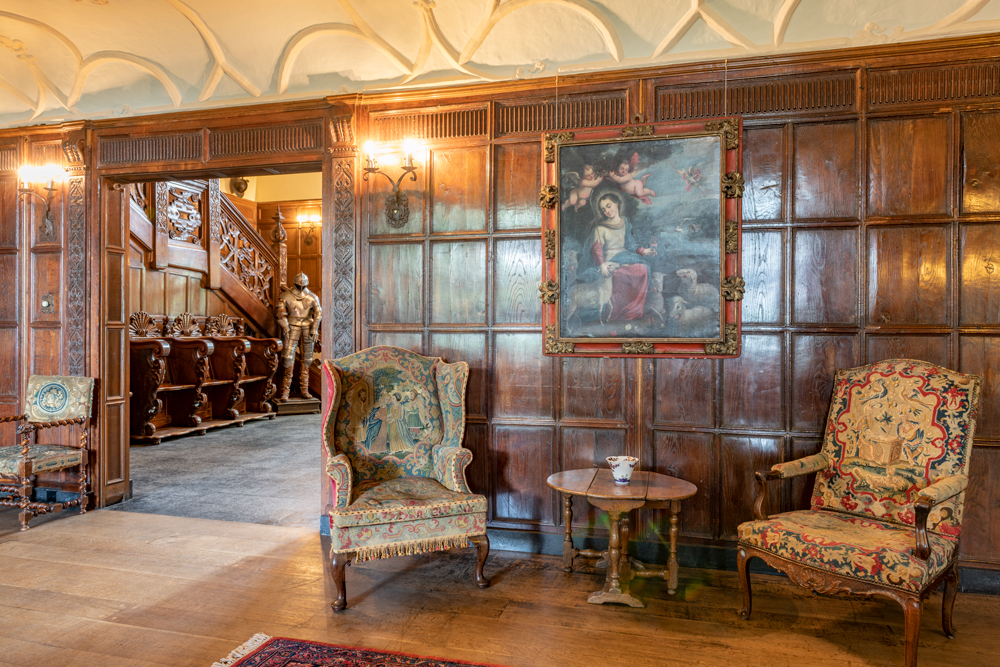 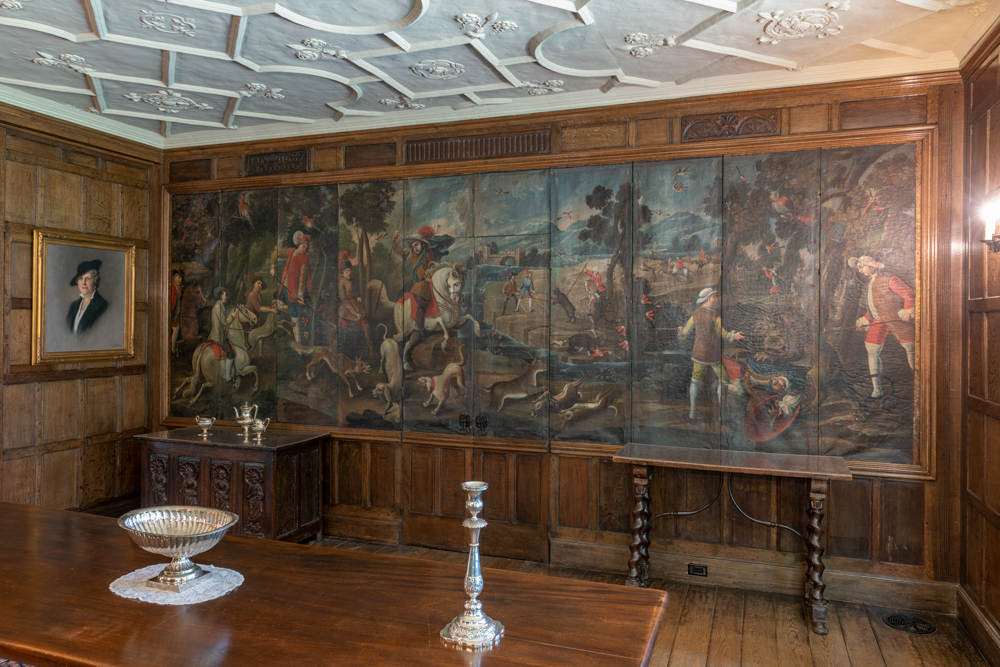 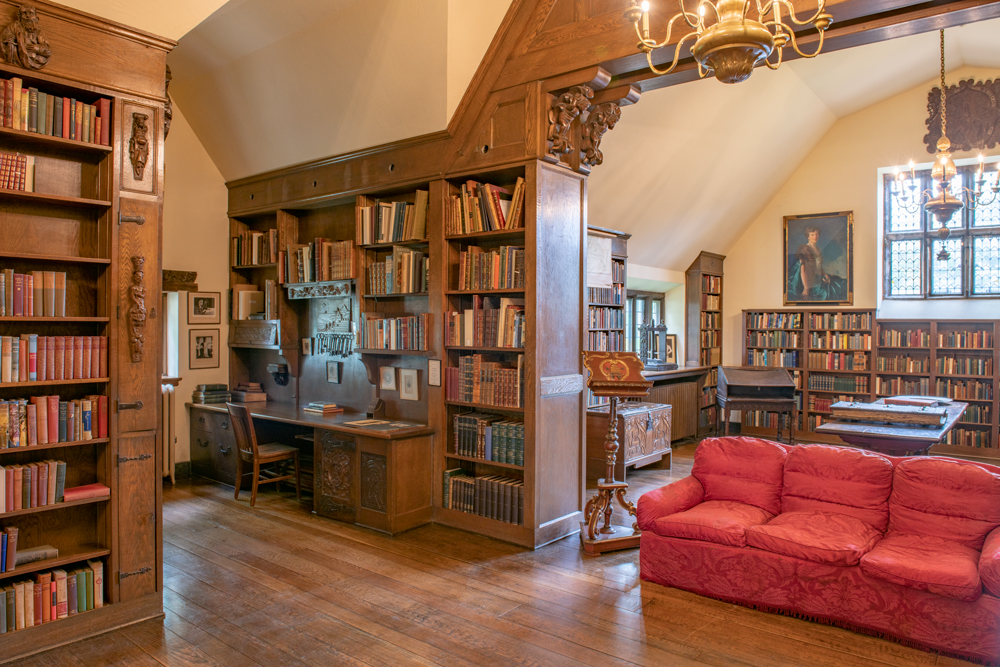 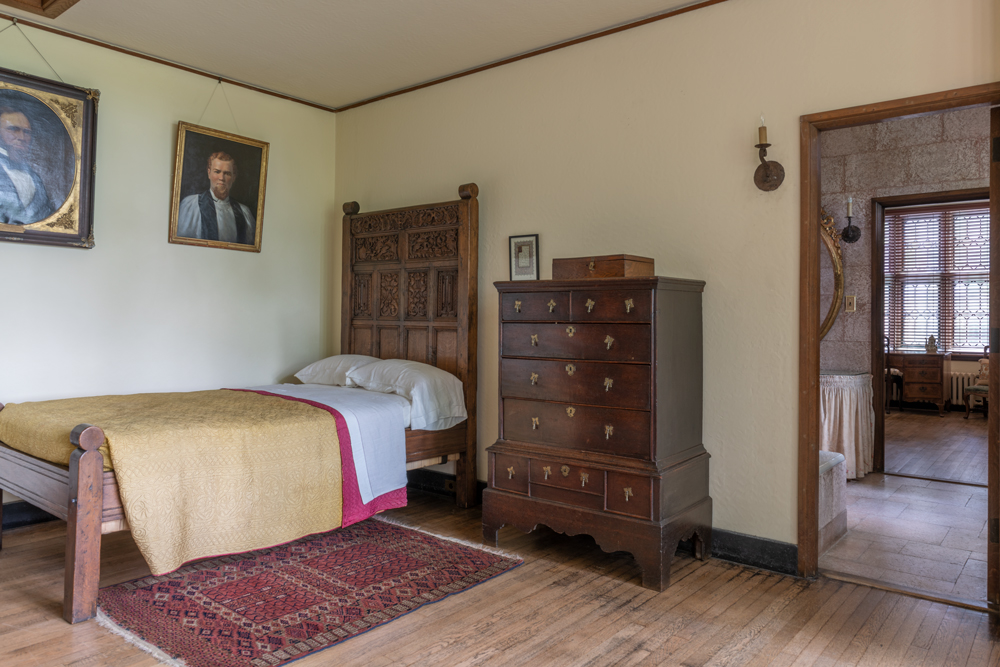 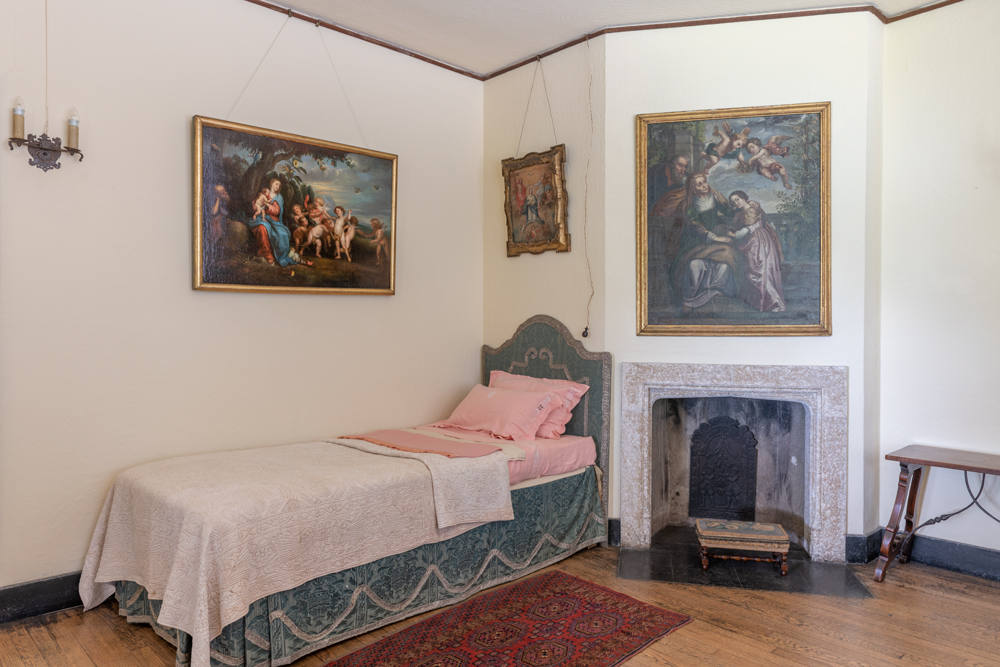 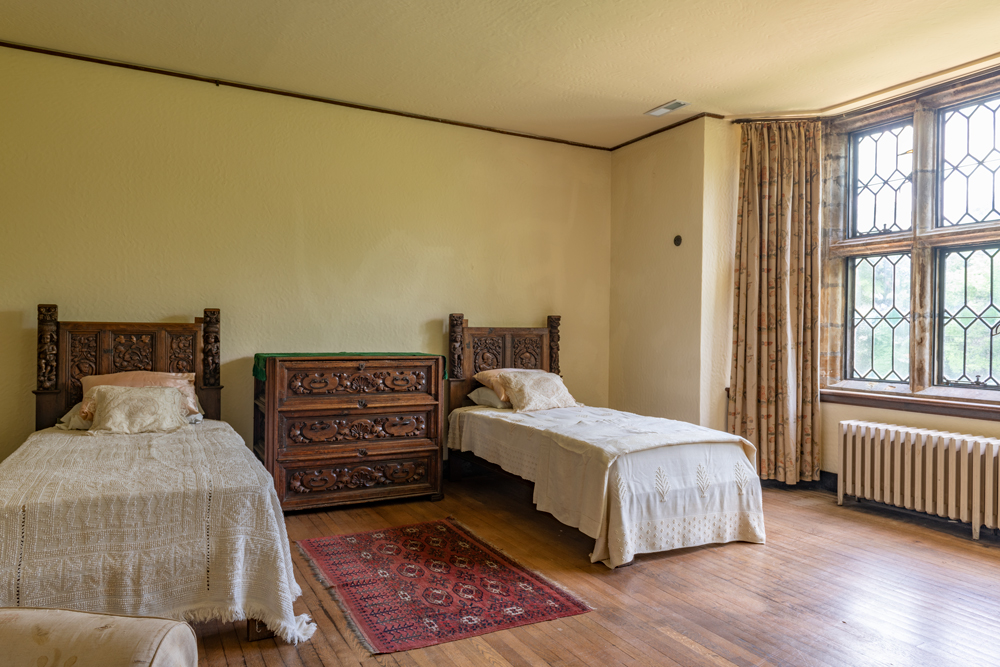 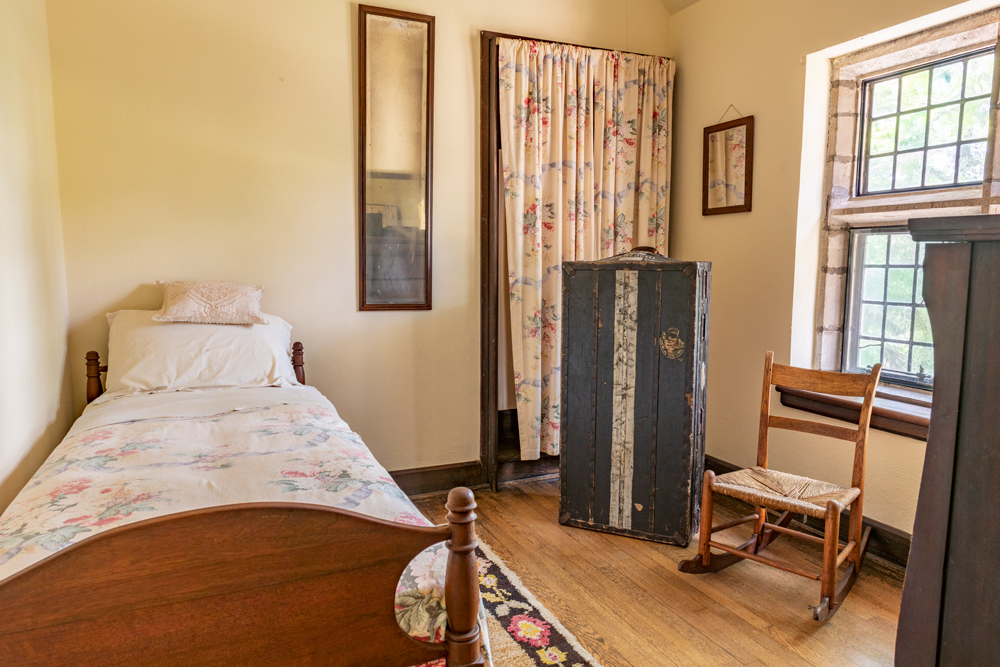 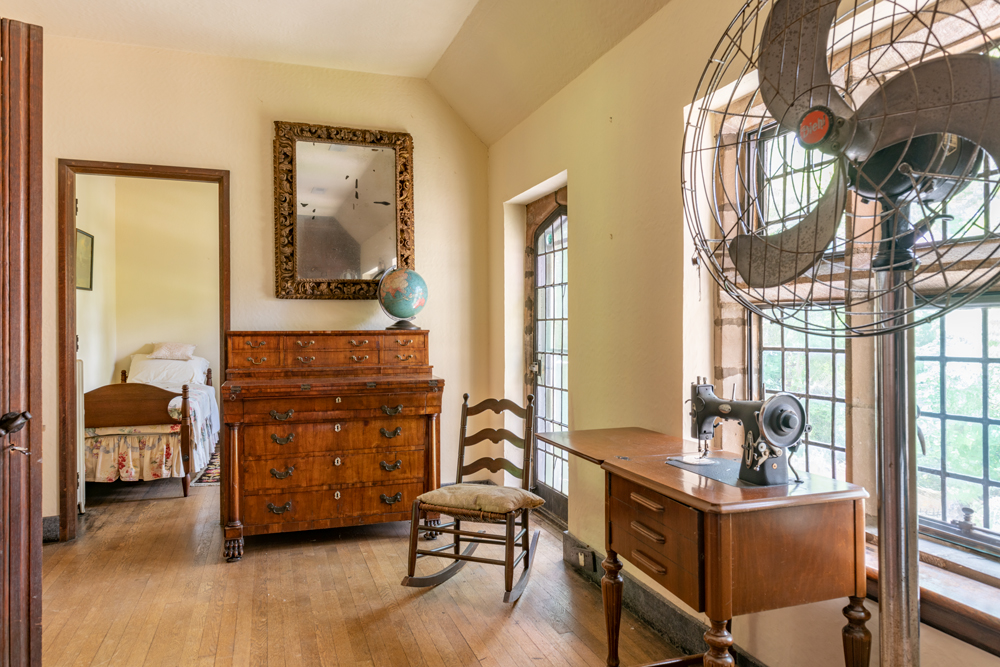