How Did Civilians Suffer?

White women and children were left to fend for themselves, and many became widows and orphans when one in five Confederate soldiers died.

In the countryside, armies destroyed and appropriated property, seized food, burned fences, and turned houses into hospitals. Governments, schools, and churches in their path were closed.

In Confederate-controlled cities, overcrowding, shortages, inflation, and hunger plagued everyone. Residents of northern Virginia, the Eastern Shore, and Norfolk were subjected to curfews, confiscation of property, and sometimes exile by occupying Union forces. The western counties suffered pitiless guerrilla warfare.

Free and enslaved African Americans were separated from their families to labor for the army. Free blacks saw their freedom further restricted as white southerners questioned their loyalty to the Confederacy. Some of the enslaved were removed far from Union lines to prevent their escape. Some families of those who did escape were abused. 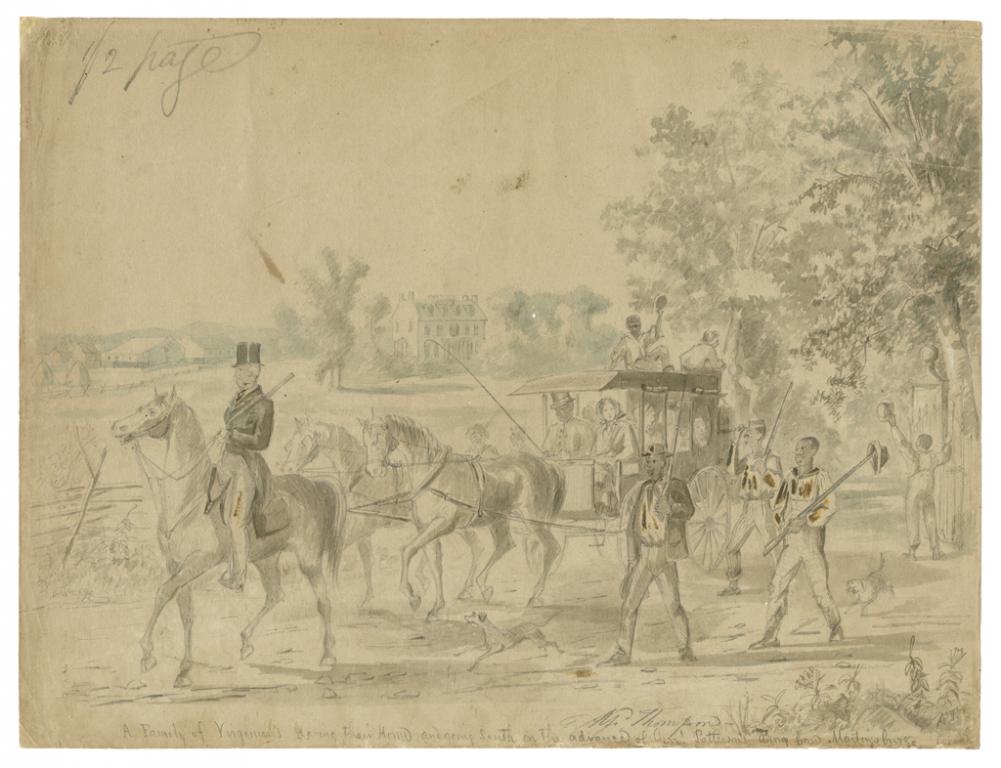 A Family of Virginians Leaving their Home by Horse and Carriage with the Master of the House Riding in Advance and Slaves Marching Alongside Upon the Advance of Genl. Patterson’s Army from Martinsburg, 1861.

The Plight of the Refugees

An artist observed the flight of refugees in anticipation of the advance of U.S. general Robert Patterson’s forces and both drew and wrote what he saw: "On the advance of Genl. Patterson in the direction of Winchester. Many Wealthy families of Berkeley, Clark, & Jefferson Counties who from their Secession proclivities considered it unsafe to remain at home, deserted their farms and plantations taking their Servants and such articles of Comfort as could be conveniently carried, and moved off up the Valley, beyond Woodstock of Harrisonburg. For some days after Genl. [Joseph] Johnson fell back on Winchester numbers of Carriages could be seen containing the female portion of a family, the Master of the House riding in advance with fowling piece or rifle slung to his back, such of the woman servants not left behind to take care of the property being sent ahead in a Wagon, the Males marching beside the Carriage each armed with a gun, as they say, ' to keep de d---- Yankees and abunlishioners from harmin de Ladies.'"

The Lees Lose Their Property

Once Virginia seceded, Robert E. Lee's family knew that Arlington, their home overlooking Washington, D.C., would soon be occupied. By war’s end, it would be lost to them forever. On leaving, they were able to carry away some family portraits and heirlooms, including this silver spoon that had once belonged to Martha Washington’s son. It is marked "T.T." for Thomas Tookey, carries London hallmarks for the year 1774, and is engraved with the crest of John Parke Custis (Mrs. Lee’s grandfather).

Many books were taken from the Lee library, and Pvt. Henry E. Rowell of the 1st Michigan Infantry even took their doormat as a souvenir. After the war, Selina Gray, a former enslaved woman still living at Arlington, wrote Mrs. Lee that "Your things at the time of the war was taken a way by every body."

Winchester was strategically located at the head of the agriculturally rich Shenandoah Valley. Union troops occupied the town often. On May 25, 1862, Federal troops were driven out. One eyewitness observed "old men and women, ladies and children, high and low, rich and poor" lining the streets, many "weeping or wringing their hands over the bodies of those who had fallen before their eyes . . . others shouting for joy at the entrance of the victorious Stonewall Brigade." Virginia artist William D. Washington considered the incident a fit subject for this large patriotic painting. The town changed hands so often—around seventy—two times—that Mary Greenhow Lee "did not get up to see whether they were Confederates or Yankees." 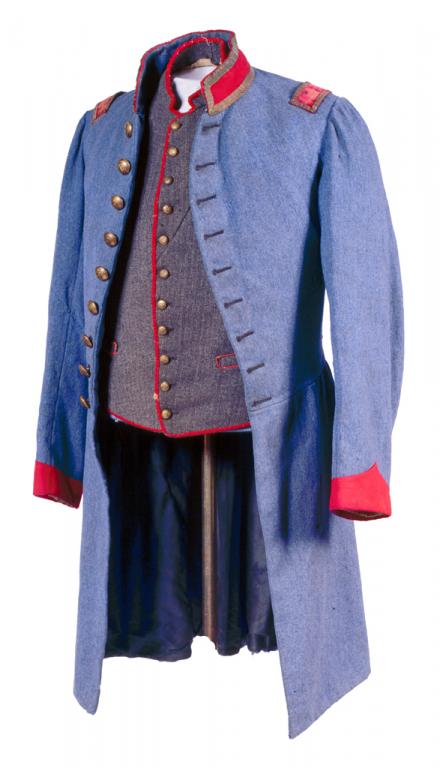 Twenty—five thousand Virginia soldiers died during the Civil War, and rarely did next of kin receive timely notification—if any. But when the battlefield was nearby, the horror of death could be quickly conveyed and especially shocking.

At her home in Richmond on July 1, 1862, Elizabeth Munford heard the thunder of cannon fire from the nearby battle of Malvern Hill, where her son Lt. Charles Ellis Munford served with the Letcher Light Artillery. She wrote her daughters that she expected to "hear from Ellis tonight." Late that evening, his lifeless body was brought directly from the field. Charles Munford, Sr., suffered a "dreadful attack." Following the funeral the next day, he consoled himself with the thought that his son died "standing up to his duty like a true born Virginian defending his home & his Country." 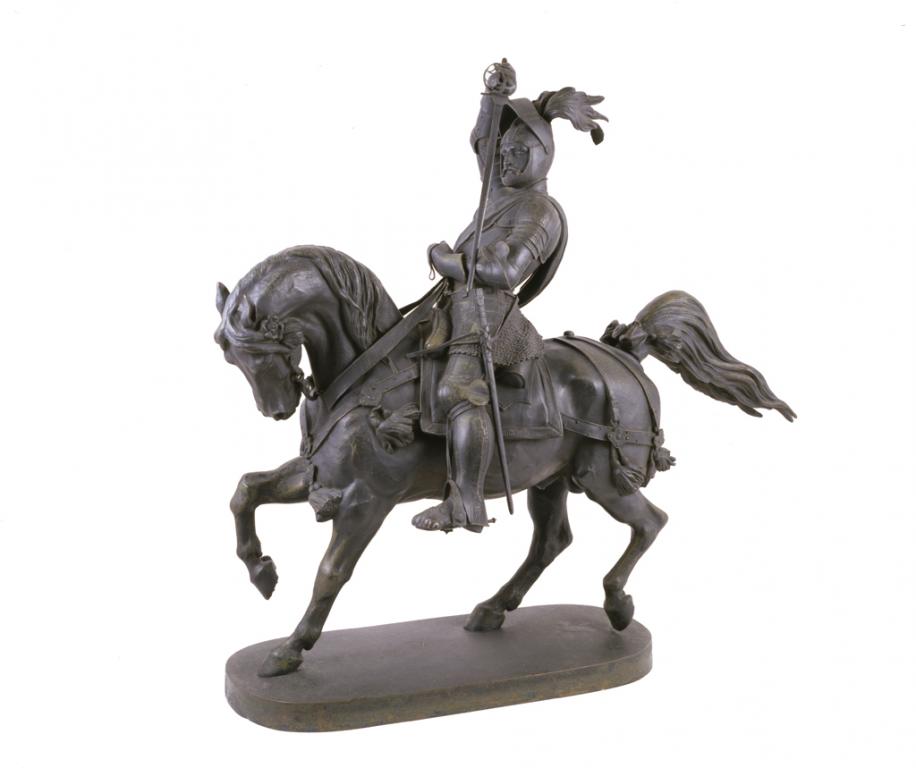 In December 1862, a Union army of 110,000 soldiers was halted by 75,000 Confederates at Fredericksburg, a small community of 5,000 residents. Confederate general Robert E. Lee ordered women and children to leave Fredericksburg for their safety. They took refuge in churches, barns, and tents. Among them were Douglas and Anne Gordon and their three children.

On their return, the Gordons found "every room" in their house "torn with shot, and . . . all the elegant furniture and works of art broken and smashed." One ambitious soldier even carried off the Gordons’ heavy bronze replica of a European statue of Emmanuel Philibert of Savoy, a sixteenth-century soldier-prince. The Gordons had acquired it on a wedding trip to Italy. The looter sold the statue to U.S. colonel Joshua Owen of Pennsylvania.

Less than a year later, Anne Gordon’s sister—in—law Anne Thomas overheard a United States soldier near her Baltimore home give such an exact description that Mrs. Thomas knew he was talking about her brother’s statue of Emmanuel Philibert of Savoy. Using President Lincoln’s physician as an emissary, she demanded and got General Order No. 360, which ordered the return of the statue to its owner. 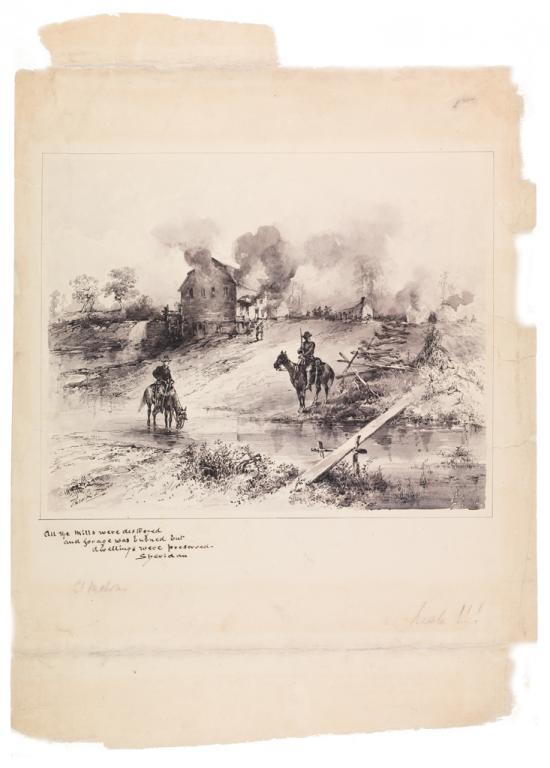 Countries at war, frustrated by dogged resistance and military setbacks, often become less discriminating in their targets and tactics. Confederate general Robert E. Lee called Union general John Pope "a miscreant" for ordering in 1862 that personal property (food, forage, animals, and other supplies) could be seized for army use; that civilians could be conscripted for railroad, wagon road, or telegraph repair; that civilians who fired on Union troops would be executed without trial; and that "disloyal" male civilians would be expelled outside United States lines. Pope's reversal of the initial U.S. policy of conciliation was actually only a return to brutal warfare as it had been practiced for centuries throughout the world.

The whole southern economy that supported Confederate armies became an explicit target of war. United States troops left a ninety-two mile stretch of the lower Shenandoah Valley with "little in it for man or beast." 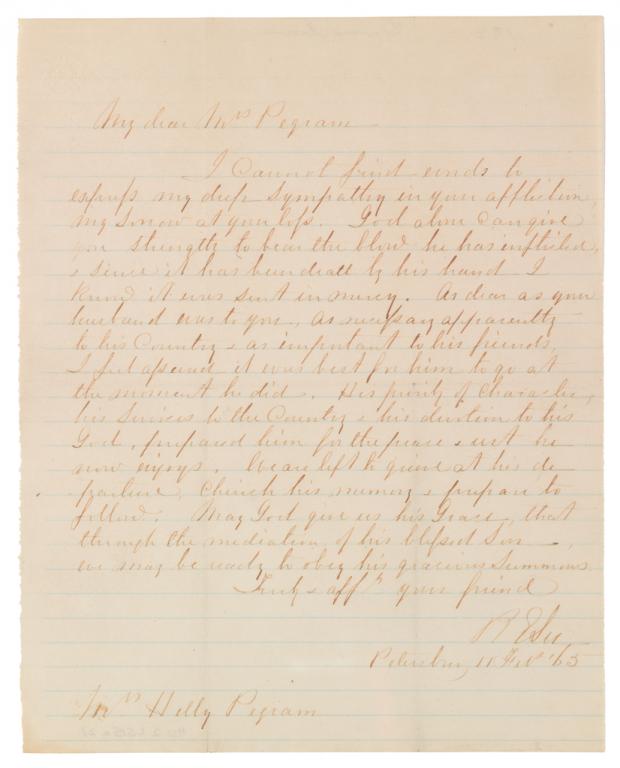 "A Fiancée of Three Years, a Bride of Three Weeks, Now a Widow"

Hetty Cary of Baltimore—said to be one of the most beautiful women in the South—escaped to Richmond in the early days of the war. It was there in 1862, at age twenty—six, that she met thirty—two—year—old John Pegram—one of Virginia's most eligible bachelors. The couple was soon engaged, and their January 1865 wedding was a major social event in the besieged Confederate capital. Shortly after the wedding, Hetty took up residence in the Petersburg farmhouse that served as her husband's headquarters.

After eighteen days of marriage, John was killed at the battle of Hatcher's Run. Hetty returned to Richmond with her husband's body, and exactly three weeks after their wedding, John’s funeral took place in the church where the couple had been married.

In a condolence letter to Hetty, Gen. Robert E. Lee wrote, "I cannot find words to express my deep sympathy in your affliction…. As dear as your husband was to you, as necessary apparently to his Country and as important to his friends, I feel assured it was best for him to go at the moment he did….We are left to grieve at his departure, cherish his memory and prepare to follow."