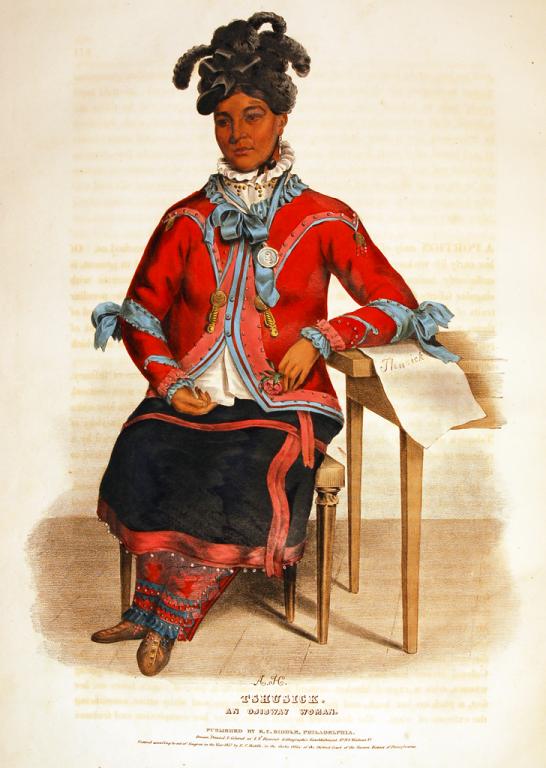 Tshusick from History of the Indian Tribes of North America (Vol. I)

In the museum's rare book collection, a remarkable compilation of images exists in History of the Indian Tribes of North America, by Thomas McKenney and James Hall. Published between 1836 and 1844, the three folio volumes contain the historical background of various tribes, biographical sketches of American Indian leaders, and lithographs of 120 Native Americans. The lithographs stem from portraits that were commissioned by McKenney and painted when the subjects visited Washington, D.C. Charles Bird King (1785–1859) painted many of the portraits; others were done by James Otto Lewis (1799–1858).

Thomas Loraine McKenney (1785–1859) was named superintendent of American Indian trade in 1816, and then-Secretary of War John C. Calhoun appointed McKenney head of the newly established Bureau of Indian Affairs in 1824. McKenney commissioned portraits of many members of the various Native American delegations to Washington and arranged for the paintings to hang in a gallery in the War Department. Some years later, the portraits were transferred to the Smithsonian Institution. When President Andrew Jackson removed McKenney from office in 1830—perhaps over a dispute involving Jackson's Indian Removal Act—McKenney teamed with James Hall (1793–1868) to work on the book that would take years to complete. A lawyer, author, and editor, Hall wrote sympathetic tracts on Native Americans in the 1830s. He also transcribed Native American oral sources and collected paintings of American Indian culture. Hall wrote much of the text for the three-volume History of the North American Tribes of North America.

Although McKenney's name is attached to the publication, the editors completed the project without his participation. The hand-colored lithographs that appear in the History of the Indian Tribes of North America were modeled on copies of the War Department portraits created by Henry Inman (1801–1846). Most of the original portraits were lost to a fire in the Smithsonian in 1865; Inman's copies and the lithographs represent the surviving images for many of those paintings. McKenney, a resolute Whig, sought a political position after President Jackson left office, but when he was spurned, he became a public speaker on Native American affairs. Gradually, McKenney fell into obscurity and poverty; outliving his wife and his son, he died penniless in Brooklyn, New York. The publication he instigated, however, remains an important collection of Native American images and nineteenth-century American art, as well as an early ethnographical study. 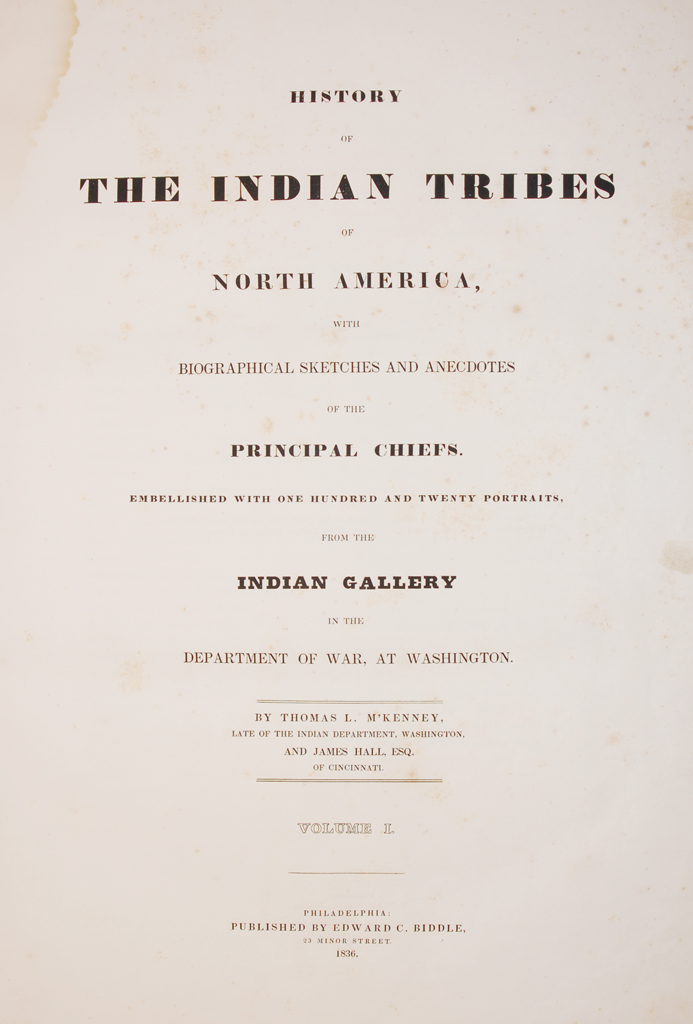 Title Page of History of the Indian Tribes of North America (Vol. I)
The society's edition of History of the Indian Tribes of North America was donated by Donald Haynes (1934–1988), who was director of the Virginia Historical Society from 1986 to 1988. Formerly the state librarian for Virginia, Haynes sought to transform the society by emphasizing efforts in education, advocating more museum exhibits, and modernizing overall operations. Haynes donated several items to the society's collections, including a group of rare Edgar Allan Poe publications and early editions of Acts of the General Assembly of the State of Virginia. (VHS call number: Rare Books Folio E77 M13 v. 1)
Image 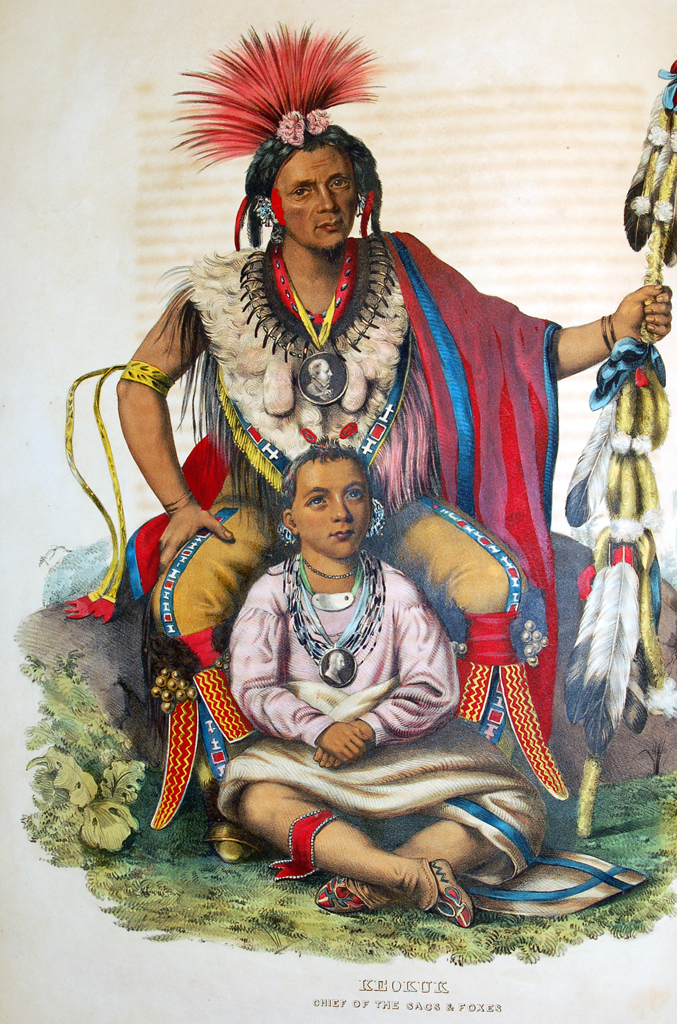 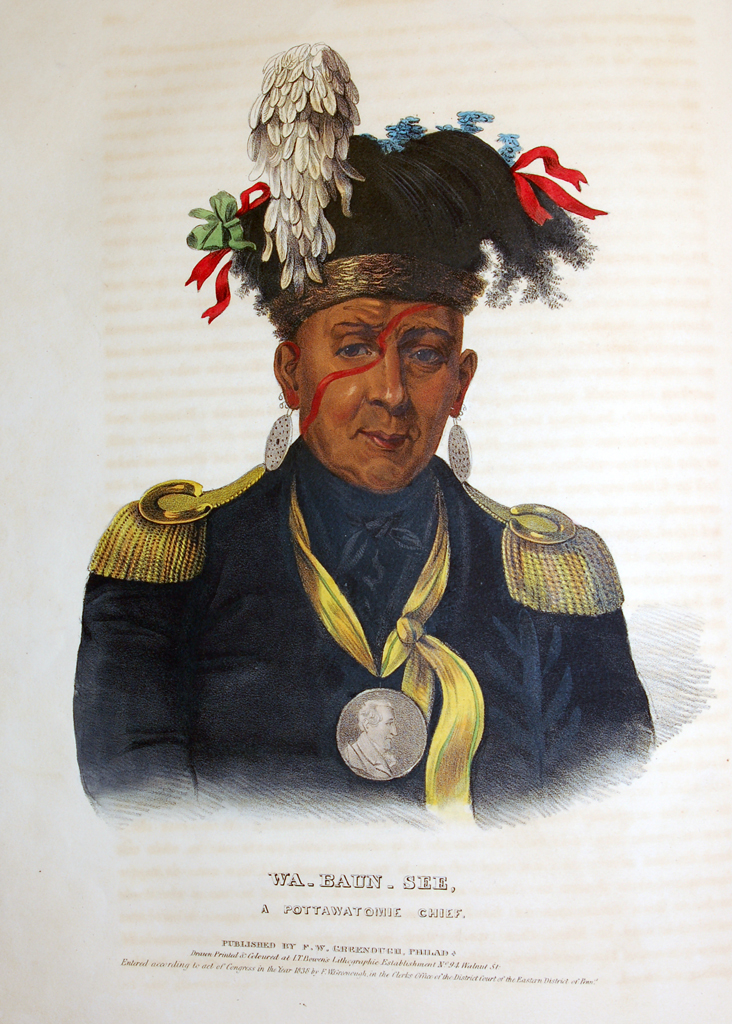 Wabaunsee from History of the Indian Tribes of North America (Vol. II)
The authors relate "In the portrait which accompanies this sketch we are happy . . . to exhibit an excellent likeness of this distinguished man" and that "his general character . . . is that of a warrior of uncommon daring and enterprise, and a chief of great intelligence and influence." Waubansee represented the Pottawatomie people. (VHS call number: Rare Books Folio E77 M13 v. 2)
Image 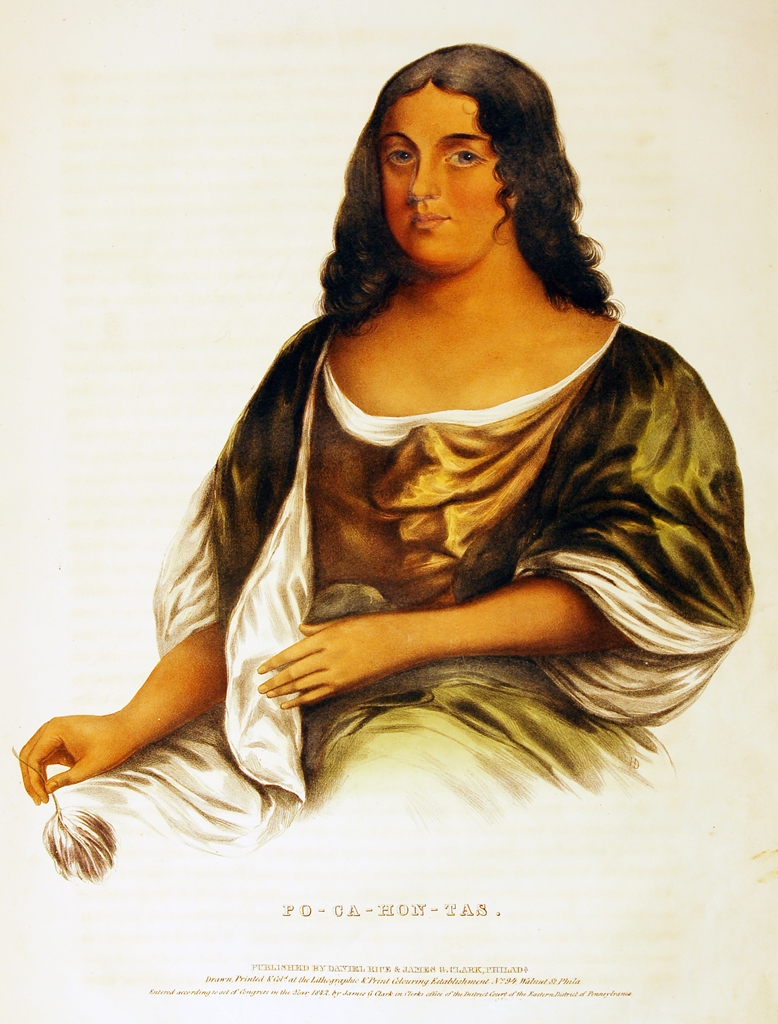 Pocahontas from History of the Indian Tribes of North America (Vol. III)
This image of Pocahontas is often referred to as the "Turkey Island Portrait." Ryland Randolph (1734–1784), the great-great-grandson of Pocahontas, acquired a pair of portraits of Pocahontas and John Rolfe in the late eighteenth century from Rolfe descendants in England. Randolph brought the portraits to his family's Virginia home, at Turkey Island in the James River near Jamestown. Matthew Sully, nephew of the American portraitist Thomas Sully, produced a copy of the "Turkey Island" image of Pocahontas in 1830 at the urging of his uncle. Daniel Rice and James Clark produced this color lithograph of Sully's copy in 1842. (VHS call number: Rare Books Folio E77 M13 v. 3)