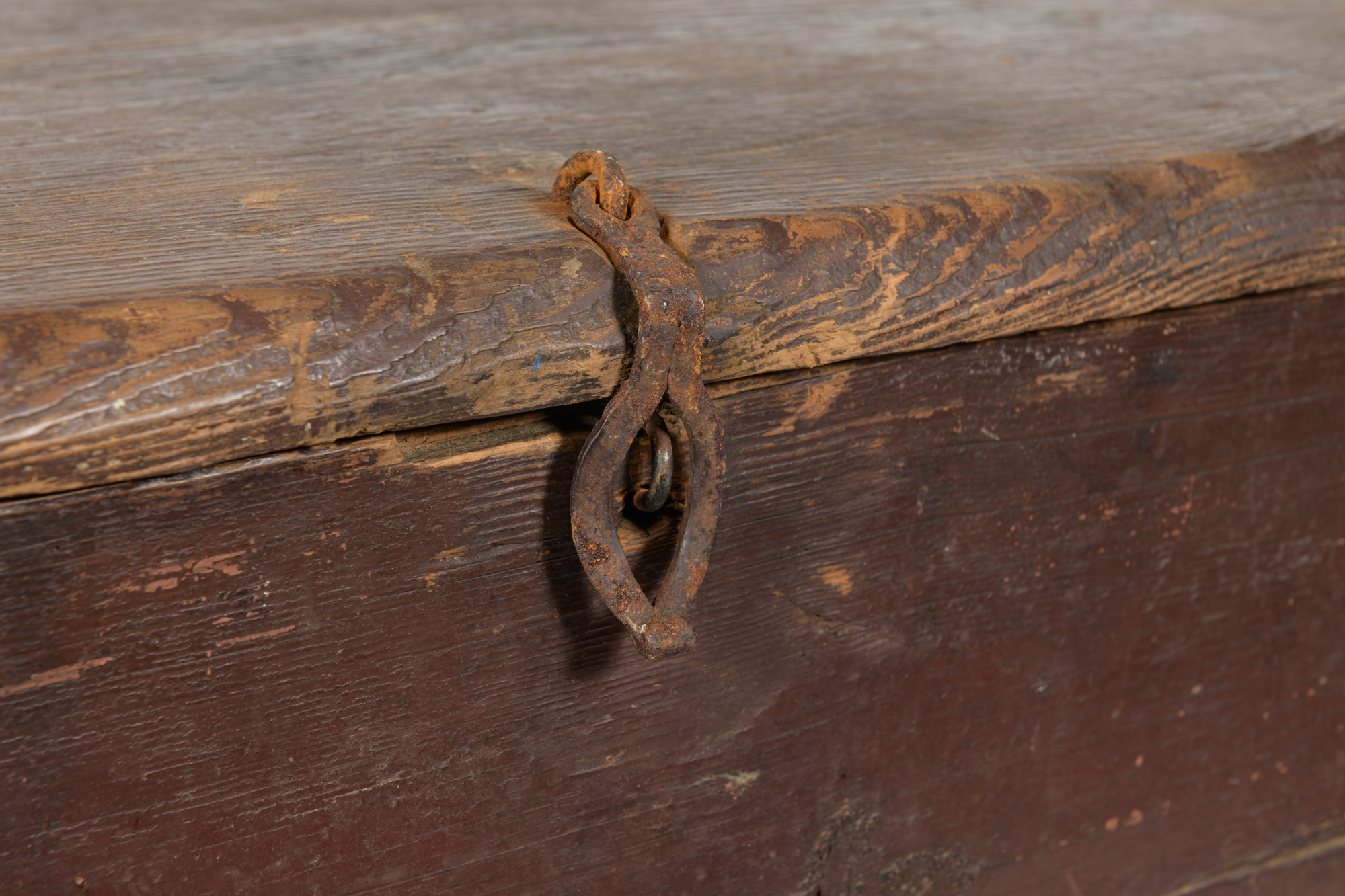 It is, from the outside, unremarkable. With a coat of faded red paint and a crude hand-forged hasp to secure its lid, the simple pine chest – once used to store tools, seed, or feed – could have easily been discarded.

But when it was recovered from a Mecklenburg County barn in 2010, its contents yielded unexpected treasures. Hundreds of letters, dozens of cards and postcards, contracts, farm journals, receipts, and newspapers were packed inside.

And one of them – an 1878 certificate issued by The Grand Army of Republicans to Prince Edward County sharecropper James Jones – illustrates the determination of Black Virginians to achieve the promises of emancipation.

Born into slavery, Jones was 14 when the Civil War ended in 1865, and he came of age as millions of freedmen across the South sought the rights of full citizenship. Jones married Charity Scott in 1872, and the following year, he likely exercised his right to vote for the first time. 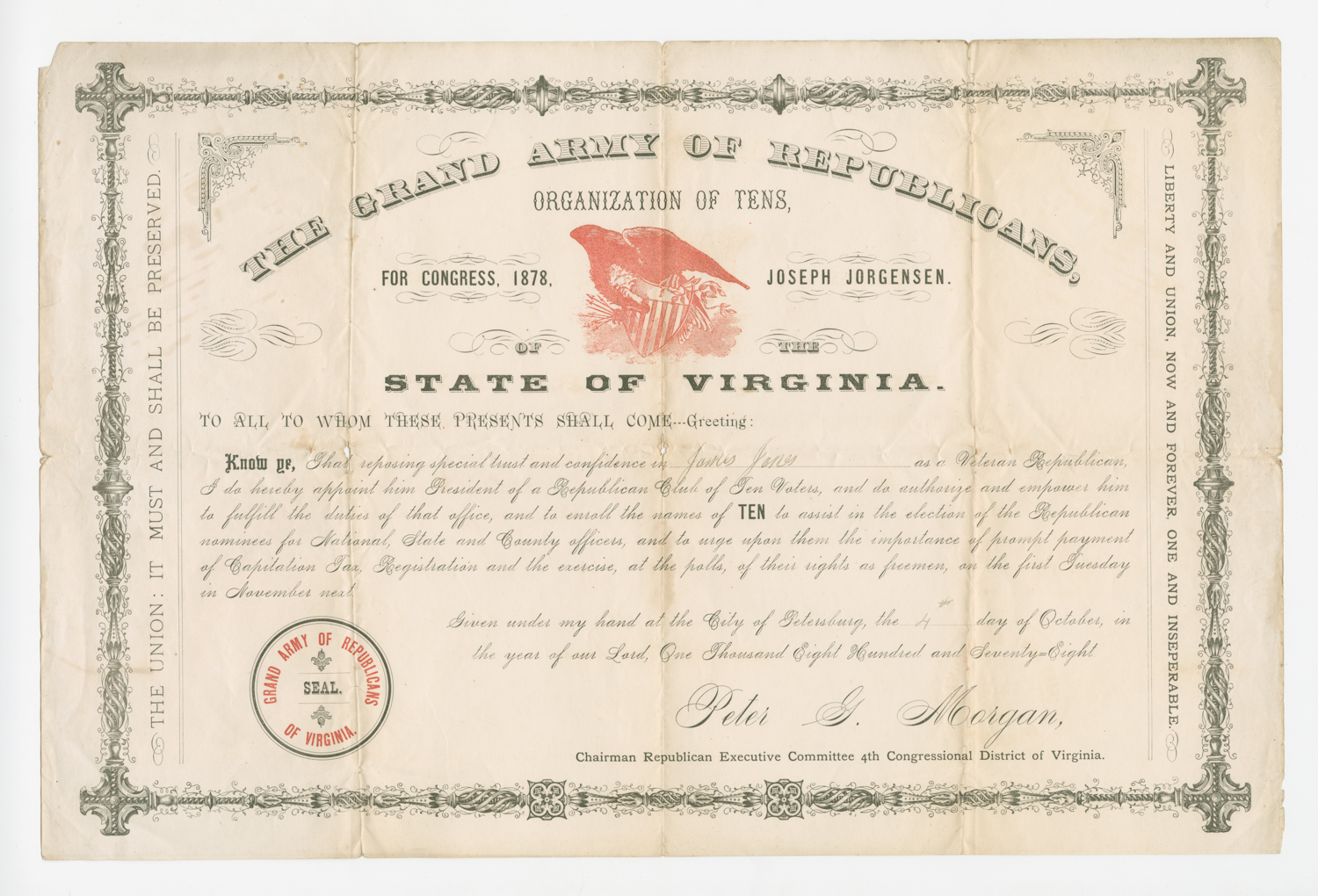 James Jones's certificate appointing him to "The Grand Army of Republicans, Organizations of Tens."

Like most African Americans during this period, Jones supported Republican Party candidates. His vote may have contributed to the election of another Prince Edward native: Tazewell Branch was among nearly 20 Black men elected to Virginia's House of Delegates in 1873.

Despite federal protections, voting rights for Black Virginians were continuously under assault. In 1876, white conservatives who held power instituted a poll tax and passed laws to strip men convicted of petty offenses of their right to vote. These threats may have intensified Jones’s activism.

By 1878, he was influential enough to be named president of a Republican Club of Ten Voters. As part of this voting drive, Jones submitted a list of 10 Black friends and neighbors to support Republican candidates.

The trunk also contained Jones’s 1880 Readjuster Party ballot. A biracial coalition, the Readjusters sought to "adjust" downward the amount of public debt incurred in the decades before the Civil War, and they proposed more funding of public education in Virginia.

With strong support of Black voters, the Readjusters won all statewide offices in 1881 and controlled both chambers of the General Assembly. But their ascendancy was short-lived: By 1883, Democrats regained control of statewide politics and passed laws that restricted Black voting.

By 1888, Jones purchased his own land in Prince Edward and established a comfortable life as a tobacco farmer. When he died in 1929, the family papers passed to his son, Anthony, and moved with him to Mecklenburg.

The collection later passed to more descendants. In the 1960s, Theodore Roosevelt Jones deposited the last of the documents into the chest, an unassuming container that preserved four generations of family history – and part of Virginia's Black history, too.

The original version of this article was published in the Richmond Times-Dispatch’s Discover Magazine as “Unassuming chest holds historical treasure from rural Virginia” on February 13, 2021. View original article.