Skip to main content
The VMHC is closed for construction until July 1, 2021. 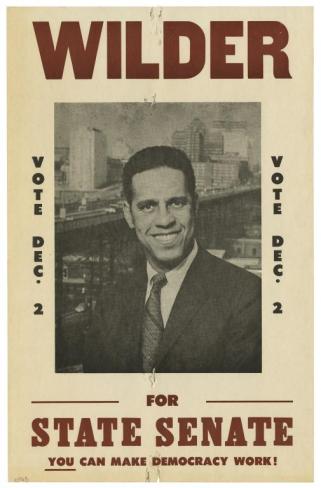 Lawrence Douglas Wilder was born on January 17, 1931, in Richmond, Virginia. The grandson of slaves, he was named after abolitionist-orator Frederick Douglass and poet Paul Laurence Dunbar.

Wilder attended Richmond's racially segregated public schools—George Mason Elementary and Armstrong High School. In 1951, he graduated from Virginia Union University with a degree in chemistry. He served in the army during the Korean War, during which he won the Bronze Star for heroism in combat. After the war, Wilder returned to Richmond and worked as a chemist in the state medical examiner's office. Using the benefits provided under the G.I. Bill of Rights, he studied law at Howard University in Washington, D.C. He received his degree in 1959 and after passing the bar in Virginia established his own law firm, Wilder, Gregory, and Associates.

In 1969, Wilder entered politics, running in a special election for the Virginia state senate. He won and became the first African American state senator in Virginia since Reconstruction. Wilder spent ten years in the General Assembly and was recognized as one of its most effective legislators.

In 1985, Wilder was elected lieutenant governor. Four years later, he ran for statewide office again, and, on January 13, 1990, L. Douglas Wilder became Virginia's sixty-sixth governor. He was the first elected African American governor in United States history. During his administration, Wilder was praised for his sound fiscal management and his ability to balance the state budget during difficult economic times. He sponsored new construction projects at many of Virginia's colleges and universities, mental health facilities, and state parks.

After promoting the idea of a popularly elected mayor for Richmond, Wilder was overwhelmingly elected to the post in November 2004.