At the turn of the twentieth century, furniture-making became, along with textiles, one of the South's manufacturing mainstays, drawing on the region's plentiful natural resources and relatively inexpensive labor supply. Although North Carolina came to be synonymous with the furniture industry, Virginia played an important role as well. One of the Virginia concerns central to the state's emergence as a furniture center was the Lane Company, maker of the iconic Lane Cedar Chest. 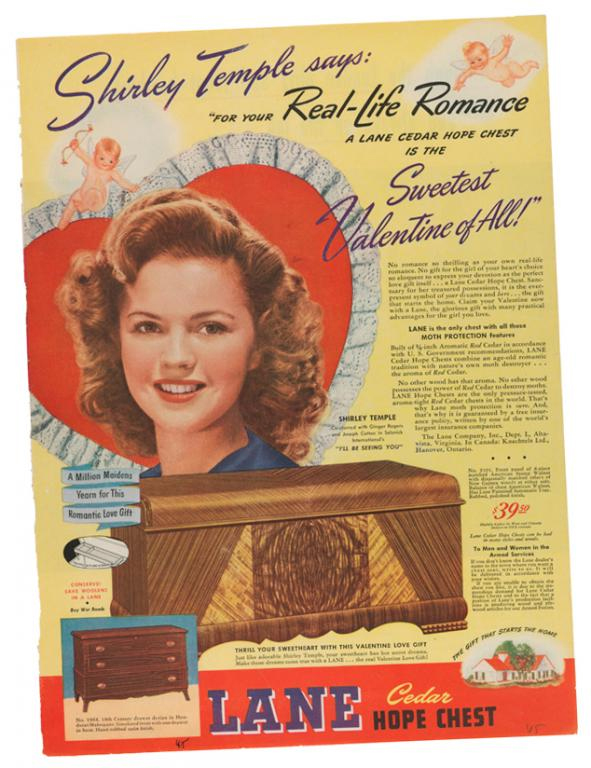 Edward Hudson Lane (1891–1973) founded the company in Altavista, Campbell County, in 1912, at a junction of the Virginian and Southern railways, which allowed for easy transportation of materials to and finished products from the factory. After struggling through the first few years of its existence, Lane's fortunes received a boost during World War I, when the company contracted with the federal government to produce pine ammunition boxes. To meet wartime demands, Lane introduced an efficient assembly system at its factory. When the plant reconverted to the peacetime production of cedar chests, workers and management were able to adopt some of the mass production methods they had learned during the war emergency. Reaching new heights of production and prosperity in the 1920s, Lane began to advertise its products nationally. These advertisements sought to equate the ideal of domesticity with a Lane "Hope Chest," in which a young woman stored clothing or home furnishings in anticipation of marriage. This was summed up in the company's tag line: "The gift that starts the home."

Lane advertisements reached a high point during World War II, persuading thousands of GIs leaving for overseas to purchase a Lane Hope Chest for the sweethearts they were leaving behind. Ads combined romantic images of men in uniform and their fiancees with patriotic slogans and the well-known face of national spokeswoman, and symbol of all things American, Shirley Temple. In the 1950s Lane added a number of new product lines to its repertoire, including television cabinets manufactured for General Electric and occasional tables. These were followed in the 1960s and 1970s by new lines of bedroom furniture and recliners.

In 1987 Interco Corporation purchased the Lane Company in a hostile takeover. After Interco's successor, Furniture Brands International, filed for bankruptcy in 1992, the Lane facility in Altavista became one of the company's divisions slated for transfer abroad. The last Lane cedar chest to be manufactured in the United States rolled off the production line in the summer of 2001, and the plant closed for good.

Families across the United States may still use or possess a antique Lane Hope Chest in their homes. Although the Virginia Museum of History & Culture does not offer appraisal services for these chests, it is possible to determine the age of a chest by reading the serial number backwards. For example, if the serial number on a chest is 553170, the production date would be 07-13-1955 or July 13th, 1955.

Would you like to learn more about Virginia businesses? Visit the Reynolds Business History Center.

This 1963 image features a couple collecting the things that make a home in their cedar chest including the wife. Cedar chests were marketed as a very important step on the way to marriage for young women. Lane produced other furniture lines including case goods, bedroom, living room, and dining room furniture. The company believed if a woman purchased or had a cedar chest purchased for her, it functioned like a gateway, and they were more likely to buy other Lane products to furnish their new home.

Lane placed their ads in publications that appealed to young women. This ad from 1964 was featured in Seventeen, Bride’s, Glamour, and Mademoiselle to name a few of the publications.

The Lane company predominately evoked images of romance and glamour in their advertising to encourage single young women and their families to purchase cedar chests. This image from the early 1930s features actress Mary Brian who was one of the first paid spokespersons Lane hired to enhance their advertising of Lane Cedar chests to young women.

Lane took a more subtle advertising approach in this 1978 add for Valentine’s Day. Romance is still a central theme, but the finding the right one and getting married message is toned down.