Let Us Commence: Graduating At A Distance 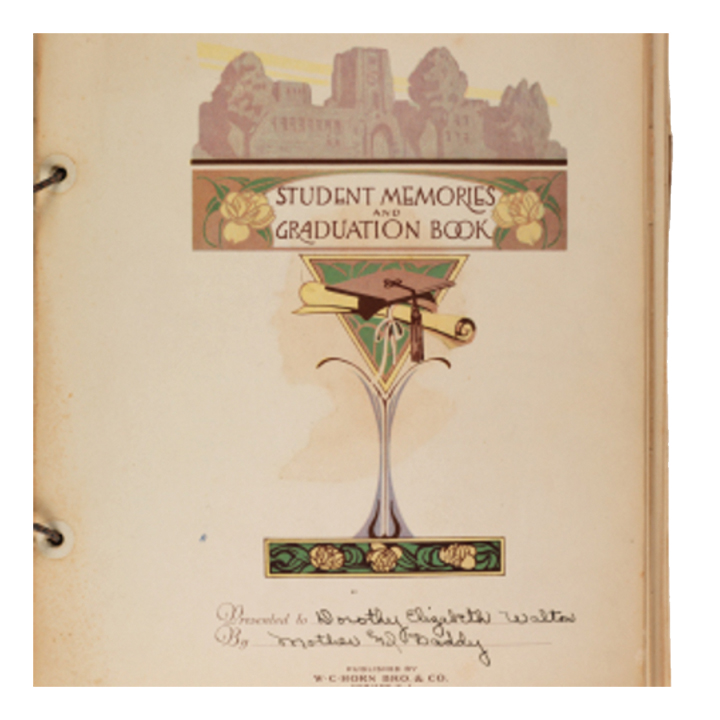 In May of each year, society has trained us to consider commencement exercises, usually in predictable ways. Lazy advertisers trot out “Pomp and Circumstance,” and caps and gowns; grads receive Hallmark cards with hackneyed advice about the thrill of “beginning your life.”

Has it always been thus? Did Socrates host a predictable shindig, way back in the day, for Plato? We’ll leave the Greeks for the classicists, but commencement exercises have a long history in North America. In Virginia, the College of William and Mary notes that the school held its first graduation ceremony in 1700. The historian John Oldmixon (1673–1742) described the scene:

“Several planters came thither in their Coaches, several in Sloops from New-York Pennsylvania, and Maryland. It being a new thing in America to hear Graduates perform their Academical Exercises, the Indians themselves had the Curiousity to come to Williamsburgh on this Occasion, and the whole Country rejoiced as if they had some Relish of Learning.” 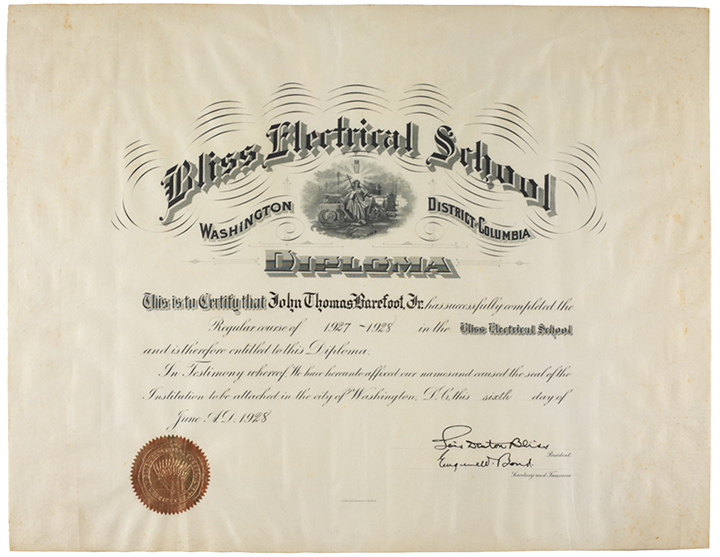 A modern observer might wonder if indigenous people perhaps experienced emotions rather more complex (and perhaps less benign) than curiosity. By 1792, William and Mary held its commencement in August, displaying a remarkably poor sense of timing given the oppressively humid summer weather in the  Tidewater region—and each of the graduating students gave speeches.

Commencement ceremonies certainly can reflect the zeitgeist. At Cornell (then) College in 1862, students debated the merits of President Abraham Lincoln’s preliminary Emancipation Proclamation, much like the rest of the country. Commencement took place in July that year at Cornell, and two students wore pins that marked them as Copperheads; that is, they were opposed to the war. Some of their pro-Union classmates took umbrage—and forcibly removed the pins. According to the historian Michael David Cohen, the “altercation ended in a lawsuit, in which the Copperheads charged their opponents with assault and inciting a riot. But the loyalists won, the court ruling that they had acted properly against disloyal Americans.” (Incidentally, Cohen’s book, Reconstructing the Campus: Higher Education and the American Civil War [2013], illuminates a fascinating dynamic of that period.) 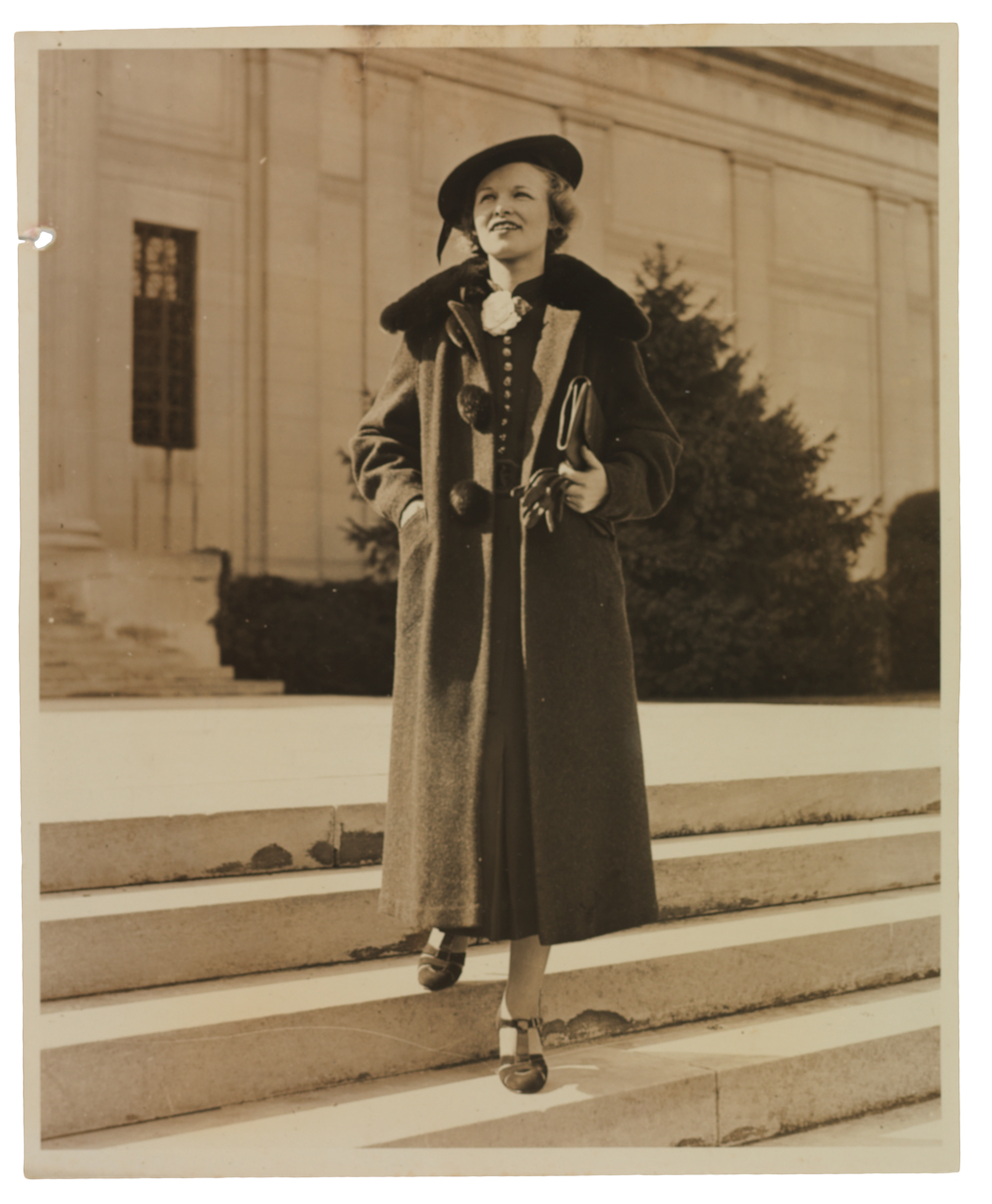 Dorothy Elizabeth Hicks (1915-2002), circa 1937. Hicks modeled this fashionable outfit in front of “Battle Abbey,” the colloquial moniker for the building which then housed the Confederate Memorial Association. By 1946 the Confederate Memorial Association was subsumed by the Virginia Historical Society; the society moved its headquarters to Battle Abbey in 1959. A photograph of Hicks (then “Miss Dorothy Walton”) similar to this one appeared in a local newspaper; both of these images are found in her scrapbook. (VMHC Mss5:7 H5292:1)

Despite the end of the war, commencement ceremonies still could serve as an arena that reflected sectional differences. Ralph Waldo Emerson visited the University of Virginia in 1876, near the end of his illustrious career. Three students invited him to speak at a joint session of the Washington and Jefferson Literary Societies, which was held the day before the university’s graduation ceremony. Emerson accepted. He had vehemently opposed slavery before the Civil War, but Charles W. Wilson, in writing about the event, noted that “Emerson began to think that this visit could be, potentially, a symbolic gesture of reconciliation.” That gesture, however, proved elusive. The professor who hosted Emerson showed the philosopher his portrait of Robert E. Lee; the frame featured an image of the Confederate battle flag. Emerson’s daughter, who accompanied him to Virginia, recalled that “Father was as silent as I” as their host discussed “the chivalrous character and exploits of the Confederate Generals, and the brutal conduct of the Union Army.”

For the most part, of course, commencements are festive occasions. In the 1910s, the Medical College of Virginia (now part of Virginia Commonwealth University) held commencement exercises that spanned three days. One of the evening events in 1913 was an “Adjunct Faculty Smoker,” which was followed the next night by the finale in the form of a formal banquet—beginning at 10:00 p.m.—at the Commonwealth Club. 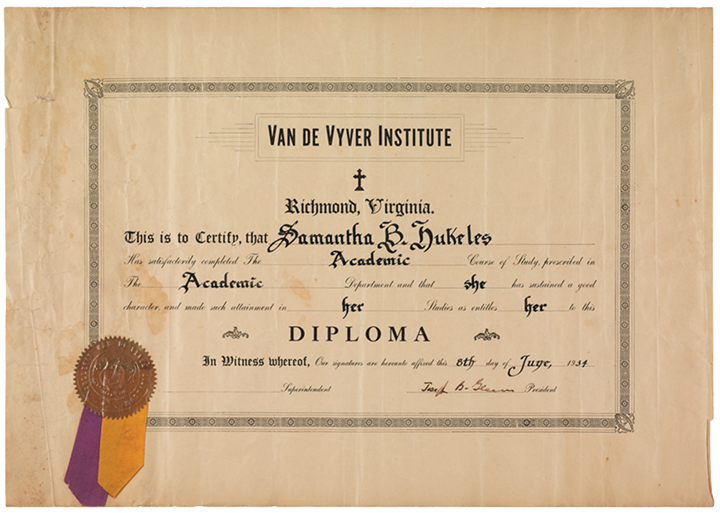 The predominantly African American Van De Vyver Institute was originally begun as a school attached to St. Joseph’s Catholic Church in Richmond's Jackson Ward; the school offered both academic and vocational courses. Founded in 1885, St. Joseph’s was the first Catholic institution for African Americans in the South. The school was begun a few years later; it was renamed the Van De Vyver Institute in 1910, in honor of Augustine Van de Vyver (1844–1911), who served as the bishop of the Diocese of Richmond from 1889 to 1911. The school operated under that name until 1969, when it was closed. In 1934 it put on a play as part of its commencement activities. Samantha Hukeless played “Henrietta Darby, the Widow” in the three-act comedy, And Home Came Ted, by Walter Ben Hare. Hukeless, later married to James Roots, worked for many years as a clerical assistant and teacher’s aide at several Richmond middle and high schools. 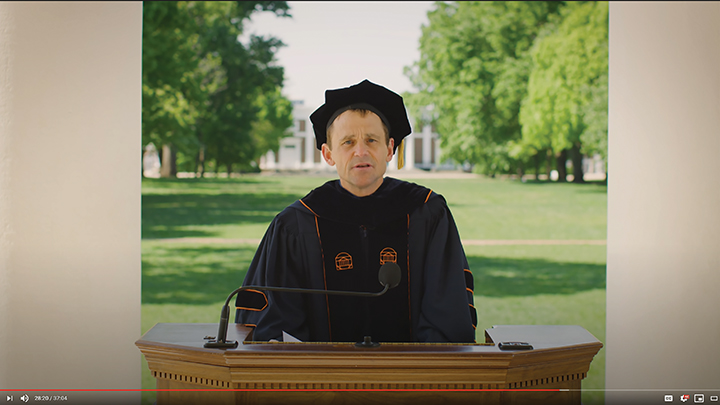 UVA President Jim Ryan speaks to graduates in a YouTube stream of the 2020 UVA Virtual Commencement (Image courtesy of UVA).

In the spring of 2020, marking the milestone of successful matriculation posed new challenges. Many colleges—including the University of Virginia and Norfolk State University—planned online events to celebrate graduation, with plans to hold live, on-site ceremonies in the fall. Most Virginia high schools announced they would host virtual commencements, in light of state directives restricting public gatherings due to the COVID-19 pandemic. Still, some school districts paused their planning in hopes that live events would be possible later in the summer. Regardless of the format, 2020’s graduations undoubtedly were memorable.

So, if you attended a commencement ceremony you can rest assured that you have participated in a long tradition—whether you've done so on a football field, or sitting on your sofa with a laptop. And if the time has dragged a bit at the ceremony, just imagine what Socrates would do.

This article was written by John McClure, while Director of Research and Publications at the VMHC, for Virginia History & Culture Magazine, Spring/Summer 2020.