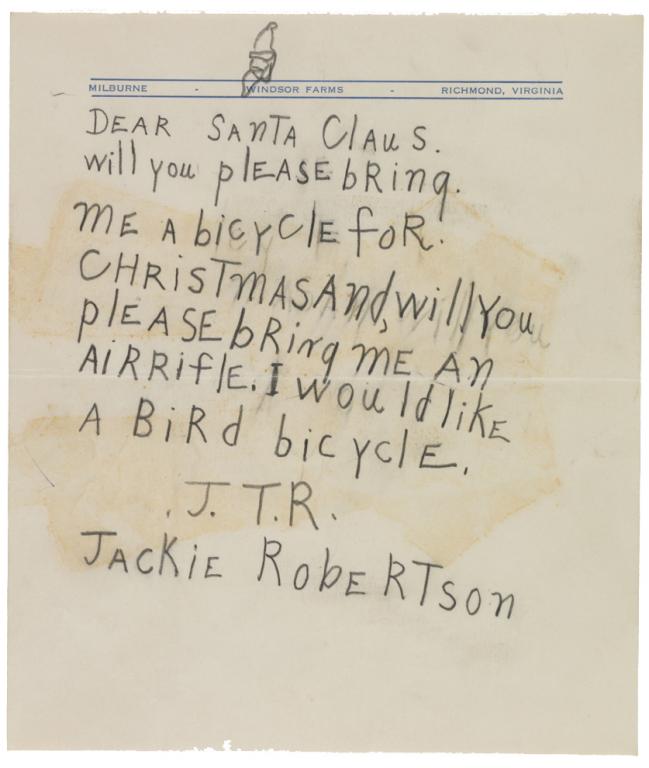 Perhaps you've seen A Christmas Story and remember Ralphie, a young boy in the 1940s, who asks for a BB gun for Christmas but is told by his parents, "You'll shoot your eye out, kid."

Within a collection of Robertson family papers is a letter to Santa written by a boy named Jackie, presumably Ralphie’s age, requesting Santa to bring him a Bird bicycle and an air rifle. And just so Santa would know what kind of rifle Jackie wanted, he enclosed a picture of a Red Ryder BB gun. The letter also includes a heartwarming drawing of Santa’s head in profile at the top of the page. If only we knew if Jackie received his coveted Red Ryder BB gun!

See examples of other letters to Santa in the VMHC Collections below. 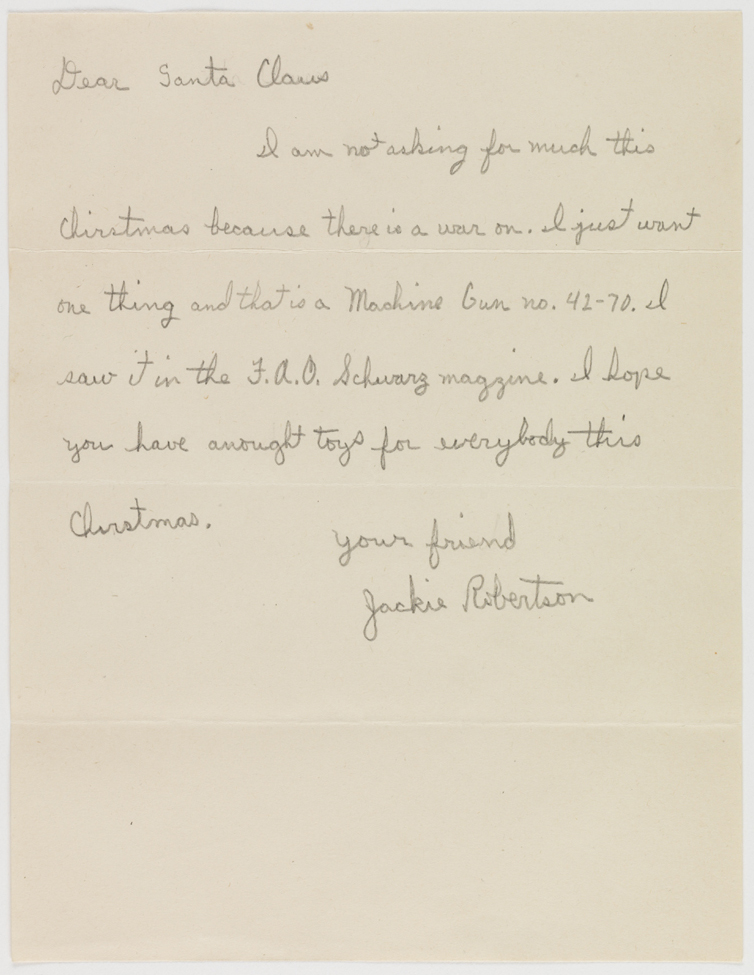 Jackie Robertson’s second letter to Santa
In a later letter to Santa, Jackie acknowledges "the war," and to ease Santa's burden, he is only requesting one thing–a Machine Gun no. 42–70, which he saw in the FAO Schwarz catalog. He ends his letter with one hope, that Santa has “anought toys for everybody this Christmas." (VHS call number: Mss1 R5495 b 6809–6813)
Image 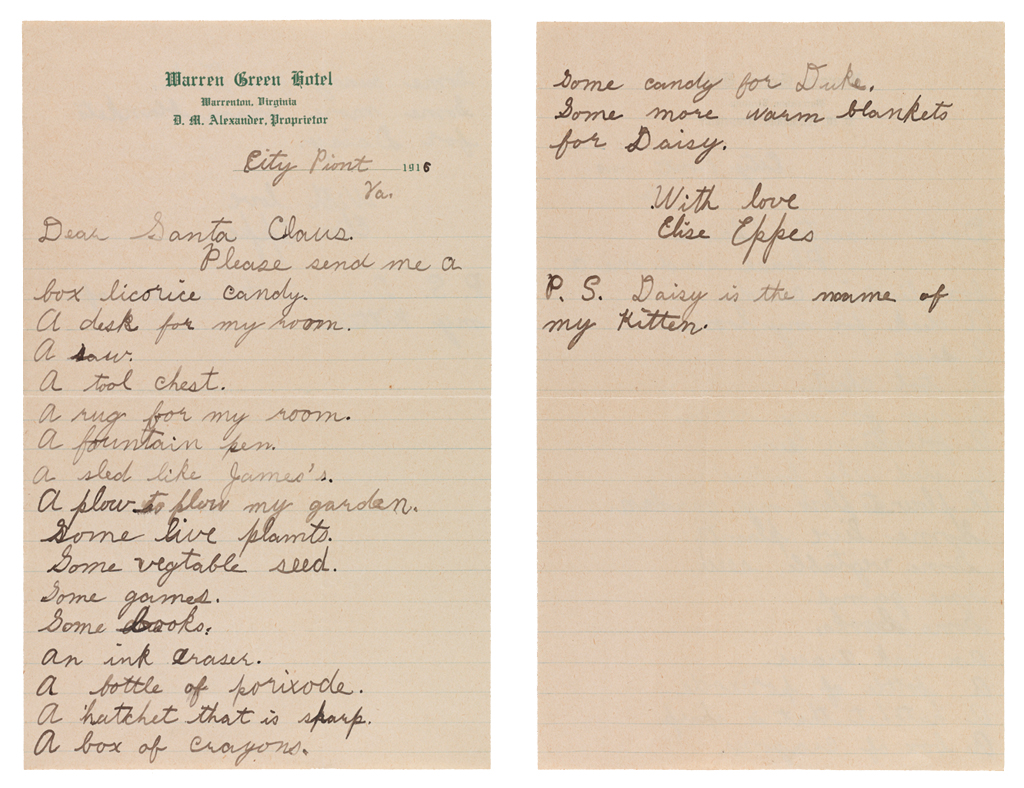 Elise Eppes’s letter to Santa, 1916
Our earliest letter to Santa was written in City Point, Virginia, in 1916. Elise Eppes lists a number of items for Santa to bring. Her list provides us insight on how she spent her day. Elise seems to have enjoyed gardening. She asks for a plow, live plants, and some vegetable seeds. From her requests for a saw, a tool chest, and a sharp hatchet, I get the sense that Elise liked to make things. Although she wrote this letter to Santa nearly a century ago, some of the items are similar to those written today, including requests for crayons, games, and books. (VHS call number: Mss1 Ep734 d 487)
Image 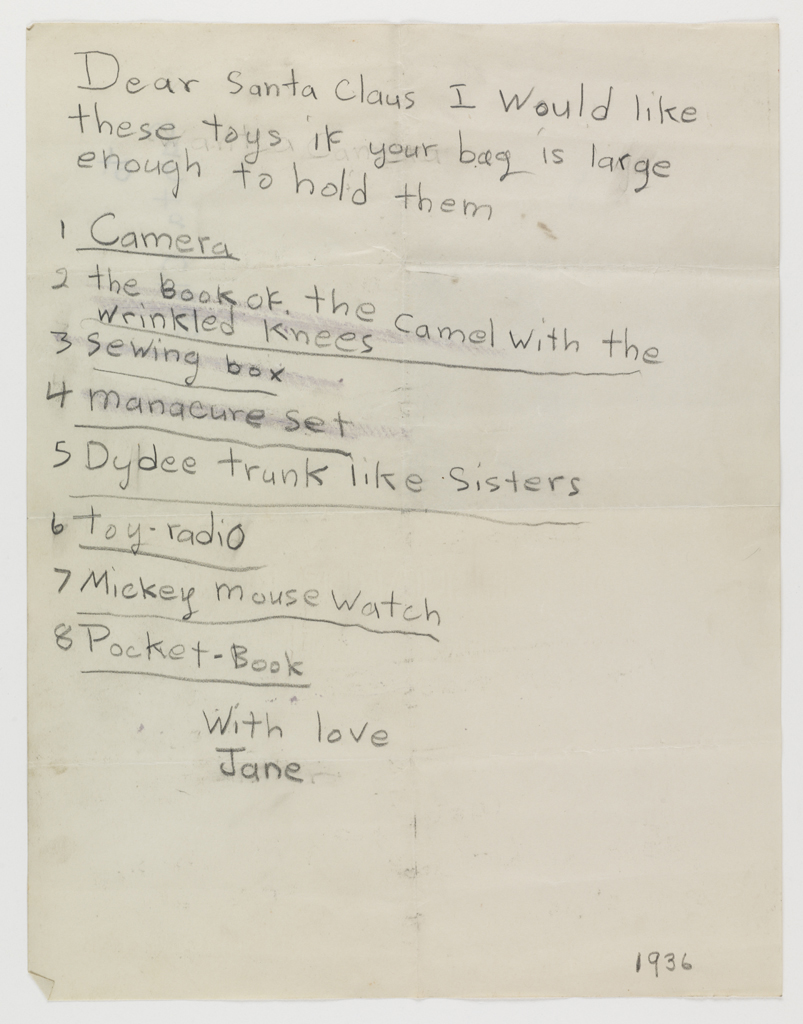 Jane Cecil’s letter to Santa, 1936
In a 1936 letter to Santa, Jane Cecil asks for items representing some of the fads and trends of the 1930s that have continued to the present day. Among the items on her list are the book The Camel with the Wrinkled Knees (featuring Raggedy Ann and Andy), a camera, a Mickey Mouse watch, and a toy radio. Perhaps with the exception of Raggedy Ann and Andy, these items are still on many a child’s wish list. (VHS call number: Mss1 C2597 b 1015)