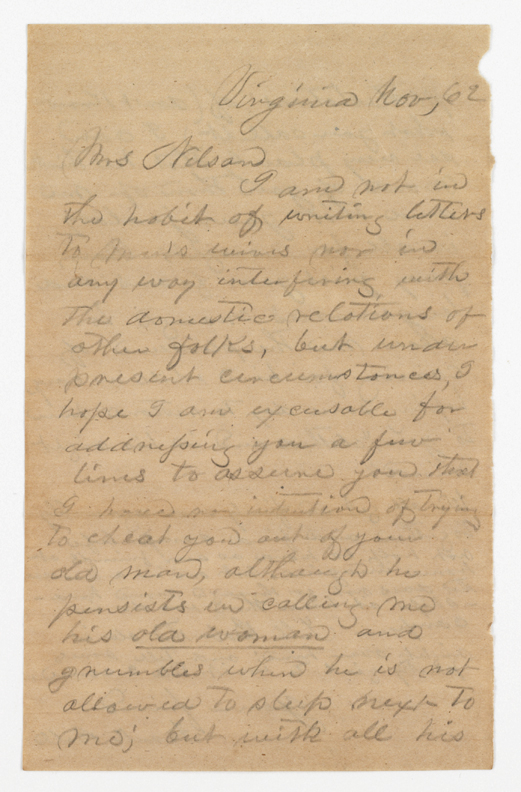 Though it has torn many asunder, war has also brought people together. Take, for instance, two members of Company D of the 57th North Carolina Infantry. This regiment was formed in Forsyth County, North Carolina, on July 4, 1862. Benjamin Franklin “Frank” Bell of Stanly County was twenty-one and enlisted as a private. William T. Nelson of Forsyth County was thirty-one and joined as a corporal. By November 1862 the men were in Virginia, moving between Fredericksburg and Richmond, hoping they would soon be settling in winter quarters. From the references William makes in his letters to his wife, Ann T. (Crawley) Nelson, it’s obvious that he and Frank were sharing quarters. In his letter of November 17, William mentions that Frank is also writing a note to Ann; here is a transcription of the first of the two surviving letters he wrote to her:

I am not in the habit of writing letters to men’s wives nor in any way interfering with the domestic relations of other folks, but under present circumstances, I hope I am excusable for addressing you a few lines to assure you that I have no intention of trying to cheat you out of your old man, although he persists in calling me his old woman and grumbles when he is not allowed to sleep next to me; but with all his protestations of (don’t know what you call it) I can see very plainly that he thinks more of you than of me and that your jealosy is all for naught; Now pray quiet your fears, and be generous enough to allow me the pleasure of caring for him while in camp, hoping some day to restore him to you, “clothed and in his right mind.” 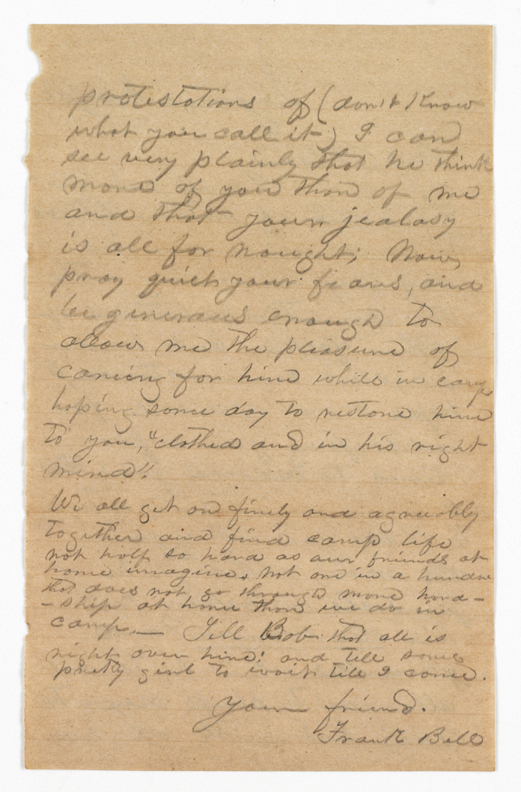 By mid-December Frank had evidently received a response from Ann, which, unfortunately, did not survive. But we can get the gist of her message by reading between the lines of Frank’s next letter:

I never was lawyer enough to make a good plea in a bad cause and now that I see I will be beaten, I plead guilty and will hereafter call him our old man; though a partnership business seldom works well, and in this case will no doubt end in a row.

….Hoping you will be content with a half interest in our old man and trust the rest to me, to good luck and Providence (for certainly all of us will bring things out right in the end).

I will close, so no more from your friend “til deth”

Shortly after this letter was written, William, who had been injured, was granted a furlough. Upon his return to his regiment, he was no doubt disappointed to discover that Frank had been detailed to work with the Pioneer Corps.

Both Frank and William survived the war. William was captured near Farmville, Virginia, in early April 1865. By April 14, he was in Newport News, Virginia, where he took the oath of allegiance on June 26 and was released. He and his wife appear in Forsyth County in the census for the next two decades, until Ann died in 1886. They had one son, born in 1858, who lived for only a few months.

Frank was captured near Frederick, Maryland, in July 1864, and spent a short time in the Old Capitol Prison in Washington, D.C., until he was transferred to Elmira, New York. He took the oath of allegiance on June 29, 1865, and was released. After the war he returned to Stanly County, where, in 1866, he married Frances Ann Miller. They had six children, all of whom survived to adulthood. Frances died in 1917 and Frank in 1919. Both are buried in the Stony Hill United Methodist Church Cemetery.

There’s another interesting bit of history connected to these letters: They survived Hurricane Katrina! The donor, Mrs. Frances W. Crawley, was living in Waveland, Mississippi, when the hurricane struck. Her home was destroyed, and the trunk containing the letters was one of the few items her family salvaged. The trunk remained unopened for many months, and when it was finally cleared out, the letters were still water-logged. The paper is fragile and the writing somewhat faded, but the letters, and the humorous sentiments they contain, have survived.

This article was written by Eileen Parris while serving as an Archivist at the Virginia Museum of History & Culture.