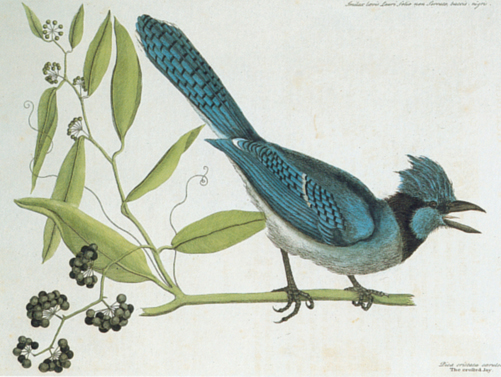 The Blew Jay (Blue Jay) from The Natural History of Carolina, Florida, and the Bahama Islands (VMHC QH41.C292.1754.Rare)

The first accounts of the strange flora and fauna of the New World created a great demand among European scientists for more detailed information. In 1712 a young English naturalist named Mark Catesby sailed to Virginia to visit his sister in Williamsburg. For the next seven years, Catesby traveled throughout the colony, observing the natural resources and gathering plant samples and "many birds, shells, snakes and other specimens" to send back home. When he returned to England, he caught the attention of William Sherard, one of the leading botanists of the day. Sherard and a group of "curious friends" sponsored Catesby's second trip to America in 1722 to collect more samples and to make the first extensive drawings of American nature.

When he returned home, Catesby began work on producing prints of his watercolor drawings, resulting in the publication of his life's work, The Natural History of Carolina, Florida, and the Bahama Islands. This monumental two-volume set is considered to be one of the most important achievements of eighteenth-century natural science. Although he was not a trained artist, his drawings and descriptions, especially of birds, were so detailed and vibrant that today he is known as "the founder of American ornithology."

Catesby spent some twenty years on The Natural History project until his death in 1749. He was a pioneer in the field of scientific illustration, and his work was known in America and Europe, but his books were not a commercial success. His reputation has grown in recent years, and today the engravings are highly prized by collectors. The original watercolors are in the Royal Library at Windsor Castle where they have been since George III purchased them in 1768. 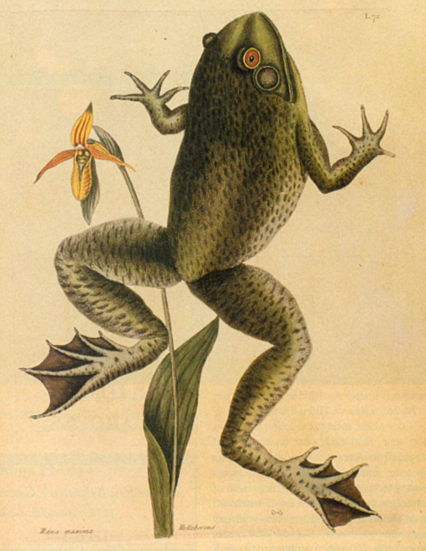 Bull Frog (Rana Catesbeiana) from The Natural History of Carolina, Florida, and the Bahama Island
Although Catesby's bird drawings are generally considered his best, this painting of a bullfrog almost leaps off the page. "The noise they make has caused their name," Catesby wrote, "for at a few yards distance their bellowing sounds very much like that of a bull a quarter of a mile off…when surprised with a long leap or two enter the mouth of the spring where they are secure. It is the general belief of the people in Virginia that they keep the springs clean and purify the water, wherefore they never kill or molest them." (VHS call number: Rare Books QH41 C292 1754 o.s.)
Image 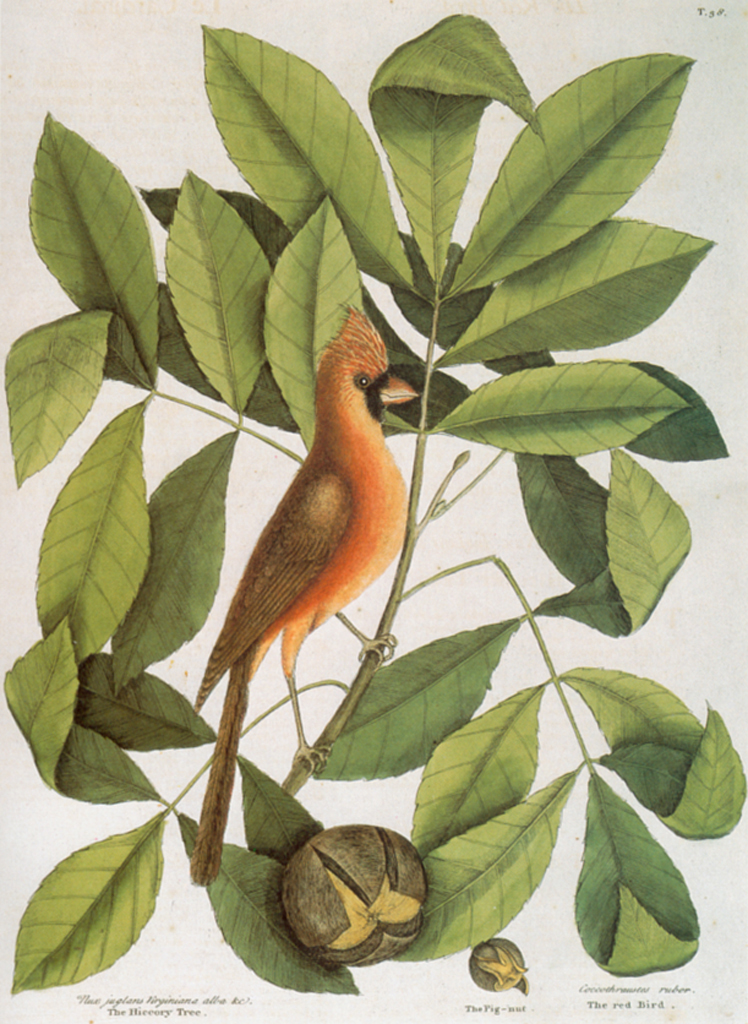 The Red Bird (Northern Cardinal) from The Natural History of Carolina, Florida, and the Bahama Island
Catesby's description of the cardinal includes the "towering crest, the mask across the face, and the strong beak." He observed that "they are seldom seen above three or four together. It is a hardy and familiar bird. They are frequently brought from Virginia and other parts of North America for their beauty and agreeable singing, they having some notes not unlike our nightingale." This jaunty-looking bird is the official state bird of seven states (Illinois, Indiana, Kentucky, North Carolina, Ohio, Virginia, and West Virginia). (VHS call number: Rare Books QH41 C292 1754 o.s.)
Image 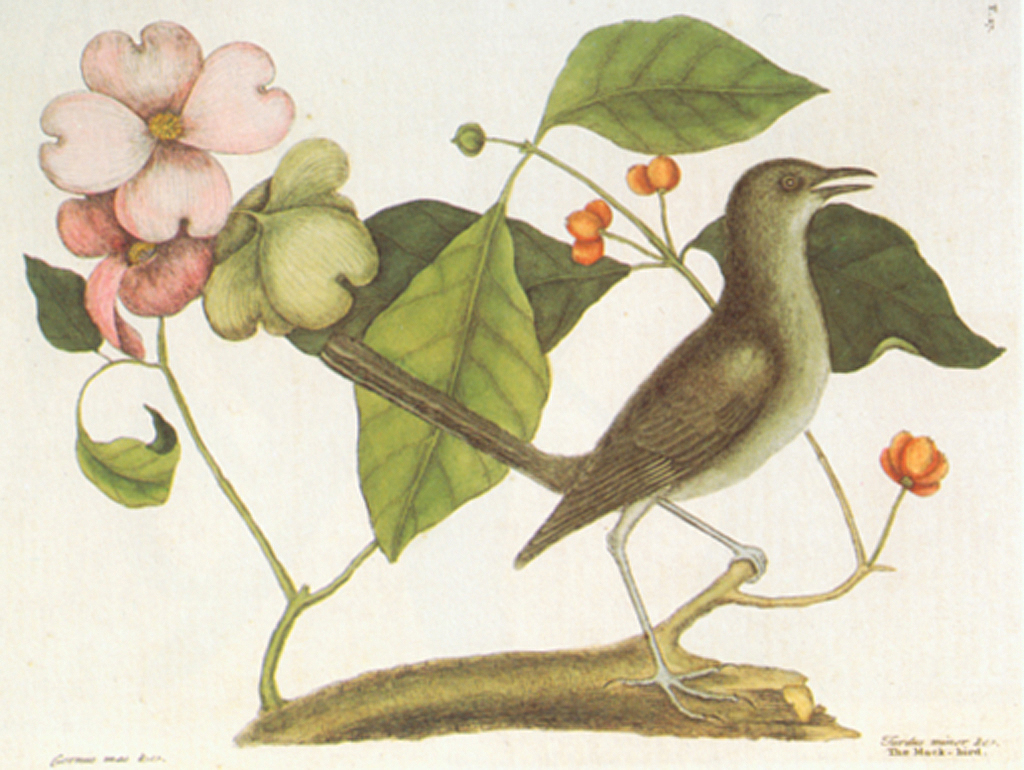 Mock-Bird and Dogwood from The Natural History of Carolina, Florida, and the Bahama Island
Catesby described the mockingbird as "The Queen of all singing birds," and wrote that "They often sit upon our chimneys in summer and sing the whole evening and most part of the night." He observed "mockingbirds and other kinds of thrushes" feeding on the red berries of the dogwood, pictured here in the pink form. "In Virginia I found one of these dogwood trees with flowers of a rose color, which was luckily blown down, and many of its branches had taken root, which I transplanted into a garden." (VHS call number: Rare Books QH41 C292 1754 o.s.)
Image 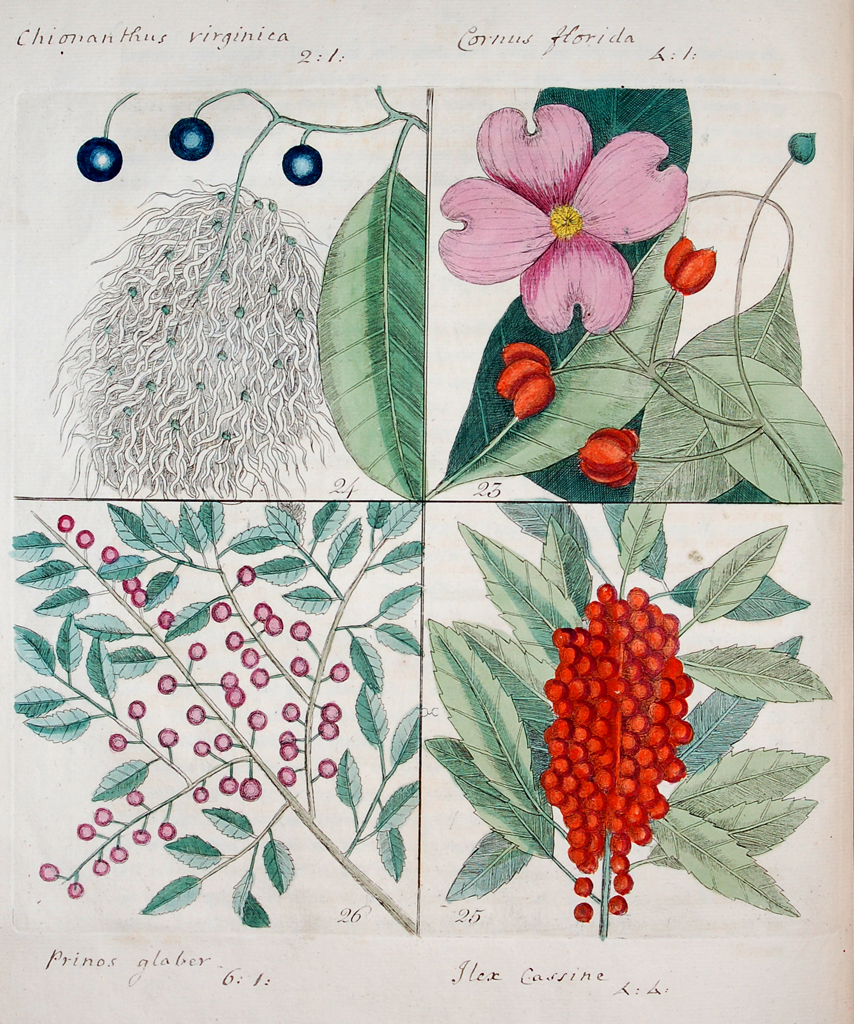 Cassena vera Floridanorum (The Yapon) from Hortus Europae Americanus
During his time in the field, Catesby often depended on the hospitality of local Indians for food and protection. He described their customs, such as this passage about the yapon tree: "The esteem the American Indians have for this shrub, from the great use they make of it, renders it most worthy notice: they say its virtues have been known amongst them from the earliest times; they prepare the leaves for keeping by drying, or rather parching them in a pottage-pot over a slow fire…they drink large quantities, both for health and pleasure; they say it restores lost appetite, strengthens the stomach, and confirms their health, giving them agility, and courage in war. In Virginia it is known by the name of Yapon." Catesby transplanted dozens of American specimens to England, and the results were published after his death in Hortus Europae Americanus. (VHS call number: Rare Books QK481 C36 o.s.)