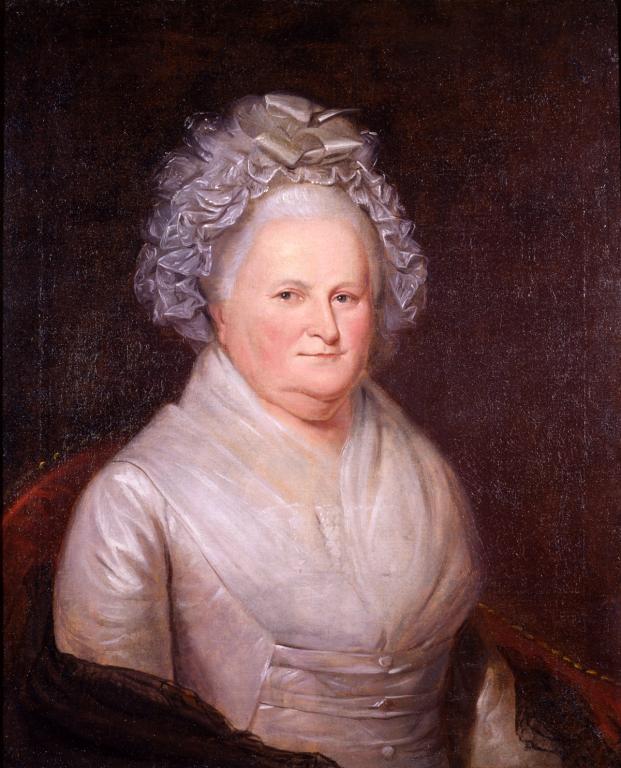 This portrait of Martha Washington (1731–1802) is the work of Charles Willson Peale, who also painted the sitter several times earlier. But those canvases do not survive. Thus she often is remembered by the image displayed here, rendered in 1795. Martha Washington then was age 64, the wife of the President, and near the end of her life. We do not see the vivacious young woman whom George Washington married and John Wollaston painted forty years earlier.

According to one account, Charles Willson Peale met President Washington at the market in Philadelphia and remarked to him that he had just seen Mrs. Washington, who looked so well that her portrait must again be painted. This image resulted from that conversation. The glow that animates her face is the focus of this painting, not the sitter's short stature or rotundity that less observant contemporaries saw as predominant features of her appearance.

Martha Dandridge was born in New Kent County on June 13, 1731. At age 18 she had married a wealthy heir of the region, Daniel Parke Custis. Soon she was busy as a mother caring for the couple's four children, two of whom died in infancy. At her husband's death eight years into their marriage, Martha Custis was suddenly an eligible young heiress. At age 27 she selected George Washington from a host of suitors.

George and Martha indulged her two young children—and after their premature deaths, two of her grandchildren–in lieu of the Washington offspring they never would produce.

George Washington's social ascent was not only financed with her Custis fortune, but also took place with Martha by his side. She even wintered with him at Valley Forge. She was everywhere accepted as the respected wife of the renowned general and President.