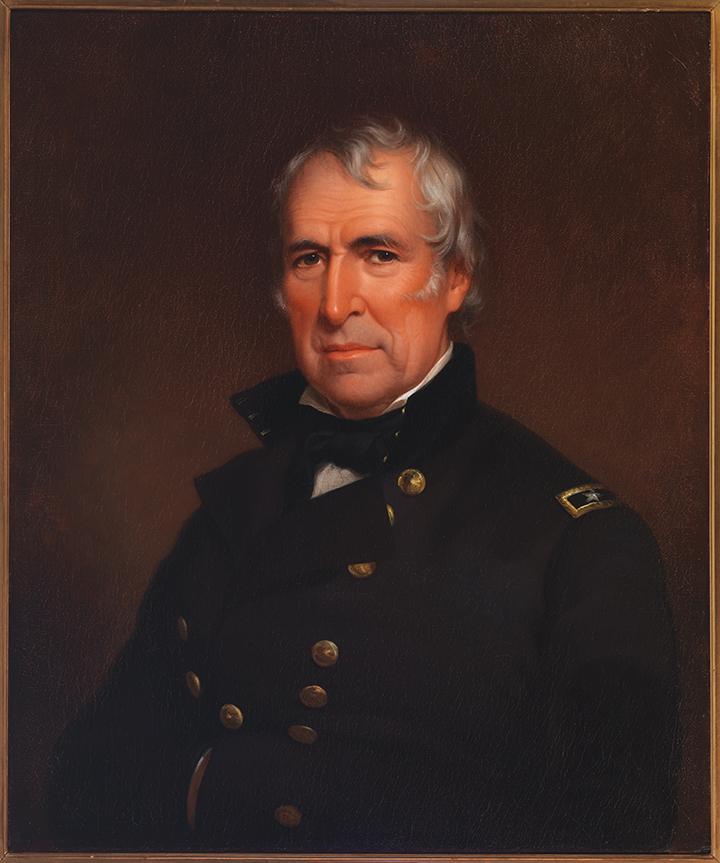 Portrait of Sam Houston by Charles D. Fredricks & Co., about 1855–60. From the Collections of the CMLS managed by the VMHC.

Of the five Americans who were most involved in the War with Mexico, four were Virginians. They were politicians and generals.

Those generals were manipulated by a fifth major figure involved in the war, Tyler’s successor, James K. Polk, the Democrat president from Tennessee. Polk feared that if either general became too popular, that soldier would be chosen as the Whig candidate for president in 1848 and win the election. Such an overreach failed in 1848. Scott won the war, but Taylor won both the Whig nomination and the presidency. 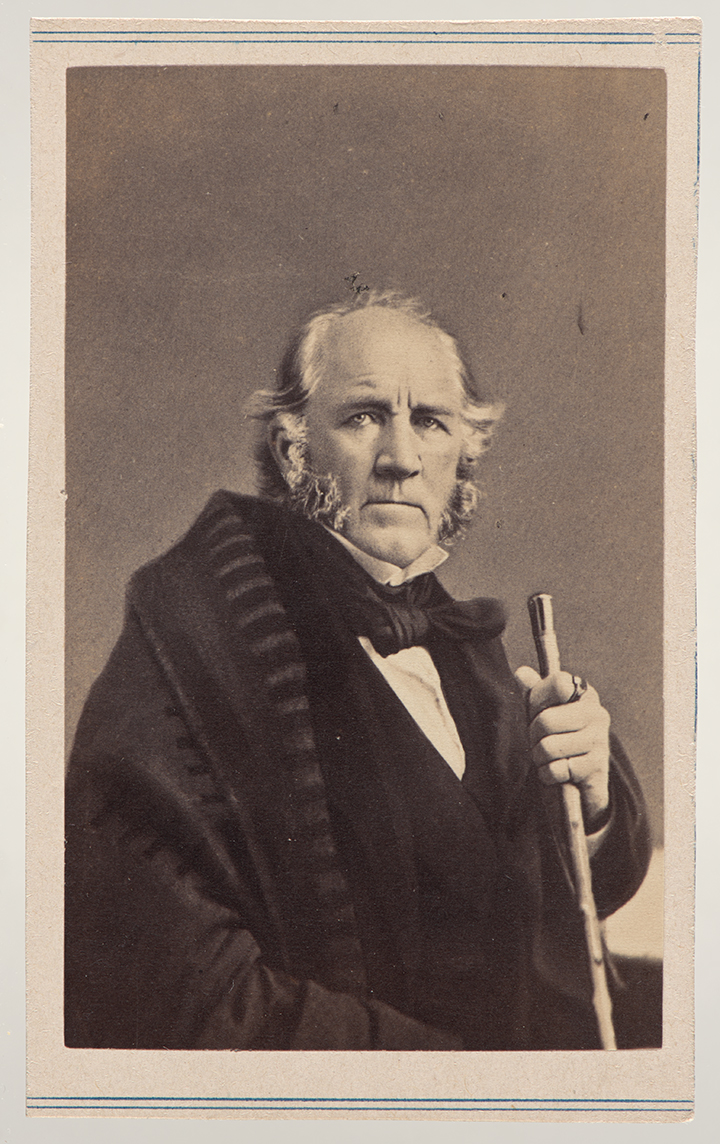 The term “Manifest Destiny,” coined in 1845, suggested to many advocates that the United States would inevitably expand to engulf the entire continent; that growth was “manifest” or obvious. Texas came to the forefront of their thinking. Great stretches of land in Texas and northern Mexico were home to Comanches, Apaches, Kiowas, Navajo, and other tribes who sought to repel Mexican incursions and exercise the right to occupy their lands. To Tyler, Texas needed to be annexed by the United States to bring order there from the chaos. Some in America, however, saw the move as simply an exercise to extend slavery into the West. Tyler, after all, was a slaveholder, as were Houston, Polk, and Taylor.

As a state claimed by the republic of Mexico, Texas was vast in size, but so sparsely populated that many Americans felt free to colonize—they discounted, the longstanding occupation of Native tribes. New American settlers soon outnumbered Mexicans four to one. They planted cotton, introduced slavery, and set up their own independent government, with Sam Houston as its president. When he offered Texas to the United States, President John Tyler signed an annexation bill three days before he left office. President James K. Polk, an advocate for Manifest Destiny, eagerly continued the process. 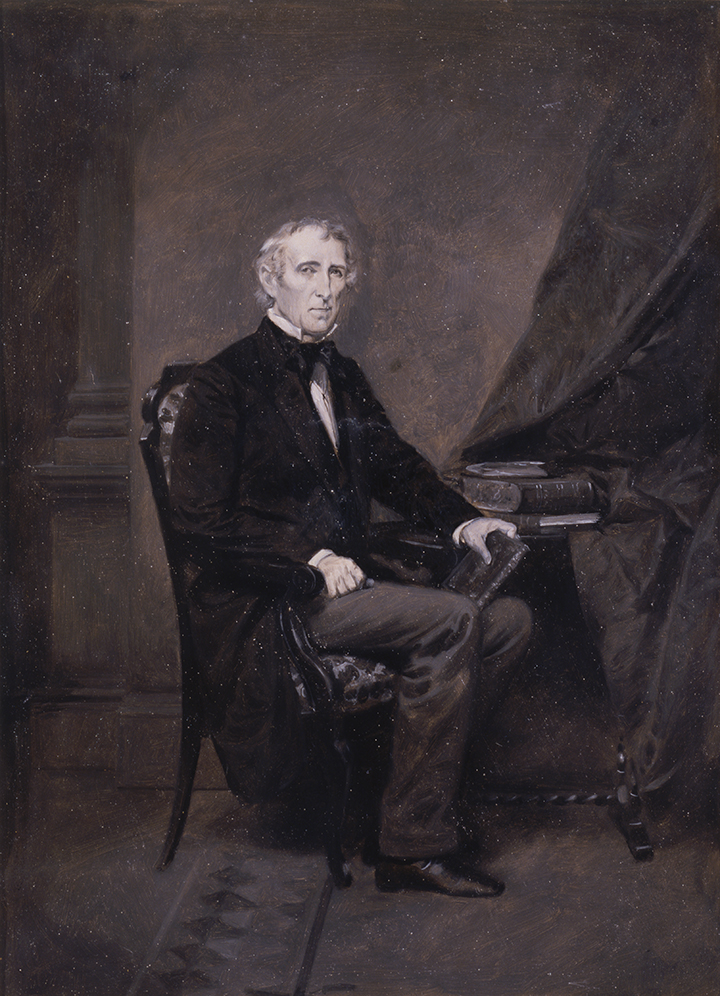 Portrait of Zachary Taylor by James Lambdin,1848. On loan from The Honorable Helen Marie Taylor Collection.

John Tyler’s father had been a college roommate of Thomas Jefferson, whom the son emulated. President Tyler saw the annexation of Texas as territorial expansion on the scale of Jefferson’s Louisiana Purchase. In a letter in the VMHC collection (to John Young Mason, December 11, 1848), Tyler explained that his “whole cabinet … concurred in the necessity of action” regarding the annexation of Texas—as if cabinet support was enough. Tyler’s war had immediate implications for the Comanches, Kiowas, Navajos, and Apaches who became entrapped by it and pushed aside. The war eventually resulted in the acquisition of land encompassing modern-day Texas, New Mexico, Arizona, Nevada, Utah, California, and part of Colorado. The future of the innumerable American Indians living in those regions was forever altered for the worse.

In September 1845, Polk ordered an infantry regiment to Corpus Christi, with the experienced Zachary Taylor, “Old Rough and Ready,” in command. What few Mexican forces were then in Texas were too occupied with independent Indian tribes to respond to Polk’s action. In May 1846, near Palo Alto, eight miles north of the Rio Grande River, a Mexican force did appear, and the war began. Its attack against Taylor’s horse-drawn artillery, used for the first time in North America, was futile; the American guns decimated the enemy. Five months later, in northern Mexico, Taylor began a siege of Monterey, followed by attacks that brought street fighting. Taylor could only negotiate a truce. He was at a stalemate. He had won victories but had failed to coerce Mexico into surrendering Texas. 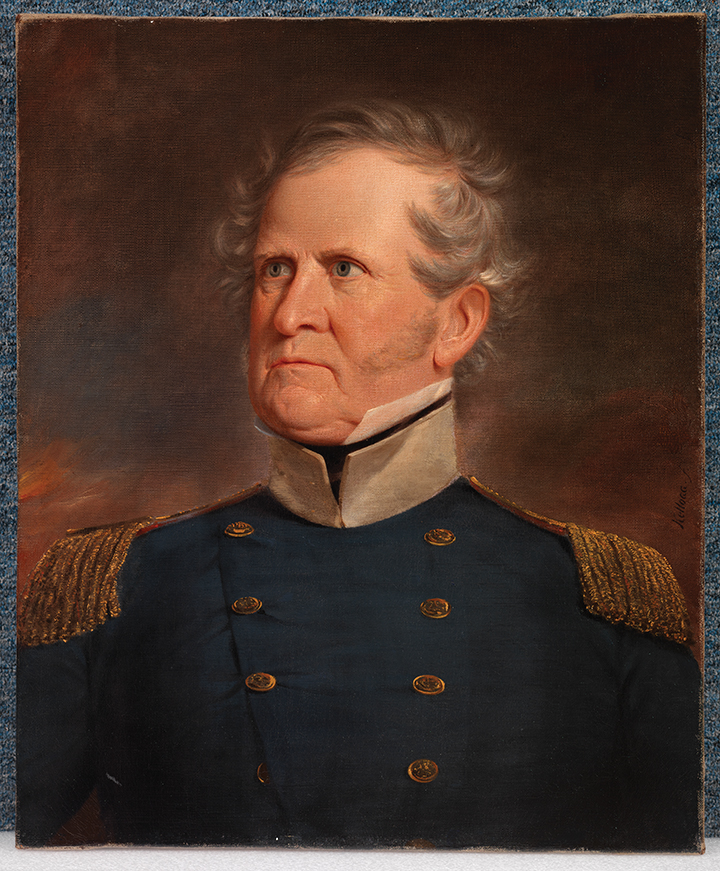 Portrait of Winfield Scott by Miner Kellogg, about 1851. Purchased with funds provided by Mr. and Mrs. Woodbury S. Ober.

Taylor had done well enough for newspapers in the East to suggest that he become the Whig candidate in 1848. Polk acted. Some believe Polk’s motivation was to cripple Taylor and the Whig party; others believe he simply wanted a quick victory. Ulysses Grant, who served in the thick of the campaigns of both Taylor and Winfield Scott, and who wrote a lengthy account in his Memoirs, believed that Polk had given command to Taylor simply to keep it from Scott, also a Whig, who seemed to have greater political aspirations. Polk was reluctant to remove the victorious Taylor from the field. But he could insert the equally experienced Scott in command above Taylor. Polk had initially intended to fight only in northern Mexico but now chose to endorse Scott’s plan to open an eastern front at Vera Cruz and march inland to the nation’s capital. Scott was popular and well known for his military discipline and insistence on flamboyant appearance that earned him the nickname “Old Fuss and Feathers.” According to Grant, Democrats in Washington hoped that Scott would steal the spotlight from Taylor. But in February 1847, before Scott began his campaign, Taylor, still in the north of Mexico, defeated the general Santa Anna at Buena Vista.

Scott bombarded Vera Cruz, using the heavy guns of his fleet, and took the walled city unopposed. He was determined to force a showdown with Santa Anna, even though he was outnumbered three to one. Scott would rely on his knowledge of how to maneuver an army. He had literally written the book on tactics. 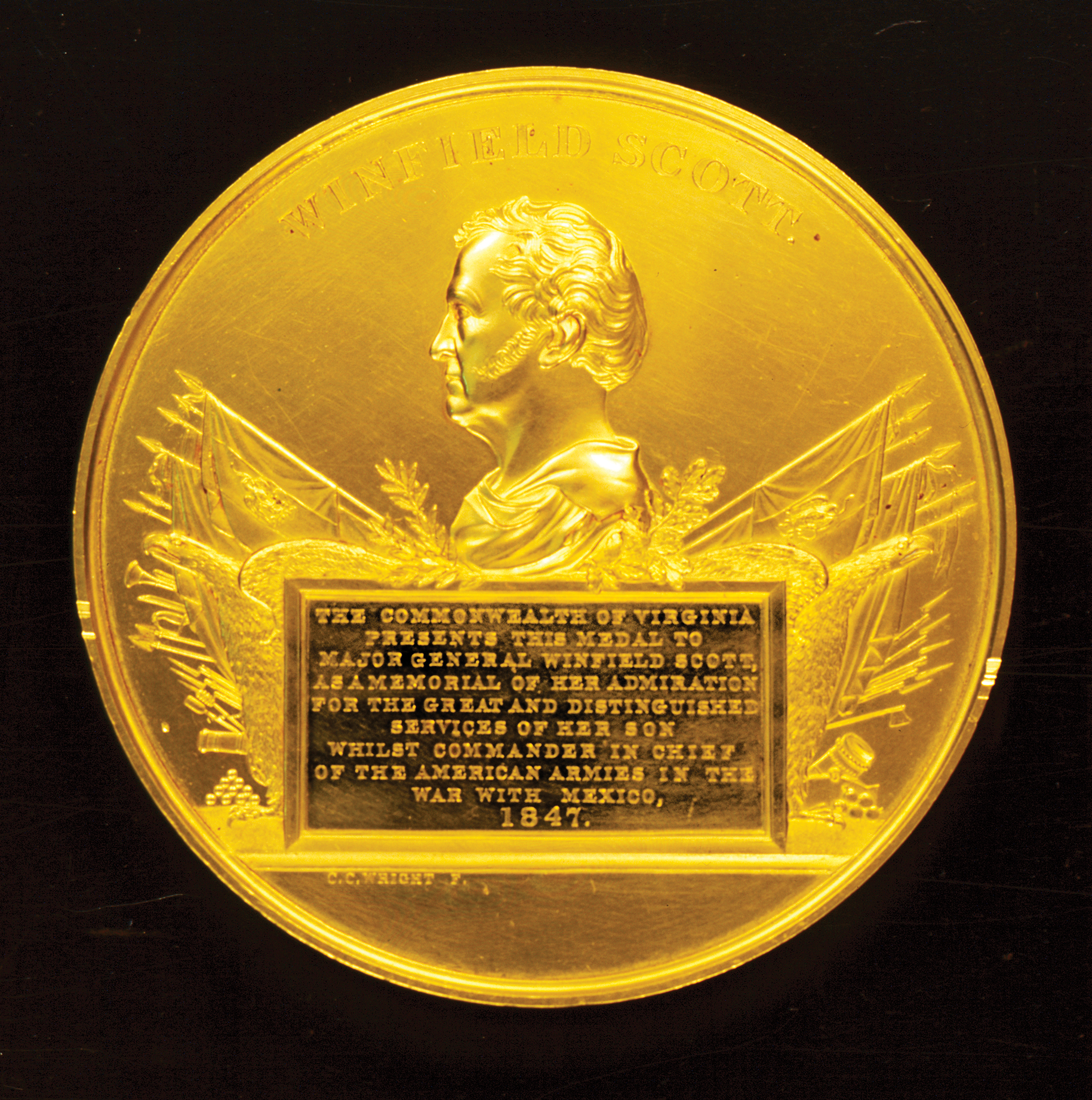 Gold Medal presented by Commonwealth of Virginia to honor Winfield Scott for victories in the Mexican War, 1847. Gift of the Estate of Virginia Scott Hoyt.

Santa Anna chose to challenge Scott at a high mountain range fifty miles west of Vera Cruz, a formidable position from which to defend. Scott’s engineers, however, led by another Virginian, Robert E. Lee, found a way to outflank the enemy and win an overwhelming victory at Cerro Gordo. They defeated the same Mexican army that had lost to Zachary Taylor at Buena Vista and had rushed a thousand miles to Cerro Gordo, only to be beaten again. With the arrival of reinforcements, in August 1847, Scott proceeded toward Mexico City. Lee literally guided Scott’s army as it won victories at the towns of Padierna and Contreras, and notably at Churubusco, where the enemy was surprised and quickly routed. Next came a victory at the fortress of Chapultepec. Lee was among the first Americans to arrive unopposed in the grand plaza of Mexico City when the U.S. flag was raised over the imperial palace. Scott and his staff appeared soon after, in full dress uniform. Dissention within the American army followed the fall of the Mexican regime. Several generals held political aspirations. Gideon Pillow and William Worth both criticized Scott in American newspapers. He was exonerated, but Polk removed him from command. The bickering played to attentive audiences in Washington, where the Democratic administration delighted in the opportunity to discredit Scott. It would be Taylor who would rise to the surface and be elected president in 1848.