New Normals for the Old Dominion

Today women outnumber men at most colleges across the country, but higher education for women was not always a reality. By the mid-nineteenth century, the wealthiest Virginian women had several opportunities for a degree, through schools like Hollins, Randolph-Macon Women’s College, and by 1901, Sweet Briar, but these were private and costly to attend. At the turn of the century, women received an alternative. When the State Female Normal School in Farmville opened in 1884, it was Virginia’s first public institution of higher education for women.

The State Normal Schools for Women, so called because they set the norms (or standards) for teaching, were born out of a Reconstruction-era focus on public education. Virginia was creating more and more public schools across the state with a demand for trained, capable teachers to lead them. In 1902, the General Assembly passed a resolution to create additional normals to support the school system. After six years of legislative sparring, two schools were founded in Harrisonburg and Fredericksburg, joining the normal in Farmville. In 1910, the fourth was added in Radford.

Both Farmville and Fredericksburg had rifle or hunting clubs for women to learn or improve shooting skills. (“The Virginian,”1913 Farmville yearbook, VMHC LB 1972 L6 1913, p. 146)

The state normal schools were strategically placed throughout Virginia so as to cover each of the major geographical regions. Women tended to take advantage of the college closest to home: Fredericksburg typically attracted students from the east coast, Farmville and Radford from the south and west, and Harrisonburg from the Valley. For the Fredericksburg normal, 61% of students enrolled in 1915 came from within 50 miles and nearly 20% were local.

The state normals were much more accessible than other women’s colleges, with affordable tuition and all fees waved for students who agreed to teach in Virginia public schools upon graduation. Of course, they were still not accessible to a large percentage of teachers in the state: the normals were, like all education in Virginia, racially segregated.

The option was popular. In the pilot year, Harrisonburg and Fredericksburg both received more applicants than they could accommodate. By the 1918-1919 academic year, the schools had a total of 1,470 students attending.

As part of their training, women student-taught in public schools. Here, a Farmville senior teaches at the grade school operated by the normal. (“Book of Views,” Radford, 1916, VMHC LB1972 .R3 B7)

Coursework at the state normals both challenged and supported traditional roles for women. From their founding, the schools accepted the changing face of womanhood. A 1903 General Assembly report on the normal schools acknowledged, “Man is no longer the sole breadwinner, nor is woman any longer the non-productive, petted, and idealized idol of chivalry.” Women participated in competitive athletics, learned practical skills like woodworking and basic mechanics, and above all received the professional training for a career in teaching. Fredericksburg even supported a rifle club, which proclaimed in the 1914 yearbook, “There is no reason why a girl should not shoot as well as a boy.”

The state normal schools advocated for higher standards of teaching paired with higher salaries for teachers and trained women to be “leaders of thought in their communities.” In doing so, they helped elevate an acceptable women’s role to a respected professional field and allowed many women to pursue careers and independence.

However, it would be a stretch to say the normals were socially progressive. In the early 20th century, teaching was considered an appropriate sphere for women, as an extension of the home, and many courses focused on homemaking skills like sewing, cooking, and childcare. A 1915 bulletin of the Fredericksburg school clearly stated the school’s dual purposes:

“Utmost in the thought of this school will be the conception that the young women within its walls should be trained, not merely to occupy the best positions as teachers, but also to occupy…their natural positions in the home.”

The normals sought to thoroughly prepare women to be both teachers and wives and mothers. Though they stressed professionalism, they did not emphasize career at the expense of familial duty. To this end, high standards were kept for social behavior, with curfews and standards for dress strictly enforced. The Harrisonburg application put it clearly: “The flapper type, lacking in seriousness of purpose, not desired.” 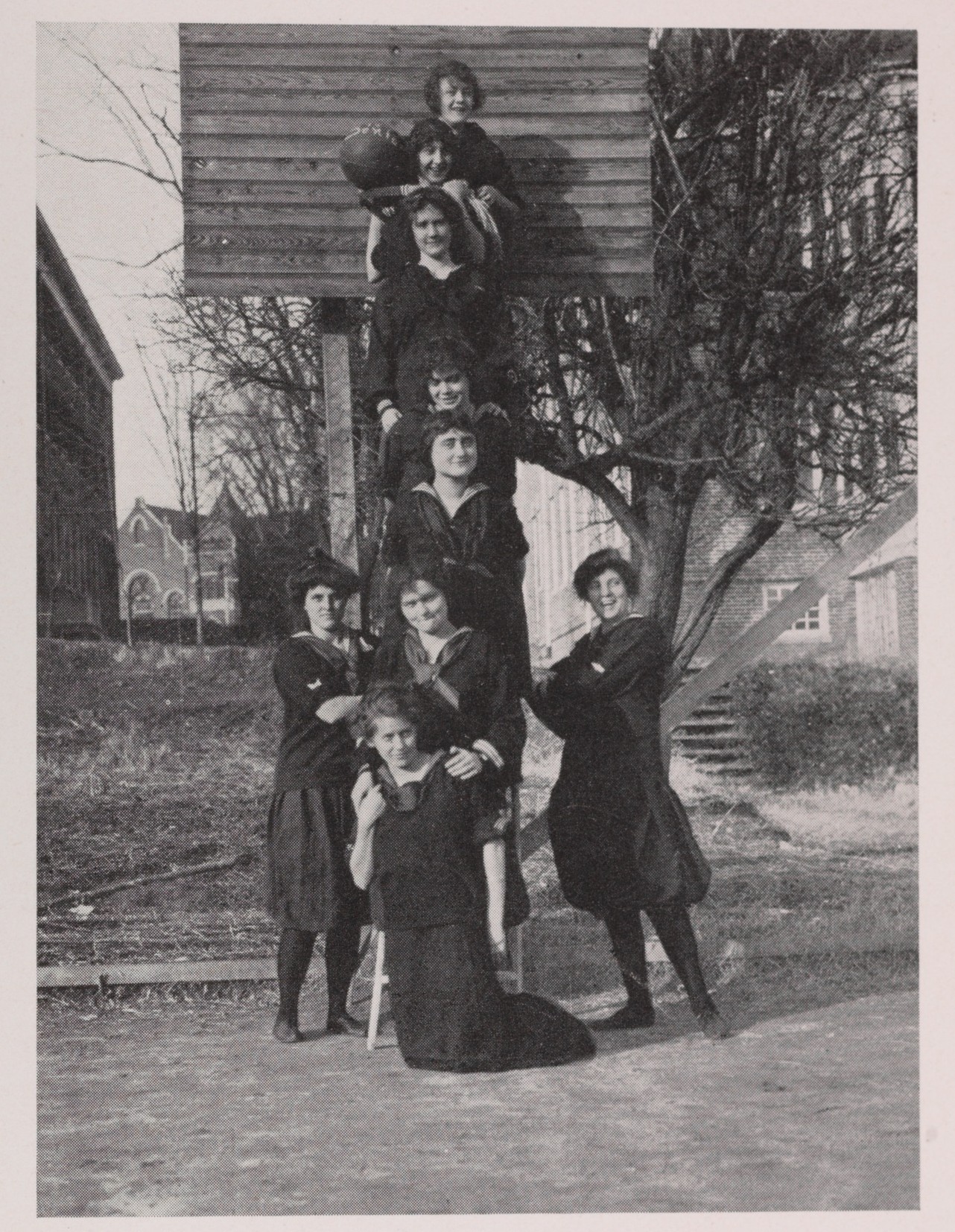 The young women who attended these schools lived in this duality, as both aspiring professionals and aspiring homemakers. In yearbooks and memoirs, women looked back fondly on their time at the normals. Despite the rules, they enjoyed socializing in town and participating in clubs and athletics on campus. Basketball was especially popular- each school had several teams.

In the 1915 Harrisonburg yearbook, “The Schoolma’am,” seniors prophesized where their fellow classmates would be after graduation. Many were destined for marriage to ambassadors, football players, and “6 foot 2 farmers.” But others (lightheartedly) foresaw bolder paths: “the first of Virginia’s daughters to take up law,” a platform speaker for woman’s rights, sideshow performer for Barnum and Bailey, and secretary to the first woman president of the United States – this before women could vote! In the end, however, most students accomplished what they came to the normal school to do: By 1919, 82% of graduates from the Fredericksburg school were teaching. 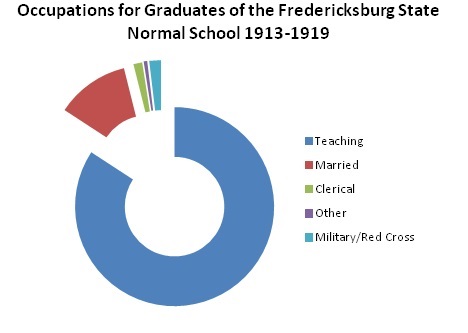 The 1919 Fredericksburg yearbook followed up with graduates to see where classmates landed. It is unclear whether students listed as married were also working outside the home. (Data from Alvey’s “History of Mary Washington College,” VMHC LD 7251 M222 A55)

The normal schools at Farmville, Fredericksburg, Harrisonburg, and Radford hint at early 20th century tension between tradition and progress. Racially segregated, strictly supervised, and emphasizing duties to the home, the schools advocated established social roles. But for many of the thousands of women who attended, they also presented an opportunity for higher education, independence, and a professional career, and facilitated a first glimpse of more radical concepts like women’s suffrage.

You may have guessed by their locations: today, the former normal schools continue to advance education in Virginia as James Madison University, Longwood University, Radford University, and the University of Mary Washington.

The Virginia Museum of History and Culture has a wealth of resources from the State Normal Schools for women, including yearbooks, academic catalogs, student newspapers, viewbooks, and school histories. Many of the materials are quite entertaining, and are sure to be of special interest to alumni.

This article was written by Candice Roland when serving as a library clerk at the Virginia Museum of History and Culture.

Image
Photograph of a Dorm

Dorms were built to the highest contemporary standards. A “dorm mother” lived in each to enforce rules and provide comfort and guidance. Students continue to live in many of these original dorms today. (Fredericksburg bulletin, 1915, LD7251 .M225 B82)

Report cards were sent quarterly. During the early years of the normals, reports were mailed to parents, then signed and returned to the school. (Mss1 H7185 b 11,735-11,736)

Henrietta C. MacKan’s diploma from the Farmville Normal School (Mss1 M1915a) MacKan also had a high school diploma, though some students started coursework at the normal prior to completing secondary coursework.

Marian Chalkley was the sole member of the Industrial Arts class at the Harrisonburg school in 1915. Though other paths of study were offered, the vast majority of students pursued teaching. (“The Schoolma’am,” 1916 Harrisonburg yearbook, LB1972 .H42 S3)

Image
Application to the Harrisonburg Normal

The application to the Harrisonburg normal is vastly different from college applications today. Normal school applications asked for at least some high school coursework and a statement of good character. (Harrisonburg bulletin, LB 1972 H42 B8, v. 1 no. 1)