The Resurrection of Henry "Box" Brown 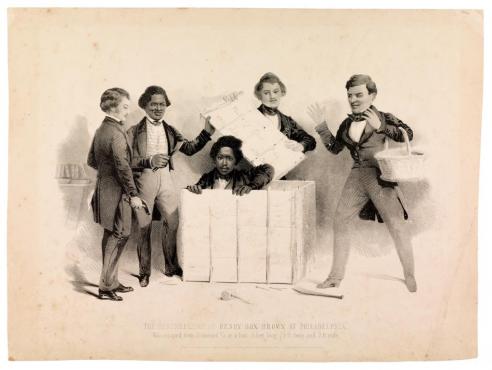 One of the memorable escapes from slavery was that of Henry Brown of Richmond in 1849. Brown had himself shipped to freedom in a crate as railroad freight. To celebrate his safe arrival, he adopted the name Henry Box Brown. This rare lithograph titled The Resurrection of Henry Box Brown at Philadelphia shows the moment that the box was opened and Brown emerged. Once free, Brown appeared at abolitionist events and collaborated on a slave narrative. Using profits from the book, Brown produced a moving panorama depicting slavery. Exhibiting the panorama helped lead Brown into a career of public performance.

This print by Samuel Rowse was issued in 1850 in Boston to help raise funds for the panorama. The VHS print is one of only a few known originals. Brown’s portrait is from life, and many other likenesses of him were based directly or indirectly on it. An inscription on the back of the print, "From Samuel May, 1889," probably refers to one of the two Samuels Mays who knew Brown. The Rev. Samuel J. May was a Unitarian minister who met Brown soon after his arrival in Philadelphia, and his nephew, Samuel May, Jr., was an agent for the Massachusetts Anti-Slavery Society who announced Brown's identity to the public.