Richmond in the Midst of the Civil War 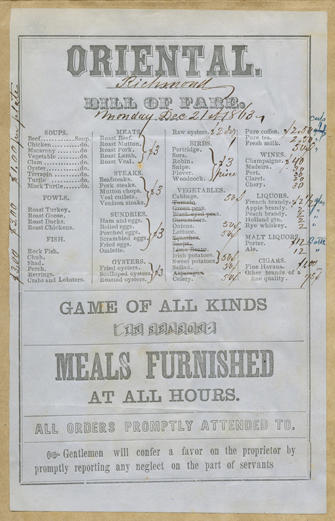 In the earliest days of the Civil War, few expected the conflict to endure for four long years. As the Confederate capital, Richmond experienced waves of change that saw the city lurch from the untidy influx of thousands of military personnel and government officials in 1861 to the fiery evacuation of the city by Confederate forces in 1865. In that time, Richmond residents struggled with many challenges: the frequent threat of invasion; the onslaught of thousands of dead and wounded Southerners from nearby battlefields; the presence of hordes of rowdy soldiers, sutlers, and prostitutes, and hundreds of Union prisoners; and the departure of self-emancipated African Americans. Ernest B. Furgurson, in his book Ashes of Glory: Richmond at War (New York, 1996), maintains that "Richmond was by far the most expensive, corrupt, overcrowded, and crime-ridden city in the Confederacy" (page 191).

In this chaotic environment, adequate food supply for the dramatically enlarged population came to be a major challenge. Early in the war, Richmond's well-established and fluid markets kept pace with the growing demand. Howard's Grove hospital, on Mechanicsville Turnpike just outside of Richmond, employed a "traveling agent" responsible for procuring food and supplies on a daily basis. An 1862 menu from "Mississippi Hospital No. 7," a component of the large complex at Howard's Grove, offers a variety of vegetables and "fricassee"—including mutton chops, quail, and venison. Doctors could restrict their patients to a "Full," "Half," or "Light Diet."

As the war dragged on, however, supplies dwindled sharply and prices rose dramatically. While the Confederate government struggled to maintain a stable currency, inflation steadily took its toll and forced officials to set limits on the prices that merchants were allowed to charge their customers. Retailers frequently ignored the government edicts, however, and failed to calm the financial chaos. The official limit for "superfine" flour, for example, increased from $25 per barrel in January 1864 to $150 six months later. Levin Smith Joynes (1819–1881), a physician in Richmond, kept a scrapbook in Richmond that detailed the precarious economy. By January 1865, Dr. Joynes noted that he paid one dollar for a three-and-a-half-ounce "loaf" of bread.

At the war's end, Richmond's population experienced another transformation when departing southern troops and Confederate officials were replaced by arriving Union army personnel, northern missionaries, and recently freed African Americans. In the immediate postwar period, many residents still suffered from food shortages. Over the period of one week in April 1865, Federal officials distributed some 86,000 rations to needy Richmonders. Gradually, normal agricultural and market activities resumed, but the dire situation in Richmond brought on by the Civil War would haunt those who lived through it. 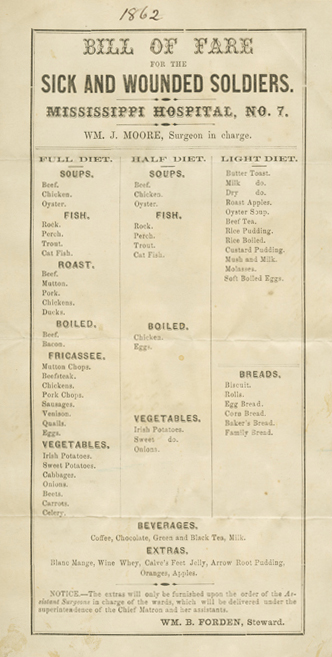 "Bill of Fare," Mississippi Hospital No. 7, Howard's Grove Hospital
Levin Smith Joynes (1819–1881) was a physician from the Eastern Shore who lived in Richmond for many years. He taught at the Medical College of Virginia and eventually became dean of the faculty. The hospital menu, from 1862, reflects the relative abundance of foodstuffs. (VHS call number: Mss1 J8586 b 225 [p.5])
Image 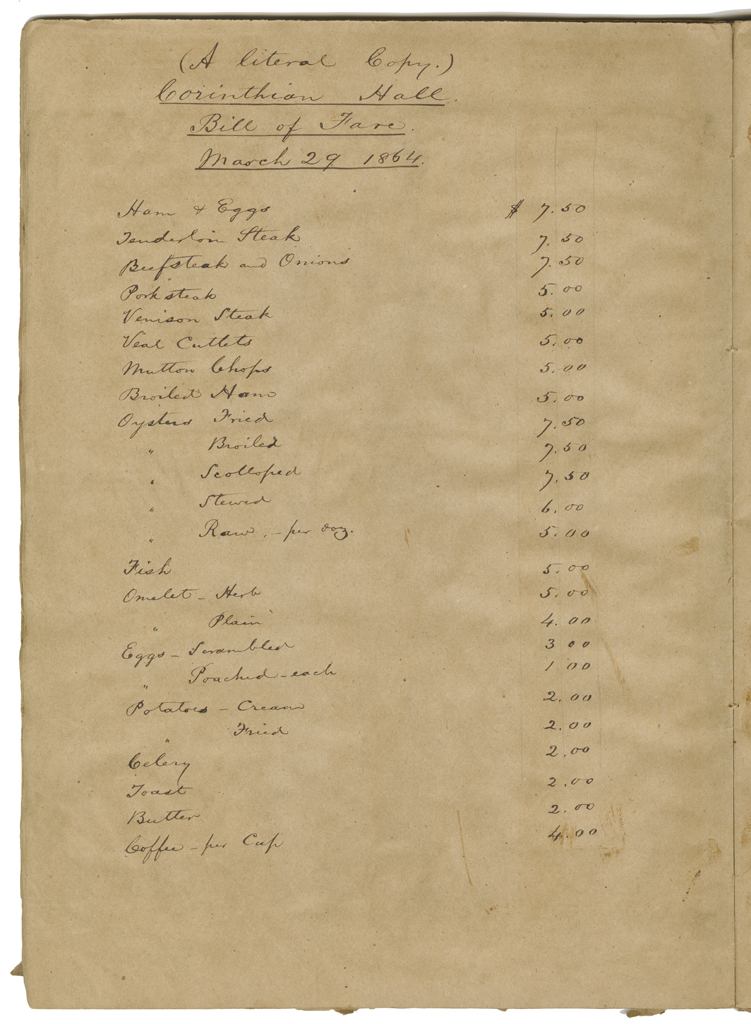 "A Literal Copy" of Corinthian Hall Bill of Fare
By March 1864 restaurants' menu prices had risen exponentially. The Corinthian Hall, located on Main Street, charged $7.50 for ham and eggs and $4.00 for a plain omelet. Restaurateurs, for their part, likely made little profit, given that flour went for as much as $500 per barrel, bacon could fetch $9 per pound, and black-eyed peas cost in the neighborhood of $60 per bushel. (VHS call number: Mss1 J8586 b 225 [p.13, verso])
Image

"Special Orders No. 163," Richmond, 1864, in Levin Joynes scrapbook
Levin Joynes meticulously tracked prices in the Richmond markets, which tended to fluctuate dramatically with the battlefield fortunes of the Southern army. Joynes noted on his copy of the official price schedule the words "advance" and "retreat", which referred to the progress of the Union army in the early stages of its campaign in the Shenandoah Valley in the summer of 1864. (VHS call number: Mss1 J8586 b 225 [p.24])
Image 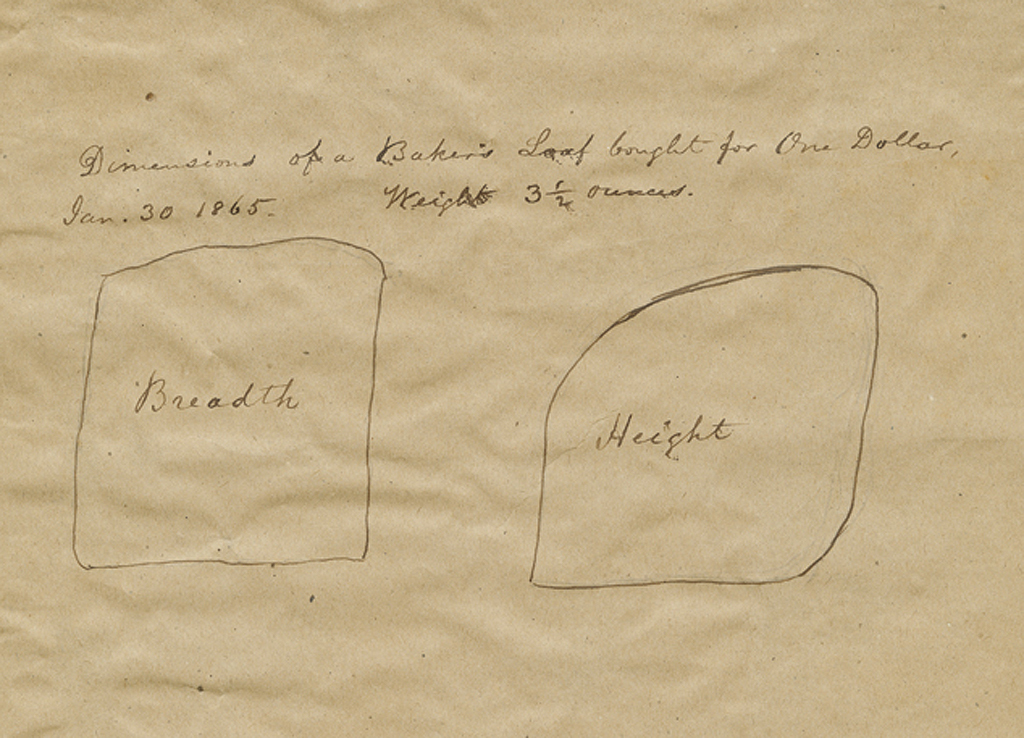 "Dimensions of a Baker's Loaf . . . Jan. 30 1865" in Levin Joynes scrapbook
Levin Joynes's depiction—presumably in actual size—of a "Baker's Loaf" of bread speaks volumes about the dire straits facing Richmonders in January 1865. The loaf weighed just three and a half ounces. Joynes bemoaned Richmond prices in letters to relatives, and he took measures to avoid inflation in the city. Writing to his sister in December of 1862, Joynes described "having undertaken, for the first time, to cure our own bacon. Nine hogs constitute the amount of our sacrifice . . . . I have grave fears lest our first attempt may prove unsuccessful, and failure in these times would be a serious matter—seeing that nine hogs . . . cost $420" (quotation from Levin Smith Joynes, Joynes family papers, Section 7, Mss1 J8586 b 120–141). (VHS call number: Mss1 J8586 b 225 [p.27, verso])