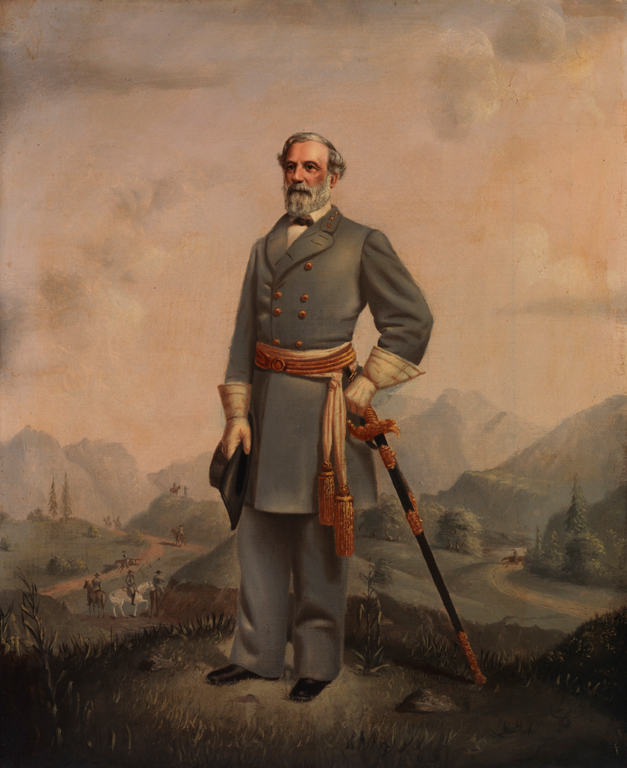 Robert Edward Lee (1807–1870) was born at Stratford in Westmoreland County, Virginia, in 1807, the son of Revolutionary War general Light Horse Harry Lee. Before the Civil War, few men could match Lee's record of achievement in the army. Graduating without a single demerit and second in his class from West Point in 1829, he served for several years with distinction as a military engineer, steadily rising in rank and reputation.

During the Mexican War, his extraordinary bravery and ability won him the lasting confidence of fellow Virginian and American commander, General Winfield Scott. Later, Lee was appointed superintendent of West Point; then he returned to line duty with the 2nd U.S. Cavalry on the West Texas frontier. Early in 1861, he was recalled to Washington by General Scott.

Politically a moderate, strongly attached to the Union, and with no special sympathy for the institution of slavery, Lee watched with growing anxiety as the lower South seceded from the Union and formed the Confederate States of America. When Virginia left the Union, Lee made the most difficult decision of his life. His old friend and mentor General Scott offered him principal command of the United States Army. But Lee maintained his conscience would not allow him to bear arms against his native Virginia. He submitted his resignation and traveled to Richmond where he was named commander-in-chief of the military and naval forces of Virginia. Soon he was commissioned as a general in the Confederate army. Probably, he is the only man in history offered the command of opposing armies.

With the wounding of General Joseph E. Johnston at Seven Pines in May 1862, Lee was given command of the Army of Northern Virginia. Initially successful in a series of brilliant campaigns, Lee adopted a largely defensive strategy after a stunning defeat at Gettysburg in July 1863. From the Wilderness to Petersburg, he tried desperately to hold a much larger Union army at bay. Dislodged at Petersburg, his weakened forces surrendered to General Ulysses S. Grant's army at Appomattox on April 9, 1865.

General Lee returned to Richmond, but several months later he accepted the presidency of Washington College in Lexington, Virginia, which after his death was renamed Washington and Lee. He devoted the remaining five years of his life to education and the healing of old animosities, and he died, mourned both in the North and South, in October 1870.