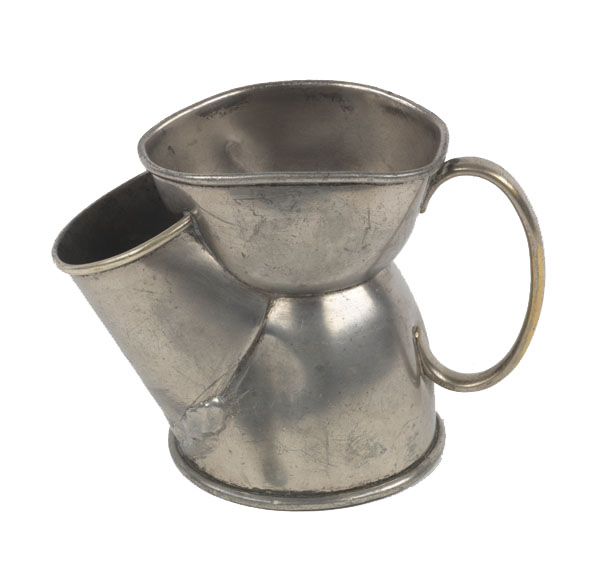 Before the invention of the disposable double-edged safety razor in 1895, a straight razor was the easiest, most comfortable method of shaving. Various devices were used to aid in the shaving process, like this pewter scuttle shaving mug ca.1870, shown at right. The mug itself would hold hot water, while the bowl at the top held a cake of shaving soap, which was lathered using the hot water and applied to the face with a brush. Shaving cream and the application of hot water to relax the hairs of the beard allowed for a closer shave.

High quality steel razors needed to be kept sharp and honed with a razor strap. The straight razors shown below are said to have been given to Washington, D.C., hotel proprietor Cyrus N. Martin by then-Secretary of War Jefferson Davis in the mid-1850s when he stayed at the hotel. Davis later became the president of the Confederate States of America. The razors are not matching, but both are made from high-quality steel with bone handles and notches on the ends of the blades. One of the razor handles is damascened and embossed with a "MILITARY" AND "RAZOR" flanking an emblem of military paraphernalia.

The razor strap and case shown in the slideshow below were made by Massachusetts craftsman Charles Emerson and found with a single suspender in a trunk in Richmond, Virginia, originally owned by Judge John White Nash (1792-1859). The case is labeled: "DIRECTIONS FOR USING EMERSON'S ELASTIC RAZOR STRAP / Which by its elastic power, is sure to act with regularity, and, by its peculiar property, revive the edge of your Razor.", followed by 6 lines of instructions and "MADE AND WARRANTED BY CHARLES EMERSON, SOUTH READING, (MASS.) The "strap" has a leathery texture on two sides with a flat wooden handle, and the case is a scabbard.